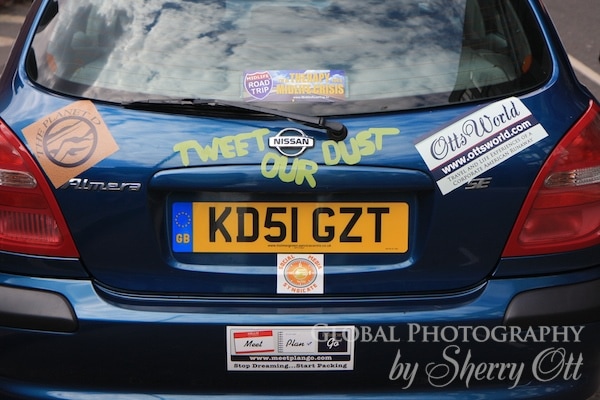 I had envisioned this for over a year.Â  A regular car with stickers all over it as if were NASCAR.Â  There’s something very liberating about doing what you are not supposed to do.Â  Plastering the perfectly good little car in stickers is normally against the rules, but in the Mongol Rally it’s expected!

In the middle of Central London, we were vandalizing our little Mongol Rally car and only one person who walked by actually asked what we were doing.Â  You gotta love big cities where everyone minds their own business.

Photos of us Pimpin’ Our Ride:

However when one of the men who parked near us was paying his parking meter looked at us in a questioning manner, I said to him, “We’ll be over to do your car next.”Â  I don’t think he was too amused.

We also gave packing a test run, and that wasn’t nearly as fun as placing the stickers on the car.Â  In fact, it was rather stressful.Â  The bags fit in like a complex jigsaw puzzle with not one extra room of space.Â  It doesn’t bode well for our long journey, but we’ll get through it somehow!

Thanks to all of our sponsors, we had fun placing all of your stickers! 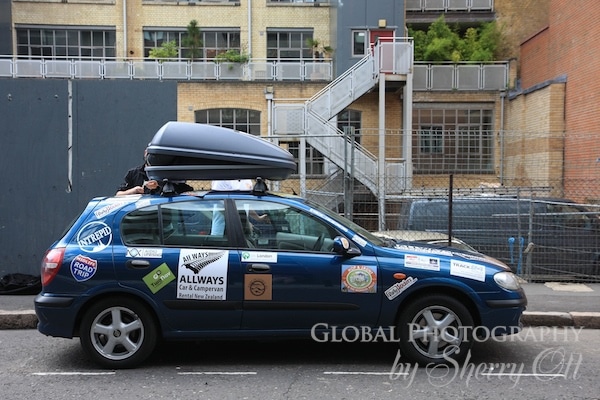 6 Responses to "Pimpin’ Our Ride"