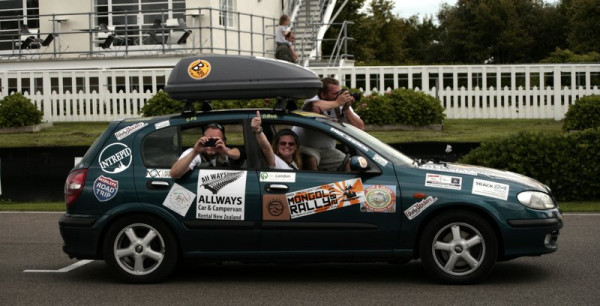 Last Saturday was the kickoff to the Mongol Rally; a moment I had been waiting a year+ for. We were stopping for final auto supplies and then going to participate in the big kick off party properly named The Festival of Slow at Goodwood race track. After seeing other cars pull up in the Halford Automotive parking lot, I knew right away that today was going to be the Festival of Anxiey for me.

These cars had 2 to 3 extra tires on the roof, 3 gerry cans for fuel, camping supplies, and what appeared to be way more room in their cars.Â  I looked at our little car packed to the roof without any spare space, our one spare tire and one gerry can and immediately wondered – are we going to make it?Â  Should have we brought more tires?Â  More gerry cans?Â  What does this team know that we don’t? Anxiety rushing in. Itâs one thing to plan with your team for a year and try your best to be prepared. But I wasnât prepared for seeing other teams for some reason. 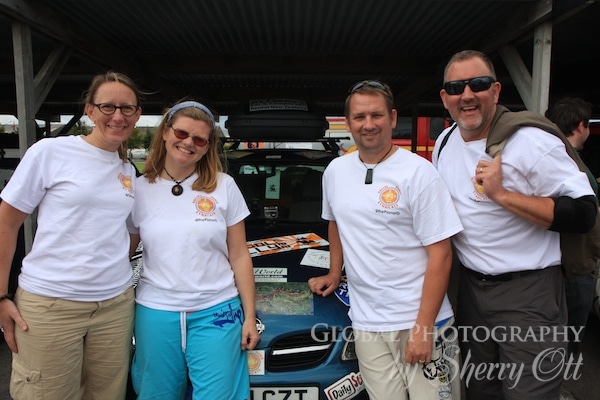 Our team (Me, Deb, Dave, Rick)…waiting in the paddocks

What do you do at the Festival of Slow?

The Festival of Slow at Goodwood raceway was a grand event that family, friends, ralliers, and angry Russians showed up for. Heck, the seldom seen sun even showed up a few moments!

The vehicles started parading in; ambulances, Smart cars, Fiats, Nissans, motorcycles, fire engines, and even a school bus and fuzzy purple car. The placed us in paddocks and allowed us to show off our lovely rally cars in their full glory. Some teams partied with beers and champagne, some put on their last minute stickers and conducted paint jobs, some set up patio furniture on top of their vehicles and observed the crowd, and some popped their hoods and did last minute fixes.

I walked around and took it all in â astonished at some teamâs creativity, ingenuity, and stupidity.

We Are Starting, But What Are Our Odds of Finishing?

This is the best these cars would ever lookâ¦a strange feeling as we were about to embark on our 10,000 mile journey. 320 teams showed up to disembark in their first grand slow lap around the Goodwood race track. This was a moment I would never forget as the crowd cheered us on. If I could only bottle all of the excitement and energy to be used at a later moment when we really need some energy.

As we get are ready to enter Mongolia I decided itâs best to share how lucky weâve been so far, and how lucky we have to be to finish this monster road trip.

So if I understand this right, we are a part of the 225 teams who made it the Mongolian borderâ¦yeah!Â  Now letâs just hope that we are part of the lucky 149 that are slotted to make it with their car to the finish line!

I had to stop myself from spiraling into a worrying abyss and tell myself to just enjoy the moment.Â  I don’t think there is any right or wrong formula for making it.Â  It’s all about luck.Â  Plus, I had the opportunity to chat with Dan from the Adventurists and he mentioned that the biggest mistake teams make is that they are over-prepared.Â  A wave of relief came over me…lords knows that we aren’t very well prepared, but we are ready. 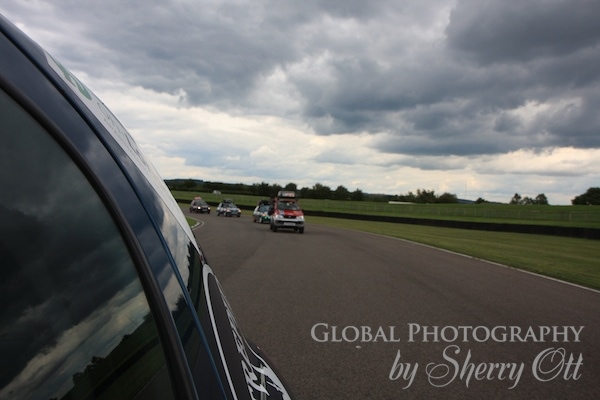 Our SLOW lap on the race track!

If you want to read more about the Festival of Slow – check out this great post about the Myths of the Mongol Rally by Mike Sowden.Â  I had the pleasure of meeting him at the rally kick off!