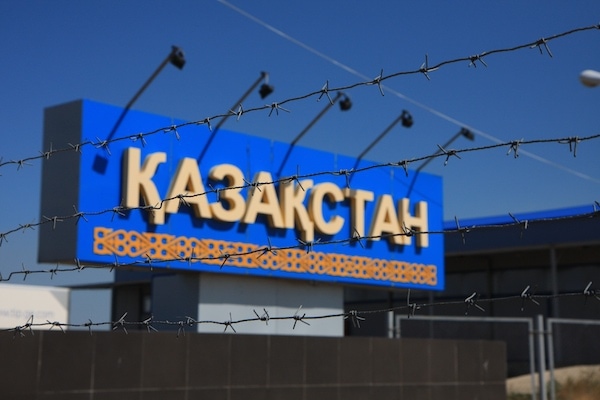 We made it from Russia to Kazakhstan, but first we had to cross a rickety pontoon bridge which was quite an adventure!
Then we abruptly pulled up to a huge line at the border.Â  It was 21 vehicles deep and not moving.Â  The sun was beating down on us, and we bought cold water from a local woman who embraced capitalism by catering to the cars/trucks in line.Â  Brilliant!
Knowing the process at the border and the line would take a while, we inflated all of our thermarest camping pads and used them as sun shields in our car which was quickly turning into an oven. We took down our camping stools, and sat in the shade of the semi in front of us, and waited. 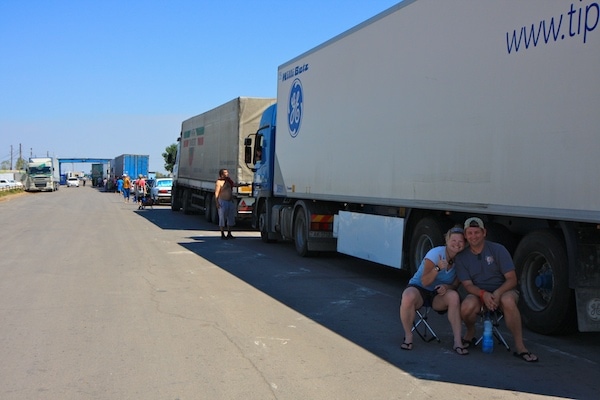 Getting out of Russia was surprisingly easy…if you don’t include the waiting.Â  The guards there told us “Good Luck.” in a stern Russian accent – did that meant we would need luck at the Kazak border?Â  After we left Russia, we had a long drive through no man’s land to Kazakhstan where we were put through the paces of forms, lines, wrong moves, and questions.
Fortunately, we once again were lucky and got through the process in about 2 1/2 hours without any bribes.Â  They bid us farewell with the common English phrase spoken at every border crossing we’ve been through, “Good luck.” But the Kazakh border guard was very interested in our walkie-talkie that we use for convoying.Â  Strangely, the team behind us, The Fighting Trousers, had to give up baby wipes to get their passage through the border! 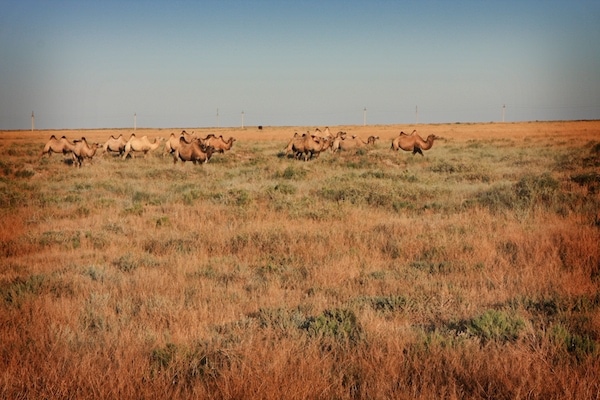 Some Mongol Rally teams gathered on the other side, rejoiced, and kept driving until sunset.Â  The bad roads slowed us down and we all pulled over among the camels and cows to set up camp alongside the road.Â  The SMS team feasted on bread, canned meat, and Nutella…since we hadn’t had a chance to get fuel for our camp stove yet!Â  The Amboriginals team (traveling in an ambulance) shared their beer with us – God bless them – and we had a great night hearing the story of how 2 of their 3 team members were drugged and robbed in Volgograd two nights before.Â  Joy. 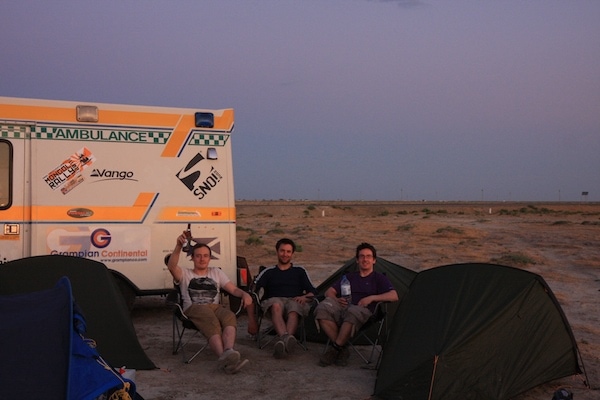 Oh, the Mongol Rally is never dull.Â  Let’s hope we continue to have “Good Luck!”
Learn how to follow us on our journey via social media
How to donate to our charity – the Christina Nobel Foundation – we are still collecting donations along the way!
This post brought to you by Cailin and Candice of Social Media Atlantic Canada. Check back in for more Mongol Rally stories!

8 Responses to "Good Luck at the Kazakhstan Border – Mongol Rally"