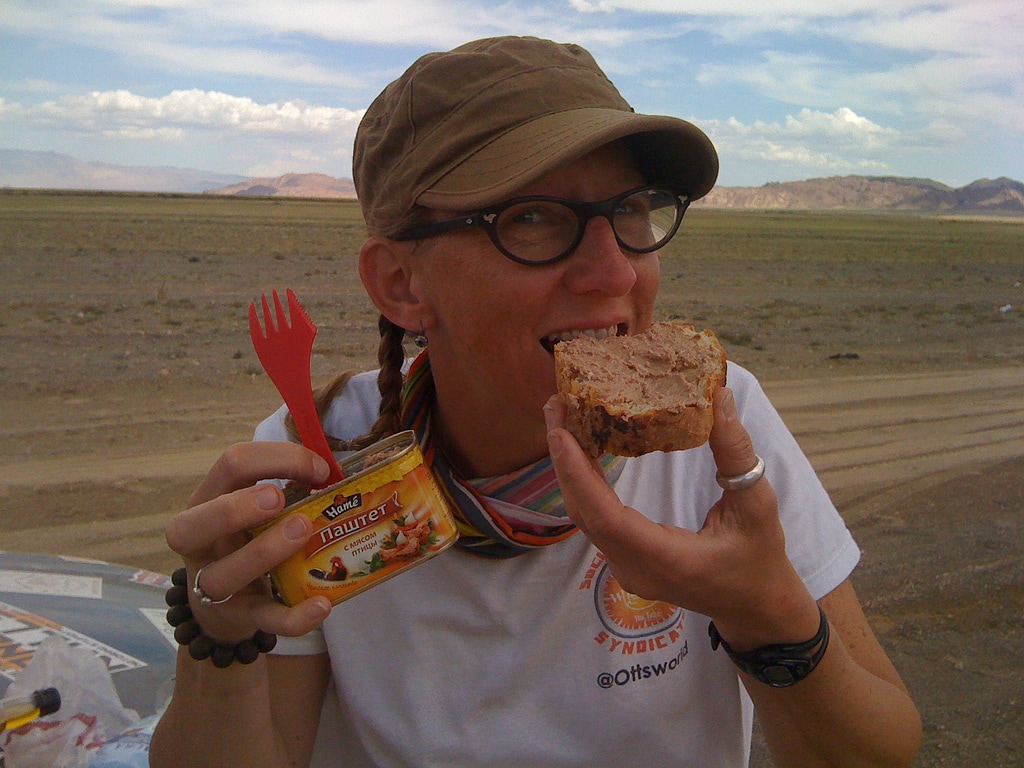 âIâm starving!â I said as the Russian waitress brings out the menu with the usual cold grimace on her face. I eagerly open up the menu so that I can find something to eat, my eyes focus on the words and then it hits my brain; I have no idea what this menu says.

The only food word I know in Russian is borsch; but Iâve eaten borsch for the last 2 days â I canât face another bowl of scantily clad cabbage soup. I decide to be daring; I will play menu Russian Roulette. I turn a couple of pages of the menu, shut my eyes and point as if Iâm pinning a tail on a donkey. My finger lands on the sticky, plastic menu page and I open my eyes. Looks like I will be having this: 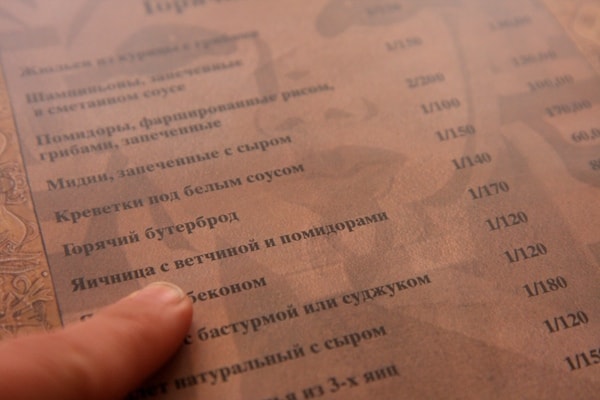 Living out of a car for 5 weeks poses some eating challenges. On top of it we were traveling through countries where there was very little tourism and English. My diet went to hell for the last 5 weeks, virtually no vegetables (except for the occasional shred of cabbage in borsch), and very heavy on junk food and carbs. During the 5 weeks all of the skin started peeling off of my fingertips and hands; I blamed it on my awful diet and poor nutrition. 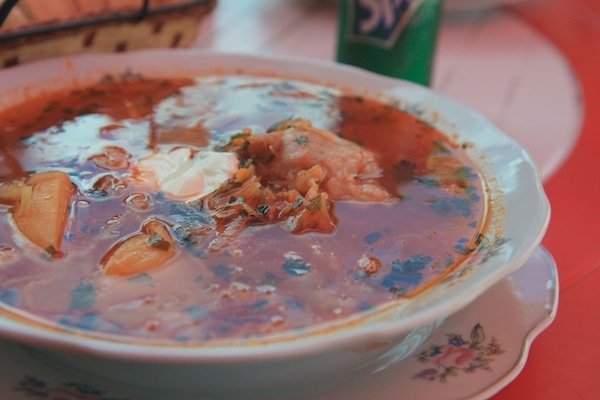 Our first of many bowls of borsch

We started out in our Oh London apartment pretty well fed. We had access to grocery stores near our apartment and cooked up feasts that were well balanced. We bought cooking staples such as salt, olive oil, balsamic vinegar, and pepper that would end up lasting us all the way until Ulaanbaatar. They were a great investment for camping and roadside lunches. 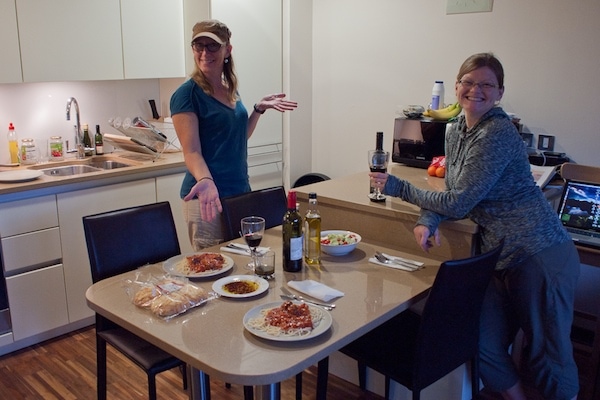 Living the good life at our Oh London! apartment

Next we were absolutely spoiled in Belgium and Germany where our travel blogging friends, Cheeseweb and TravelDudes, hosted us to beds and absolute feasts of cheese, pasta, salad, beer, and wine. 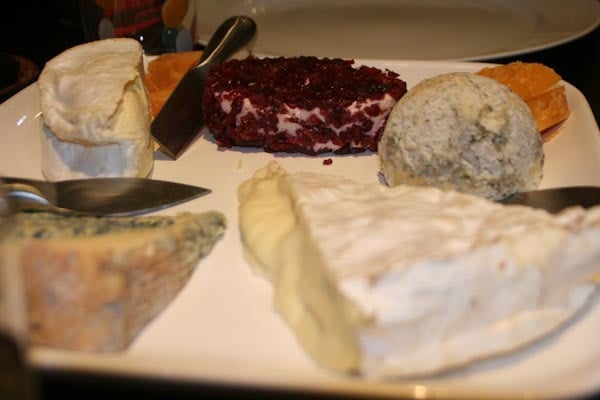 Cheese plate from Cheeseweb of course! 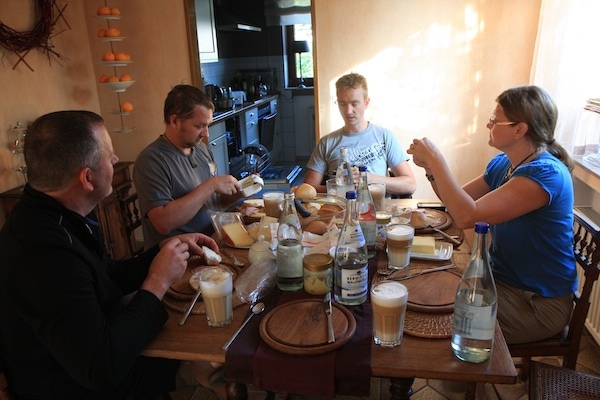 We are not ashamed. We are full time bloggers and we need internetâ¦and sometimes we need a Big Mac to go along with that internet! Throughout Europe and into Romania we utilized McDonalds to get wifi connections and for food. I doubt we would have stopped there as often if it werenât for the wifi â but a hot fudge sundae on a hot August day is always a treat!

We had run out of McDonalds and friends so we started to our camping portion of the trip. Dave and Deb had great supplies for cooking. With a small, ultra light burner for cooking, 2 pots, and some sporks an outdoor feast was created! The markets were quite limited in Central Asia, but we would stop at grocery stores and purchase pastas and sauce, rice dishes, canned meat (which pretty much smelled like cat foodâ¦but when you are hungry â you eat it.), eggs, oatmeal, bread, tomatoes, and spreadable cheese. While in Kazakhstan of all places we even found peanut butter â which provided weeks of sandwiches and sanity for us! At this point though the only vegetables we were getting were tomatoes and an occasional jar of mushrooms. We had virtually no dairy except Happy Cow spreadable cheese. However while camping in Mongolia we experienced local hospitality quite often when local herder families would bring us hard goat cheese that could crack teeth. One morning a young boy brought us a bottle of fermented mares milk. Thereâs nothing quite like drinking fermented mareâs milk at 9AM. It certainly adds some zip to your cereal. 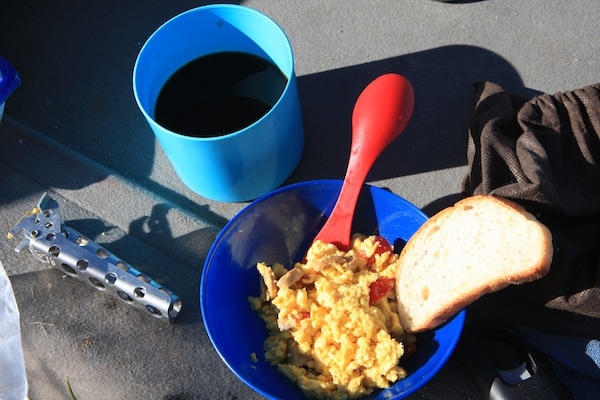 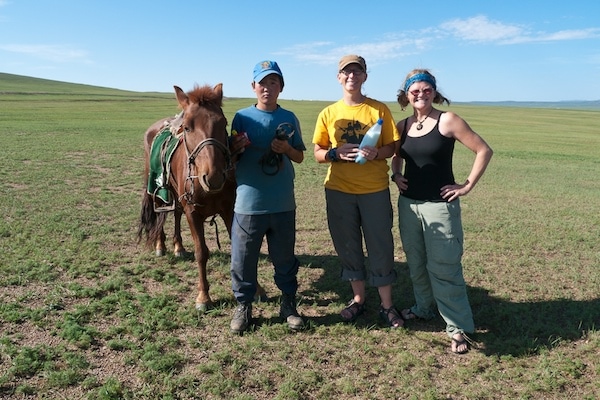 Our young visitor bringing us a bottle of airag 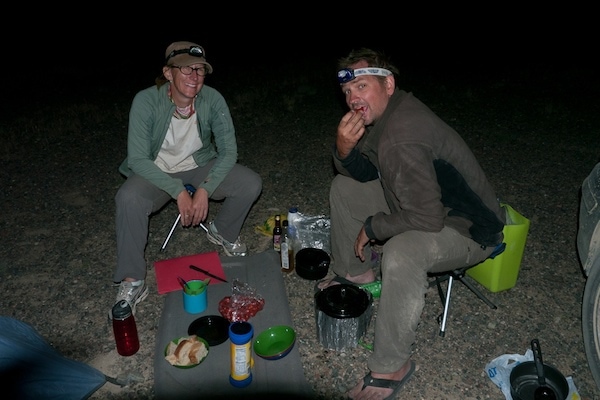 Camping dinner with Dave and his little camp stove

We ate in the car and on the car. Tomato and cheese on bread was the most common âmealâ. However, most days we never stopped for lunch. Instead we would eat horrible junk food that we could buy at gas stations. I consumed more chips and candy bars in 5 weeks than I have in my entire adulthood! Chip flavors are always interesting in other parts of the world â we became chip flavor critics. For the record we donât recommend the fish egg flavor! Suckers also saved my life most days. They helped deal with the boredom, dry climate, and dust. Sitting on our asses in a car for 8 to 10 hours a day and eating chips, suckers, and Snickers bars probably isnât the best life choice â but it kept us from having low blood sugar melt downs in the car. 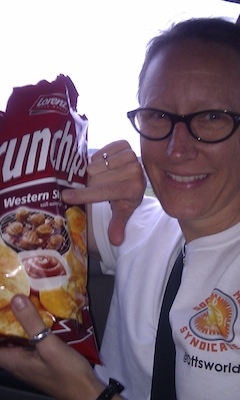 We actually ate at very few restaurants â mainly because it was so difficult to order once we reached Russia and Central Asia. There were only 3 times we actually had English on a menu â Barnaul Russia, Atrau Kazakhstan, and Kostanai Kazakhstan. We also found a German restaurant in Kazakhstan where we attempted to order sausage by miming the word sausage (use your imagination), and we received boiled hot dogs. There were virtually no restaurants in Mongolia along our route. However we did find a Seoul restaurant in the little village of Altai which had pictures on their menu. They served Korean food and sushi â yes sushi in the Gobi desert – talk about daring. But the waitress looked at us like we were insane when we asked for soy sauce! 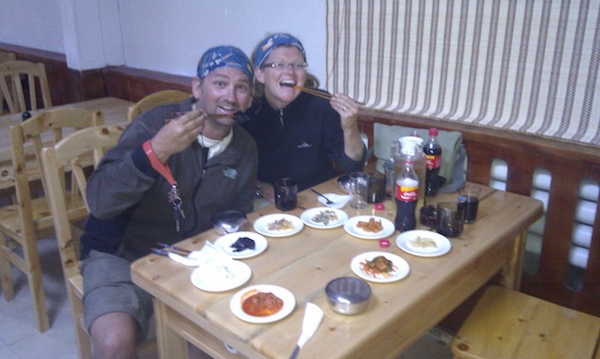 Eating and finding food is all part of the adventure in the Mongol Rally! Bon Appetite!

11 Responses to "The Mongol Rally Diet"