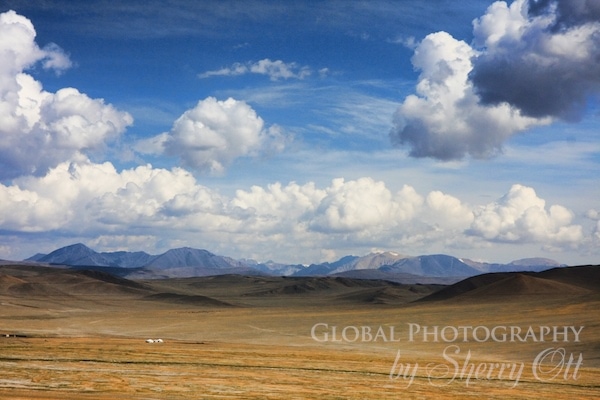 At 11AM a border guard walks across the parking lot carrying passports and some forms, looking official with a stern look on his face. All of the teams perk up, and eyes follow the officialâs every move; each wondering who will get the ticket to freedom. The official doesnât say a word, scans the license plates on the cars until his eyes rest on one.

Twenty-four hours after arriving at the Russia/Mongolia border, the Hot Box just gained itâs freedom! The official hands over the paperwork and passport to Dave and we all rejoice; these are the documents we need to bring the car into Mongolia. Weâve just been granted access into the least densely populated country in the world!

We bid goodbye to the rest of the teams knowing that we will see them along the route again shortly and take off following the Carry On To Mongolia team past the gates and into Western Mongolia.

A wave of relief came over meâ¦we were in; this was a huge accomplishment. From this point on there were drop off points for the cars that didnât make it and mechanics that Mongol Rally teams could try to work with. There were only a few route options, so it all of a sudden felt somewhat easy. There were no more decisions to make, no more what ifâs; it was our last country and all roads led to Ulaanbaatar.

Then the car jerked, swerved, and bounced reminding me the challenge was far from over. The challenge now was not directions, routes, or corrupt officialsâ¦it was the roads â or lack thereof. Mongolia was ready to chew up and spit out these little cars â I felt it was hungry and eying our little car as if it might be a nice appetizer to be followed by a bigger ambulance coming behind us, and maybe a little motorcycle for dessert.

We drove into the grand landscapes of Western Mongolia headed towards the town of Olgii. Some snow still clung onto the peaks and I had to remind myself that it was late August. The mountains seemed to dwarf the livestock which appeared as little dots on the hills. As we drove by, herders and kids would notice us and come running or galloping towards us waving. It was as if everyone was welcoming us to this Kazakhstani airmag (district). 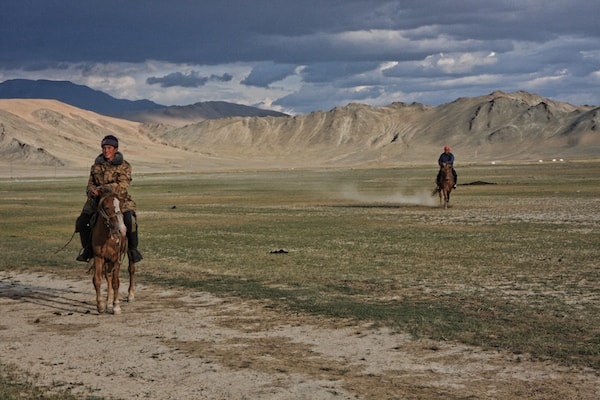 Locals run up to meet us 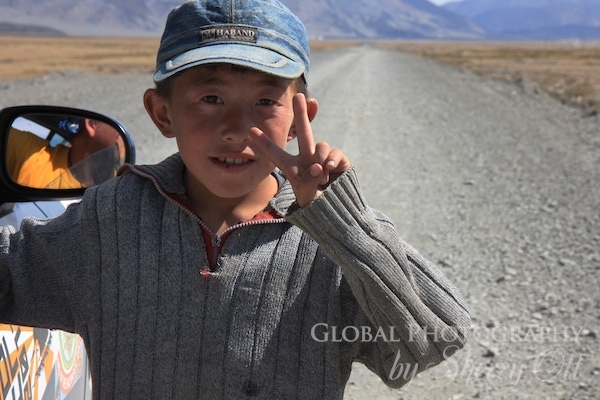 Young boy eager to meet us as we drove by

Even the dirt was excited to see us â it seeped in every crack and vent of the car and started the process of coating the car and us in a constant chalky dust. For as long as I live the smell and taste of fine dirt will remind me of the Mongol Rally.

In the distance we could see the first casualty â the team Carry On To Mongolia was stopped in the middle of the road with the hood up. My heart sunk as we pulled up to them since I knew that our little mechanically inept team would be of little help to them. However they didnât need us. They were too busy ripping out the backseat and trying to get to the fuel pump. This was a team of engineers from Australia and the UK; they were in their element. We instead just gave them words of encouragement and took video and photos since thatâs what we do best! Soon other teams started to appear on the scene everyone with various levels of mechanical knowledge – but all more than us! 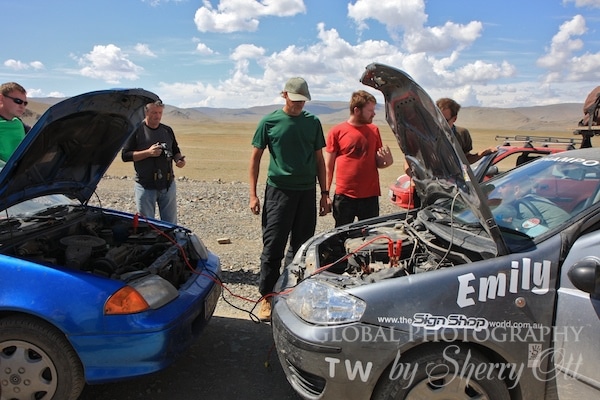 It was a humbling process to see how everyone pitched in and tried to solve the problem. Parts under the hood were removed surgically until they determine that the fuel pump was indeed busted. Another team would need to tow them over the mountains and to the little town of Olgii where they could get mechanical help.

Since we were unable to help in the towing department we continued to move forward and knew that we would see them again in the next town. We pushed on past Olgii after picking up a few crucial camping supplies. I stopped to âtalkâ to a family who was packing up their ger and moving for the season. A big truck piled high with all of their possessions and 7 of them to fit into the cab. Vehicles packed over capacity were a typical sight in Mongolia. 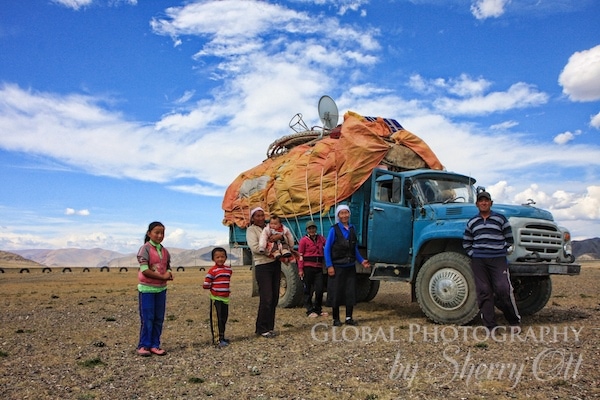 The skies darkened and you could see storms in the distance and we continue d to push forward. Then in a split second our road seemed to disappear before our eyes. Our little dirt path had simply ended. We were all dumbfounded. We started backtracking, criss-crossing the valley to try to find tracks again that led towards the town we could see in the distance. So close â but oh so far. 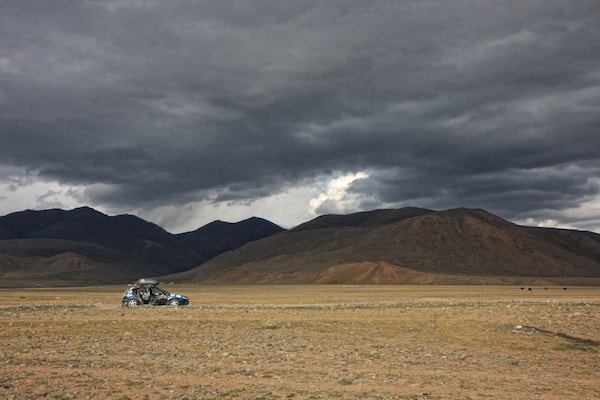 This is the point where we started the very important process of asking for help from locals; a must if you are going to drive through Mongolia! We asked construction workers, herders, and kids â slowly finding our way closer to the town. Finally in the town we stopped and asked for more directions towards Khovd. A guy on a motorcycle indicated he was driving to Khovd and we should follow him! We followed as long as we could keep up with the nimble motorcycle and as the sun went down we found a great little camping spot near a stream. 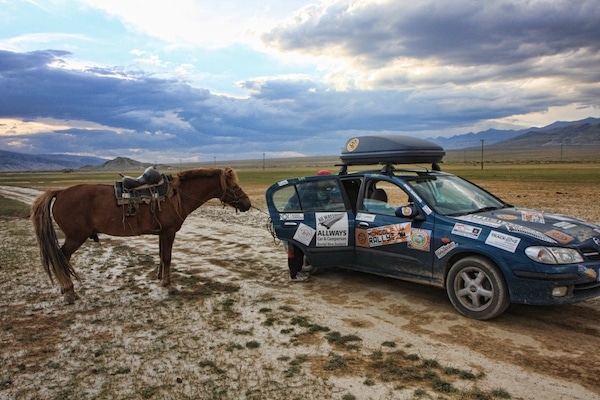 We asked everyone for directions...even the horses

As we made dinner that night in the dark, a pack of wild horses ran by our camp startling us. A big grin came across my face as I thought – where else could this ever happen in the world other then Mongolia? Mongolia is all about freedom. We gained our freedom from the border today and now were running wild like the horses. We have made it to our final country â and what an amazing country it is. 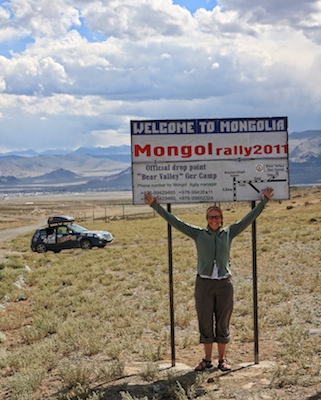