Bad Things do Happen on the Mongol Rally 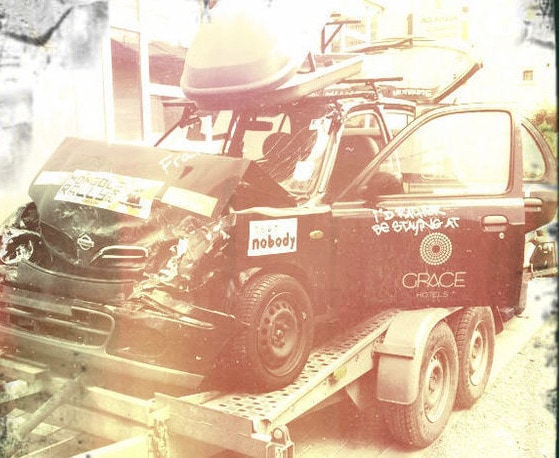 By the time this post goes live, Iâm hoping that I will be close to entering Mongolia.Â Â I feel (and hope) itâs at this point I can breath a small sigh of relief.Â Â As weâve traveled through Europe and Central Asia, Iâve been slightly on edge because driving a car through these parts of the world as foreigners is probably not the safest thing to do.Â Â There are many things that can go wrong such as driving accidents, theft, and various forms of corruption.Â Â Iâm not saying that Mongolia doesnât have these thingsâ¦it certainly does, especially in Ulaanbaatar, but for some reason I feel safer in Mongolia.
As we have driven through Romania, Russia, Ukraine, and Kazakhstan Iâm very aware of how we are an easy target; we stick out in our stickered UK car like Mickey Mouse in the desert.Â Â However, Iâd like to think that we take precautions and have traveled really smartly.Â Â Yet I also know thatÂ Â a little luck is always involved too.
Other teams have not had such luck.
Within the first week of the rally a team nearly had a fatal accident in Romania â more on the story here.Â It wasnât their fault â it was the fault of a crazy driver, driving the wrong way.Â Â Considering the amount of booze I see sold at all times of day in these countries and how there are seemingly no restrictions regarding the sale of booze and driving, this doesnât surprise me.Â In fact weâve learned that gas stations are one of the best places to buy a cold beer.Â Â This team was really lucky they survived.Â Â Other teams have not been so lucky.Â Â Granted â I absolutely know that accidents can happen anywhere; they are most likely to happen in your home country driving to work.Â Â But there is some increased risk you take by driving in foreign countries with a UK right hand drive car where you canât even read the signs. 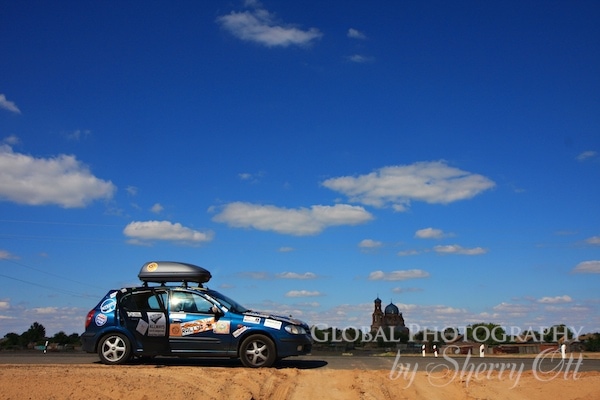 We also met a team of guys from Scotland driving an ambulance called the Amboriginals who ran into a bit of bad luck in Volgograd, Russia.Â Â We actually saw them at the pizza restaurant that many rally teams had gathered at in Volgograd city center.Â Â We were on our way home and they were just sitting down having a beer.Â Â We had hung out with them before and they were well traveled, cool guys.Â We later learned that the night took a terrible turn for them.Â Â They went out to a club later that night and were drugged, taken out into the woods, and robbed.Â  They came to the next morning beaten up and broke.Â  Once again â this can happen ANYWHERE, not just on the rallyÂ Â – but with lots of partying ralliers in town, Iâm sure the local thugs are thinking itâs easy pickings.Â Â The amazing thing to me is these guys were shook up about the whole experience, but they kept going.Â Â They had been drugged with roofies and couldnât really remember anything, but they were determined to move on. 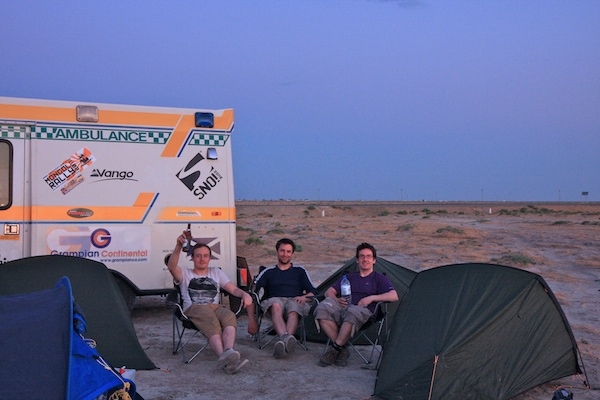 Then thereâs also simply the bad momentsâ¦and yes â in a small car with 4 people there can be bad moments.Â Â We drive all day in hot conditions and usually on poor roads.Â Â Personalities can clash out of frustration.Â Â Moods can swing.Â Â Lord knows that my mood changes with my hunger pains.Â Â But I think weâve done a pretty good job of working out any issues and normally they are just a passing wave of bad mood.
I waited to do this post until I felt like we were out of the real dangers so that my mother wouldnât freak out.Â Â However â there is danger everywhere â itâs not simply associated with the Mongol Rally.Â Â I donât know what we have in front of us, but I hope our luck sticks around for another 10 days!
Learn how to follow us on our journey via social media
How toÂ donate to our charity – the Christina Nobel Foundation – we are still collecting donations along the way!
This post brought to you by Cailin and Candice ofÂ Social Media Atlantic Canada. Check back in for more Mongol Rally stories!

One Response to "Bad Things do Happen on the Mongol Rally"