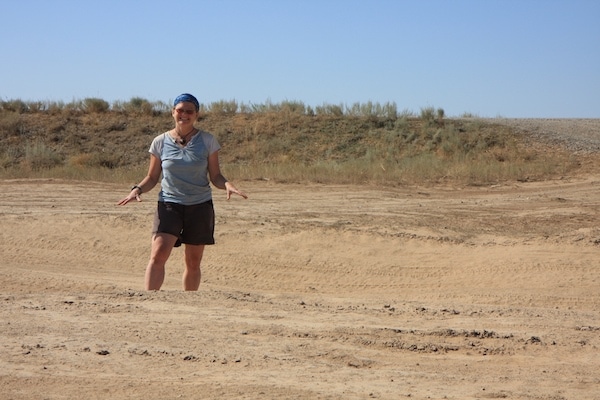 I don’t think any Mongol Rally team has actually made a plan and stuck to it.Â  The rally throws you too many curve balls to be able to do that.
We had our first curve ball in Kazakhstan…it was called time.Â  We drove into Aktobe on considerably better roads.Â  At one point, they even had center lines painted on them…fancy for Kazakhstan.Â  As we drove through town, everyone looked at us.Â  People at stop lights wanted to talk to us.Â  One guy even gave us a key chain present while driving down the road.Â  Clearly, this town doesn’t get many tourists from North America!
We found a fancy cafe to sit, eat, and examine our plan.Â  We walked in, caked in dirt, and all promptly went to the bathroom to take a sink bath.Â  We unfolded the map and considered the date.Â  There would be no way we’d make our original itinerary in time for Dave and Deb’s Mongolia visa to be used.Â  Thanks to paperwork delays and bad roads, we were about 3 days behind schedule already.Â  With the horrible conditions of the roads in Kazakhstan, we had to have make a new plan.
It was a tough call – but we decided that we would need to stay in Kazakhstan instead of dipping down into Uzbekistan.Â  As Dave said, “With a heavy heart I know that we have to stay North.” None of us were thrilled about it; we would have to skip Uzbekistan and Kyrgyzstan.Â  However, we decided we’d make the best of the plan change by trying to take more time in places, not push so hard, and really try to enjoy ourselves instead of feeling pressured to keep on an impossible schedule. 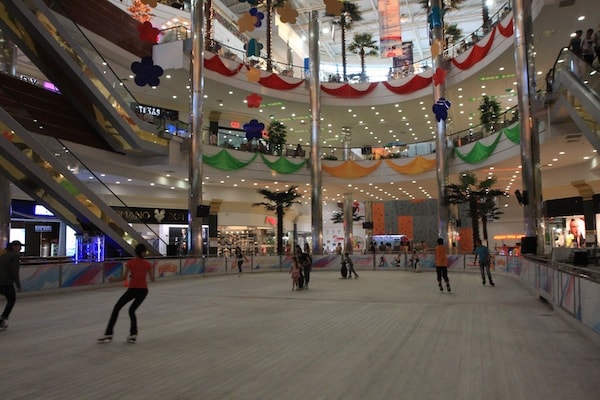 The ice rink at the Mega Mall

We found a hotel in Aktobe and decided to take the opportunity to shower and clean up after 3 days of camping and dust.Â  We went out and all enjoyed a beer and sushi at the ultra-modern and surprising Mega Mall.Â  They even had an ice skating rink in the mall: the last thing I ever expected to see in the summer in Kazakhstan!Â  Everyone stared at us wondering what we were doing in their country.Â  And most everyone would get up the nerve to come ask us how we liked Kazakhstan.Â  We gave them the ‘thumbs up’ as long as they didn’t ask about the roads!
We shared a cold Russian beer and ate Salmon skin appetizers, and then all tried to come to grips with the fact that we wouldn’t be going the route we initially chose.Â  But – there’s always a bright side – this would leave us more time in Mongolia and after all – I have to leave some of the Stans to come back to one day… 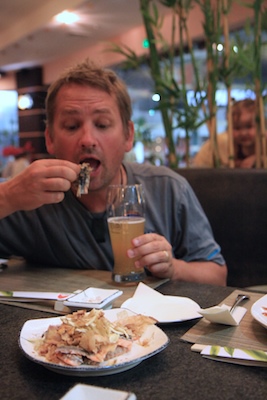 Learn how to follow us on our journey via social media
How toÂ donate to our charity – the Christina Nobel Foundation – we are still collecting donations along the way!
This post brought to you by Cailin and Candice ofÂ Social Media Atlantic Canada. Check back in for more Mongol Rally stories!