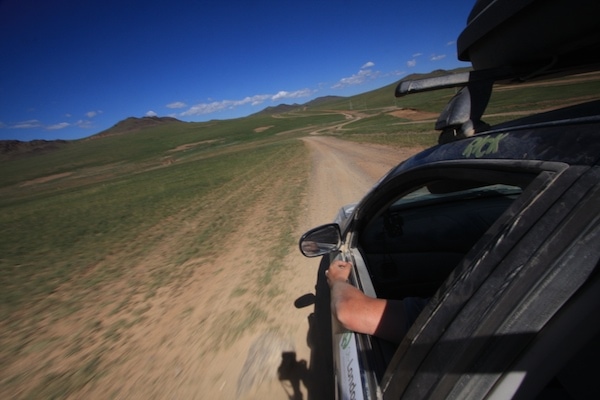 It's like your own personal video game when driving through Mongolia

We get in the car, adjust the seat so that the pedal distance is just right, buckle up, and put two quarters in the slot. I choose 3 players, level of difficulty, my route, start the engine, hear the rumble of a muffler-less rally car, and Iâm offâ¦as if Iâm in a video game.

Driving in Mongolia has been the highlight of the trip for me. Iâm not one that even really likes video games, but for me driving through western and central Mongolia is the ultimate video game.

When you are driving you are faced with constant decisions; mainly – which road do I take? In fact I have a hard time called them roads in Mongolia â they are more like paths and they spread out like tendrils of a complex spiderweb. You canât drive very far before you are faced with a decision of left or right? But you are forced to make that decision in a split second as you are going 30 mph. It never fails, as soon as you decide to take the left tendril, you begin to beat yourself up because you think the right would have been a better choice! Truth is â they were all pretty much the sameâ¦full of holes, bumps, divots, dips, and sharp rocksâ¦sometimes bolders. 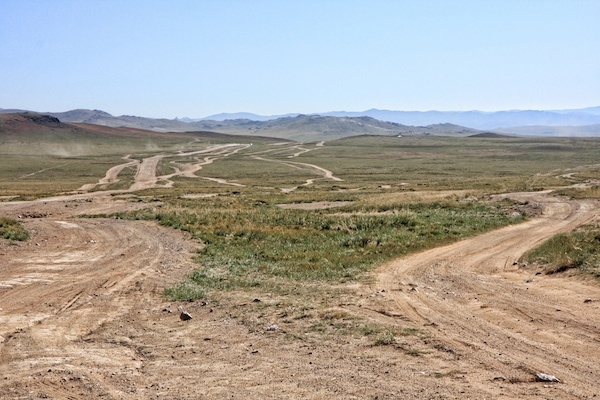 When driving you can do absolutely nothing else; there is nothing relaxing about it. You are on watch, constantly. When I drove I couldnât look around me at the landscape because my eyes were constantly scanning for pitfalls about 20 ft. in front of me. I honestly could barely even have a conversation with Dave or Deb when driving as I was unable to multitask with my brain so focused on the ever-changing road that lie ahead of me. In fact, I would realize that I would forget to blink I was concentrating so hard which made eye drops a necessity. Many times we reverted to âgroup watchâ; the other person in the front seat would be responsible for the road on the left side of the car and tire and would call out potholes and big rocks. 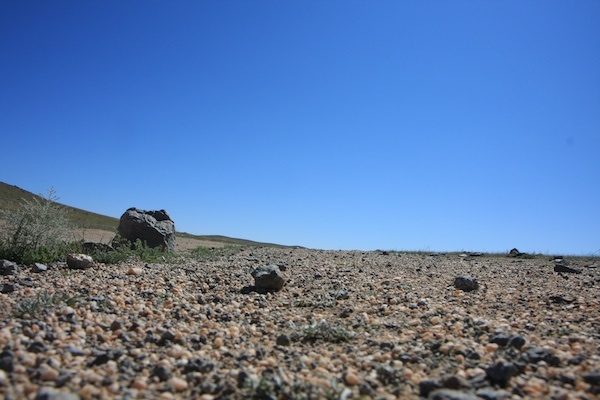 Jagged rocks are the most dangerous for our bald tires!

Most days we never got out of 3rd gear when driving in Mongolia. The moment you would get up any speed on a good patch of âroadâ, youâd have to slam on the brakes to avoid falling in a crevice that would certainly engulf your car and spit out your shocks or tire. It had actually been 3 days since we had used 5th gear at one point. Dave exclaimed that it excited him and frightened him at the same time! 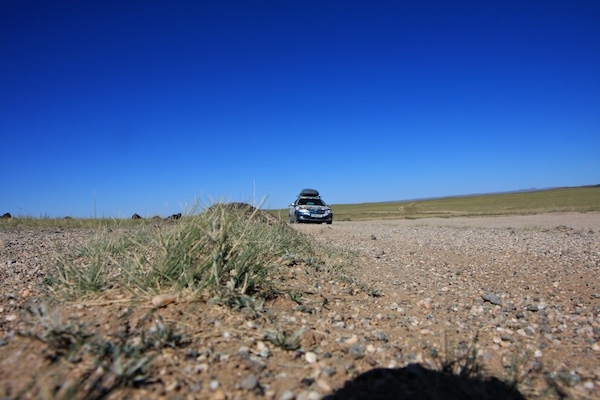 Most of the time I had visions of the Dukes of Hazard in my head as I drove. I felt like I was constantly moving the steering wheel; yet this wasnât for a TV effect, it was to avoid pitfalls! They say to be a safe driver that you should have your hands at 9 oâclock and 3 oâclock, but that was impossible as so much downshifting was necessary that I could only have one hand on the steering wheel and the other had to be on the shifter. The driving was a constant process of stops and start which required a lot of shifting and concentration.Â  I realized that I had been gripping the steering wheel so hard out of stress that I started to get callouses on my hands! 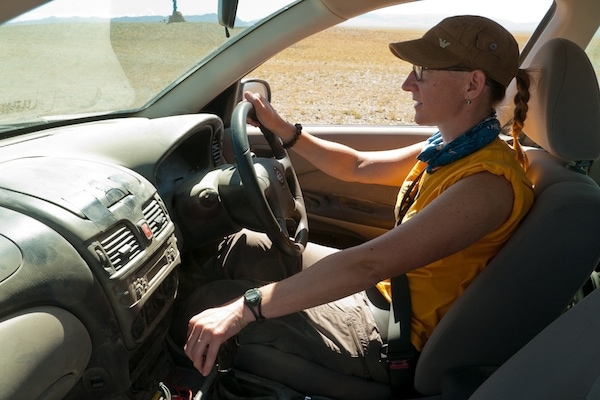 Me behind the wheel - gripping the steering wheel and downshifting...

Driving in Mongolia in an inappropriate car with low clearance was the ultimate adrenaline rush. Who needs video games when you have the real thing?

Where was the hardest place you’ve ever driven in the world?

7 Responses to "Driving in Mongolia"