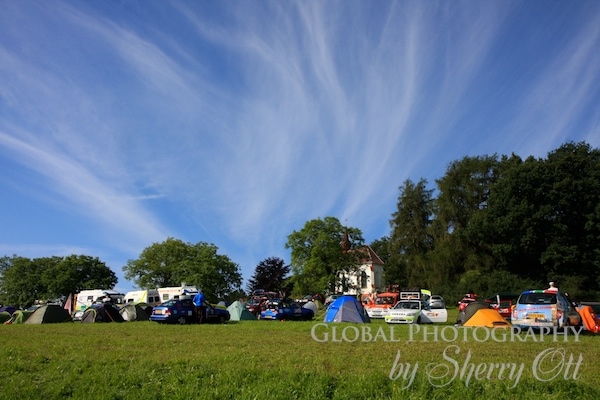 The Mongol Rally campsite for the Czechout party

It finally came…no more being hosted by generous bloggers and big spreads of food and drink.Â  We are slowly driving out of our ‘area of online friends’ and into the unknown.Â  This would be the first time we needed to break out the camping gear for the team as we were headed for the European kick off of the Mongol Rally. The European Mongol Rally launch and the ‘legendary Czechout’ party take place in the depths of Bohemia in a huge medieval castle. It’s where the teams from all the corners of Europe to gather to celebrate the begining of their Mongol Rally adventure, joined by those (like us) who set forth from the UK to welcome the new Euro-brethren into the belly of the Rally.

After getting stopped by the cops in Germany and trying to revive my iphone, we were a bit behind schedule so had to eat our dinner in the car…the first of many dinners in our laps.

We arrived right before the sun went down and started setting up camp.Â  The field was filled with other teams and cars – it was a massively fun site to see!Â  Once again you could interact with other teams and see the gear they brought…or didn’t bring.Â  However there were many teams with some really tricked out camping gear and spots.Â  Mental note…we need to make friends with them.

Our little campsite with car parked close by!

The only problem with camping is that it was COLD.Â  I wasn’t expecting to be able to see my breath in July!Â  We had to dig out all of our warmest close already.Â  I hadn’t anticipated needing those until Mongolia.Â  Once the tents were set up we went off to check out the Czechout party.Â  The theme was Arabian Nights – and Dave and Deb were the only ones who had something packed along that could really work for the theme – their Bedouin scarves from their recent trip to Jordan. 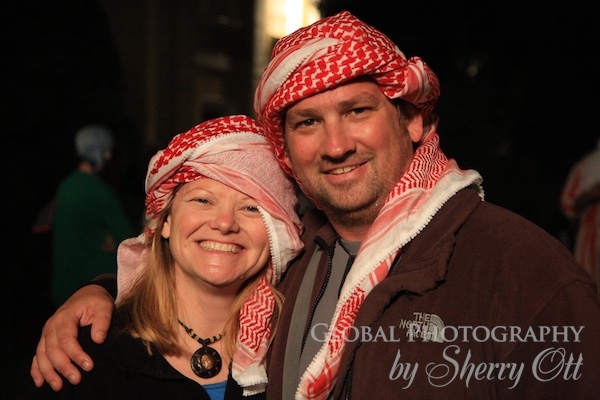 Deb and Dave are dressed for the party

The party was a huge drunk fest with a great live band and lots of beer bongs.Â  I had flashbacks of my college days, but decided it was better to simply watch the craziness rather than partake to the extent that many teams were.Â  I really didn’t want the hangover in the car the next day; I guess that means I AM getting old!Â  We met a few other teams, but I hardly think they will remember us the next day. 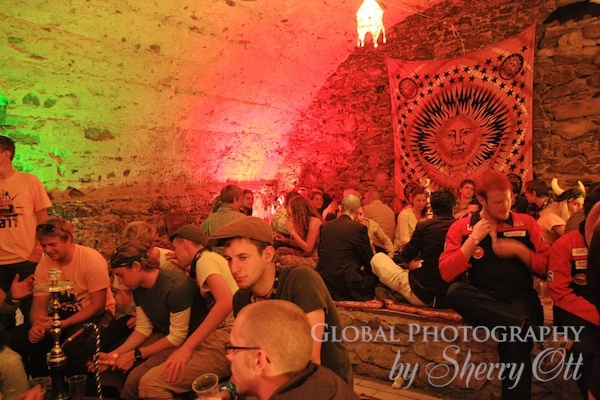 One of the shisha rooms at the party. This was pretty tame, but the shenanigans outside was another story!

The next morning we were up and out to Prague bright and early.Â  No hangover, no headache…but somehow I had caught the beginnings of a cold.Â  I bet my teammates were thrilled about being shut up in a small car with me hacking for hours.Â  They may be kicking me out soon!