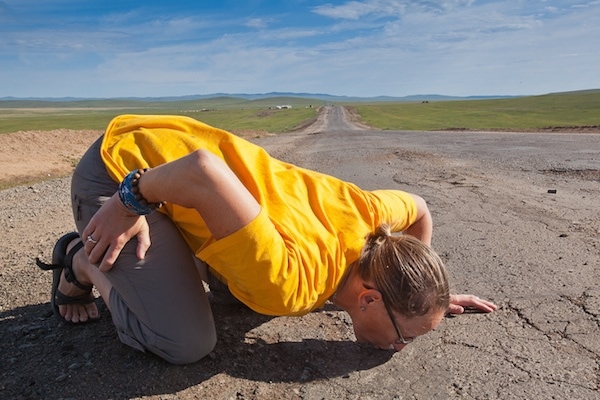 âWhatâs that smell?â asked Deb.
âI donât know, but I smell it too.â said Dave.
âI donât smell a thing.â I said from the back seat.

We stopped to investigate under the car and the hood. We had already had a tire repaired again today in a little ger truck stopâ¦but now we had only driven about 20km further and we were perplexed by the odd odor coming from our car.

We looked under the car and saw a dark fluid running down the inside of the tire well on one sideâ¦ahâ¦we definitely have a problem. Like first year med students we started to try to diagnose the issue. Our first thought was brake fluid was leaking and that we had hose had pulled off or had ruptured.

Dave took off the wheel yet again and ruled the brake diagnosis out. 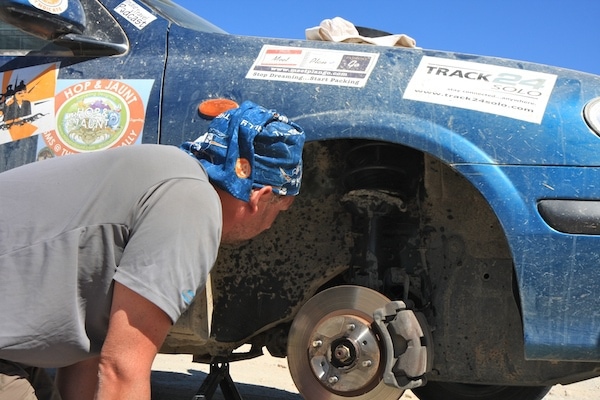 We never really could tell, but we were 90% sure that our front shock had ruptured and the fluid we saw was the hydraulic fluid leaking out.

None of us knew much about cars, but we knew this:

The engine still ran great.
There were no warning lights coming on.
We had been driving on this for a while.
About every other team we met had broken shocks or springs.

From all of thisâ¦we deducted that we could go on, albeit at a slower more careful pace, to the next town and have it looked at there. We all felt quite confident about the diagnosis so we continued to move towards Arvaikheer â the last town before Ulaanbaatar.

Unfortunately, this was some of the worst road of the rally when it came to bumps, dips, ruts, rocks, and holes. But Deb babied the car perfectly through the landmines and the car bounced and creaked more than normal, but it was making it. That was all that mattered!

We had heard a rumor that all of us wanted to believe, but were careful not to get our hopes too high. The rumor was that just outside of Arvaikheer tarmac appeared and continued the remaining 431km to Ulaanbaatar.

It felt like the day lasted forever at our slow pace and anticipation of tarmac. We met some other teams along the way also inching along on the horrible roads. They too had heard the rumorâ¦so we got even more excited.

I was surprised to meet an all female team that day, Dotty and the Dice. I loved hearing their stories of how two women who knew nothing about cars had made it this far. My heros! 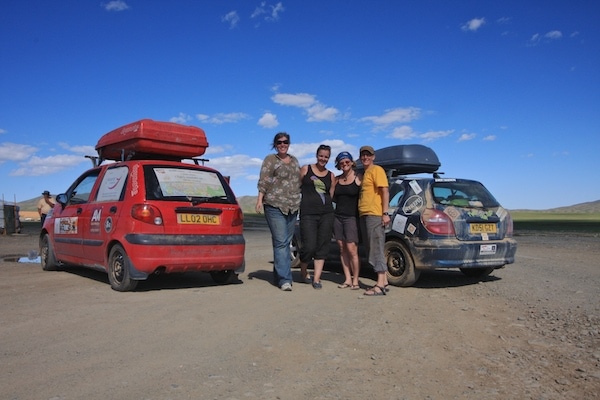 We followed them into Arvaikheer on beautiful new, dark, flat tarmac the last 15 km. Joy!

We stopped at the Mongol Rally mechanic to enquire about our busted shock. However since we had made it this far already â we were feeling a bit skeptical about fixing it. We certainly didnât want to spend a bunch of money to fix it the last day. But like any mechanic around the world the guy of course could not guarantee that the spring would hold and if it broke, that might be dangerous. The price of a new shock was $80 â which seemed to be quite expensive for Mongolia considering we had flat tires fixed for $4. Dilemma.

We did what any mechanically lost team would do; we called Debâs dad and asked his opinion! He was a bit surprised to be getting a call from Mongolia, but was excited to help us in our mechanical dilemma. His diagnosis was that we could drive on the broken shock and simply continue to be careful to not break the spring and we should be fine.

Plus, we had confirmed that the rest of the way was indeed tarmac all the way into Ulaanbaator â so we felt that if we had made it all day on horrible roads so far, we should be able to make it into UB. 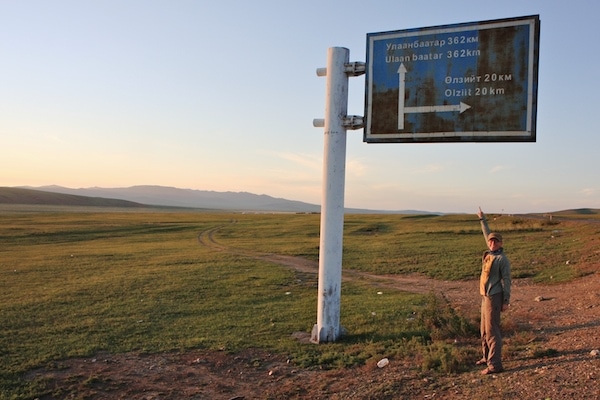 Point us towards Ulaanbaatar!!

The excitement was building inside the car as we took off and drove every kilometer closer. Yet we knew that we wouldnât make it the whole 430km before the sun went down, so we drove as far as we could and camped one last time with visions of the finish line in our head!