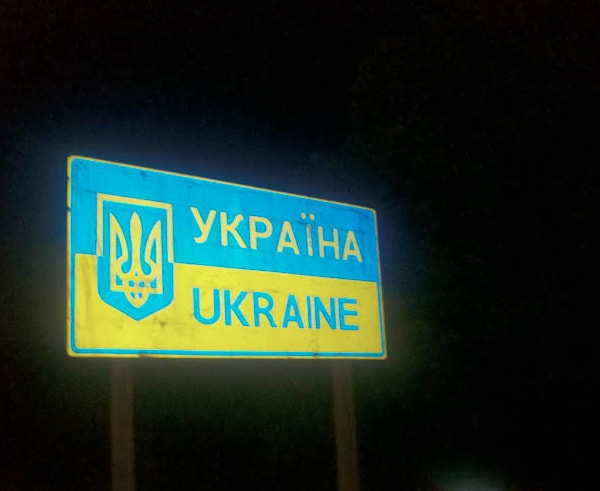 "Welcome to Ukraine, for a small bribe we will let you in!" --via Rick Griffin

We unpacked the whole car in the McDonald’s parking lot only to repack it all up again.Â  We had to prepare –Â  prepare for our first border crossing into the ‘wild East’; Eastern Europe that is.Â  We moved electronics into secure places, I hid my cash in my feminine products such as myÂ  tampon bag and my Diva Cup.Â  We all stealthily planned how much cash to keep, where to hide electronics so that we wouldn’t scream money.Â  We called it “Operation Downgrade”.Â  This was all done in hopes that when passing through the borders we wouldn’t look like an easy target to extract money from.Â  Now we would put this to the test for the first time as we passed through not one, but two borders – Romania to Moldova, and Moldova to Ukraine.

This border crossing in southern Romania was probably not used very often by westerners taking a road trip, so it was hard not to stick out.Â  We pulled to the border crossing line and were sandwiched in between huge, shiny SUV’sÂ  with engines turned off and people mulling around outside of their cars.Â  We settled in for a long wait. 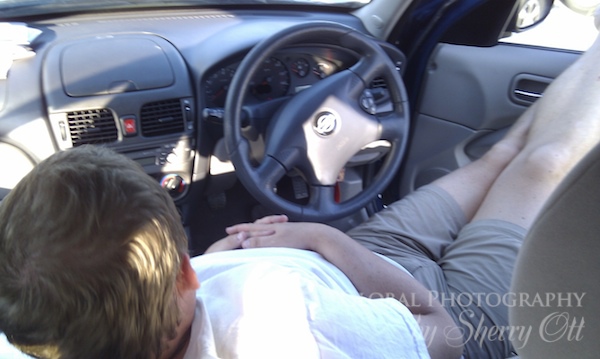 Dave taking a nap while we wait in line

A Romanian man suddenly came to our car and told us under his breath that we were in the wrong line.Â  The line we were in was ‘unofficially’ the Russian and Ukrainian mafia line, he advised us to move to the EU line.Â  He looked trustworthy, and the EU line was shorter, so we backed up and made the move as all of the Russian gangsters stared at us in our little Nissan car covered in stickers. 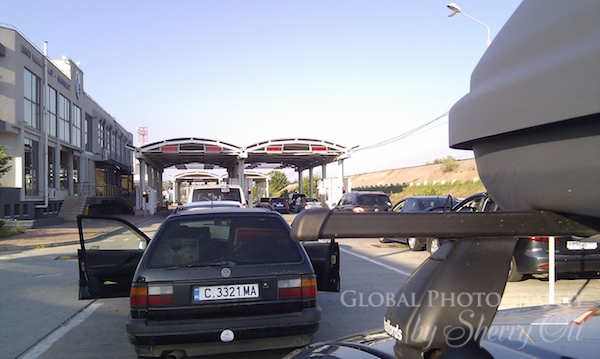 In our first line of many at the Romania border mixed in with the Mafia...'unofficially'

As we finally passed through the Romanian border control, they looked at our Temporary V5 (car title) document and said, “I don’t know if they will let you in with this, but good luck.”Â  They referred to Moldova.Â  I had forgotten about our paperwork woes until that moment in time.Â  I forgot we were traveling on temporary paperwork that would most likely cause us troubles.Â  Everyone warned us about troubles we may have getting into Ukraine, but I hadn’t considered Moldova being an issue.Â  Regardless – we had to get through both borders tonight as they were only 2 km apart anyway.Â  This may be a long night.

We moved on to the Moldova border and waited again.Â  The Romanian man came back over to us to chat and we thanked him for his advice regarding the line.Â  He asked us where we were going and we explained.Â  He looked surprised in an aloof way that all Eastern Europeans tend to have.Â Â  In regards to Ukraine he said to us in a thick accent,

“My advice, don’t stop.Â  Just stop shortly at big gas stations to get food and drink and keep going.”

Hmmm…not quite the advice I was hoping for.

We pulled up to Moldova and handed over our ‘temporary’ paperwork as I silently prayed that they didn’t understand the word “temporary”.Â  A woman asked us if we had ‘green card’ and Dave said no, and she walked away.Â  None of us knew what a green card was!Â  With my overactive imagination I wondered if she was asking for greenbacks.Â  This lack of green card brought a whole slew of people out to our car.Â  However the green card wasn’t the issue, it was the ‘temporary’ on our V5 that they focused on.Â  A middle aged man asked if we knew French.Â  We were in luck…we had Canadians on our team.Â  Dave and Deb looked a bit panicked though and Dave said to him that he knew a little.

All conversations after that took place in French and were done with Dave while we would get little updates occasionally.Â  They first said that Ukraine would not let us in without paying a fine of 8000 Euro…yes, you read that right.Â  However Vasil, the French speaking boarder guard would try to help us out as he was immigrating to Canada soon and had an interest in helping wayward Canadians apparently.Â  Rick and I, the lowly Americans just sat back and watched it all unfold!Â  The good news is that we had Vasil on our side.

Vasil went to bat for us and escorted Dave to the Ukrainian border to talk to his ‘friend in the other country’ to see if he could see if we could get in with the temporary V5.Â  They were gone for about 20 minutes and came back with good news.Â  The Ukrainian side said that they’d let us in without paying a fee…yippee!Â  Problem solved! 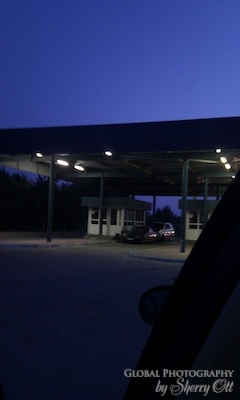 Finally finishing up at the last of 3 border crossings...5 hours later...

Natasha wasn’t so keen on letting us through Moldova (the whole 2 km of it) without the proper car insurance.Â  She insisted that we must buy insurance first before we be let through Moldova.Â  However, if we paid her directly, we could take care of it all ‘quickly’ and she would escort us to the border without insurance.Â  Her fee for the personal escort – 50 Euro – the same price as the insurance.

We had already been dealing with this border ordeal for 3 hours at this point – we banded together 50 Euro and paid clicky heeled Natasha and were escorted through Moldova.Â  Deb even got a ‘special’ ride in her car; what a bargain.

She got us to the Ukrainian border and the whole ordeal started again.Â  By this time the Russian mafia were long gone in their SUV’s and we were still ironically going through processing.Â  Dave explained (in English this time) why we had a temporary V5 and what we were doing.Â  Yet we were very careful to say that we weren’t leaving the car in Mongolia as that was a no-no with the temporary paperwork we had.Â  After another hour a man with a rather large belly came walking by our car with a little briefcase.Â  We learned this was the insurance man there to sell us the proper insurance for Ukraine and Russia.Â  Once again we cobbled together our US and Euros to pay the fees and finally after paperwork had exchanged hands about 9 times, and 4 1/2 hours laterÂ  we heard it…

The sound of our passports being stamped.Â  We were in!