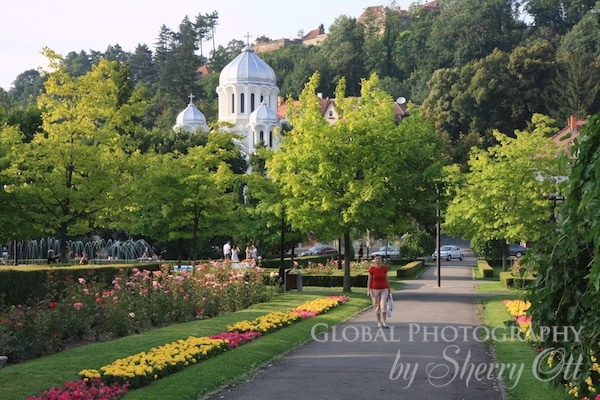 The lovely parks of Brasov Romania...Probably the Best city in the World!

I must admit, the only thing I really knew about Romania when we blew threw the old abandoned border structure on the highway was that it was the homeland of Nadia Comaneci the gymnast.Â  However I quickly learned that I was entering the world of Count Dracula thanks to numerous signs, and hotel names.Â  I’m embarassed to admit that this was the first time that I realized that Transylvania was one – a real place, and two – that it was in Romania.Â  So much for researching a place before arriving; there’s no time to do that on the Mongol Rally when you are racing through countries.Â  Romania marked our 9th country in less than a week.

We drove into Brasov a town in the heart of Transylvania and found our apartmentÂ  sponsored by RoomORama who specializes in short term accommodations. One night was the definition of short term – and they provided us a lovely apartment with wifi near the town center.Â  We walked into the town center and were all surprised with what we saw. Â  I was expecting to see a whole bunch of cheesy Vampire tourist joints and shops, and maybe even some Twilight references, but what we found instead was a pristine town decorated with flowers and intricate old colorful buildings.Â  Parks were filled with couples enjoying dusk, people playing chess, and kids riding bikes.Â  Green mountains surrounded the town and even though it had a Hollywood style sign on the hillside, there was no mention of the movie Twilight anywhere!Â  Brasov was a breath of fresh air after the heavily touristed Prague.

Brasov was quiet, simple, and understated.Â  Which was exemplified by the slogan that was on many of the umbrellas at the outdoor restaurants, “Probably the best city in the World.”Â  Way to go out on a limb Brasov!!

We walked to the main square and there we met yet another blogging friend, Matt from Nomadic Matt Travel blog.Â  When you are nomadic like myself, it’s amazing how many people you actually run into on this globe.Â  We all enjoyed a few beers, and I feasted on sausages which seem to be the staple food of this part of the world.Â  We enjoyed our last night in Romania as the next day we were heading for the border….leaving Dracula behind! 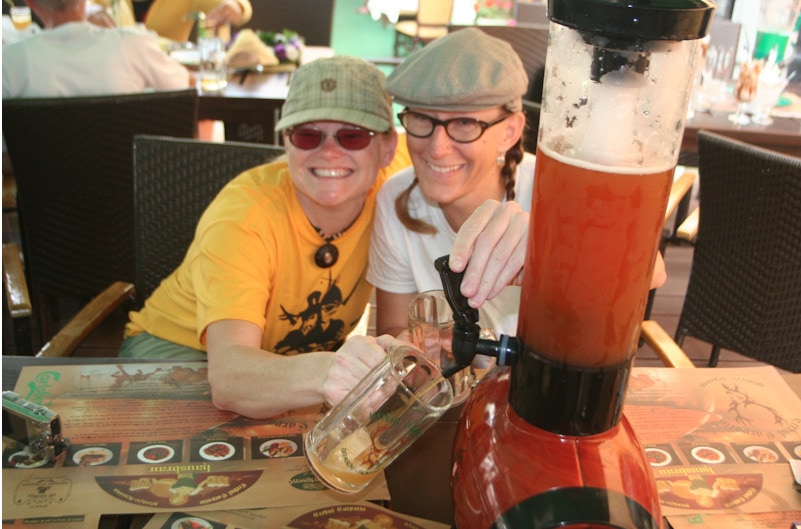 Deb and I enjoy a little beer in Brasov!