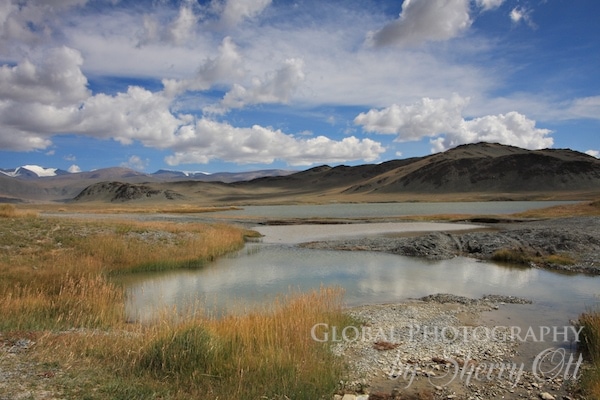 Soakng up the Mongolia Landscapes

Since we had made it into Mongolia â it was time to slow down and enjoy our surroundings. One problem, Rick had a flight to catch. He hitchhiked a ride with another team to Khovd to try to sort out his flight issues while Dave, Deb, and I took a slow day of filming and photography. The Mongolian landscape is like no other to me; and it screams out âLook at me, I am perfect. Take my photo!!â

Itâs so hard to balance the desire to complete the rally challenge and the desire to actually slow down and enjoy our surroundings and experiences. A part of me felt like the longer we had the car out on these roads the greater likelihood of us not making it, yet here we were in the most stunning landscapes in the world. Then there was also the desire to keep up with the other teams we met. It was a difficult balance though because we wanted to also savor the experience. Dave, Deb, and I had an unlimited amount of time to get through Mongolia, so we decided to actually soak it in. 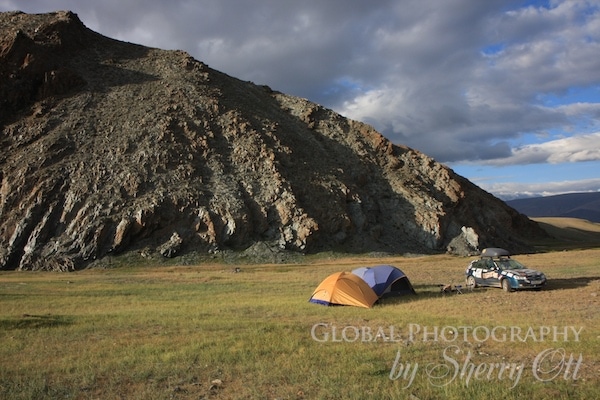 Our stunning camp site heading into the mountains 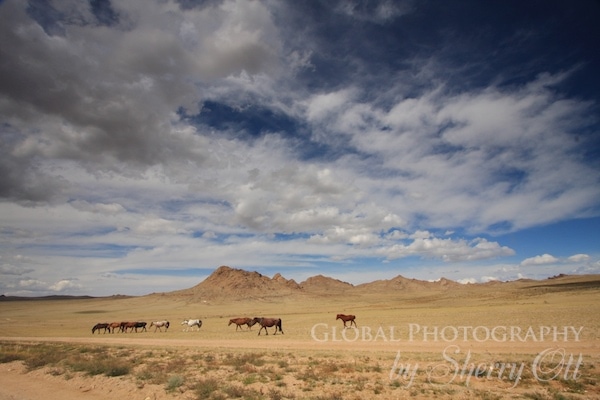 Todayâs drive took us around snow-capped mountains, and it also took us through some of our greatest challenges to date â rivers. This was the first test of our little low clearance car. However I must admit â it helped to be 200lbs lighter without Rick in the car today. Still â we knew that we had the wrong car for crossing rivers in Mongolia, but thatâs the whole point of the rally. 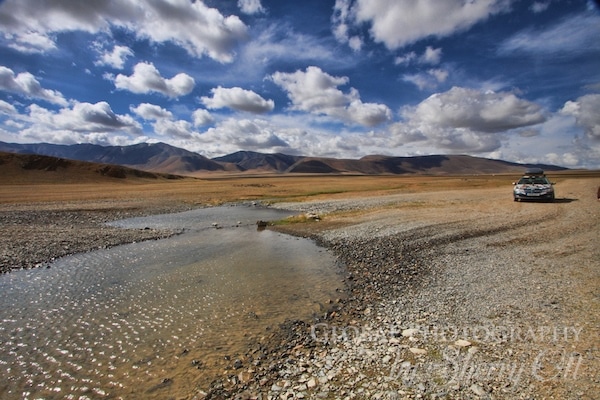 The Hot Box pauses to take in the scenery

Since we were going âSunday drive speedâ, some of the other teams caught up with us. It was great to reunite with the Sign Up Team and Cider Me Up team â not only because they were a fun group of guys, but also because they had big vehicles which could potentially tow us through water if we needed it!

We all pulled up to the first crossing and sent out our guinea pigs to test the depth. It was only about a foot deep â so we decided to go for it. Deb put it in gear and dove in with a splash! She kept her foot on the gas and powered through as we all cheered her on! I can only imagine that the Hot Box enjoyed the cool bath! 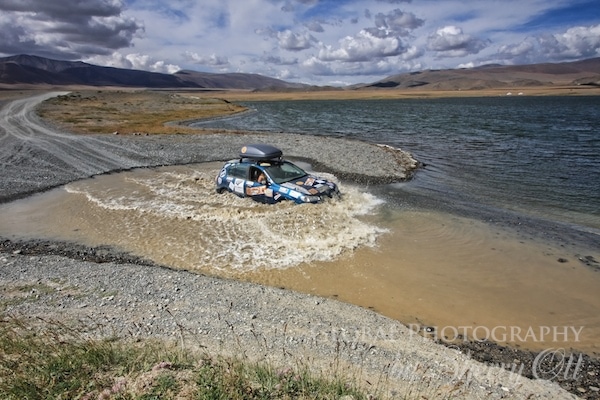 Will the Hot Box Float?

Just when we thought we had mastered river crossings â we came across this bridge. I donât even know if I would call it a bridge â it was more of a relic or felt like a prop from a Hollywood movie. When we first saw it from a distance, Deb said, âOh, it doesnât look badâ, and then we pulled up closer. Dave got out to survey the viability of crossing it and determined that we could make it. Deb and I stayed in the car as Dave directed us around some of the worse-off areas of the dilapidated bridge. At one point there were only a few exposed railroad ties that we could cross on. We stopped at the precipice to consider it for a moment and then gingerly dropped down onto the railroad ties. The ties creaked, I let out a scream, and Deb hit the gas to safely deliver us to the other side and solid ground! 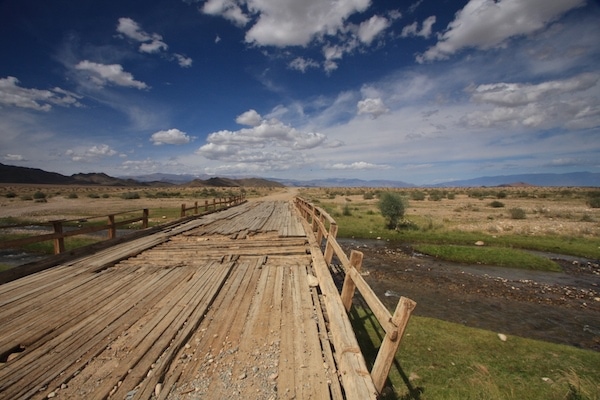 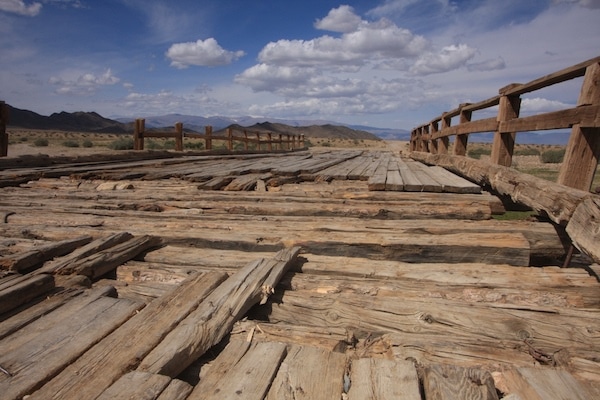 Will the bridge hold????

Video from Dave and Deb’s YouTube channel – check out all of their great videos!

We stopped for a quick tomato and cheese sandwich on the hood of our car and took off towards the Mongol Rally Ger Camp in Khovd. We were all eager to reach the camp as it promised internet and showersâ¦Iâm not exactly sure what I was more excited about!

We pulled into Khovd at 3:30PM and quickly joined the other teams there drinking beer. The camp was run by Mongolians who had experience with the Mongol Rally. After the last few years of hosting ralliers coming through Khovd, the ger camp owner decided to do the rally himself this year as the Mongolians2Mongolia Team (the first ever Mongolians in the Mongol Rallyâs 8 year history). His wife and extended family were left to run the camp this year and they eagerly awaited his teamâs arrival! 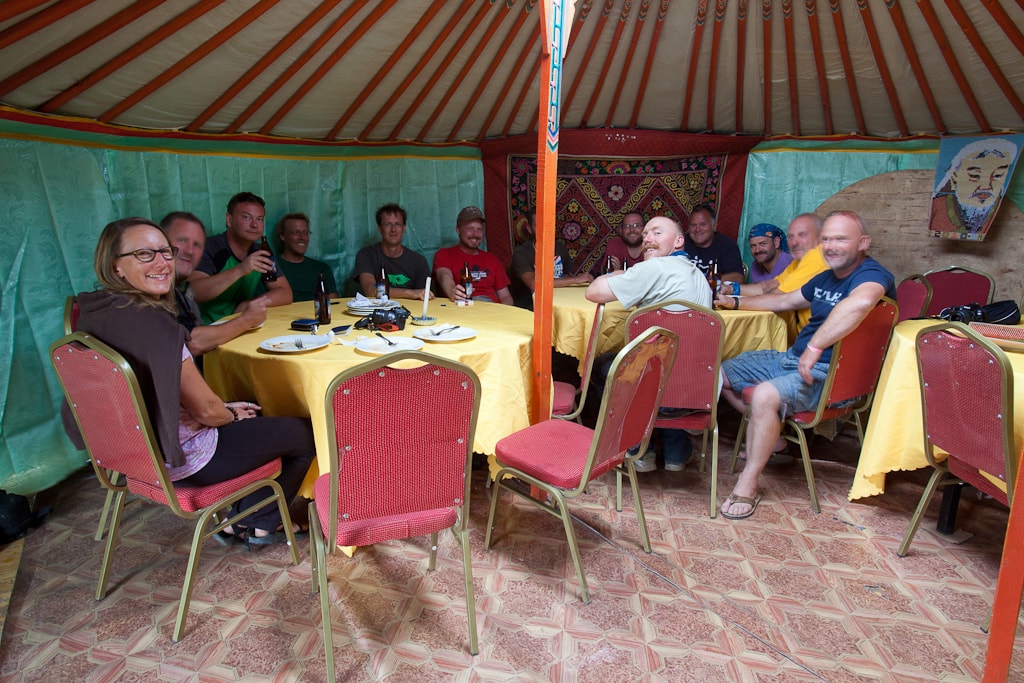 We were excited to have a night in a ger with a proper bed. But first there was more team bonding to do over beer. Throughout the night more teams arrived and everyone recanted stories about the first few days in Mongolia. Some were unbelievable, and many centered around car issues and repairs. But we were happy to see the teams that we camped with at the border all making it through Mongolia. We were especially happy to run back into the Mongolian Madness team whoâs antics entertained us to no end. One of the mates had a black eye as we learned that the Irish boys had some team disagreements. Thatâs certainly one way to handle team dissension! However all was fun and laughs now with a few beers and a few more miles under everyoneâs bald tires.

A late night of rally partying â but back on the road tomorrow!

6 Responses to "Slowing Down – Mongol Rally"