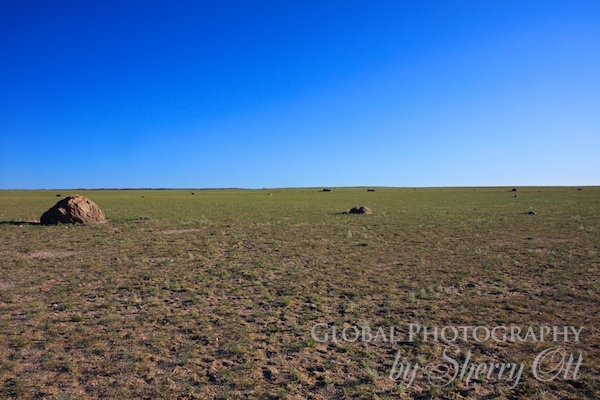 You can see for miles in the Gobi Desert

We slowly moved deeper into Mongolia where the foreign landscapes, people, and towns started to become normal to me. We were moving from western Mongolia into Central Mongolia and the Gobi Desert; from Altai to Bayankhongor.

The landscapes changed dramatically as we left the Altai mountains and hills behind and had nothing but perfectly flat landscape in front of us now. The gers became less and the amount of people and trucks that we encountered were dwindling. This posed a bit of a problem since we relied on those people and truckers to ask directions normally!

We did run into a few teams when in Altai but as soon as we left the city we were pretty much on our own. We would take every opportunity to stop in the little villages and ger truck stops to ask for directions and to normally fix flat tires. The little towns were bustling in Mongolian standards; motorcycles parked on the main streets, mini markets, super markets, and markets all stood side by side. It was also a great opportunity to fill up on water and beer; after all, we were heading into the desert! 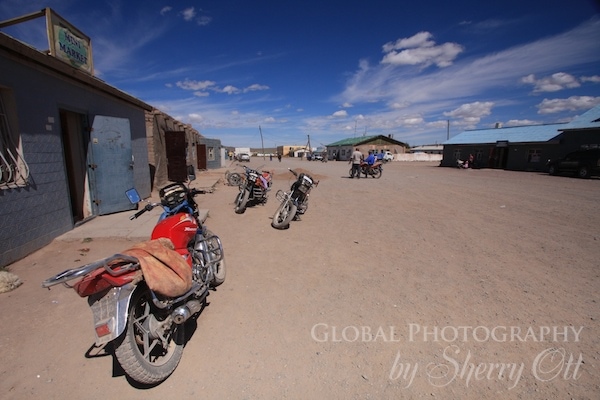 The Gobi plays tricks on you. The perfectly flat landscape provided illusions of water, cars, and camels that were never really there. It felt like you could see forever â yet you had no real way to judge distance. As we tried to find our way onto the âmain roadâ that we had seemingly wandered off of we would see little puffs of dust on the horizon and try to gauge where they were and what direction they were going â but it was a puzzle.

Weâd see what we thought was a car or motorcycle in the distance, but as we drove closer, it would turn out to be a tire. You actually felt as if you were losing your mind unable to trust your eyes any longer. But we just kept heading East with our compass and hoped that we would end up in some form of civilization. 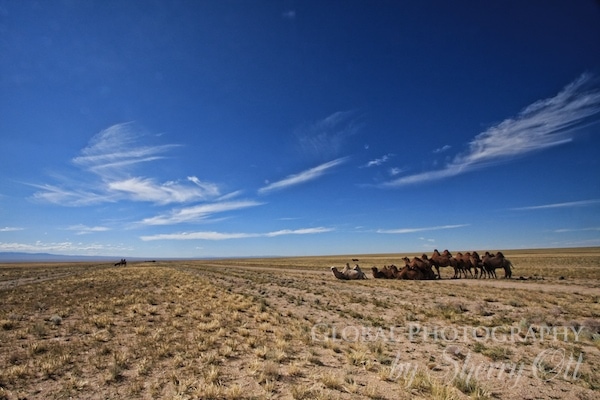 Camels are our only entertainment in the Gobi

After driving all afternoon and seeing nothing but camels and tires, we finally came across a little ger camp. The camp appeared to be a little rest stop for truckers, buses, and miners. We were excited to see civilization again and get some assurance that we were going the right direction! However our excitement quickly faded when we pulled up to a big winding river.

We asked a couple of kids on a motorcycle if we were headed in the right direction and they motioned to follow them. We initially thought that they were headed to the Bayankhongor too, so we followed them. Instead they pulled up to the river and started to motion to follow them. We clearly werenât getting to Bayankhongor without crossing this river. And this was an actual river, it was the deepest yet.

Before we could even really think about it we decided to follow them. We tried to ask them if weâd make it in our car, but as we looked at them on their motorcycle, we determined if they could make it then we âshouldâ be able to make it too. Before we knew it we were following them into the water which was splashing up on our hood.

However this wasnât an obvious river crossing of point A to point B. This was a complex geometry problem. These boys clearly knew that going directly across wasnât viable, that we had to snake through the river in the shallowest parts in order to make it to the other side. As a passenger it was nerve-wracking and exciting at the same time. Dave kept it in 1st gear and his foot on the gas constantly and we all cheered for our bald tires to somehow grip the slippery rocks and keep moving forward.

The motorcycle would pull up onto a little island and then take off again in a illogical direction downriver. The motorcycle actually lost its traction once and nearly went down, but somehow the nimble boys kept it upright. We continued to snake through tributaries of the river wondering if it would ever stop. In one particularly deep section water came in the floorboards of the front passenger seat where I was sitting.

Video from Dave and Deb’s YouTube channel – check out all of their great videos!

But the little Hot Box made it. We paid the boys $5 for their help and were all on an adrenaline high that we made it through with little damage except for a wet floorboard. We later learned that many of the teams were towed through that river crossing. However I think the fact that we didnât have much time to think about it or debate was actually in our favor. We simply put our trust in the locals and followed the un-obvious path diligently.

Now we were certain we were going in the right direction to Byankhongor but the sun was quickly going down so we picked a nice flat spot in the Gobi to camp for the night. We had picked up some Chengis Khan vodka in one of the little villages that morning, so we all celebrated our dayâs Gobi adventures. 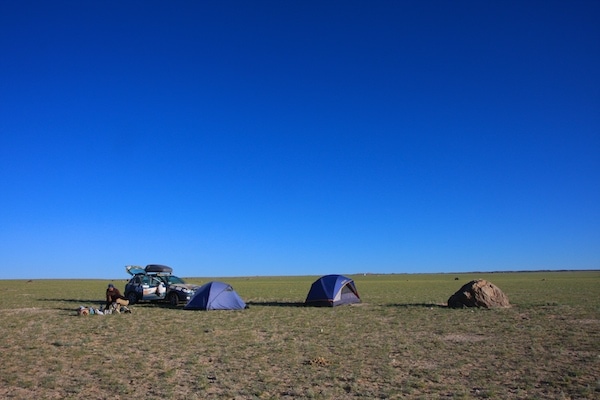 As the sun went down and the stars started to appear, we were treated to one of the greatest sites yet in Mongolia â the Milky Way. We stayed up late, sitting on our camp stools mesmerized by the billions of stars and the crystal clear line of the Milky Way. Shooting stars graced us and we all thanked our lucky stars that we (and our car) had made it this far.