A Day of Traditional Naples Foods You Have to Try

A Day of Traditional Naples Foods You Have to Try

I know many people skip over Naples in order to get to the Amalfi Coast, however itâs a big mistake! Naples has one of the most vibrant street and food cultures in all of Italy. It wasnât that long ago that I used to be scared of going to Naples since you tend to hear a lot of stories about how rough it is there. But after I went there with some friends I realized that Naples wasnât a lion, it was a kitten. And most importantly, Naples Italy food is something not to miss! It has an incredible food scene…it is the birthplace of pizza after all.

Tina from Our Edible Italy, not only teaches you how to cook Italian food, but she will also get you familiar with the Italian food culture. Her husband, Claudio, is from Naples and who is better to go to Naples with than a local?

Tina, Claudio, and their son Leo took me to Naples to learn more about the food scene in this bustling and often overlooked city! I was specifically interested in the pizza culture in Naples, but I learned that there is much more food there that shouldnât be overlooked! We walked and ate our way all over Naples!

A Day of the Best Naples Food

Hereâs how we approached our day of walking and eating. This isnât a food tour, instead this is simply something you can do on your own. Or you can hire Our Edible Italy to put together a custom tour/walk for you.

Start with an espresso and traditional pastry at a Naples bar

Since itâs a long day, why not start out by stopping at a Naples bar. Before you get alarmed, in Italy, a bar is a bar with alcohol, but it is also a place where you stop for pastries and coffee. However, this is no Starbucks where you get big drinks, sit down, and stay forever working on your laptop.

In most Naples bars there isnât even a place to sit. Instead, there is a cashier where you tell them what you want, pay, and get a ticket. Then you take that ticket over to the little bar area and give it to a barista. The barista makes you an espresso and you stand at the bar and quickly drink it and go on your way!

I suggest you kick off your Naples food walk by getting a quick espresso and a little pastry to give you a little energy.

Check out the seafood at Porta Nolana Market

Since you just had your bar pastry, itâs time to go look at some traditional Naples food. The Porta Nolana Market is a local pedestrian market located north of the port in the area around Piazza Nolana. Youâll know you are there when you see the two old towers that used to guard the port entrance and are now enveloped with modern buildings.

Youâll also know you are there when you smell the fish and hear the fish mongers!

Take your time here and check out all of the seafood on offer. Itâs impressive, as I think I was familiar with only about half of the offering â the rest were all new to me! Napoletana love their seafood, so this is a great place to come get educated about it.

Of course there is also a healthy selection of fresh vegetables and fruits there too.

Naples Pizza is the pinnacle of Naples food 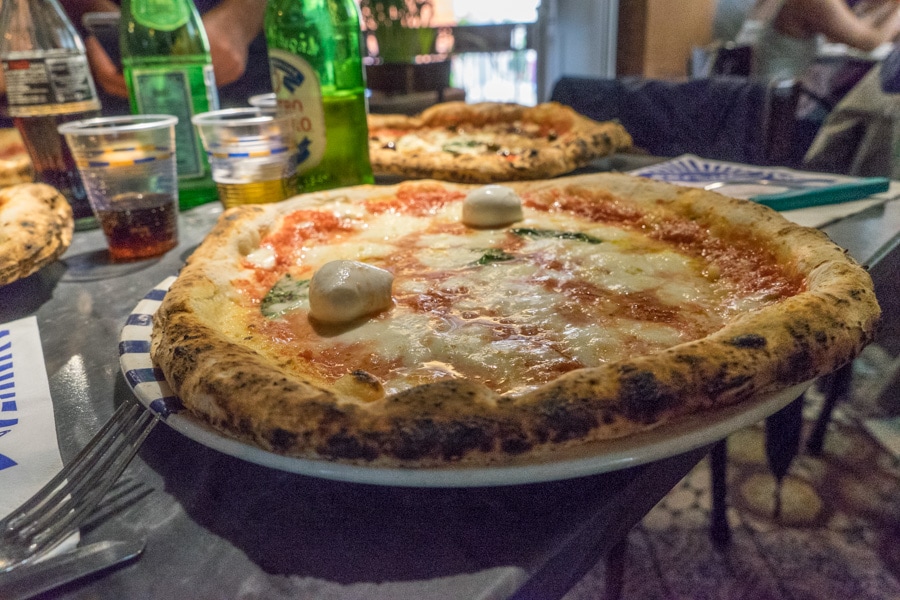 Itâs time to move on to the main showâ¦Naples pizza. “Pizza culture is a sport,”
Tina said to me as I marveled at how important pizza was to Naples. She even told me that on Italian TV there is a pizza war reality show where contestants compete!

Even though I wrote a post about Naples pizza 6 years ago – I find that you can never do enough research when it comes to pizza in Naples!

What makes Naples pizza so good?

Yes yes, I know pizza was âinventedâ in Naples and was originally a food for the poor. However, I wanted to understand why pizza in Naples is so outstanding.

We went to Claudioâs favorite pizza place in Naples â and arguably the best pizza in Naples â Gino e Toto Sorbillo. Yes â there are big lines and wait times here, however if you come on a weekday right when they open at 12, you have a shot to get in quickly like we did!

According to Tina and Claudio, itâs the crust that makes Naples pizza so good and world famous. The crust on the outside has to be full of air, super light, crispy, and a little bit of char and then on the inside it needs to be paper-thin. I had never really seen a crust that was so soft and gooey in the middle, but that is the signature process â light, crispy outside, gooey inside. Think of that middle like the inside of a cinnamon roll which is also undoubtedly the best part of the roll.

Other Styles of Naples Pizza

Claudio asked me if I had ever tried the fried pizza from Naples (also known as pizza fritta). I stared at him blankly as I had never heard of fried pizza before this. Tina went on to explain that the fried pizza was just what it sounded like, a piece of pizza with a crust top on it and then put completely in a fryer.

Just when you think Naples pizza canât get in better, they deep-fry it! I also recommend you try this at Gino e Toto Sorbillos. The crust was lightly fried and the cheese gooey inside. It sort of tasted like a calzoneâ¦but much better!

Of course in addition to the fried pizza, you can also have the regular pie.

Depending on who you talk to you might take a hard line on Naples pizza and only eat the traditional pizza margarita, or if you are like Claudio, you get a pizza al’tonno – tuna pizza! The Margarita pizza with mozzarella bufala DOP (protected designation of origin) is by far my favorite. It comes with a golf ball size of mozzarella bufala that is heavenly; you can decide if you want to eat it first or save it until last!

And of course when they bring you the pie, itâs just a big round pizza without any triangles cut. If you donât know where to start, then your best bet is to ask a local how to eat pizza . I watched Claudio cut his pizza in a typical triangle piece, but then he did something different. Because the middle crust is so soft and gooey, he rolled up the tip on his fork, pinched the end together and then ate it with his hands! The gooey middle oozed out and mingled with the crispier part of the crust and it was delicious. And that is how you take the perfect bite!

Going to Naples to Eat Pizza? Hereâs More Things You Need to Know!

Cap it off with the ultimate Neopolitan Dessert Food: Sfogliatella

I know itâs hard to believe that you could have room for more food after all of that pizza, but make sure you save a little room for Napleâs famous sfogliatella! However â I suggest you take this time to walk around a bit first. Explore the Naples points of interestÂ  for a while so that you can walk off a bit of that pizza!

Nearly all the bakeries around town will have sfogliatella. Sfogliatella means “small, thin leaf/layer,â and once you know that, youâll be able to pick it out immediately from the bakery case! Itâs sort of like a croissant with ridges â many ridges. Itâs delicate outside of crispy layers yield to a soft inside filled with custard or almond paste. 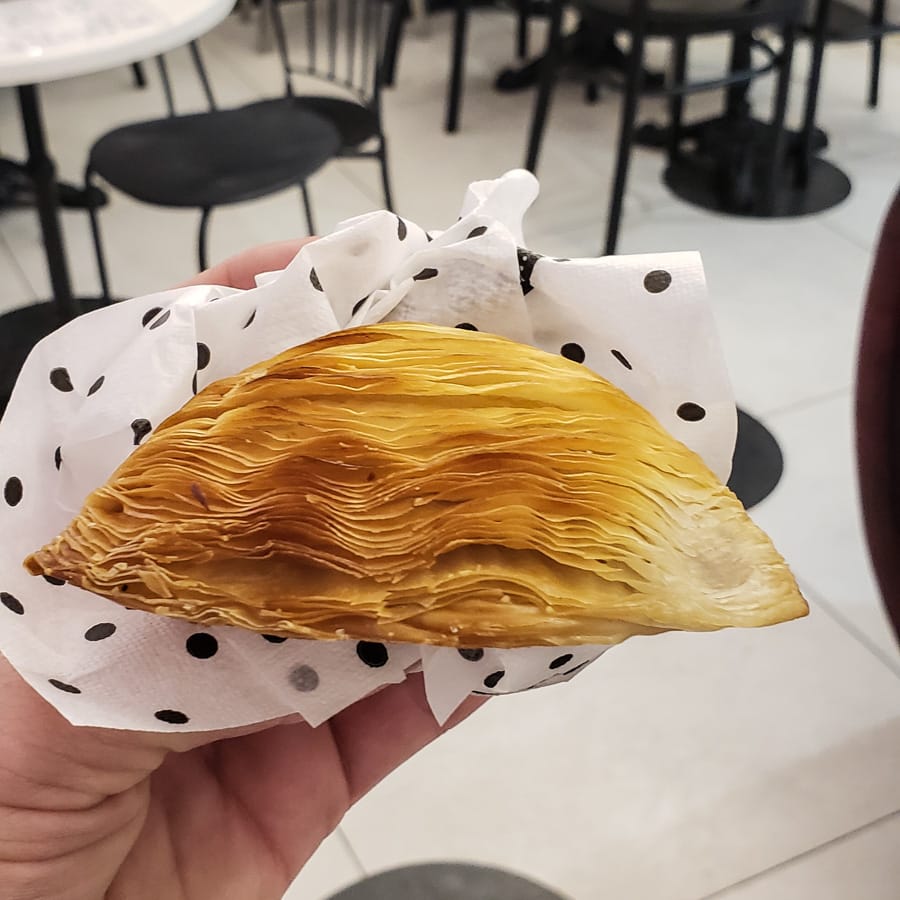 Talk to any local and they will say itâs best when eaten hot, so do your best to find a warm one!

Your day of Naples food is now complete! With this itinerary, I promise that you wonât be able to eat another bite.

The best way to see and experience Naples is to go with a local â they love to show off their city and food culture. Go slow, enjoy the gritty vibe of the city and see it for the hidden gem it is. And if you are lucky, you might even get to take home some of that delicious Sorbilloâs pizza for a midnight snack!

Go Local in Naples and Try the Best Food!

Contact Tina at Our Edible Italy to learn more about Naples food and culture. She arranges custom food culture tours in Campania!

Get immersed in local Italian living and food culture on Tina’s 9 day Taste of Campania Food and Culture Tour
Experience a beautiful farmhouse setting in the Sorrento countryside and farm (field) to table cooking, visits to local farms, food producers, and artisans…. a true celebration food, farms, and artisans all the while exploring Naples and the must see attractions.