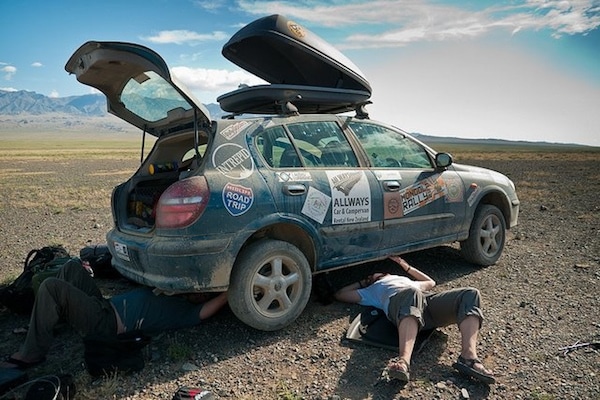 I took off driving today out of Khovd missing one important thingâ¦Rick. He was unable to change his flights and we had to continue on without him while he flew to Ulaanbaatar. But the show must go on so Dave, Deb, and I plotted our course towards Altai.

The driving started out ok for about 5 minutes and then I hit the corrugation. The car bounced around out of control as if you were on ice sliding all over. The sound of the dashboard and entire car rattling was painful, and the hood of the car vibrated violently. This is no way to treat a car, but there was no avoiding it. Every road (and there were many to choose from) was the same.

This bouncy âroadâ took a prisonerâ¦our exhaust system. All of a sudden we heard the painful sounds of metal being drug on the ground. Shit â it was time to put our lack of mechanical skills to the test. I stopped and we all got out to look underneath and sure enough our exhaust system had ripped off the muffler and the clamps and was now hanging precariously.
For those of you like me that really have no idea what the exhaust system is â hereâs some Cliff notes:

The exhaust system in your car has three main functions. First it transfers poisonous exhaust gases from the engine to the rear of the car. Secondly, it quiets down the engine sound while running. Finally, it converts unspent fuel into spent fuel with the help of a catalytic converter.

Basically â itâs importantâ¦but not THAT important. Our motto with the car is that if something breaks or falls off and the car still runsâ¦then we donât need it. 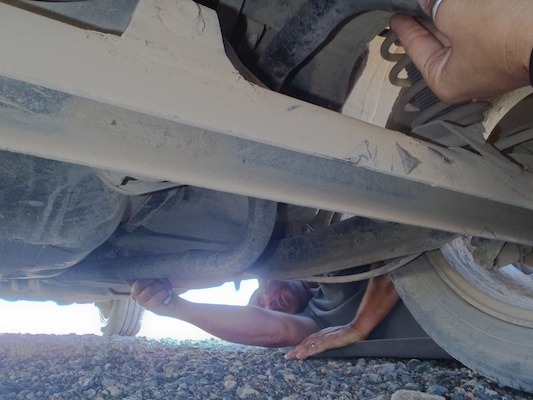 However, we didnât really want something dragging all day so we emptied our trunk searching for anything we could use to tie up the exhaust pipe but only had a bungee chord that would certainly melt from the heat after a while. After about 20 minutes, a few teams pulled up and surveyed our issue. Mongolian Madness gave us some copper wire to use and we crawled under the car and tried to tie it up the best we could simply to keep it out of the way and not rip anything else off with it.

However the roads continued to be brutal and copper wire could only last about 40 minutes before it too broke off. At least we had lots of wire, but this was going to be a slow day with lots of stops. On top of it today for some reason we were hopelessly lost in our navigation. We got lot in construction roads and had to turn back around a number of times.

The day was brutal on the car as it took us 10 hours to go 130 km. Our goal was to make it to the next little village in order to try to get some better solution than the copper wire as we were running out quickly! However finding the town proved to be a challenge amidst all of the âroadâ construction and our awful out of date map.

We finally arrived at the little village and locals pointed us to the gas station which was a small building with one pump surrounded by fencing. We showed the owner our issue and he went into a shed and promptly pulled out about 5 feet of fencing wire! He refused to take any payment for the wire and helped us also get our spare tire filled up that had somehow gone flat. We crawled back under the car and with a pair of needle nose pliers and secured the exhaust in a couple of places before the sun went down. 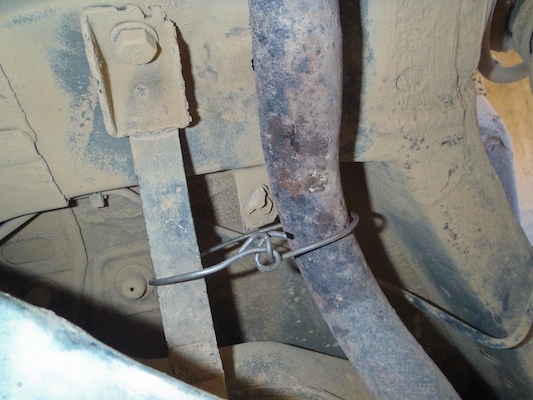 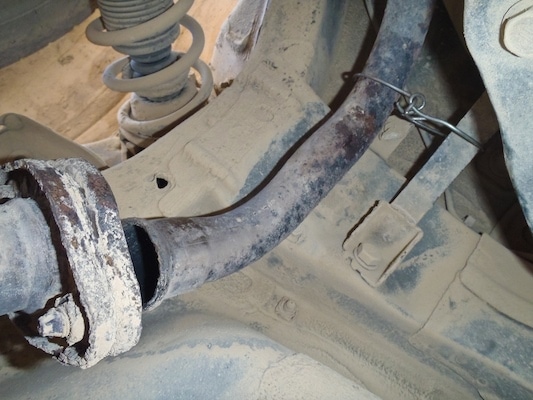 It was a hard day, but thereâs always a silver lining somewhere. Not only were we helped by the kindness of other teams and locals, but now our car had a deep, guttural sound to it. It finally sounded like a rally car!