Hotel Molokai the One and Only 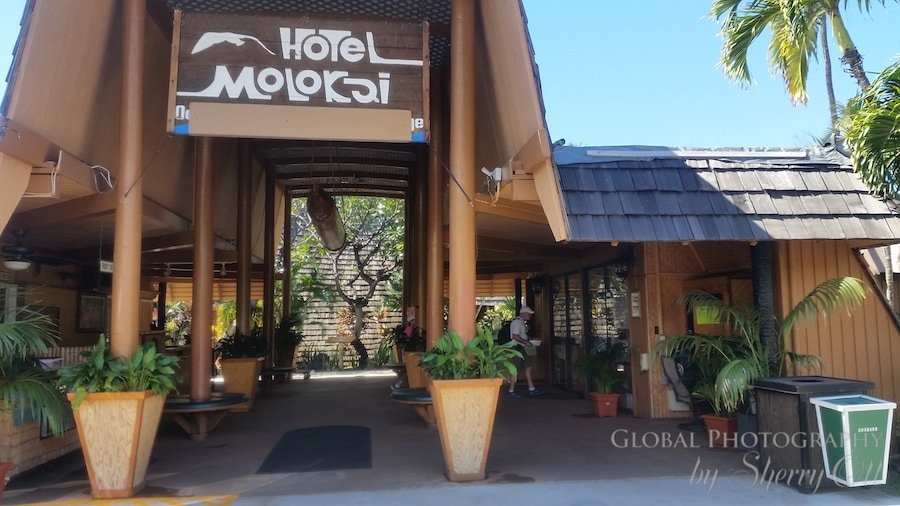 The one and only Hotel Molokai. Check out the cool font!

They say one is the loneliest number, but not when you are the only hotel on the Hawaiian Island of Molokai. In fact, if I were to put my business education to work, one is a pretty great number when you are on the supply side of supply and demand equation. Hotel Molokai is truly the only hotel on the island, however they donât abuse their âpower positionâ, they embrace it by offering a great lodging experience.

As soon as you pull up to Hotel Molokai you get a glimpse of its Polynesian quirkiness. What â youâre surprised to find out that the only hotel of Molokai is quirky? Just keep in mind that when you are the only one, you can get away with anything; sort of like an only child. And I personally think that being called quirky is one of the best compliments anyone can get. As we pulled into the parking lot the first thing that struck me was the font on the sign. Iâm normally not a âfont personâ; but I have plenty of friends who Font Nazi’s. You know – the ones that notice every nuance of fonts and would rather sleep on hot coals rather than use sans seref. The Hotel Molokai font was funky, just as the bungalows were funky inside and out.

The hotel was made up of a number of stand-alone wooden bungalows (with 4 rooms each) in a pseudo A-frame design. The inside of each room was slightly unique – no two were the same â which in my world makes for a great experience. I stayed in one of their recently remodeled rooms right on the water with an amazing sunrise and sunset view. Most rooms have little kitchenettes, where you could cook a simple meal. And all rooms have a big lanai where you can sit outside and enjoy the view. Or if napping is more your style, test out one of the many hammocks between palm trees which are dotted among the property enticing you every time you walk by. 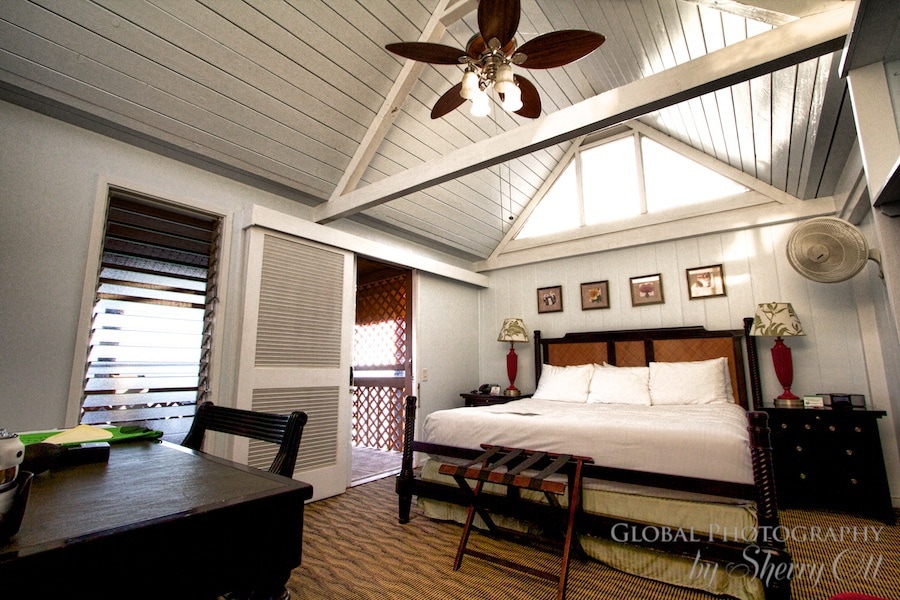 My updated room looking out on the bay. 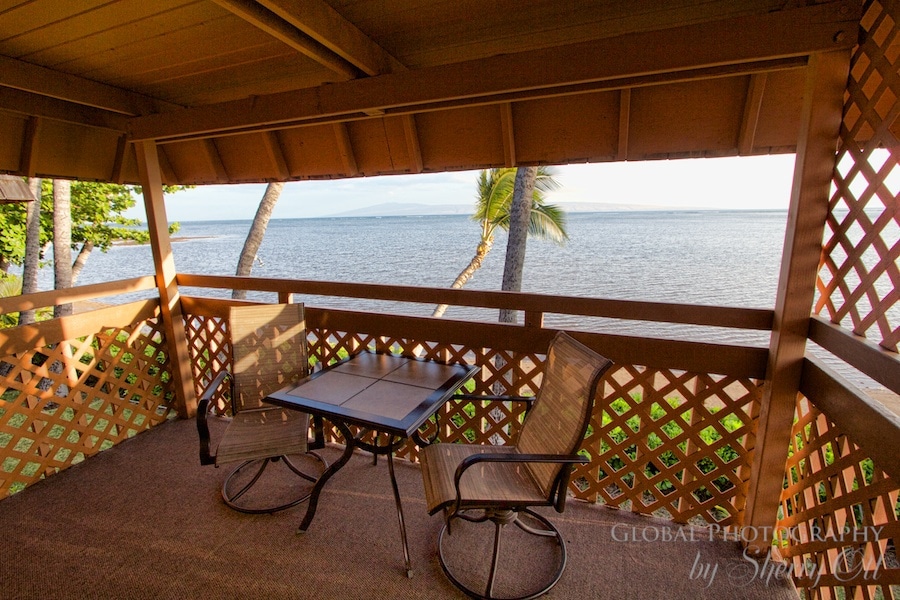 Since Molokai is home to one of the longest fringe reefs in the world, there isnât much of a beachfront at Hotel Molokai. Instead the waves crash far from shore on the reef about 50 feet away leaving a calm little bay by the hotel property (which makes for beautiful still photos). Thereâs also a great hotel pool to swim in if you donât feel like playing in the shallow waters of the Pacific near the hotel. 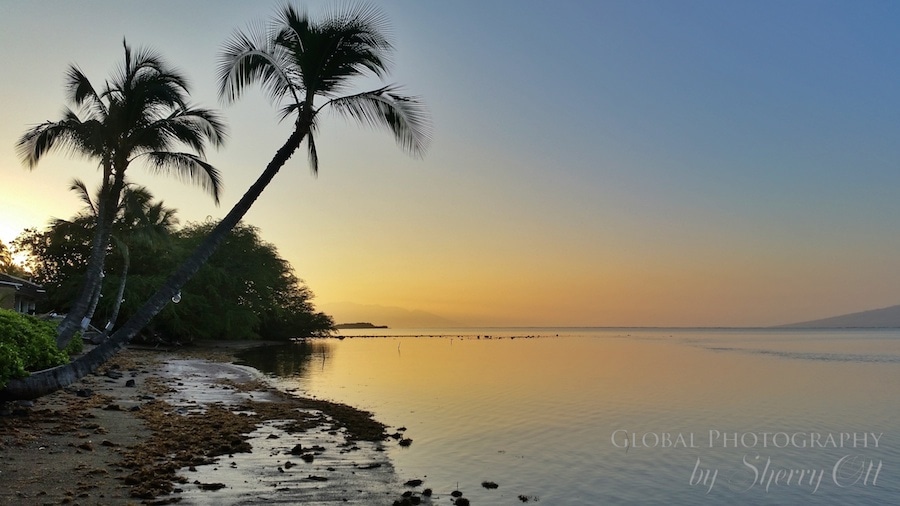 One of my favorite pics from the trip – sunrise outside my bungalow. 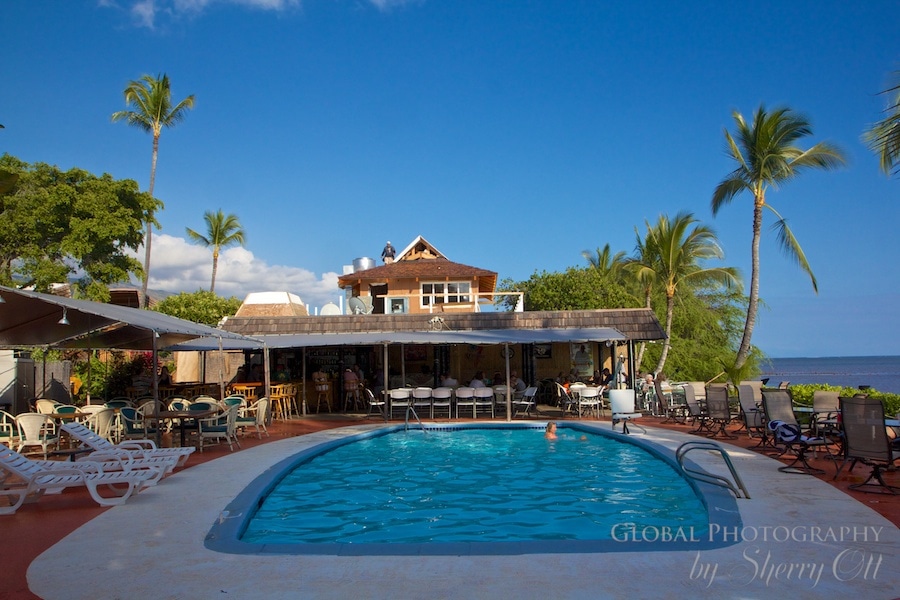 The hotel is always bubbling with activity and people, not just because itâs the only place to stay, but also because it holds one of the two liquor licenses on the island. Hotel Molokai is where locals and visitors come to mingle. And on Monday nights from 4 to 5, thereâs even more reason to come have a drink â itâs Managerâs night at Hotel Molokai. Luckily I arrived on a Monday and I sat down and ordered a colorful martini to watch the sun go down near the bay. As my drink was delivered to my table, so was Michael Drew, the long-time manager of Hotel Molokai. During the Managerâs reception on Mondays he socializes around the tables meeting every guest ensuring they have a drink in hand and a smile on their face. Michael is the type of person who oozes rainbows and unicorns; heâs positive, happy, and a joy to be around. In fact, heâs clearly put his personality into the hotel. The overall feeling of being welcomed (the aloha spirit), is infused in everything that Hotel Molokai does. 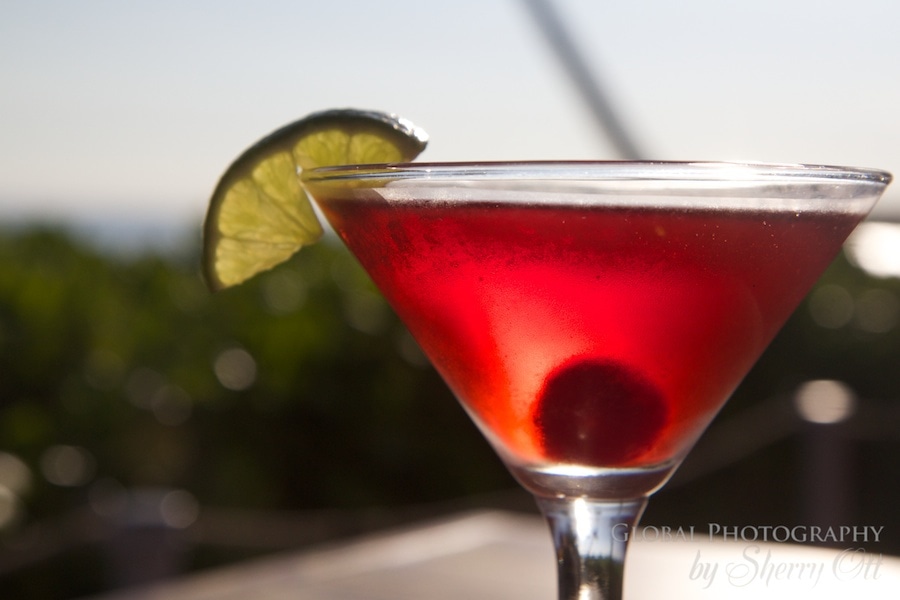 Sunset martinis are a must!

After a fire burned down the hotel restaurants a few years ago, they have been working on rebuilding it. Itâs scheduled to be opened again in the fall, and it looks as if it will be the one and only fine dining option on Molokai when itâs completed. Once again, even though the competition is low, Michael and team donât use that as a crutch. He provided me with a preview of the type of food they will be serving and it was delicious â easily the best meal I had on all of Molokai during my stay. 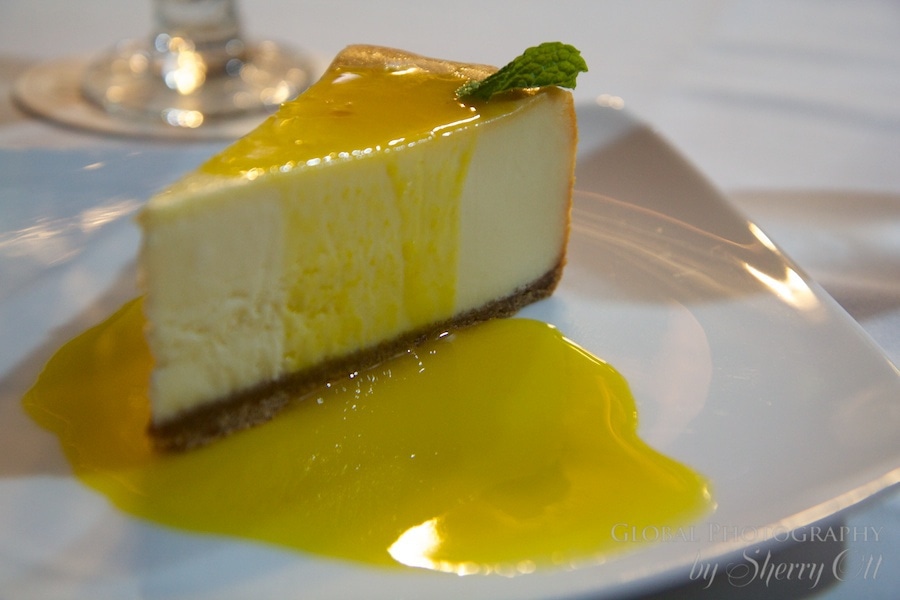 Passion fruit cheesecake. An ending to a delicious meal at Hotel Molokai

And if you are hungry now, just stop by the hotel Mon-Wed-Fri to enjoy some grilled options at the bar. Actually, Friday night is quite special for the hotel, they hold Na Kupuna live performances on Fridays from 4 – 6p.m.

If you want to dig in deeper into Hawaiian culture, travel to MolokaiÂ  is the best place to do it. Michael and his concierge team will help you set up hula lessons, lei making, coconut weaving, or ukulele lessons for very reasonable costs ($15 to $20). While I was there I participated in a jewelry making demonstration, which was a fascinating look into the beach combing culture too.

The concierge even helped me with business stuff. I had to file my taxes while I was there (the joyous life of a nomad), and they helped me make printouts and copies all free of charge.

There may be only one hotel on Molokai, but it certainly doesnât just sit back and enjoy the supply/demand equation.Â  In fact, theyÂ  work very hard at being the best hotel on Molokai! Thanks to Michael and the staff at Hotel Molokai, âoneâ never looked so good. 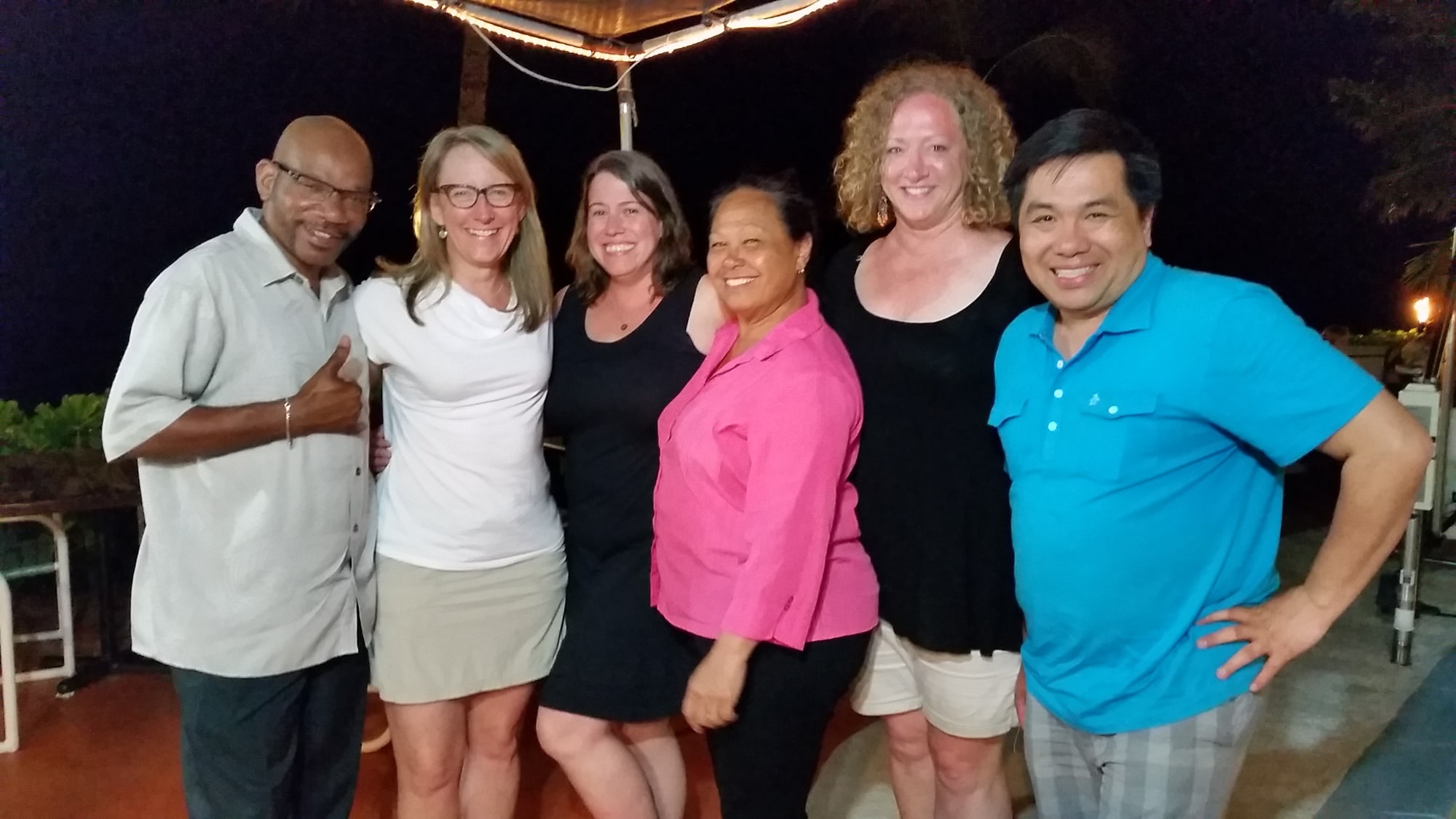 Michael (on the left) entertains us the hotel bar!

Disclosure: I was a guest of Visit Molokai during my time on the island, however all opinions here are my own.

6 Responses to "Hotel Molokai the One and Only"