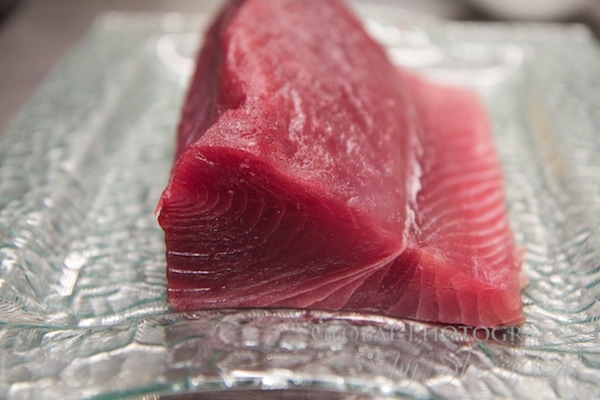 In the channels that separate Maui from Lanaâi is where you can find them – aku â otherwise known as bonito, a variety of Hawaiian tuna. Is it a coincidence that aku is also close in sound to the word ahi? We use the word ahi when we talk about tuna â but did you know that the origin of the word is actually Hawaiian?

Ahi is caught near Lanai in a fishing channel where the waters swirl and the fish congregate. Fisherman go out daily to snag the best quality tuna which then gets promptly shipped off to Japan for auctioning at Tsukiji Market. Â However the ahi who donât make the long trip to Asia go to the Oâahu fish market to be sold to a middle man who will then sell to the chefs of Lanaâi and surrounding islands.

Fresh, ruby red ahi is a beautiful site costing a pretty penny all over the world. But when you can get it really fresh â from waters you can see from the beach you are sunbathing on â then itâs even better. While visiting Lanaâi I made sure that I got my share of this Hawaiian delicacy â if it were left to me, I think I could eat ahi for breakfast, lunch, and dinner â and I practically did. Â My favorite way to eat ahi is raw – and in Hawaii there are three main ways to eat raw ahi – Poke, Sushi, and Sashimi.

My Hawaiian ahi journey started with Poke (pronounced Po-kay), which means cut up fish. As you would guess, poke is just that â cut up ahi chunks smothered in sauces ranging from simple to complex. Years ago poke was created out of simple necessity. With no refrigeration the fresh fish on the island had to be preserved somehow so it was cut up and then preserved in sea salt. Hawaiians would add ginger, maui onions, sesame oil, green onion, seaweed, soy sauce in whatever clever combinations they wanted and then served it up as a dish. I tend to refer to Poke as deconstructed sushi. The spicy tuna poke reminds me of a spicy tuna roll, itâs just not as pretty to look at. I watched Ciso from Ohana Poke Market prepare poke and serve with his family. Their secret poke recipes were clearly in demand – as evidenced by the long line of locals winding out of his shop salivating for the dayâs specials. 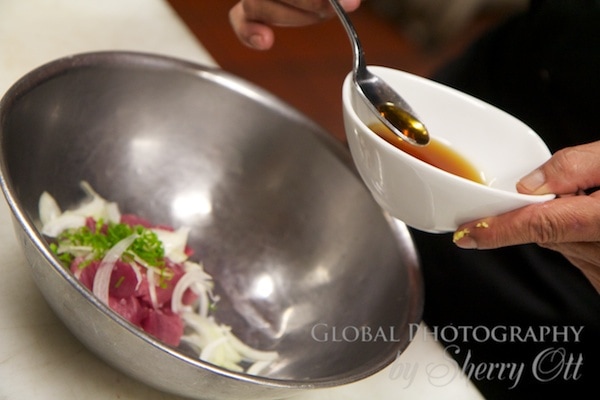 A soy sauce mixture is poured over ahi and onions

I consider sushi the more sophisticated sibling of Poke. Poke is sort of a hot mess, and Sushi is the super model. Itâs colorful rolls filled with fresh avocado and veggies all wrapped up tight in miso showcase the ahi perfectly. Chef Warren of Lanaâi City Grille kindly provided a demonstration of just how easy and quick it is to make a beautiful ahi sushi roll.

I think I will simply stick to eating it rather than making it!

The highest grade center cut of ahi is made into sashimi. Chef Kevin from the Four Seasonâs resorts on Lanaâi Â said that he occasionally gets a call from Herbert or Daniel, local fishermen from Lanaâi who fish the channel as they are coming in for the day to let him know what they caught. Chef Kevin can purchase directly from Herbert or Daniel and the handful of other licensed fisherman on Lanaâi â providing guests a real âocean to tableâ experience. The day I visited Chef Kevin he was getting ready for the opening of the Kailani Lounge â a sunset lounge with a seafood focus. I watched as he prepared a Tuna Sashimi Flatbread made from whole wheat tortilla and thinly sliced high-grade ahi dressed with tomatoes and jalapenos. A refreshing raw ahi snack served up with a mojito on the veranda of the Four Seasons – now that is perfection. 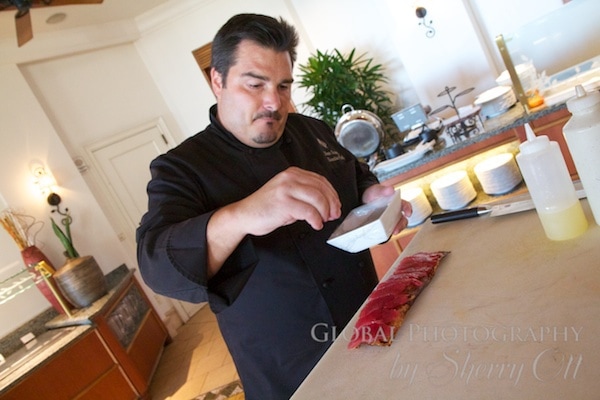 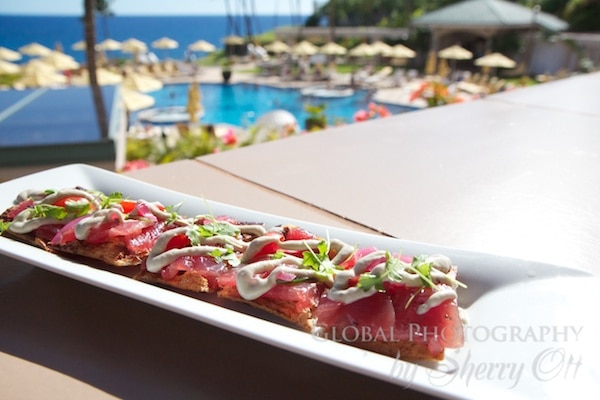 Disclosure: I was a guest of Visit Lanaâi as a part of their New Media Artist in Residence Program. Â  All views expressed here are my own honest opinions and do not reflect the views of Visit Lanaâi.

3 Responses to "Ahi A Hawaiian Legacy"