Poi Day in Kauai is Much More than Just Making Poi 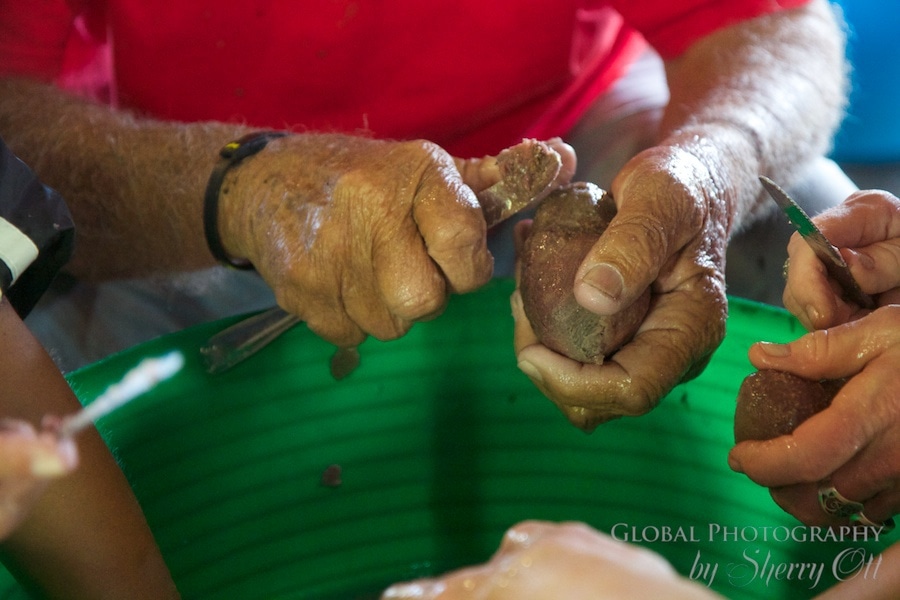 Peeling taro with volunteers at Waipa

âIâve been coming to poi day since 2001, â his eyes crinkled in a smile as he fiddled with his fishing net, âI like to come meet people and talk story.â Charlie said.

âUncleâ Charlie was one of many old timers I met who showed up every Thursday to make poi as part of a tight knit ohana (family in Hawaiian) at Waipa ahupuaâa.  However the 84 year old seemed much more interested in showing off his fishing net skills rather than making poi, but his son was working hard at ensuring the poi was processed and more than doing the work of two people.

Charlieâs son wasnât alone, I looked around and saw a mix of Hawaiian old timers, young men, middle age women, and a smattering of twenty-something students. The crowd of poi makers were made up of local people from Kauai and a few mainland part time residents.

And then there was me, a visiting tourist looking for unique experiences in Hawaii; I definitely found it. 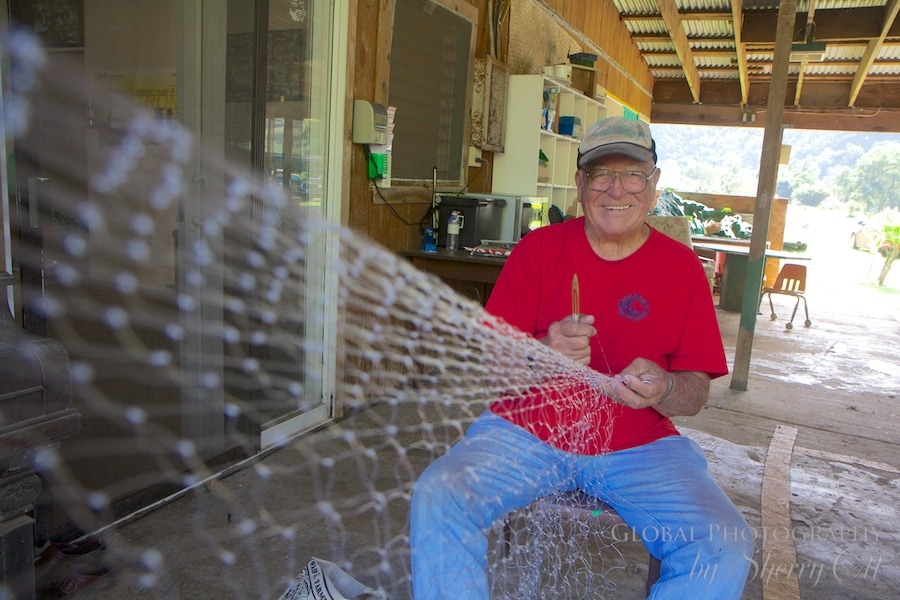 ‘Uncle’ Charlie demonstrating how he makes fishing net after the poi work is done.

Poi is a Hawaiian dish made from the fermented root of the taro plant, which has been baked and pounded to a paste. It sort of looks like a purple, sticky taffy â but it tastes more like a bland paste. Fresh poi is slightly sweet and edible all by itself. Each day thereafter the poi loses sweetness and turns slightly sour, due to a natural fermentation. According to the old timers I spoke to, the more it sits and sours, the better it is. Hawaiians often eat it with meats and fish.

This is a unique food to Hawaii only â you wonât find it anywhere else. However, the average age of taro farmer is 60, the farming of taro is literally dying off and itâs not showing signs of expanding. 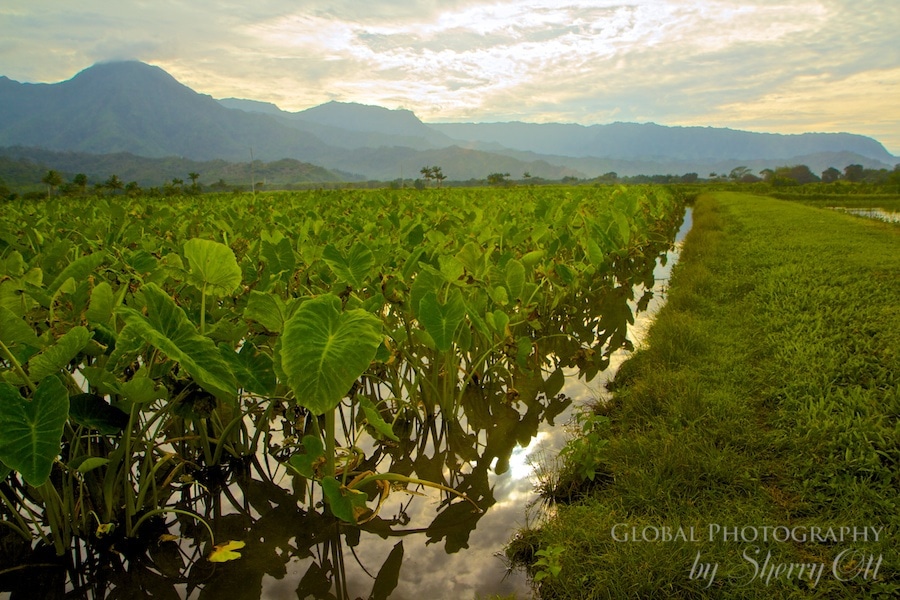 A taro field near Waipa

The goal of Waipa Foundation is cultural preservation. Itâs been around since 1982 and has a nonprofit status. It exists to sustain cultural food and farming heritage in the area. Specifically this centers around taro and the ahupua`a (native Hawaiian land divisions) as an example of healthy interdependent relationships between people and earthâs natural resources.

Poi making is just one of their programs. The Foundation works with local taro farmers who produce the purple root plant, and purchase it from them at competitive rates. They then turn around and make poi thanks to the help of volunteers every Thursday and then distribute it out across the island to locals at cost; keeping the poi heritage alive. The foundation also participates actively in the local farmerâs markets and they hold school programs and various lectures for the community. 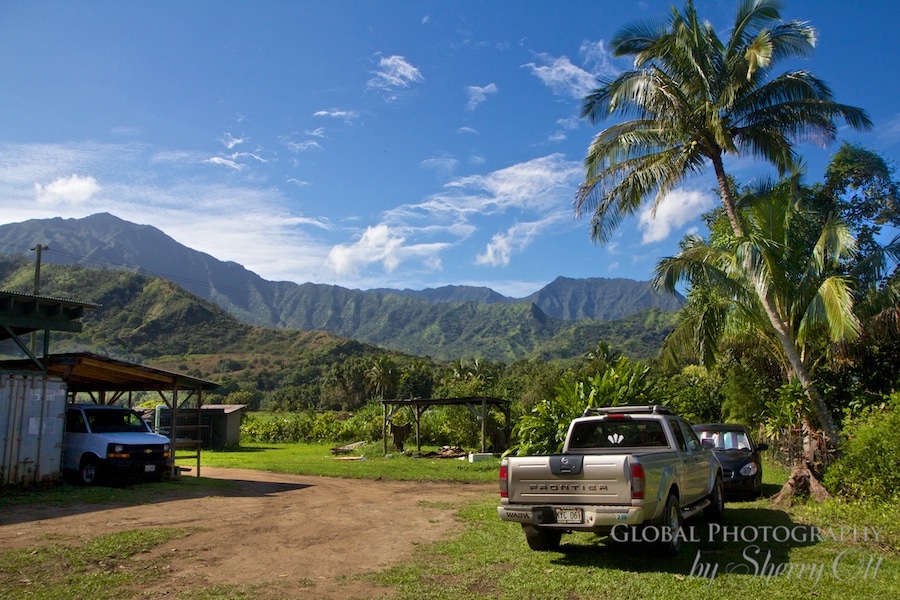 Waipa farm where we made the poi

Every Wednesday the big taro roots are cooked in huge metal barrels by a wood fire to soften them with steam. Then on poi day (Thursday), the soft taro roots are brought out in large big bins of water for peeling. When you arrive they give you a butter knife and a seat around a big barrel of water soaked taro along with other volunteers. Itâs messy and sort of gross and slimy, but rather simple work.

As we peeled the taro, other volunteers took it and started processing it into poi via a grinder. It was put through the grinder multiple times and water added for it to get to the desired sticky smooth consistency. Another group of women started bagging the gooey poi into small bags to be distributed around the island.

It was a well organized manufacturing line that produces 1000 pounds of poi every Thursday. It is then distributed by volunteers around the island and sold for $3 a pound (half the going price) and sell to seniors for $1/pound. 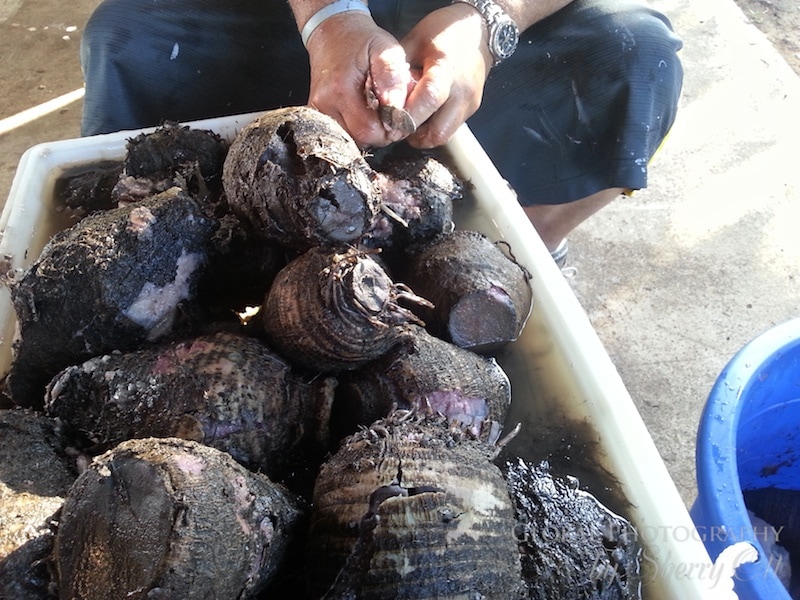 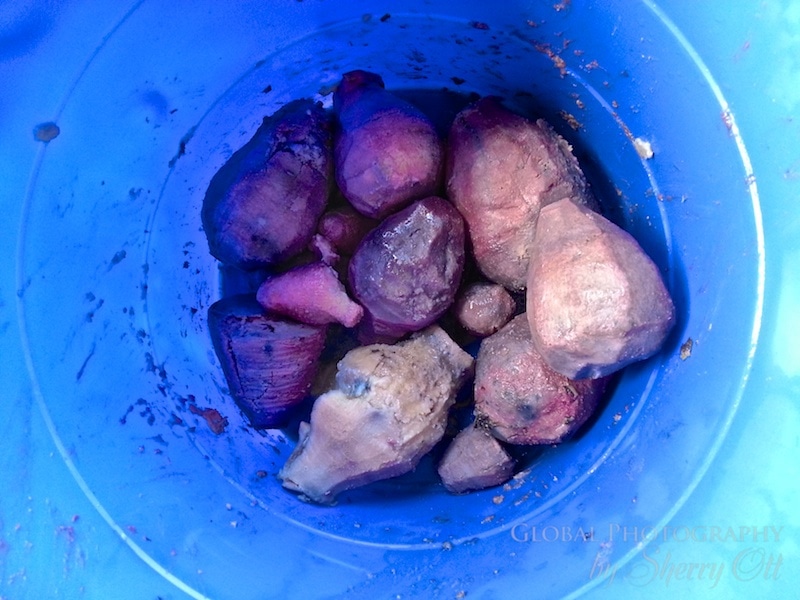 The finished product – a buck of peeled taro ready for pressing 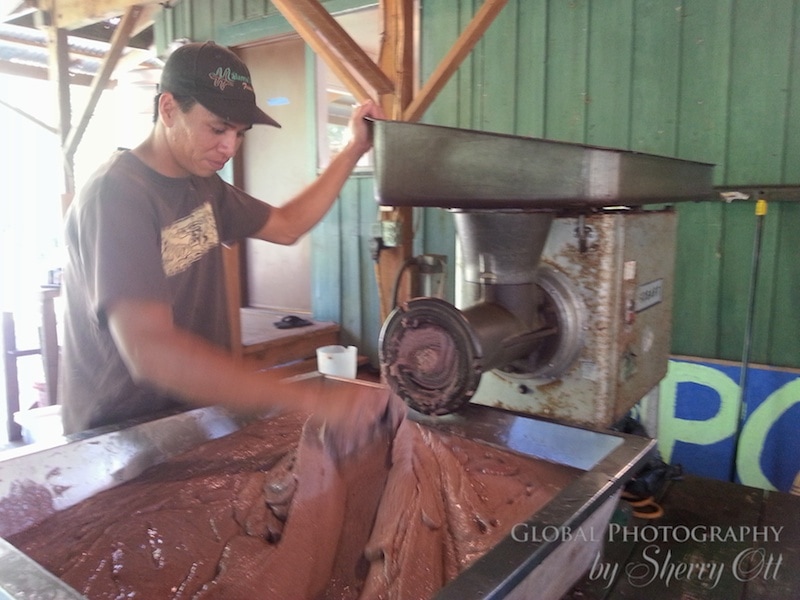 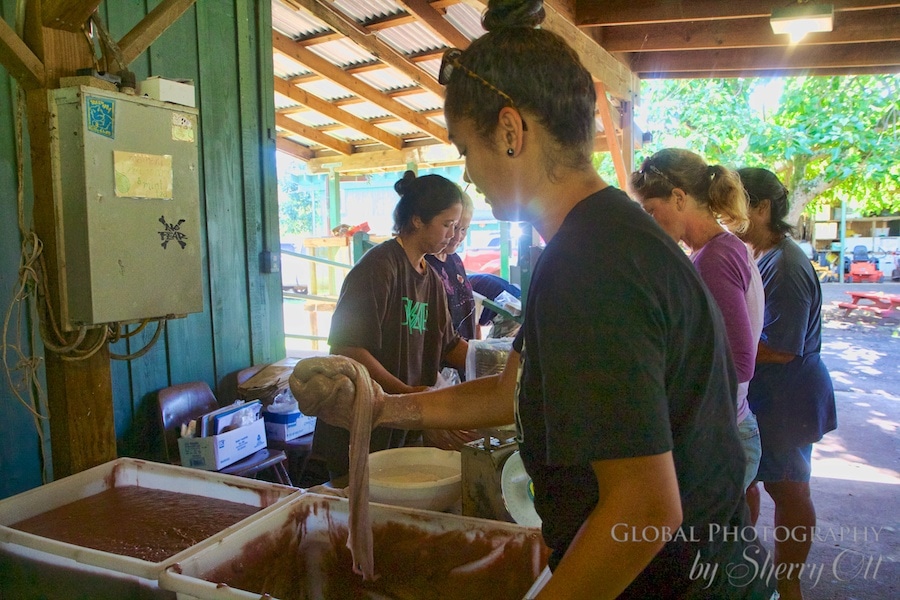 It’s not Just about Making Poi, it’s about Socializing

Itâs so simple that it allows and encourages you to get to know the people you are sitting around. Not only is Waipa preserving poi making, but they are also preserving the art of visiting.

I met Uncle Charlie who makes fishnets by hand, as well as a number of other old guys who had been coming to poi day for 2 months and some for 12 years. The volunteers were retired teachers, Vietnam vets, research students, housewives, and generally came from all walks of life. We all bonded over peeling taro and water-soaked, wrinkled fingers. There were no smartphones or distractions â just hard labor and people to âtalk storyâ with.

Taking Care of the Ohana – Stay and Eat with the Locals

After all of the manual work, itâs time to celebrate. Plan to stay for lunch as itâs was my favorite part of the whole experience! The volunteers are fed a lunch feast every Thursday for helping, and itâs not a skimpy!

We had stew, salad, rolls, rice, fruit, brownies, and of course poi for lunch. But first, all of the volunteers gathered around in a circle and introduced each other and told everyone where they were from, an elder said grace, and we all reveled in our poi production.

As I stood in the circle listening to people introduce themselves, I felt so lucky to really become a part of Kauai and not simply look from a tourist distance. Being there with people doing something worthwhile and learning about the island and a culinary specialty was better than any tour I ever could have taken.

The Future of Waipa Foundation and Tourism

Like many non-profit organizations, Waipa is being pushed to be sustainable so they are working on more for-profit activities to put in place to help them support their own needs. The obvious fit here is providing food experiences to the main industry on the island â tourism.

They are just starting to get into the ever-expanding culinary/food tourism offering Kauai cultural food tours 1 day a week.  While I was there they were also busy building a new kitchen where they planned to hold cooking classes in the near future.

Clearly the future for poi is looking bright at Waipa, and in addition to rolling up your sleeves and getting involved with poi day, there are many more tourism activities coming in the future so stay tuned.

I walked away from my experience at poi day having made some new local friends, a better understanding of the farming practices on the island, a totally unique travel experience to share, a full stomach, wrinkled water-logged fingers, and a big bag of freshly made poi. I had so much fun that I honestly was a bit leery of even sharing this Kauai find in fear of it becoming overrun. But Stacy Sproat-Beck, the executive director of the foundation, assured me they can always use the extra hands at Poi Day! 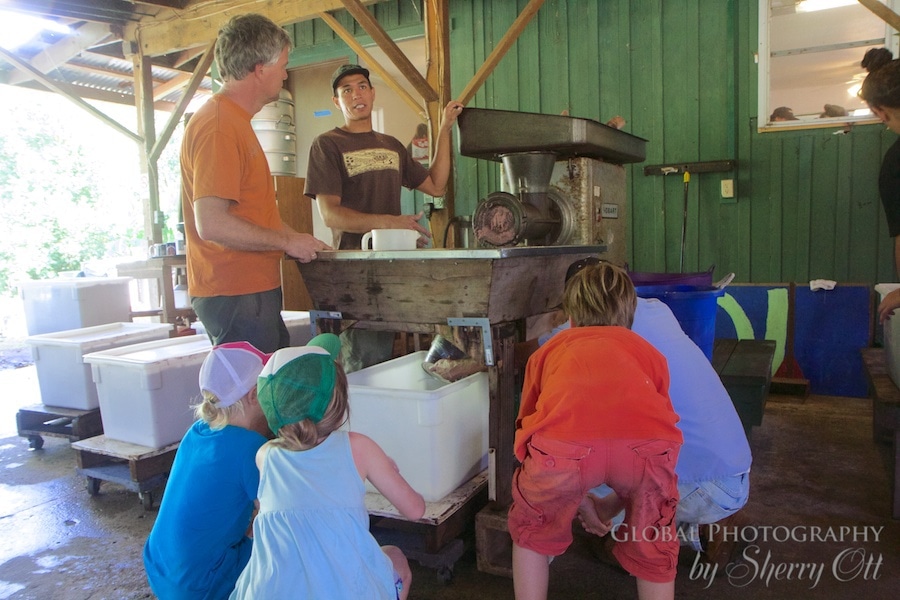 A group of tourists/kids are in awe of how poi is made. And they even loved the taste too!

How You Can Join for Poi Day in Kauai:

Want to join the weekly poi day or monthly community workday? Call Waipa Foundation at 826-9969 or email them at [email protected].  The work and lunch ends around noon. Also, this is serious work, not a tourist experience where you get to take pictures and do a half ass job at helping. You are coming to do real work and be a part of a team.

Learn more about the Taste of Kauai Food tour.  Buy poi at the local farmers market in Waipa every Tuesday.