Not For Tourists Luau 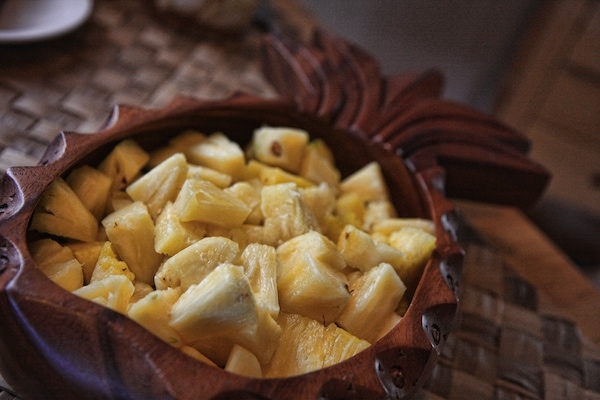 Sweet, golden Hawaiian pineapple must be part of a luau!

I heard it over and over, âYou must go to a luau; the quintessential Hawaiian experience.â However thereâs nothing about me that likes quintessential, in fact if everyone else is going to see something, then most likely I wonât just because Iâm stubborn. Iâm doubt my stubbornness is one of my best traits, but it has got me this far, and Iâm too stubborn to change myself. I yearn to make my own path in life, and that even means skipping the âmust-seeâ or âmust-doâ activities when I travel.

Luckily my Oahu hosts, Ron and Mark, know me; they know that I wouldnât want to do what typical tourists are doing. So instead of sending me off to a cheesy luau at a resort, they held their very own modern day luau at their house for me! I couldnât have orchestrated a better solution myself â authenticity â thatâs what Iâm after. Plus, Iâm not one to pass up a party held in my honor!

What is a Luau?

When I think of Luau I think of the Brandy Bunch; Don Ho, Mr. and Mrs. Brady, and a cursed tiki statue. I canât help it, Iâm a child of the 70âs.Â  A luau is simply a celebration or gathering to commemorate an event. This is typically done with oneâs ohana or âfamilyâ. Ohana in Hawaii doesnât necessarily mean blood relatives; it can be your close-knit group of friends including relatives. Ohana is a concept that is seen throughout the world in many cultures, but I love the fact that there is a specific Hawaiian term for it.

Mark and Ron wanted to commemorate my visit with their ohana by throwing a modern luau. Typically a modern day luau includes food, lei greetings, story telling, food, and of course, the hula. Oh, and I did I mention there is food at a luau? Mark and Ron had some version of all of these components at their luau thanks to a little imagination. 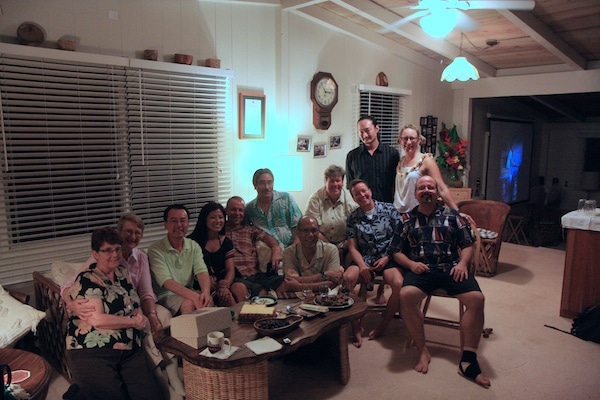 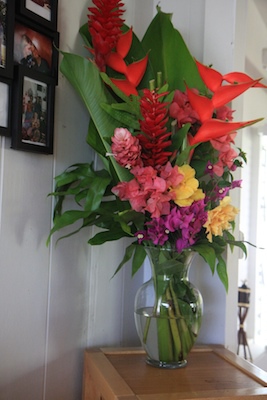 I had been accumulating a few leis during my stay in Oahu and the day of our modern luau was no different. Guests came with fragrant leis for me which served as my natural perfume for the night! Ron also gathered flowers from his yard and made a colorful tropical arrangement for the party. One think I love about tropical paradise, thereâs no need to go to a flower shop when you can gather it all from your yard! The place looked great â we were ready to party!

We didnât sit around and tell stories of hunting pigs, but we did tell a lot of travel stories. The guests were a great mix of transplants and locals. They were all avid travelers so we had a great time talking about our favorite places in the world. We even did what real travel nerds do, we passed around our passports to see the stamps.

Our modern luau didnât have hula dancing, I think we would have all needed several more beers for that to happen. However we did all dance around the bon fire in delight!

Now, on to the glorious foodâ¦

They told everyone to bring a traditional dish so that I could get a taste for the authentic Hawaiian food. Mark started cooking the night before the party. We were having a small modern luau, so we didnât need a whole kalua pig roasting in an underground oven, so we opted for the smaller, modern version of kalua pig in a crock pot slow cooking for 24 hours. 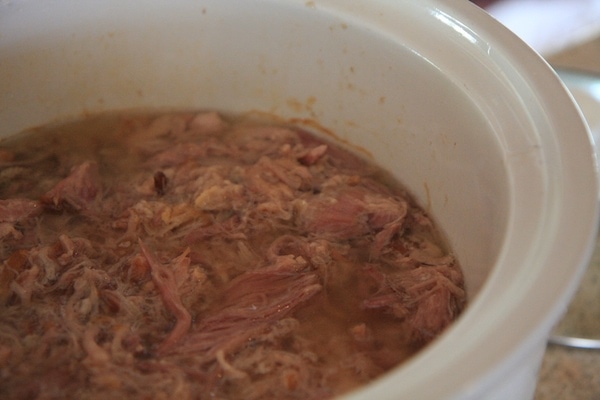 Mark was meticulous at making sure I knew all of the food and really had a chance to try the authentic dishes â so of course I had to try poi. I had been hearing about poi for a while, and it never seemed to be accompanied with a happy face. I had gotten the impression that poi was a local food that only the ancient Hawaiians liked. Poi is made from taro and therefore has a purple color to it. Taro is simply a root vegetable so the poi basically looked like purple starchy baby food to me. But of course I tried it with the kalua pig and I actually liked it. The bland starchy poi tamed the very salty kalua pig perfectly! 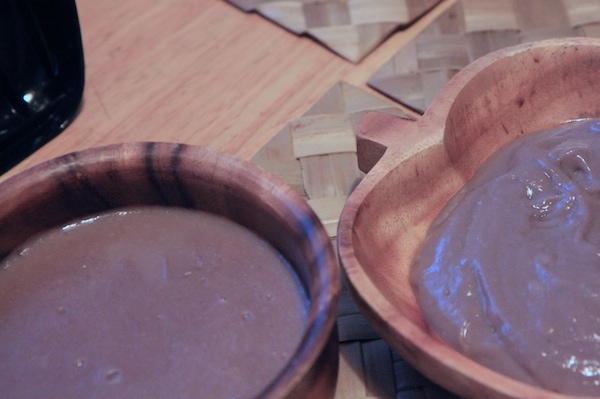 Also on the menu was the famous spam sushi, Spam Musubi. Yes â itâs not myth, Hawaiians love their Spam. So much so that they grill it, put it on top of sushi rice, and wrap it in seaweed for a âtreatâ. 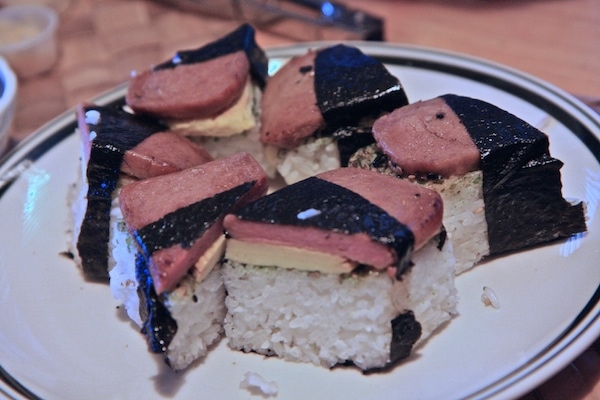 My new favorite food, poke (pronounced poke-kay), was also on the luau menu. Itâs made with skinned, deboned, and carefully filleted raw fish, and takes a variety of dressings and condiments. My favorite are the spicy ones. Poke means “slice” in Hawaiian; it looks like deconstructed sushi rolls without the rice and tastes heavenly!

On the other hand, one of the traditional foods I wasnât too excited about was Lau Lau. It comes with different meats, but it is generally butterfish or pork with fat wrapped in taro leaves and steamed. We had butterfish lau lau and it was my least favorite item mainly because the fish was so fishy tasting and the taro when steamed tastes similar to spinach. Next time I will try the pork or chicken and see if I feel differently about it.

The other items were chicken long rice made from cellophane noodles, simmered in chicken broth and served hot with pieces of chicken. Lomilomi salmon made from raw salmon mixed with diced tomatoes, onions and seasoned with seasalt. And of course we had fresh, sweet, golden Hawaiian pineapple.

Our drinks mainly consisted of the local Kona brewed beer and we even gathered a few coconuts that had fallen from trees and pried open with a hammer and nails! 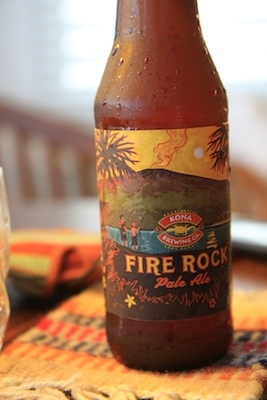 Beer brewed in Kona on the Big Island

For dessert we had a favorite Hawaii donut that has nothing to do with Hawaii – malasada. They are also referred to as Portuguese donuts and you donât want to miss out on these! 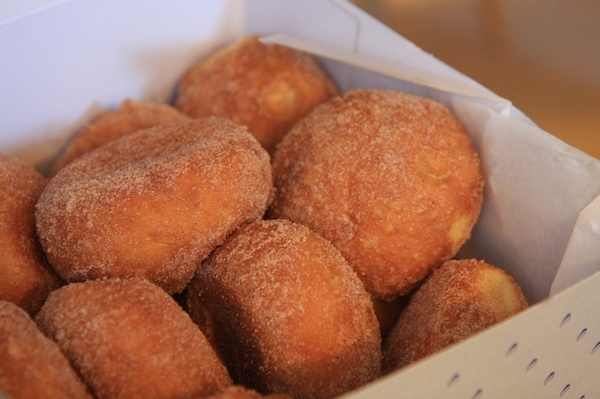 Finally, we had the traditional dessert of haupia, a coconut cornstarch pudding. However my friend Yen gave the haupia a really modern twist â she made haupia jello shots! A party isnât a party until there are jello shots! Her concoction of haupia and coconut rum was a hit for everyone. 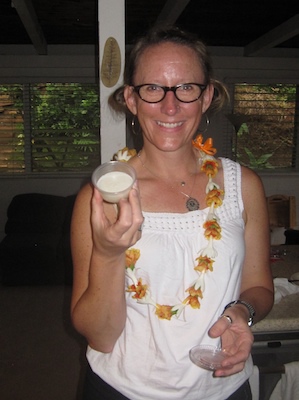 Me testing out the haupia jello shots…lots of testing was needed!

Our modern day luau might not have had all of the ancient pomp and circumstance as a âcommercialâ tourist luau, but for me this was what I was looking for. A real glimpse into the local lives and foods of Hawaii.

Have you ever attended a luau? What was your favorite food?

18 Responses to "Not For Tourists Luau"