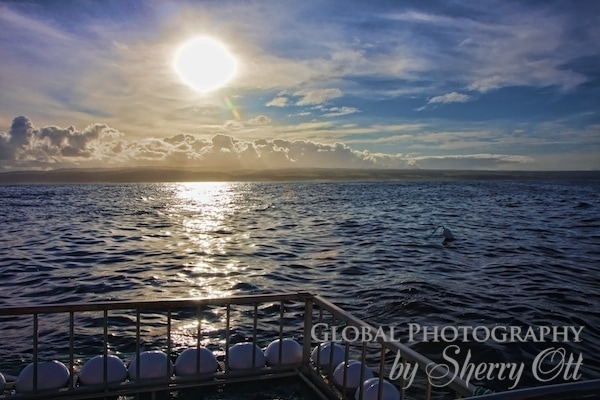 A water color sunrise over the shark cage!

I hate scary movies; Iâve been a terror wimp my whole life. I have never even watched Jaws. The movie poster alone sent me into tears running for my mother and making me think twice about jumping into the lake â let alone an ocean. It was good that I grew up in the land locked Midwest as I was pretty sure that sharks couldnât get to me there in Illinois River; however, I didnât completely rule it out.

So when I spontaneously clicked on the âcontactâ button on the Hawaii Shark Encounters Website â I have no idea what came over me. 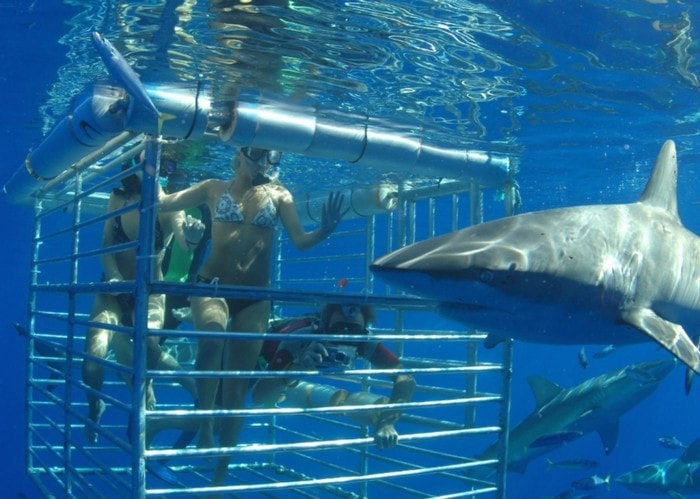 Yes…I actually wanted to do this. Photo by Hawaii Shark Encounters

Iâve changed a lot since I was a kid â I used to be terrified of adventures, now I crave them. Maybe it has to do with the fact that Iâm having a midlife crisisâ¦.I mean how else could you explain my participation in the Mongol Rally this summer? But for whatever reason, seeing sharks up close and personal in the Pacific Ocean suddenly seemed exciting to me instead of terrifying. Itâs kind of like when all of a sudden I started liking olivesâ¦Iâm not really sure why, but it just happened. Sharks, olivesâ¦not quite the same, but suddenly Iâm craving them both.

Hawaii Shark Encounters runs tours off the North Shore of Oahu; home of the big waves. The website provides a lot of information on the tour and sharks in general. Their big warning about the tour is not about the sharks, but about seasickness. Apparently itâs a small boat about 3 miles away from shore, which equals a pretty rocky experience. I decided I would pack my Dramamine just in case.

My friend Ron and I got up, made a big pot of coffee and took off for the North Shore at 5AM. Yes, that wasnât a typo. The tour started at 6:30AM, apparently the water is a bit calmer then. As I got closer to the harbor, my nerves started to kick in a bit, but strangely I felt rather calm. Since I had been involved in so many âquestionableâ activities around the world, I felt like to do this activity in America was probably the safest place I could ever do it! We are a country of âwatch outâ, âbe carefulâ, âdangerâ, âsign this waiverââ¦so I felt pretty relaxed.

We arrived on time and easily found the boat. There were 9 other people signed up to meet sharks up close and Ron decided he would simply come along for the ride and be my photographer. I was excited for the familiar company! We popped some Dramamine and the boat took off.

The Ride to the Shark Diving Cage

There were two guides on the boat who lectured us on safety instructions while we drove the 3 miles out to the floating cage. The morning was gorgeous and the sun was just starting to rise. My coffee had kicked in and I was feeling alive as the warm Hawaiian sun hit my body. Calm, cool, collected. The guide said that only 5 of us could be in the cage at the same time so we would need to go in two groups. âWho wants to go first?â he asked. 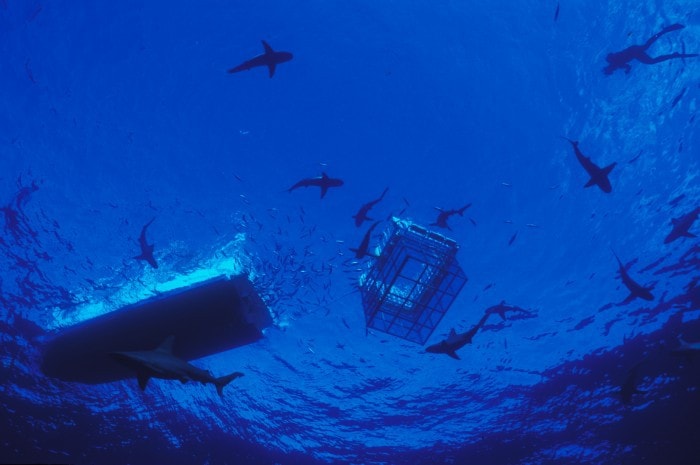 Without hesitation I raised my hand and said, âIâll go.â Ron turned around and looked at me somewhat surprised; Iâm pretty sure he was more worried for my safety than I was! My feeling is that I might as well be bold and first, else I just get nervous waiting around.

There it was â off in the distance, a red flag attached to a silver floating cage. Rocking gently on glistening blue water. It looked safe enoughâ¦

We were lectured again on safety of how to get in and out of the cage. I had the feeling that the only danger I was really in was slipping on the boat itself somehow. I slowly descended down the ladder into the surprisingly warm water, steadied myself on the rungs of the cage and put on my mask. I took one last look at Ron as he snapped pictures and I dipped my head underneath the water. 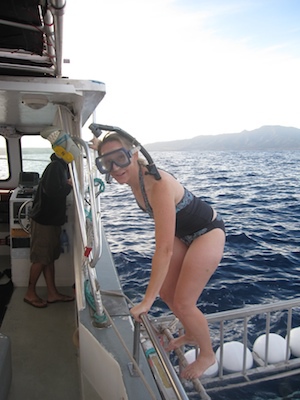 Alone with the sharks!

There they were, staring back at me. Galapagos and Sandbar sharks calmly swam around the cage circling around the boat and us; there were about 12 of them and 5 of us. The biggest ones seemed to be way over 6 feet. I was surprised at how big they were when they swam underneath the cage. They werenât frenzied or menacing, but instead they seemed to simply be going about their business. They were sleek, and moved about fluidly. It was sort of like seeing the Abominable Snowman after Hermey the elf pulls out his menacing teeth and heâs simply a white fuzzy snowman. 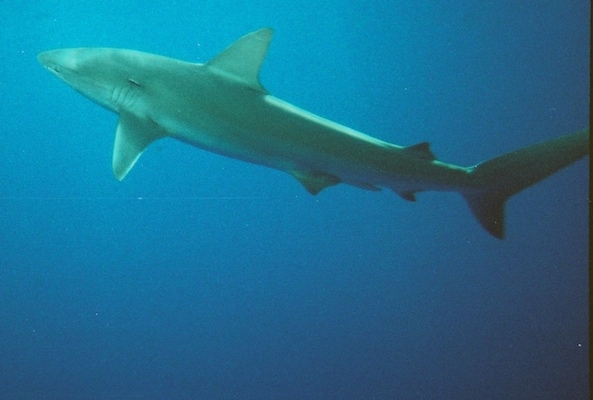 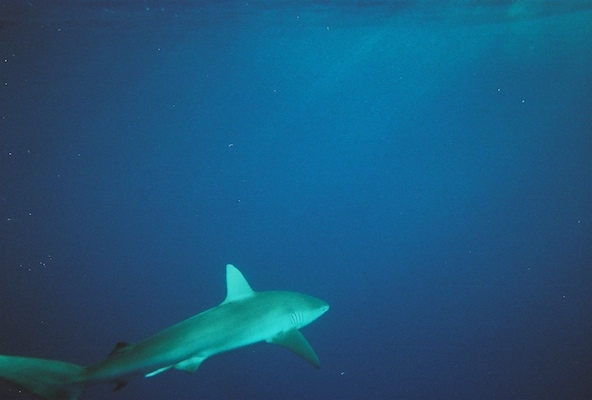 The hardest part about the cage experience was the fact that it moved around constantly in the waves, I felt like I was being jostled around like a pin ball. It was challenging to hold on, try to take photos, dodge a few jelly fish, AND make sure that my foot didnât inadvertently float outside of the bars and end up as shark breakfast. Since we were 3 miles from shore the waves and subsequent cage movement was pretty substantial. Even though the cage floated, it didnât move as fluidly as the boat does on water so after a while even in my Dramamine state I started to feel a bit queasy. I stayed in the cage for about 20 minutes and then got out to let other people in and give my stomach a break. Ron greeted and eagerly waited for my underwater report of shark sightings. I survived! But first, I had the pleasure of a warm fresh-water shower. 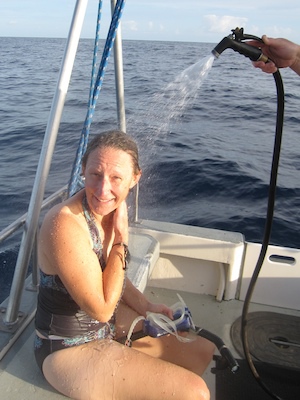 Awwww…not a bad way to start off a morning!

The good:
Overall the experience was quite fun and very safe. It was really beautiful to simply see the sharks swim so close by. It was exhilarating but not terrifyingâ¦perfect! Plus â I loved the warm âshowerâ at the end â it was a great touch! Finally, if you didnât have a camera with you, you could buy a disposable one on the boat.

The could-be-better:
The website talked extensively how the tour would include an opportunity to really learn about sharks; the website states âA very important part of our tour is shark educationâ. During the boat ride to the cage we were supposed to get a âtalkâ on shark biology, behavior, and learn about the importance of them in the Hawaiian culture. Unfortunately this didnât happen at all. The only things the guides really briefed us on were the safety instructions.

Would I recommend it?
Yes. However I would like to get the shark education promised on the website. Iâm sure that if we had asked, the guides would have provided it. But in the excitement of the moment, I honestly forgot about it.

To get more information or to book a tour check out
Hawaii Shark Encounters – www.hawaiisharkencounters.com
Learn more about the cage

Disclosure: Hawaii Shark Encounters hosted my shark cage experience . However, all of the opinions expressed here are my own â as you know how I love to speak my mind!

20 Responses to "Shark Adventure in Hawaii"