Chain of Craters Road: How to Enjoy this Barren Landscape

Chain of Craters Road: How to Enjoy this Barren Landscape

The radio plays old Van Morison tunes as I sing along in the car with my eyes peeled on the Chain of Craters Road wondering what I will encounter next. The Big Island’s main attraction is volcanoes; it is the youngest of the Hawaiian Islands. There are 6 volcanoes that have worked together over the last one million years to create the Big Island.

Even the radio station on the Big Island has the call letters â LAVA â I let out a little chuckle at the silliness of it all.

However the land in Volcanoes National Park, and specifically the Chain of Craters Road, is no laughing matter. Itâs the site of destruction; the product of the volcano goddess Pele and her wrath against Mother Nature.

Even though Iâm pretty sure they are cousins in the earthâs family tree, these women are in battle.  Each one in their corner of the ring,  and they are ready to rumble! 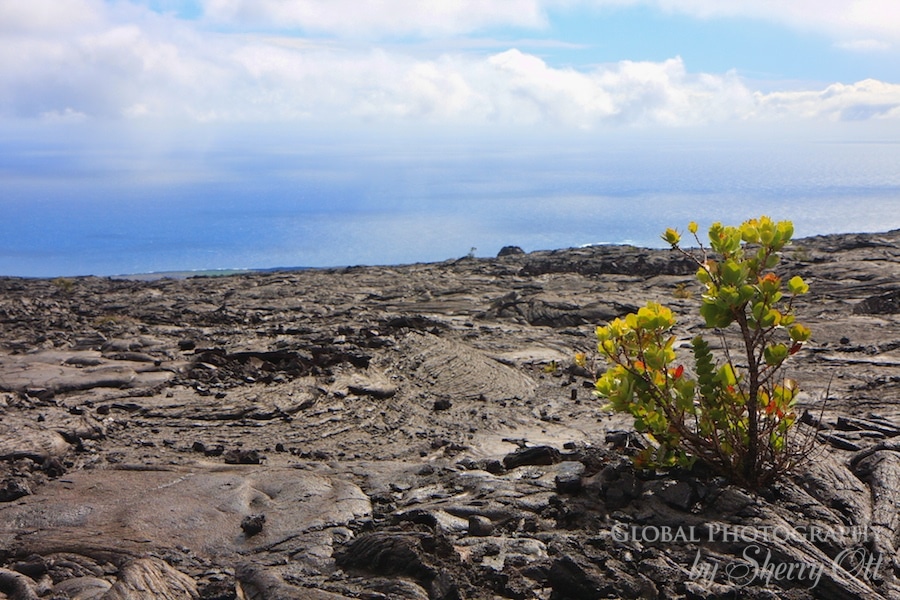 Life battles forth from the Lava

Be Prepared For All Kinds Of Weather

As I drive my rental car down the Chain of Craters Road I too am in an all out battle; not with Pele, but with Mother Nature. Wind and spitting rain are my nemesis for about Â¼ mile and then abruptly I pop out into blue skies for a Â½ mile, rejoicing quickly as I enter back into the rainy, gray muck; Iâve never experienced anything like it.

See the Lava Formations Up Close

The drive starts near the park visitor center and goes through dense rain forest, steam vents, and old tunnels formed from lava tubes. It didnât take long to pop out of the rain forest into a barren lava land. I immediately pull the car over to observe this jagged land of lava formations closer. As soon as I open up the car door the wind whistles and howls past me like an angry beast. There is nothing to impede the vicious wind except for a few sad looking trees sparsely taking root. I walk around the lava rock carefully as the sharp edges threaten to poke through my soles of my sandals. 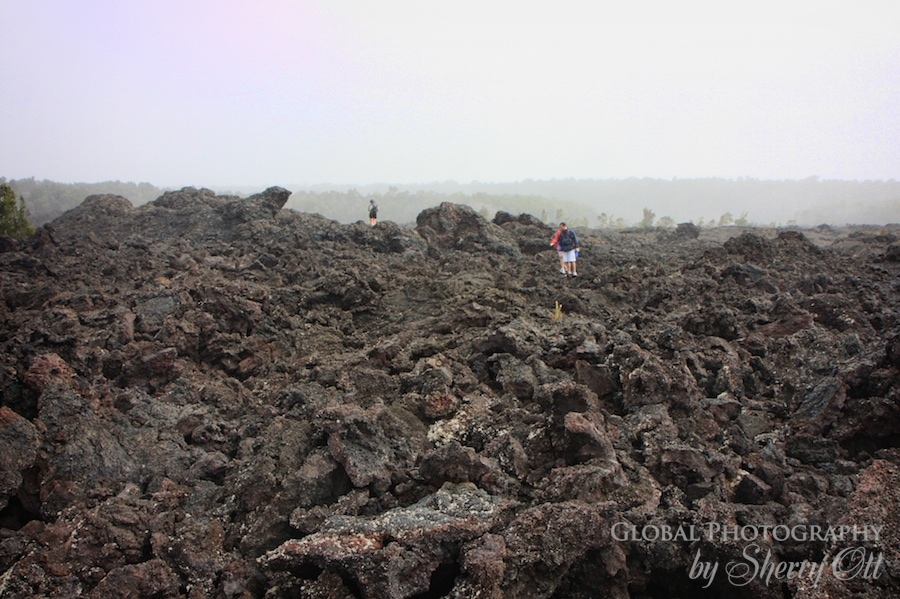 Visitors to the park walk on the jagged lava fields

I continue the decline towards the coast on the two-lane road. I stop every time I see something surreal; which is quite often on this road where surreal seems to be the norm. I sort of feel as if Iâm landing among the pages of a Dr. Seuss book as I stop to stare in awe of the bright orange plants surrounding dead tree limbs. It is as if the ground is on fire and the flames are dancing around the trees. 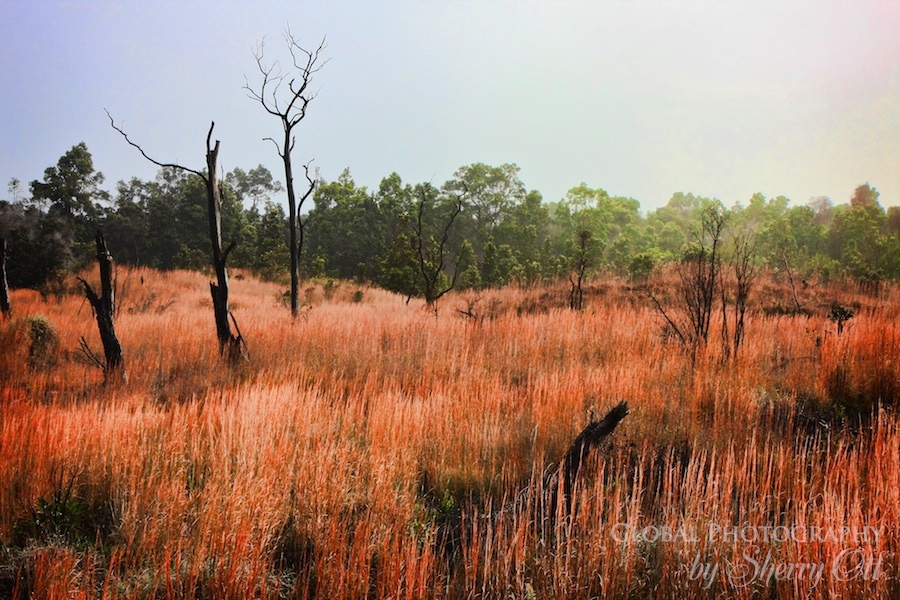 The ground is on fire!

Learn About the Different Types of Lava

I stop at a pit crater and peer over the edge and notice how the lava seems to take on different forms; sometimes smooth (called Pahoehoe), and sometimes jagged (called Aâa).

At that moment I hear a deep rumble. Shit â is Pele speaking to me? My instinct immediately tells me to run!

I hear it again and realize I have nothing to fear, itâs only my stomach announcing that it would like to eat the sandwich I bought prior to entering the park in the town of Volcano. Yes, the town is actually called Volcano; that town sounds like itâs asking for trouble if you ask me. 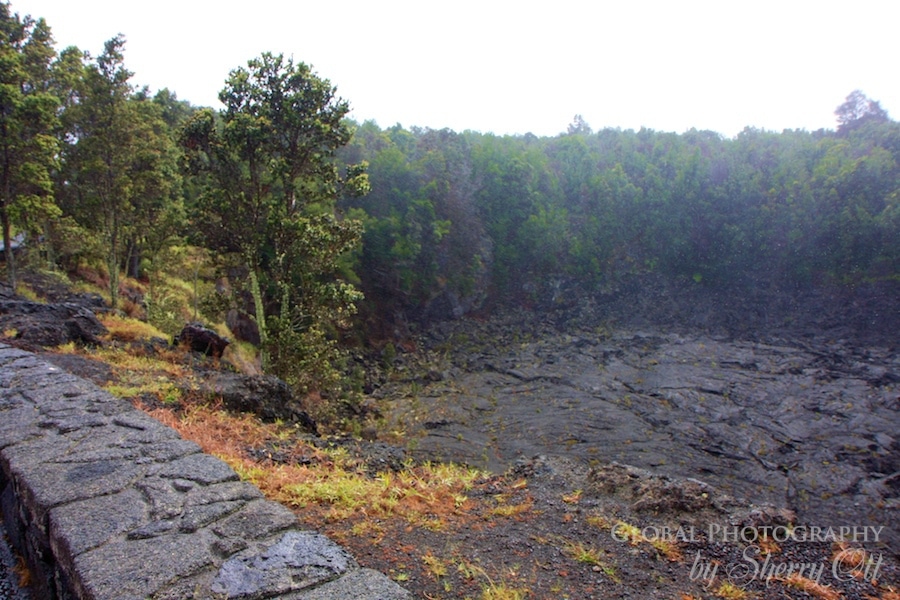 A pit crater skirts the road

Picnic Among the Lava

I drive a little further down the road and I see it, the blue Pacific waters stretch out beneath me. I feel small and insignificant in this battleground of Pele and Mother Nature. But my stomach is calling the shots now so I find a perfect little picnic spot to look over the coast while I am perched on a mound of lava. 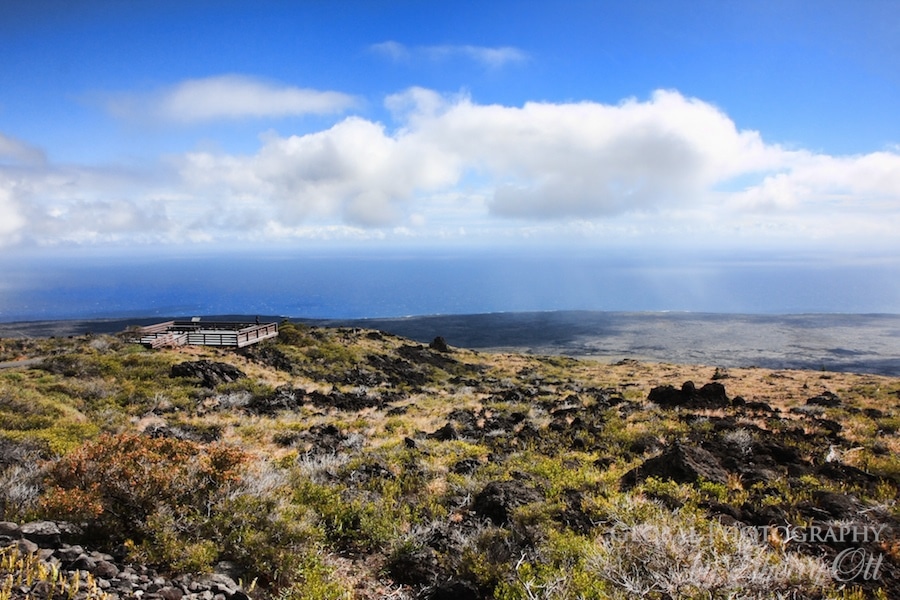 The Drive Down to the Ocean

My stomach satiated, I continue to drive down the hairpin turns and my ears pop. All of a sudden a lone tree catches my eye. It stands tall and proud among the lava that had engulfed it years ago; it is begging me to take its picture saying look at me â I survivedâ¦sort of. Yet I have a sinking feeling that Pele will not stand for that arrogance much longer. 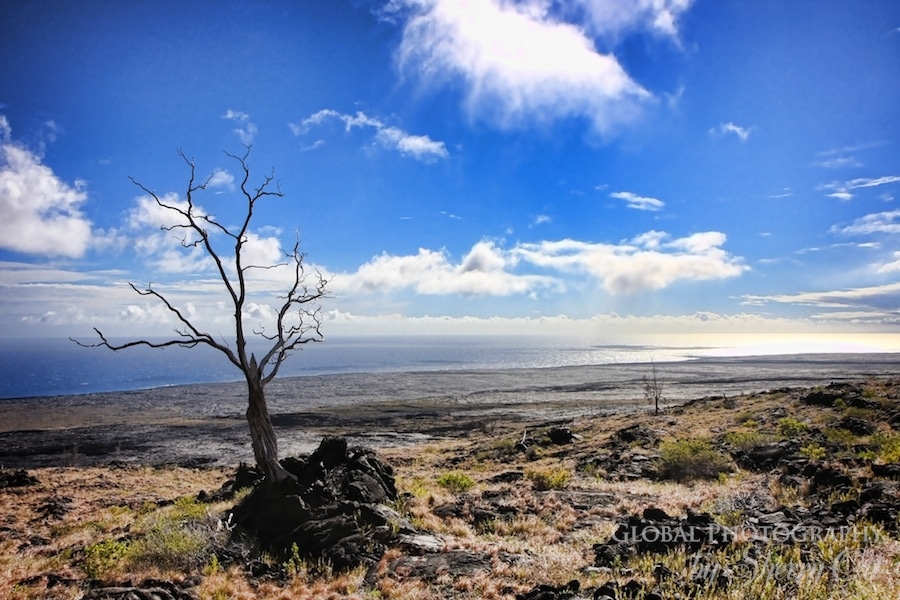 Back in the car I drive further down towards the coast where the lava rock has an almost chocolaty color. It glistens in the sun as if it was a giant pan of chocolate brownies baking in a pan. Maybe this is Peleâs peace offering to Mother Nature. A girl can never resist chocolate! 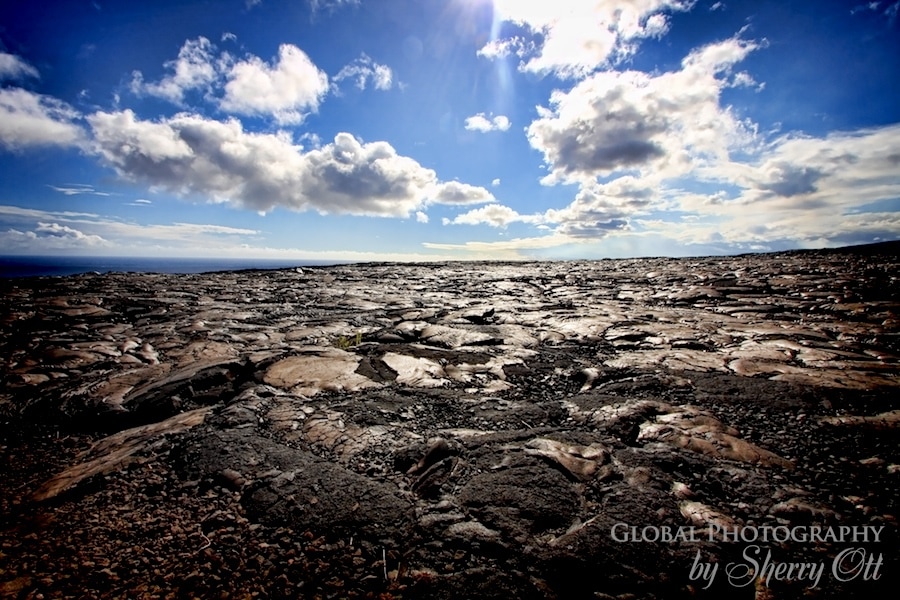 One giant pan of brownies!

The End of the Chain of Craters Road

I open up the windows and let the sea breeze enter the car. The air is thick and smells of the ocean. The LAVA rock station is now playing old Jefferson Airplane; life is good. I think to myself they should have a song called Lava is a Battlefield; that would be fitting for this place. Lost in my thoughts, I abruptly hit it – the end of the road.

Really, this is where the road ends; not because of the coastline, but because of Pele and her lava. In 1988 lava flow engulfed the road and flowed right into the ocean and ultimately grew the Big Island bit by bit. Itâs as if Pele provides sacrificial land to Mother Nature.

You can still see the road in spots, which provides an eerie feeling of destruction. I walk onto the mound of lava which goes on for as far as my eyes can see and notice the last sign standing.  The Road Closed sign stands defiantly among the lava depicting the battle of man-made verses nature. It appears to be a standoff. 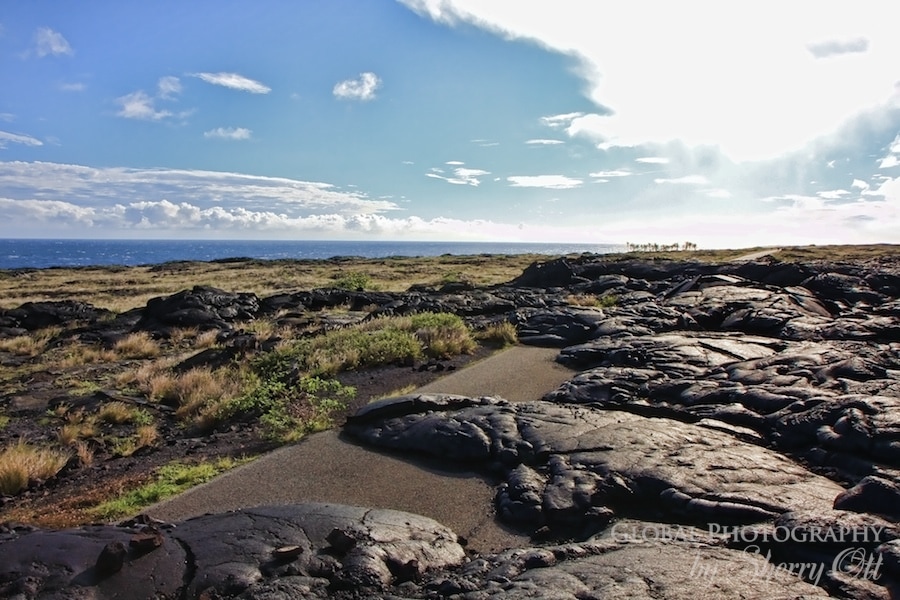 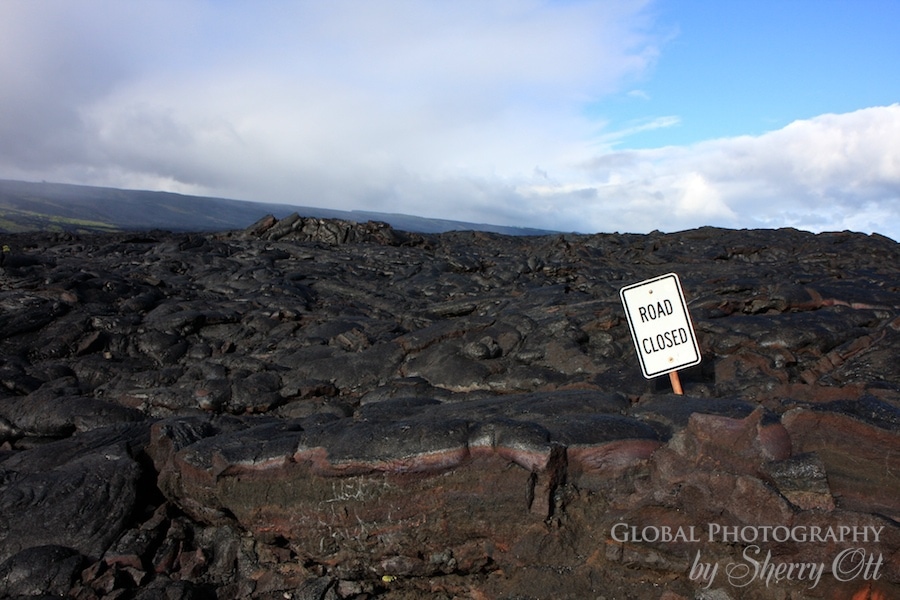 The road closed sign survived the lava flows – a miracle!

At the End of the Rainbow…There’s Lava Of Course

I walk around on the lava formation a bit longer thinking about what it would have been like to be here in 1988 to witness Peleâs spectacle. Then as if Mother Nature can read my mind, she makes her presence known. She provides me a colorful rainbow above Peleâs wrath.

The battle continues on the Big Island. 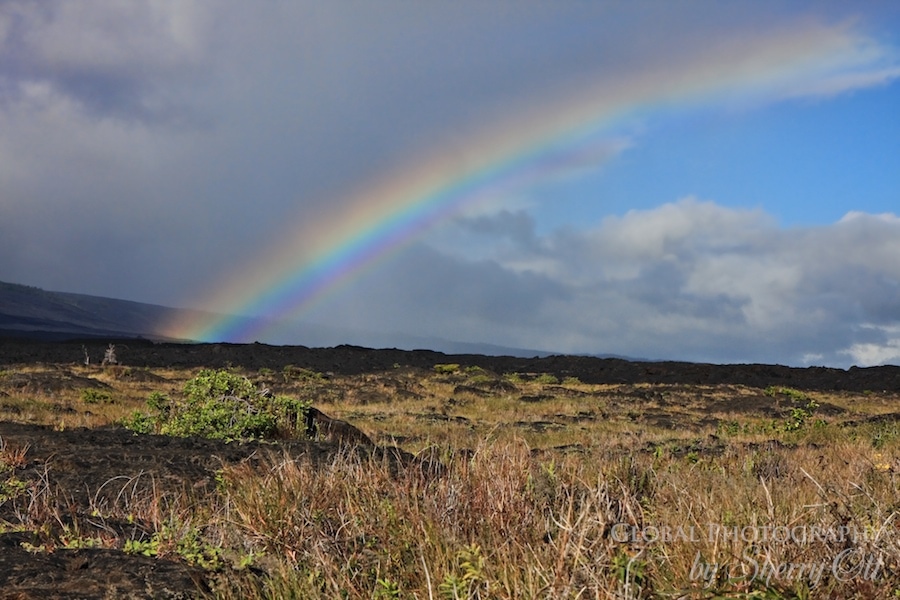 My drives ends at the rainbow – seriously could this be any more perfect?

How Long Does it Take You to Drive Chain of Craters Road?

It honestly took me most of the day. It’s not actually that far, but there’s so much to see and so many places to stop and walk around! I was pretty slow and stopped for a picnic too.

The drive is 19 miles, and it probably takes most people 3 hours.

Don’t Want to Drive it Yourself? Take a Tour!

You can also tour the entire Volcanoes park with a guide, including the Chain of Craters Road. I spent another day touring the park and surrounding area learning even more about volcanoes, lava, and Pele!

15 Responses to "Chain of Craters Road: How to Enjoy this Barren Landscape"