The Birth of Land on the Big Island Hawaii 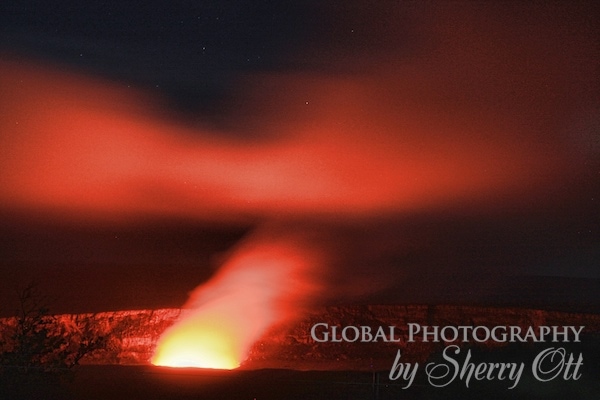 I stand looking out over the jagged landscape; toppled-over trees without bark and a silver sheen provide a contrast against the dark petrified sea of lava. Occasionally I see a tuft of green sprouting up as if it was trying to reach to the sun. I imagine these scarce green leaves sprouting out of the hard lava core and screaming out, â Life!â at the top of their lungs. I walk across the years of devastation, with each step the rocks crunch as if glass is under my feet. I stop and plant my feet firmly on the ground as I survey the area; I can feel the energy. The energy is deep beneath me, bubbling, rumbling, and aching to get out; I can feel it in the soles of my shoes. This land is alive; the Big Island of Hawaii is alive.

This Isn’t Your Average Tour

The tour guide, Taj, asks us all to introduce ourselves and say what we are passionate about; I knew right away this wasnât your average tour. This âice breakerâ takes place with my fellow tourists in the 13 passenger van driving towards Volcanoes National Park to witness the unstable ground we are all vacationing on. This is going to be a long day, a 13 hour tour, and getting to know each other seemed like a pretty reasonable idea.

Even though outside of my window the landscape appears very foreign to me, there is no mistaking that we are in the US when the waiver form is passed around and all of the seat-belts in the van are functional. Taj explains we are traveling between the worldâs two largest mountains, Mauna Kea and Mauna Loa, but they donât look like they deserve that title if you ask me. They seem like barren hills rather than mountains; however their mass comes from below the surface. âBelow the surfaceâ seems to be the theme of the Big Island.

Taj chats away on his microphone non-stop as he drives along the saddle road. He begins by informing us volcanoes are simply giant masses of weak rock. The volcanoes on the Big Island are considered shield volcanoes, which are âbuiltâ entirely of fluid lava flows. The lava is thinner and takes less pressure to erupt; it oozes out making it easier to view and get close to. Taj is more than an enthusiastic guide, he has a degree in environmental studies; today is going to be a learning experience for all of us. However he not only discusses the science of volcanoes, but he starts to tell us about the rich folklore of the Big Islandâs volcanoes and the story of the goddess of volcanoes, Pele. 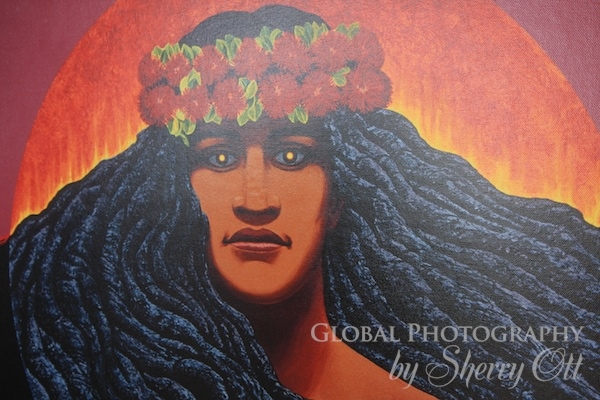 The scary and beautiful Pele

A Voyage Into a Lava Tube

Taj points out the puâuâs, which are small hills created from spurting lava in flank eruptions. The puâuâs look out of place in the middle of the flat landscape; like a zit on the Big Islandâs forehead. We eat our box lunches in the van as Taj prepares us for our first stop, a trek inside a lava tube. A lava tube is actually as scary as it sounds. When itâs active, itâs a conduit through which lava travels beneath the surface draining lava from an eruption source. However the lava tube we are trekking through today is extinct; the lava flow has cooled and formed a cave like structure.

I know just how much I like Taj when he says we are skipping the âDisney versionâ of a lava tube (aka Thurston Lava Tube inside the park) and instead going to the real deal with no tourists. We get out of the van and Taj passes out rain coats and flashlights; Iâm liking the non-tourist lava tube already. Kaumana Cave is an extinct lava tube which once carried molten rock from Mauna Loaâs upper rift zones down to the ocean.

We descend deep into a damp cave, ducking jagged rocks and carefully placing each step along the slippery rocks. Taj takes us into the mouth of the lava tube and invites the adventurous among us to follow him deeper into the tube. I go willingly, walking through water that is ankle deep for another 5 minutes to where he is stopped. He tells the few of us who followed him to turn off our flashlights and we all get to experience complete and utter darkness. He lectures us on the formation of the tube and tells us we can find them all over underneath the island. They are like a vein system in a body, once again reminding me that the Big Island is alive. 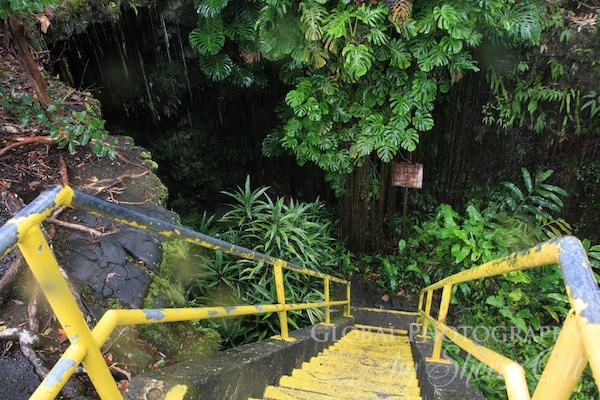 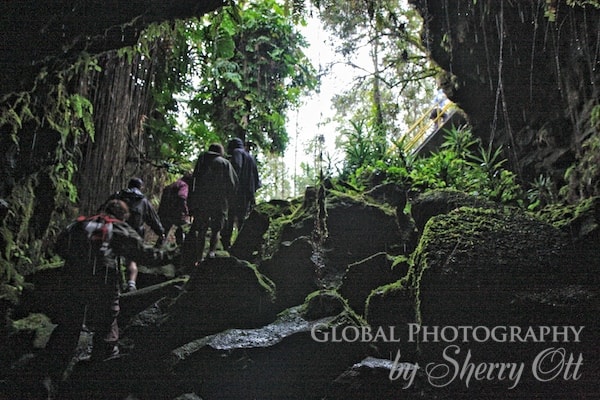 Hiking out of Kaumana Cave

We stop at the Halemaâumaâu Crater near Volcanoes National Park visitor center and Jagger museum. Taj walks us through the museum intertwining the science with the folklore and letâs us view the Halemaâumaâu crater by daylight . The crater is impressive at it spews out vog, but Taj informs us it will look completely different at night when we return. I love the anticipation he builds in us. 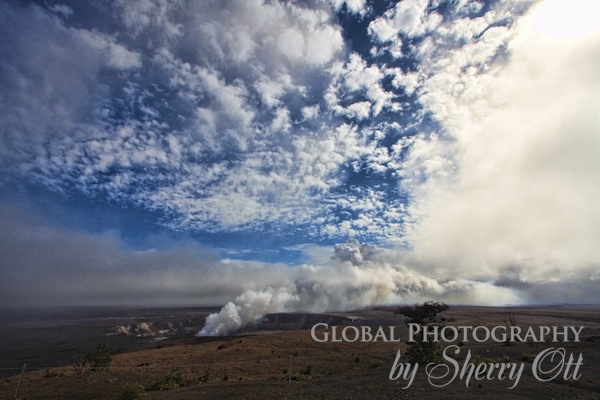 This area of the park is literally bubbling with activity. We hike a trail around the steam vents and Taj points out hardly noticeable plants and flowers describing them to us and telling us the Hawaiian mythology associated with them. The smell of sulfur and bright colors of chemicals make the landscape look like an experiment in a petri dish. The hike is very moderate, but Taj makes it interesting and fills our heads with even more information. 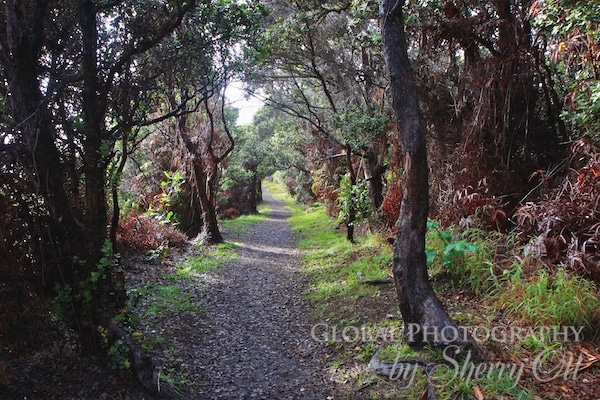 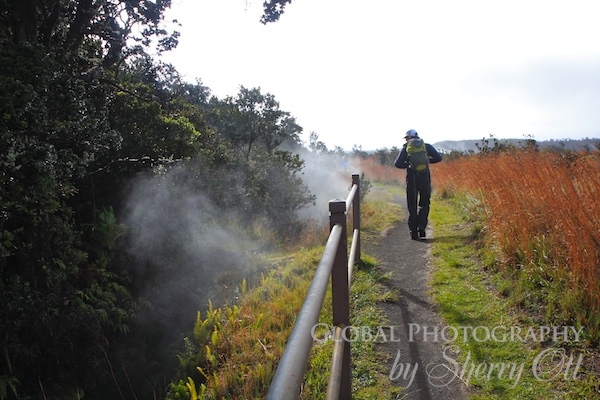 Taj hiking by the steam vents 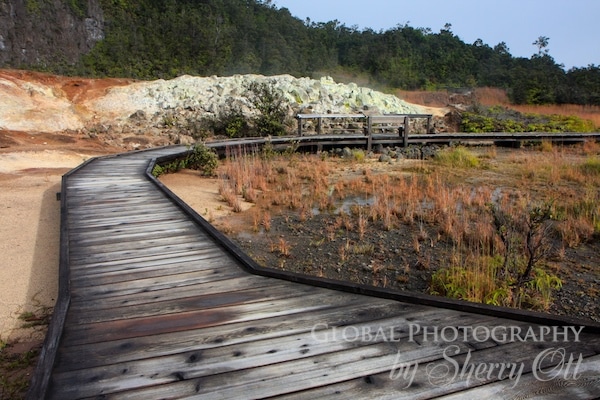 Chemicals oozing from the surface

We get back into the van and drive down the Chain of Craters road stopping along with way to see various lava formations, dangerous pit craters, and hearty plant life. I am left in awe of the power beneath me and the havoc it could wreak at any moment. Yet Iâm also considering this same dangerous land Iâm walking on as the beginning â the birth. Itâs a strange dichotomy that leaves my head spinning.

Maybe Iâm feeling light headed because Iâm hungry, so our picnic dinner down at the coast comes at the perfect time. We drive to the end of Chain of Craters Road where the island is expanding as lava flows into the ocean. Although lava flowing into the ocean is not currently visible (and hasnât been for a long time), you can still imagine it as you peer down the jagged coastline. 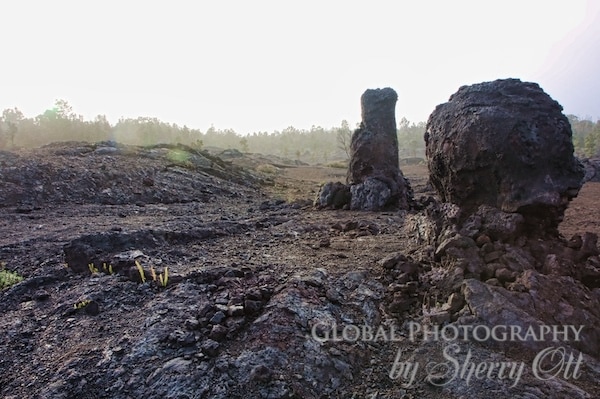 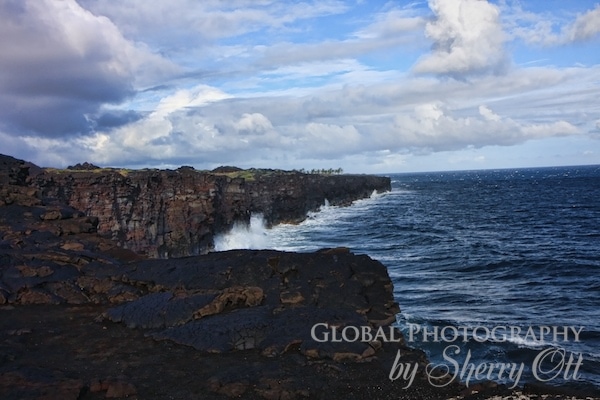 We have dinner by lamplight while Taj shows us his personal videos that heâs taken as he and some of his friends have gone lava chasing around the island. Lava chasing is like storm chasing, and it sort of explains why Taj is so enthusiastic about teaching us on the volcanoes and the ecosystems here. Volcanoes and specifically the Big Island is his passion.

In darkness we drive back thru the Volcanoes Park and learn itâs the only national park open 24 hours. We park again at the Jagger museum to view the big finale to the tour, the glowing lava of Halemaâumaâu Crater. (see the first photo) As we snap photos on tripods, Taj is able to âconnect the dotsâ from the full day of touring with a last story about Pele and her immortal friends.

As we drive back to the Kohala coast, Taj was quiet for the first time all day as he let us soak in all of the knowledge of the day. It was a long but educational, fun day. In one day we did 25,000 feet of elevation change and drove over 300 miles. Taj put on Hawaiian luau music and I dozed off in the back of the van dreaming about the birth and continual growth of this amazing island.

â¢ This was a well organized, informative day long tour. The customer service from booking to the day of the tour was very high quality.
â¢ Lots of knowledge dispersed on the ecosystems, volcanoes, and mythology.
â¢ Meals (lunch and dinner) were excellent and plenty of drink and snacks were provided throughout the day.
â¢ Raingear and warm weather gear was also provided which was a nice touch since we were traveling through various climates all over the island in one day.
â¢ I loved the fact that we got off the typical tourist trail and explored the lesser-known lava tube.

The Could Be Better:

â¢ I would have loved a bit more hiking, but we had a full day to fit many things in so the hike was only for about 45 minutes and very easy. It was more of a gentle walk than a hike.

Would I recommend it:

Yes, even though I had already been to Volcanoes National Park on my own, I was able to learn so much more and see many more things than I ever could have independently. I loved our guide and his passion for what he did was evident making the whole experience fun as opposed to dry. It was a reasonable price ($179) if you consider the fact that you drive 300 miles, had two meals and entrance into the park. It was a long day, but I was never once bored. If you are going to spend 13 hours with a guide, they better be good, and Taj was certainly the right person for the job. 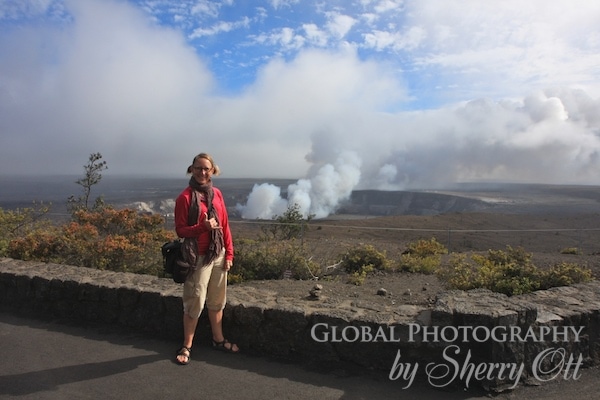 Photography from the Volcanoes Tour

Disclosure: Hawaii Forest and Trail hosted my Volcano Twilight Adventure. However, all of the opinions expressed here are my own â as you know how I love to speak my mind!