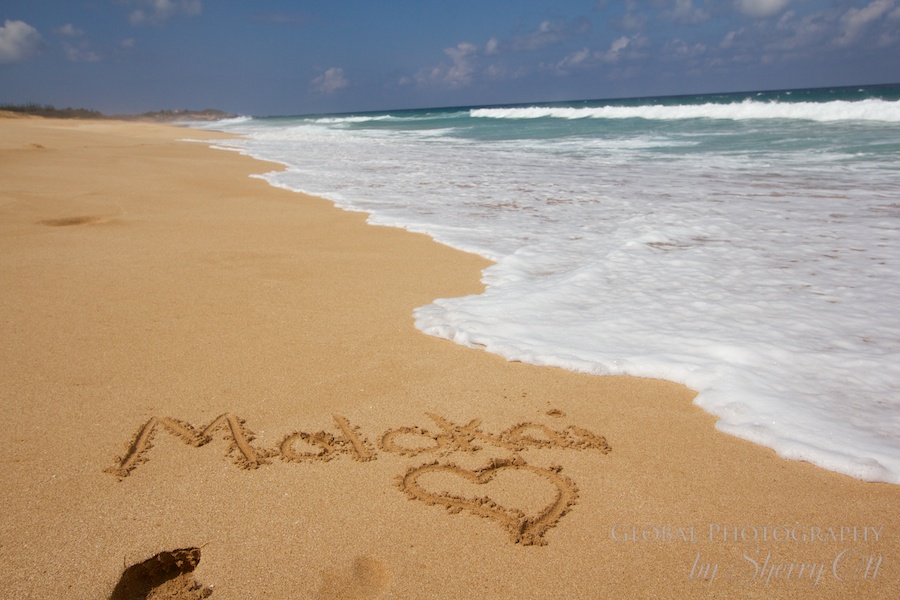 âActually, the best thing you can write about Molokai is to tell people not to come here,â she said. I was alarmed â I was on Molokai, one of the 6 islands (that are visit-able) that make up Hawaii, in order to experience and write about it as a holiday destination and I was being told that people shouldnât come here. This was some Freaky Friday kind of stuff. âMolokai isnât for everyone, itâs not like the rest of Hawaii. Itâs slow, itâs not touristic, itâs the original Hawaii,â she went on to explain. âItâs for people who really want to slow down and experience the old Hawaii and itâs culture. For those people, they will fall in love with Molokai. But if people are looking for tours, resorts, and decadent restaurants â they wonât find it here.â 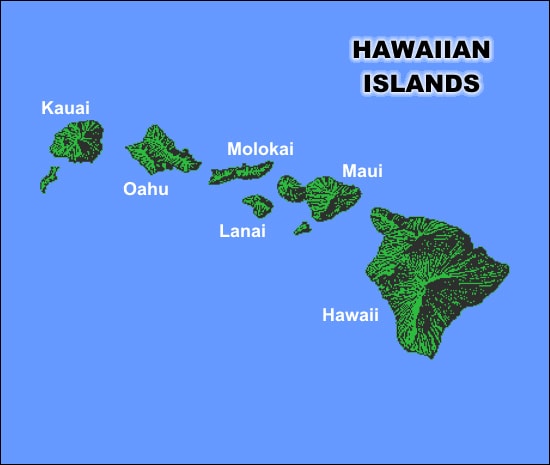 This was my 6th and final island of the Hawaiian Island chain to visit and I was already in love with it based on this description alone. I had heard so much about Molokai being untouched by tourism and how slow and normal it was that I was tingly with excitement as I made the short plane ride over to this agriculture rich island. As I thought about that conversation, I knew that it wasnât that they didnât want people to travel to Molokai, they just simply wanted people to know that âone of these [islands] is not like the otherâ and understand that Molokai might not be for everyone.

However, I was pretty sure that Molokai was going to be for me. As soon as I walked off the plane, picked up my luggage at the tiny open-air airport, and drove away, I saw a handmade sign that read, âAloha, Slow Down, This is Molokaiâ. This was the best welcome to any destination I could imagine. 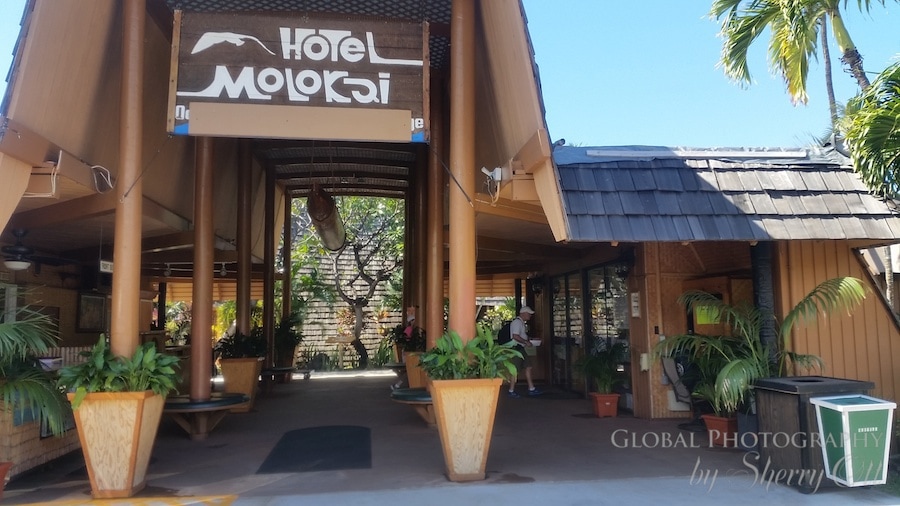 My friends hadnât lied to me, after just a few hours on the island I had to agree â this island wasnât developed with tourism in mind. I was staying in the ONE and only hotel on the whole island aptly named Hotel Molokai. An adorable yet quirky hotel right on the water with a highlight being the âMeet the Manager nightâ with drinks by the pool bar! Michael, the Manager, is a Molokai character worth meeting â heâll have you in the Aloha spirit in no time!

There are a few other places to stay; 5 condo complexes, and some home rentals â and thatâs it. All in all thereâs a total of 400 rooms on the whole island. And while we are discussing numbers, there are only 2 liquor licenses for establishments on the island â so wipe those visions of cabana boys, mai tais and rum shots on the beach away. However, luckily for me, Hotel Molokai holds one of the liquor licenses!

Molokai Tourism – Things to Do

However Molokai does have a tourism office. Julie Bicoy (strangely similar to Julie McCoy the Cruise Director of Love Boat fame), dishes out visitor information and advice on how to get the most out of your unique time in Molokai. I talked to Julie to find out what she normally tells visitors to do. She said she always points people in the direction of the cultural attractions like Halawa Valley and Kalaupapa as well as more adventure activities like kayaking. Then she suggests the weekly and monthly events that are going on in town â farmers markets, book readings, cultural events, and town gatherings. 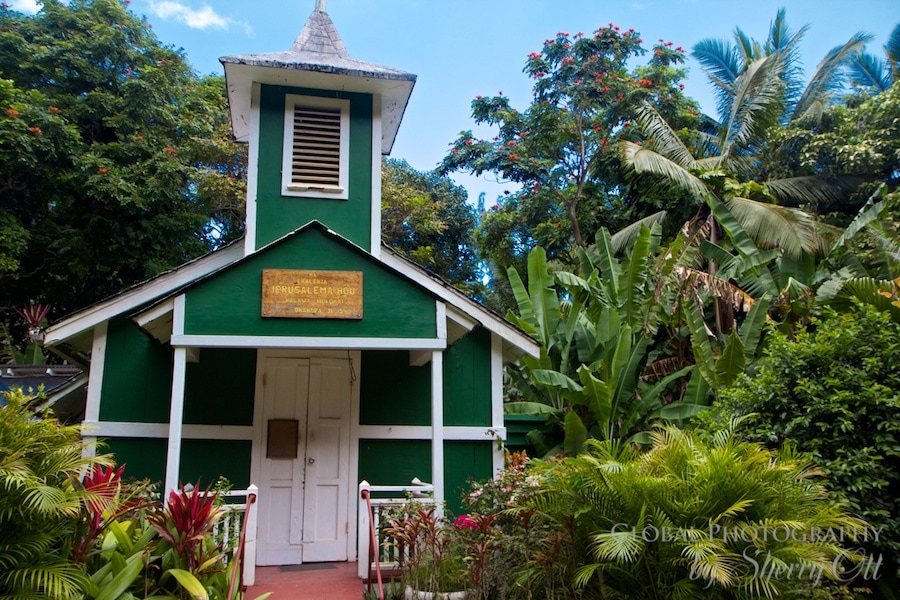 A Molokai church nestled among green

But mostly she tries to stress the idea of âLet the moments happenâ. When you come across a picturesque beach, charming church, or intriguing sign, stop and take a look. If a local starts to tell you stories, listen. What makes vacation great is connecting, creating relationships, and talking story. I adore this Molikai-esque vision of travel; itâs not about the tourist stops or bucket lists, itâs about connections.

The best thing to do is rent a car from the airport and take off exploring. As I was driving towards Kalaupapa lookout I noticed it little by little at first, and then it seemed to be more noticeable as we turned the corner. Grass was growing in the cracks in the pavement on the main road. Apparently the roads get so little traffic that grass is able to thrive on them! Julie told me that any paved roads were fine to explore, however once it turned to gravel â then I was on my own. Also be prepared, this is an island where picking up hitchhikers is encouraged and normal, so donât be alarmed if you see a few thumbs. 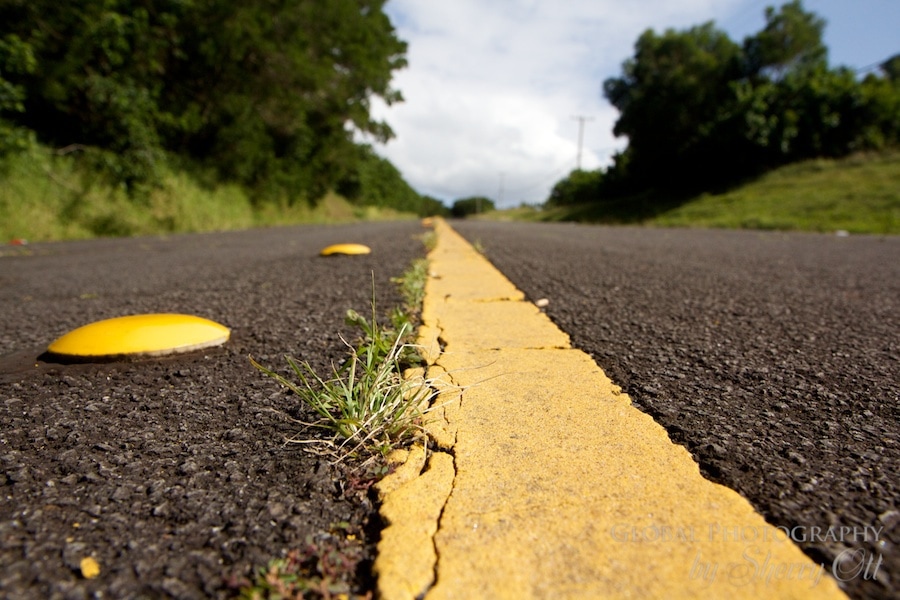 Grass grows in the middle of the road.

And be sure not to miss the Molokai West End Beaches. Molokai has a lot of beautiful beaches on all parts of the island. However, not all of them are safe for swimming and snorkeling and many are difficult to reach even if you do have a car. You will be amazed when you arrive at Papohaku Beach â itâs one of Hawaiiâs longest white sand beaches. Three miles long and youâll rarely see anyone else on it. 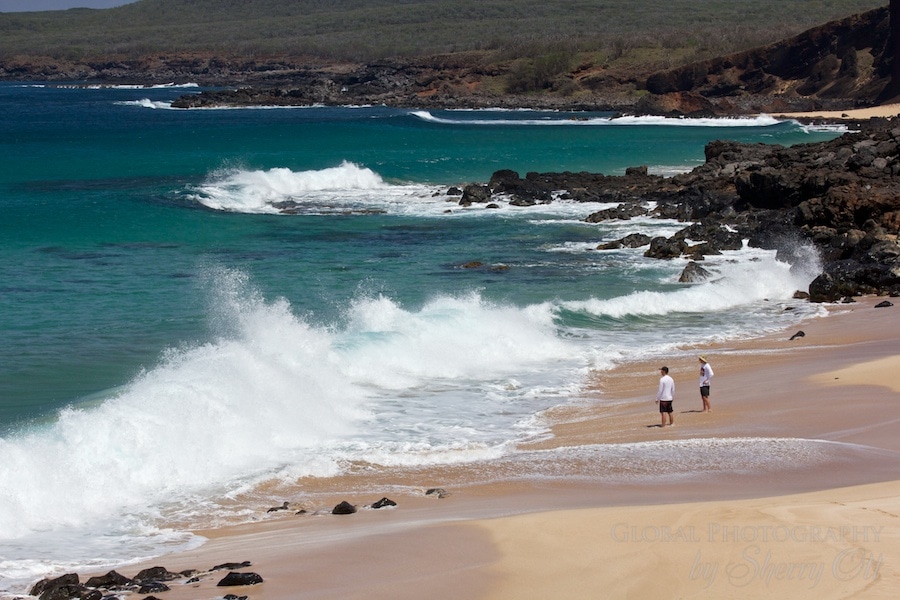 I learned pretty quickly that people donât travel to Molokai for the foodâ¦unless you really like bread. The island is filled with little basic cafes and drive-ins, but no fine dining. However, one must-do experience on Molokai is the bread run. No â it has nothing to do with actual running. The Kanemitsu Bakery has been gracing Main Street for 80 years, and serves as a traditional bakery. However at night it transforms into a seedy prohibition-like experience. However, itâs not booze thatâs being secretly made and sold, itâs bread. When the sun has gone down and the clocks strikes 8:30PM, just follow your nose down a back alley behind the bakery. There youâll find a dimly lit corridor (they type your mother warns you about) leading you to a little window where theyâll take your bread order. Choose from cinnamon, butter, strawberry, blueberry, and cream cheese toppings, exchange money and youâll walk away with a brown paper bag filled with hot bread. And itâs not just a little slice of bread â itâs a giant round of bread bigger than your head. 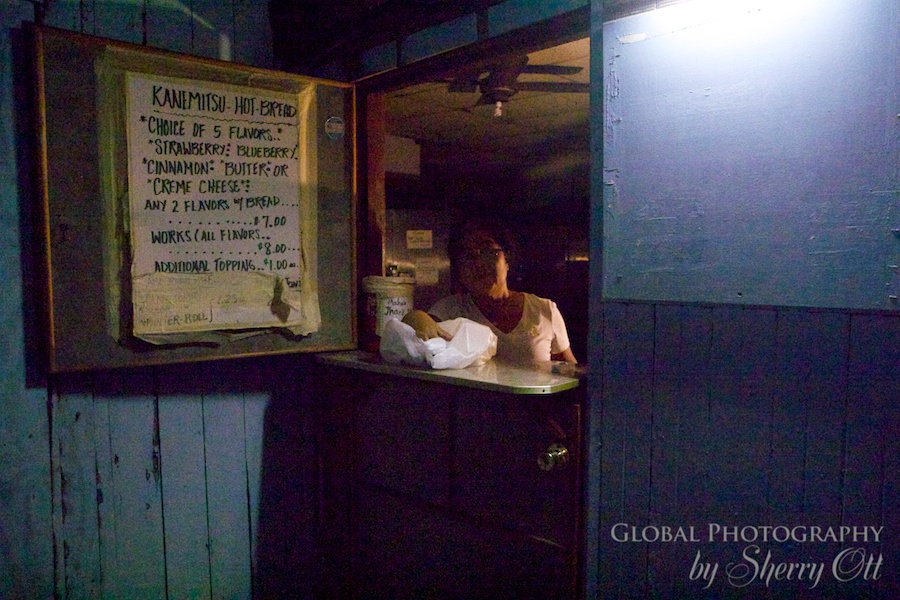 Molokai is called the Friendly Island in Hawaii, they even have a market called Friendly Market. I wanted to put it to the test; just how friendly were the people? I decided to test this friendly title by spending an hour walking around the 2 block Main Street and see what happened â would I make friends? I encountered a couple of guys selling fish from their truck. They were indeed friendly telling me all about the fish and where they caught it on the island and asking me about myself. I walked to the Friendly Market where the check-out clerk asked me if I was a photographer when she saw the huge camera around my neck.  We chatted for a bit as I paid for my oatmeal and left. 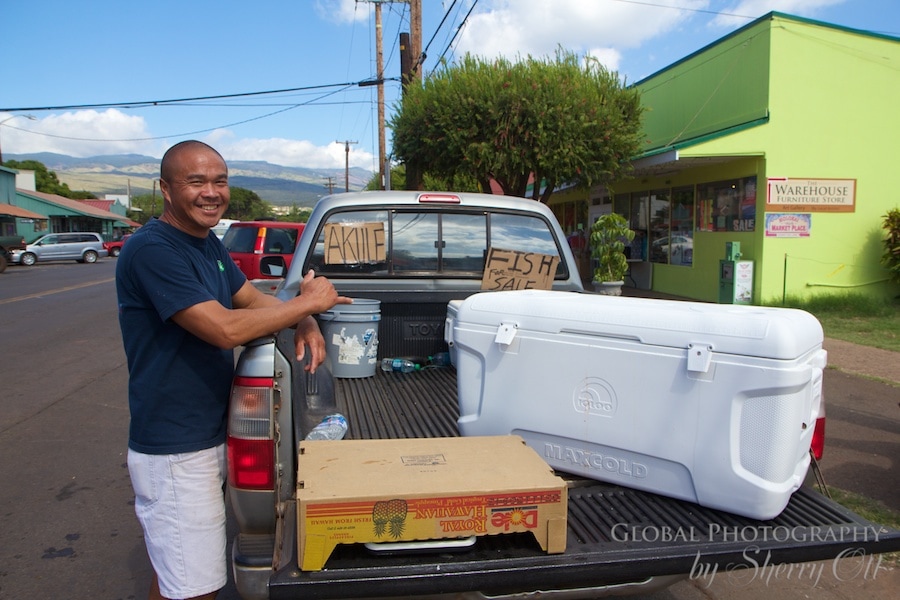 Selling fish out of his truck

As I continued down the street a guy leaving the Filipino restaurant nearly ran into me â hmmm – not very friendly I thought. After apologizing he looks at me and tells me I should go inside the Filipino restaurant and eat.
I look at him and ask âWhat are you eating?â
âHere hold this,â he says and hands me his drink, shoots me a big grin, and opens up his to-go carton so I can see whatâs in it. Ok â I was wrong â he was very friendly.

As I sat eating my giant loaf of left over cinnamon butter bread from the night before, I realized that by positioning themselves as the anti-tourism island, they have indeed become the island that people want to go to. Think that sounds weird? Then think back to every boyfriend you had growing up â thereâs a reason why the aloof, bad boys were always loved.

And finally I walked into the bookstore where I met the owner Terry, she was like the Molokai Ambassador doling out advice on what to do and where to go. However when I asked her about Molokai she said, âPeople who visit here have two reactions, Oh this is it? And some people come and day ohhhhhh this is it!â

My advice, donât travel to Molokai if your reaction is going to be the first one.

DON’T FORGET!  My Career Break Ebook is only available for a week as a part of the Paradise Pack.  Get 20 travel products by 20 travel experts worth over $2000 for just $197 – ends June 7th! 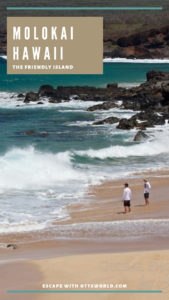 Disclosure: I was a guest of Molokai Visitor Bureau for my trip, however all opinions are my own.

84 Responses to "Don’t Travel to Molokai"