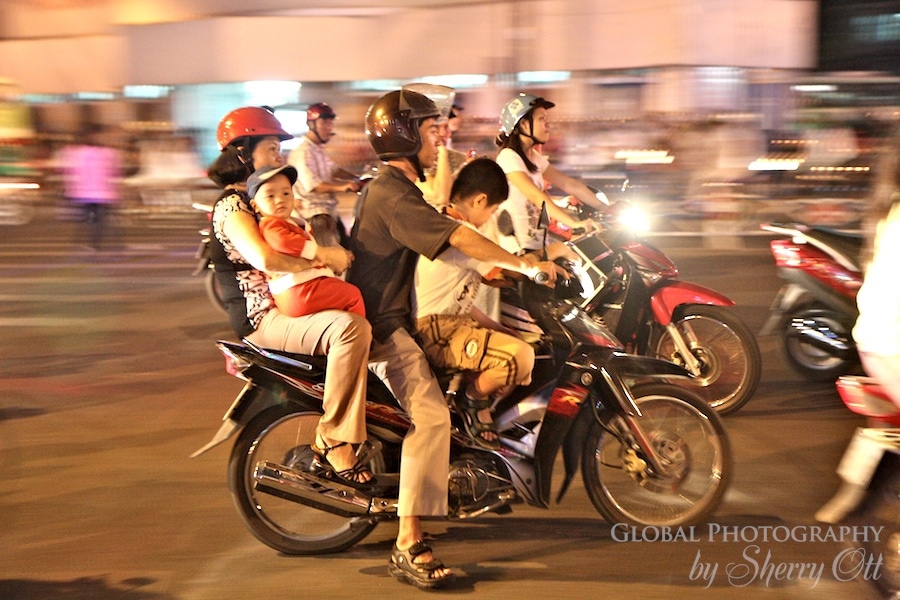 One of the most unusual sites I witnessed in my travels was experiencing Christmas in Asia. I had been living in Ho Chi Minh City Vietnam for 3 months when December 25th rolled around. In a country with no real religion, and no westernized consumerism (yet), Vietnam surprised me with their Christmas spirit.

Christmas in the western world seems to be more economic consumption than religion these days, so why should that be any different in Vietnam? The strange thing is that in Vietnam it seemed to be about neither. There was very little reference to anything religious about Christmas and there was really no one out shopping for gifts except for expats. So why do the Vietnamese care about Christmas? I never really knew, but my first guess was that they like any reason to drive their motorbikes around the city and get out of their homes! I may never understand the Vietnamese fascination with Christmas, but in the meantime, hereâs what I was able to observe.

Vietnamese referred to Christmas as âMerry Christmasâ. For example, I frequently was asked, âTeacher, what are you going to do for Merry Christmas?â I found it kind of charming; it always reminded me that it was a merry holiday. And no matter how depressed I was about being on my own for Christmas, at least I could be doubly reminded that I should be merry.

On December 23rd I walked by a crew working at constructing yet another Christmas light display in District 1. In the US, the decorations start going up on November 1st, in Vietnam they go up on December 21st! As I saw the people frantically working to put their fake snowmen together and the reindeer carefully placed near the door, I wondered if they were going to all of this work to simply take it down again in a week. Iâm assumed not. Why would anyone go to 2 weeks of work to set something up to simply tear it down again right away? Then again, nothing surprised me in Asia. 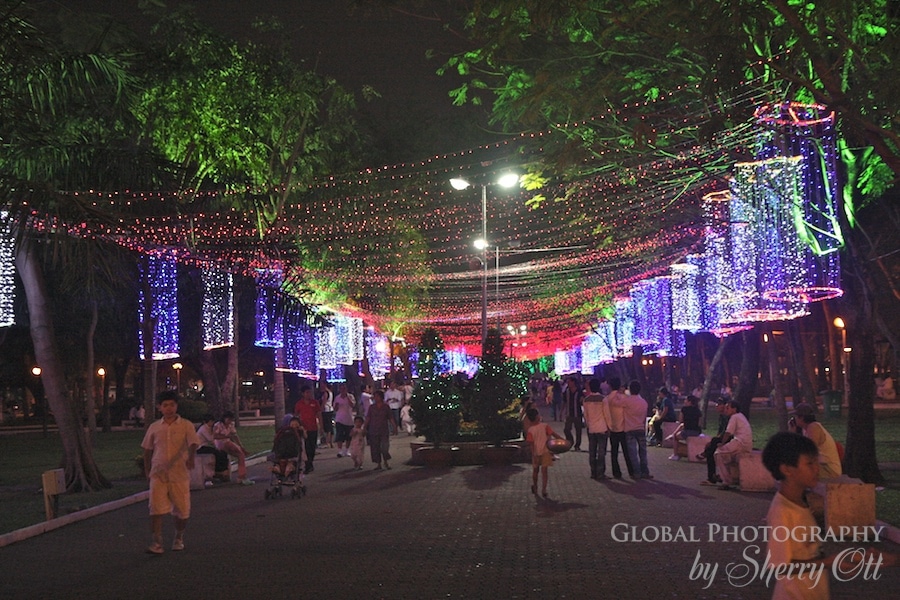 Vietnam was Surprisingly Lit Up for the Holidays

In the center of HCMC near the market exists the pinnacle of all of Christmas displays; I called it the Heineken Snow Globe. No, it was not an actual snow globe, just a large light display shaped like a dome. I pass this monument to holiday beer (oops, I mean holiday cheer), every day on my way to work. I watched it go up piece by piece over the previous 3 weeks. Men dangled from the scaffolding, a giant disco ball was erected, and carefully placed âsnow driftsâ were constructed. Then I finally saw it â the familiar green and white logo â a Heineken sign on the Christmas tree. There were Christmas light displays like this all over the city and many of them were sponsored by Heineken for some reason. I even saw a Christmas tree made of Heineken beer cans! 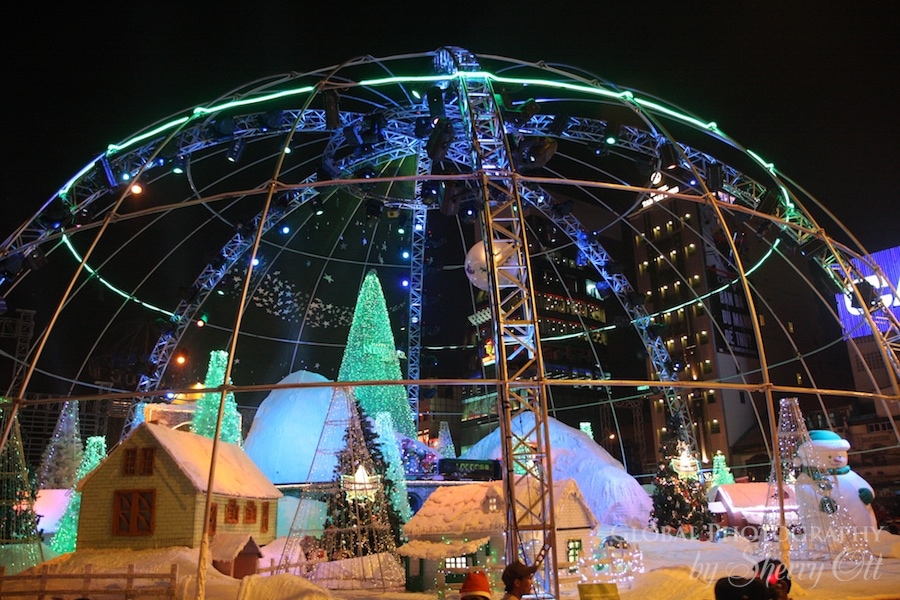 The Festive Smell of Pollution

I thought that the Heineken snow globe was rather impressiveâ¦or tackyâ¦.I couldnât quite decide. That probably means I had been in Asia too long. However, I was not the only one who thought it was impressive, the other 7, 999,999 residents of HCMC also thought it was impressive. I believed this because the viewing of the snow globe was a family affair. Instead of hopping in the minivan, the Vietnamese put their family of 4 on a motorbike and took off to go view the holiday lights in District 1. There were lights hanging everywhere in the main part of the city. Displays of elves, reindeer, snowmen, Santa, and even a Winnie the Poo Santa littered the sidewalks. I supposed these lavish displays were in the same vein as window displays in NYC, but no one had a store front big enough to display their Holiday light extravaganza, so it spilled out into the streets; like most of life in HCMC.

The traffic was as unbelievable as seeing reindeer fly. I had never seen such a massive sea of motorbikes. They just slowly circled around and around looking at the light displays. I walked through the heart of Heineken Christmas Village to capture the absolute chaos and culture of the holiday. After an hour of walking around taking pictures of the traffic, families, kids dressed in Santa suits, and the street vendors; I realized that I couldnât take it any longer. The pollution from the motorbikes was literally going to kill me. 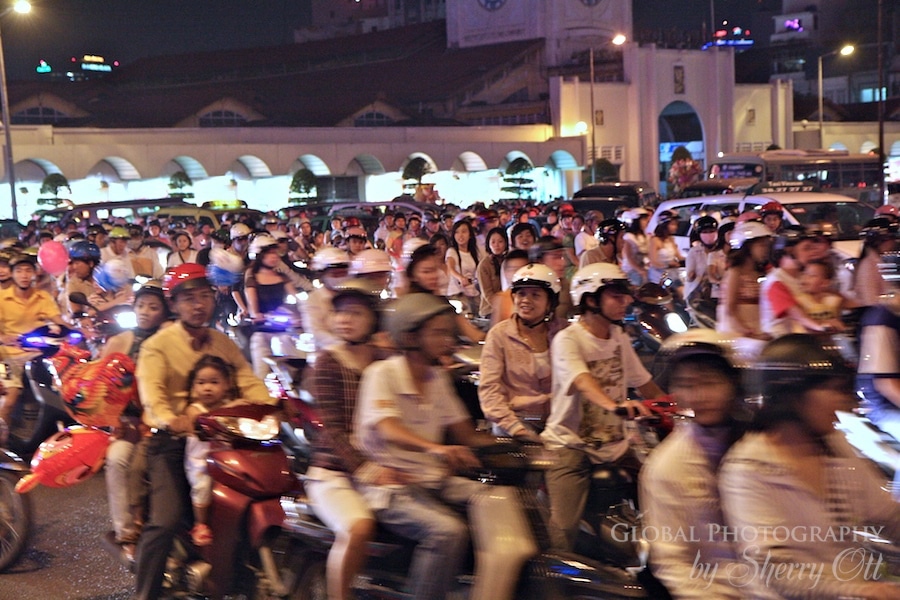 At the snow globe, there werenât only lights strung from all of the trees, and vendors selling little Santa, lollipops, and devil horns (not sure that those had to do with Christmas), but there was also St. Nick himself. Actually, there were about seven St. Nicks. They were all dressed up in their Santa outfits, shaking the kids hands and taking pictures with them. Of course in true Asian style there was no queue, that would be silly; there were just masses of people pushing and shoving to get to jolly old St. Nick. However I was a bit distraught when his belly didnât jiggle like a bowl full of jelly. Instead, the belly was non-existent; this Christmasia Santa was a skinny Santa! 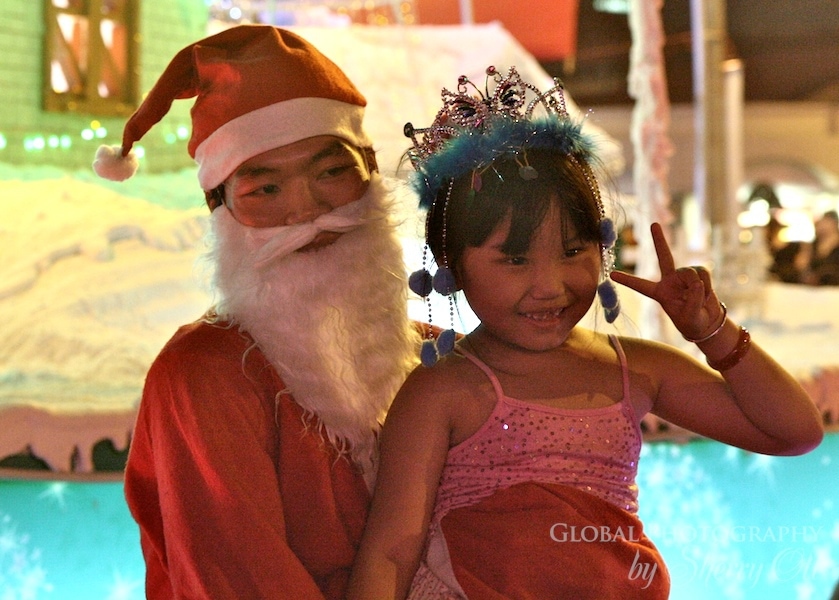 9 Responses to "A Foreign Christmas"