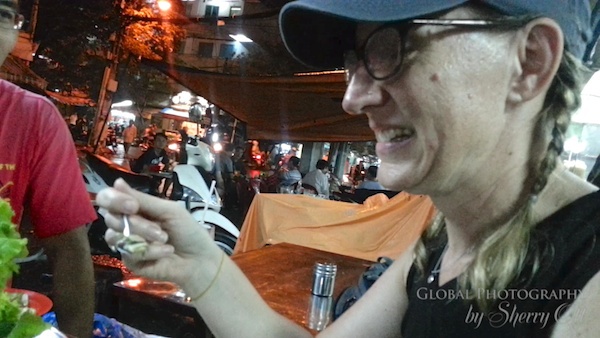 As I looked at the egg (hot vit lon) and I could vaguely hear people providing me encouragement and instructions, but in my mind I kept thinking â how do I get myself into these things?

However I couldnât take the blame for this situation â this was all Evieâs fault. Yes, I’m throwing my niece ‘under the bus’.  SHE said yes. I would have gladly used her ânoâ as an excuse to skip this Vietnamese delicacy. But she said âyesââ¦at least at first.

I normally try anything, âWhatâs that?â I responded cautiously.  I know that Vietnam is known for some pretty odd food that falls off our American normalcy scale.

âItâs a baby duck fetus thatâs been in the egg about 15 to 17 days.â He replied. After seeing my reaction he then continued in a apologetic persuasive tone, âwe eat them as snacks â they are really tasty.â

As if because they were designated as a snack it made it normal. I liked Duyâs line of thinking, but this was going to be a pretty big mental hurdle to overcome.

What is Hot Vit Lon?

What are half hatched duck eggs? They are called balut in the Philippines and are very popular there. I didnât actually know that they ate them in Vietnam. There is normally one difference between the Philippine version and the Vietnam version â the Vietnamese one is younger â about 15 to 17 days, whereas balut is normally eaten at 20+ days giving it a bit more âcrunchâ. You can read more about it here, but this is their description:

âHalf-hatched eggs are basically fertilized duck eggs (a.k.a. fetal duck eggs) that are 16 to 20 days in age. The older it is, the larger the chick and the more pronounced its feathers, bones, and beak. An embryo at 17 days has beak and feathers which are more developed at 20 days. Normally, after being fertilized, a chick hatches after 26 to 28 days of incubation. The taste depends on the breed of duck.â 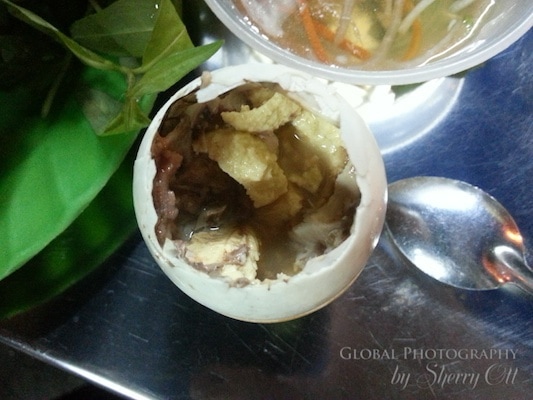 Staring down the baby duck egg. I can do this…right?

However, I have a general rule, you eat what people offer you in other countries. This is how I ended up eating a number of unthinkable things throughout Asia and the Middle East, however I had my niece with me this time and I wondered how daring she would be. I wasnât going to force her into it as I saw her eyes widen and cheeks get flushed with Duyâs description. Evie was intrigued yet cautious, but in a fit of bravery she suddenly agreed to us sharing one.

Time to Taste It

However when they brought the egg out to the table, the yes turned to a no. My heart sank â and apparently so had her confidence. Now I was left to try this delicacy on my own â damn. I knew I wasnât going to back down, I would simply try not to think about the crunchy bits and possible feathers. Simple right?

One of the things that actually made this do-able was that you eat it with the lime/salt/pepper sauce and a green herbal leaf. The lime sauce is what sort of sold me as I love that simple taste. After showing me how to crack the egg open, Duy informed me I had to drink the âjuiceâ once you crack open the top â sort of like a shot.

A shot of baby duck embryo. That makes a tequila shot look like apple juice. 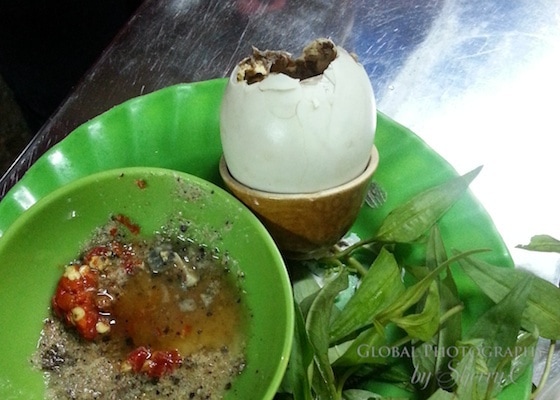 Hot vit lon with the sauces and herbs to ‘pretty it up’.

Evie watched and laughed but when I said to her â âyou know, you only come to Vietnam onceâ  (we had nicely dubbed this #YOVO earlier in the trip) suddenly her face turned to stone as she glared at me. I had said the magic words. Guilt and peer pressure did their powerful work that only they can do. Yes â Iâm a horrible aunt.

However â hereâs how it went downâ¦

Surprisingly if you donât think about the texture of what you are eating, the egg itself tasted really good â sort of savory. Iâd actually even have it again if given the chance. Iâm not too sure that Evie would agree to that â but she was happy she did it and it was one of the first things she told her friends and family about when she returned home. Just going to show you that the more you push yourself, the more you have to be proud of.