How to be a Good First Time Traveler 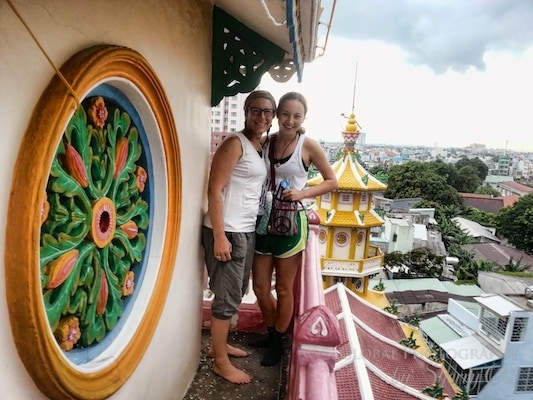 Evie and I at the Cao Dai Temple in Saigon

If you want to know how to be a great first time international traveler â just ask my 17 year old niece Evie. She surprised me on so many different levels on our trip that she left me bursting with pride and reminded me of how important it is to see the world with fresh eyes. This young woman who had never left the country before chose to go halfway around the world to a completely different culture. Most 17 year olds would have missed their family, friends, phone, and comforts of home â but those things never came up. Instead â she lived in the moment, went along with every crazy thing I wanted to do and she led me into crazy things with her!

This was a trip of firsts for Evie:

I observed Evie and picked out a few traits that in my opinion made her an excellent first time traveler. Everyone with an empty passport should strive for these things.

Try The Food Put in Front of You 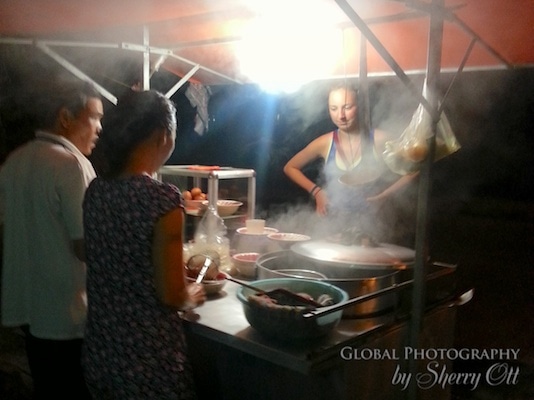 Evie excelled at trying new things â especially when it came to food. Iâd drag her to little dodgy pho stands, give her a bite of something that she didnât know what it was, hand her strange looking fruit to taste, and bring her food back from the market and say âHere, try this.â And she did. The more she did, the more I wanted to feed her more stuff! She even bolstered my confidence in many situations too especially when it came us eating hot vit lon (duck embryo). Some of the things she liked, some she loved, and some she tried but wasnât going to have another bite. The point is â she tried. Everyone in other cultures appreciates it when you at least try the local food â you donât have to like it all. 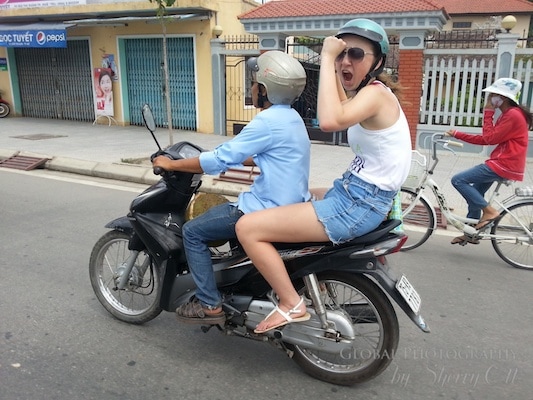 Forget shopping and regular sight seeing. Try to really get to see a country through the locals doing every day things. Our best experiences were the more local experiences we did with our Intrepid tour as well as the things we found ourselves. Evie actually wanted to go to Catholic Mass in Vietnam so she convinced me to go to a local experience that I never would have considered before. If you want to see how a culture worships, then why not go to mass and see how itâs conducted there. We both found it fascinating. We also went to a local water park in Saigon and both found it incredible to watch the family culture and compare/contrast to what weâd find in the US. We ate at local street vendors, rode motorbikes, and went to dinner at local homes. When we came home it was these every day local experiences that she gushed about to her friends, not the shopping or the sites. 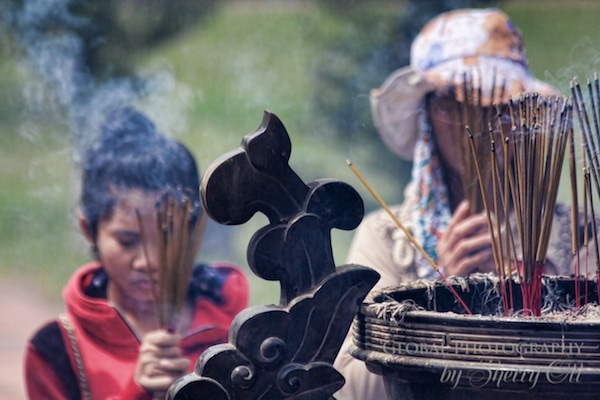 Visiting a temple in Hue

Even though Evie witnessed many different things in Vietnam in relation to our own culture, she never once said something was stupid or wrong. Babies on motorbikes, different religions and methods of worship, different ways of living and living conditions, cleanliness of restaurants, and questionable safety conditions all were hot topics we discussed. They were all great discussions â the type that I had hoped to get into when I travel with my nieces. She accepted people do things differently in different parts of the world. She was curious and asked âwhyâ a lot â but thatâs what you need to do when in new cultures â try to understand, not judge.

Be Open to Possibilities 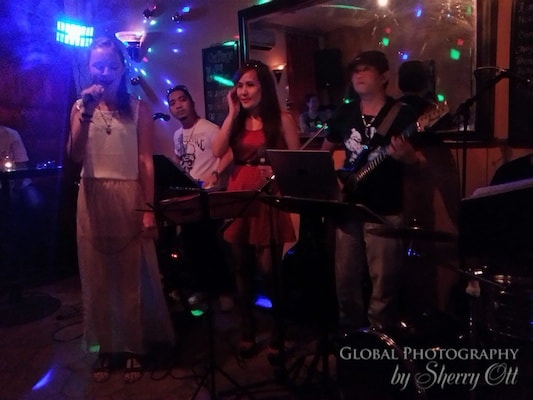 Singing Adele songs with the band in Saigon 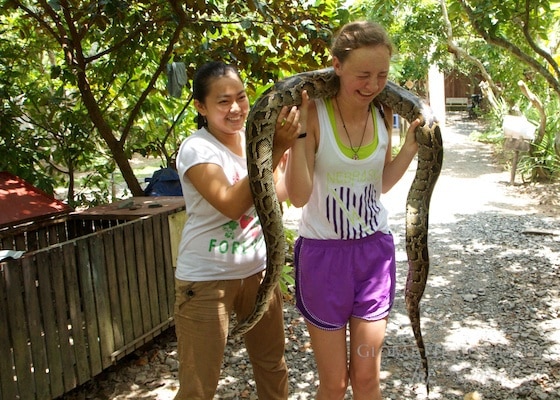 The python incident – a bit terrified.

In the same vein as trying the food put in front of you â say yes to a lot of experiences. Evie and I had a expression âYou Only are in Vietnam Onceâ – YOVO – and it seemed to be what drove Evie to saying yes to everything. Evie ended up singing Adele songs with a Pilipino cover band late one night in Saigon bar, she went on motorbikes, bicycles, boats, and did anything else she was asked to do. Only once did I see her lose her composure â when she said yes to having a python wrapped around her body. She was nervous to begin with, but she did it. However this was the first time I thought she might cry! 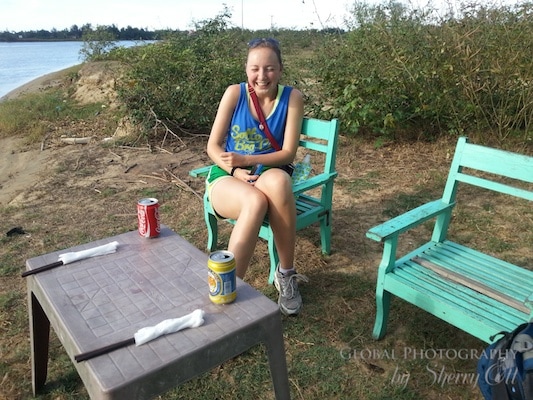 Having a BBQ in Hoi An 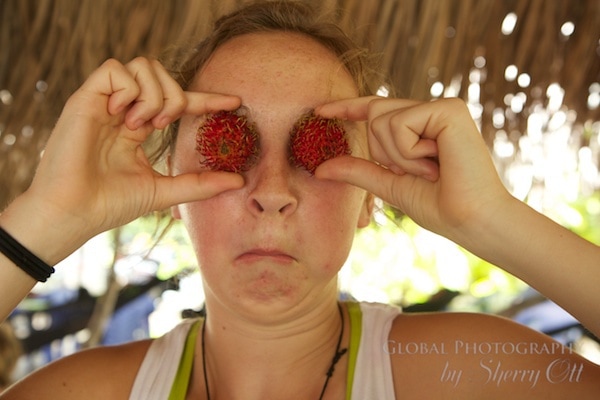 The best way to communicate with others in foreign countries is to smile â and she did plenty of that. Iâm pretty sure that out of all of the people Iâve traveled with in 7 years, she made me laugh the most. And she quickly won the hearts of the local people around her. She also made an effort to learn a few words and numbers in Vietnamese which is always a great thing to make the most of your interactions. 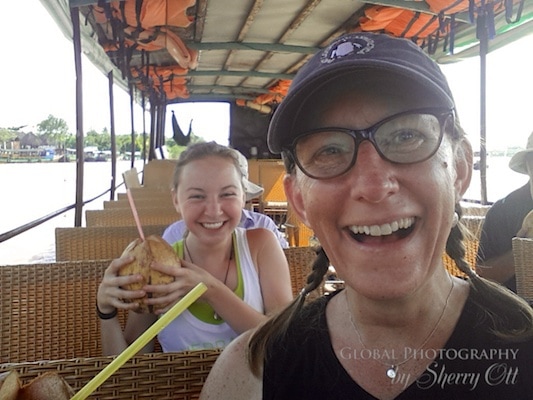 Evie actually wrote a story about her first experience traveling outside of the US for the Intrpeid Travel website. I am a seriously proud, proud aunt! Hereâs a little excerpt.

âHow the heck am I supposed to choose from any country in the world?â This was the question that Evie Ott asked herself for years, from the moment Evieâs aunt told her that she would take her anywhere for a week. Evieâs aunt happens to be Sherry Ott, travel blogger extraordinaire and brains behind The Niece Project, so when Sherry said âanywhereâ, Evie knew she really meant itâ¦

âThinking about all the options was just about enough to give me a headache. Finally I decided on three points of criteria for picking my destination. I wanted to experience culture shock, great food and non-touristy. Though it didnât quite make my decision evident, it surely helped in the process. I ended up picking Vietnam as my first International destination, and it was the best decision I could have made.
The first point that got checked off my list was the culture shock. I didnât even have to step outside the airport before I could realize I wasnât in Kansas anymore â or in my case, Nebraska. I was standing in an airport with minimal security and no air conditioning.
After leaving the airport and stepping out onto the streets, it was a whole other world. Reckless motorbikes sped by us, swerving in and out of lanes down the street. It seemed to me someone always had somewhere to be. Along the sidewalks, street vendors and their plastic tables and chairs hugged the curb. There are restaurants at home with outdoor seating, but there are almost always in fenced off areas far from the streets. In Vietnam, if you scooted out too far, you could fall right into traffic!”

We traveled on the Vietnam Family Holiday with Intrepid Travel throughout Vietnam.

What other advice to you have for first time international travelers?

18 Responses to "How to be a Good First Time Traveler"