For an Immersive Local Experience Try a Rome Food Tour 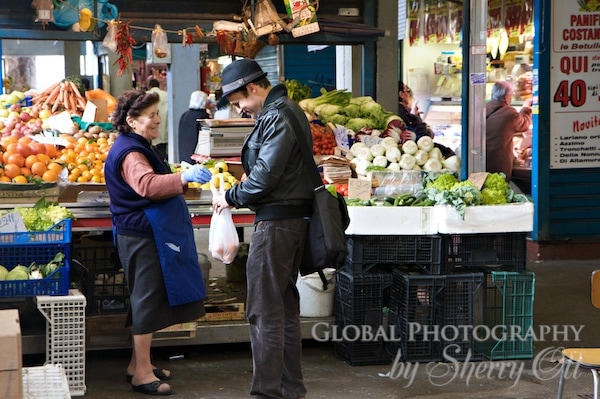 Locals bustle around the market picking out fresh vegetables and carry on in conversations in Italian with the shop stall owners; the ease in the conversations lets you know that theyâve known each other a lifetime. A breeze blows through the open air market leaving the scent of fresh flowers in the air of the covered market. Slightly round, old, Italian women dressed in plain frocks putter around rolling their bags and carts stuffed full of vegetables. You hear the loud laughter of the butcher as he slaps his side in joy reacting to a patronâs story. If Rome were human, the neighborhood of Testaccio would be itâs heart; or maybe more correctly, its stomach.

In more than 4 trips to Rome I had never heard of the neighborhood of Testaccio, until I came across a tour called Eating Italy Food Tours in Rome. Bethany had originally chose to come to Italy as part of my Niece Project in order to eat pasta; yes, that was her sole purpose, and I felt like it was as good as reason as any to travel to Italy. I scoured the internet looking for the right kind of food experience for her. Thatâs what landed us in Testaccio early this morning about to embark on a 4 hour food extravaganza.

Getting local with a Rome Food Tour

A small group of people gathered at Piazza Testaccio and our guide, Kenny, handed out maps, and prepped us on what we would see, taste, and do today.  In addition to eating a variety of Italian food, weâd be seeing some of the more famous sites and oddities of the Testaccio neighborhood. The day would be a nice combination of walking and eating.

We started at the covered market which we sadly learned were in itâs last days. This market, which began in 1914, was the largest in Rome at one point. We learned it would be moving soon to a new, shiny location down the street. Progress sometimes is bittersweet. Kenny took us around the market describing what was in season, introducing us to the stall owners, and the explaining the difference between cheese and Mozzarella di Bufala; trust me, you donât want to refer to mozzarella di bufala as cheese in Italy â they may deport you immediately. 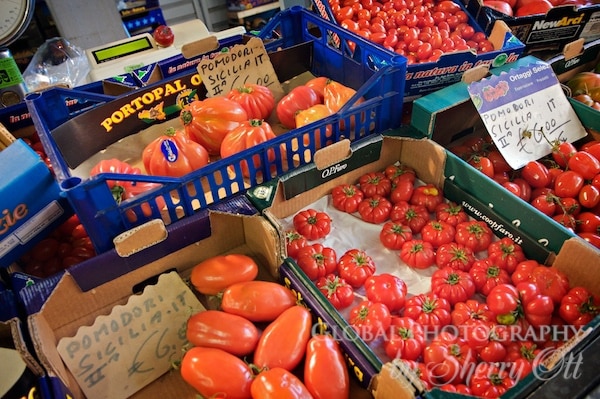 An abundance of tomato varieties from the Tomato Poet

When he pointed out the man referred to as the âTomato Poetâ named Carmelo, and I was immediately enraptured. This man knew everything there was to know about tomatoes. And I love tomatoes.  Kenny had us try 4 different varieties to experience the different flavors as if we were tasting wine.  Carmelo carried 45 varieties of tomatoes at his stand. He was referred to as the poet because when you went to visit Carmelo, you didnât pick out tomatoes, HE picked out the tomatoes. Youâd tell him what you were cooking that evening and he would walk around picking out the best and appropriate  tomato variety to use. I love this idea of letting the âexpertâ choose; itâs probably only a matter of time before Whole Foods gets their own tomato poet on staff. Once again, progress can be bittersweet. 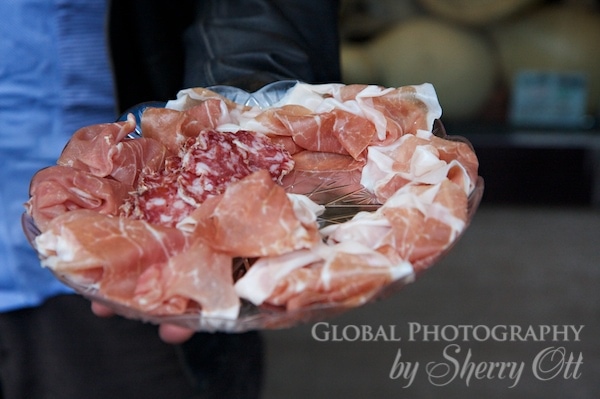 A platter of Italian meat – I could eat this morning, noon, and night.

We moved on to Volpetti, an old specialty food shop; the oldest gourmet food market around. Salami hung from the ceiling and cheese was stacked in the windows. We stood outside as Kenny brought us a platter of fresh meats and cheeses. This is where Bethany started her love of prosciutto; something I think she had probably turned her nose up to before, but now here at Volpetti, cured Italian meat takes on a different taste.

We stopped in next door at Barberini a pastry shop established in 1945. This is where we learned more about the art and importance of eating standing up. This typical Italian bar/bakery was filled with locals standing having their espresso and cornets. Eating quickly in Italy meant that you stand, converse with those around you and donât waste time. In true Italian form, we had our little tiramisu treats and kept going. 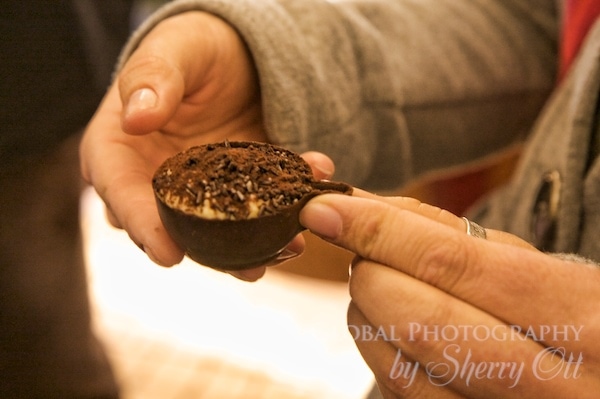 Tiramisu in a chocolate edible cup!

It was time to digest this food and that meant a break from eating and instead a stroll around the famous Testaccio non-Catholic cemetery. This was a wonderful break in eating and a great lesson in history. Kenny entertained us with stories and I entertained myself taking photos of this picturesque cemetery. This is where I found my favorite sculpture in all of Rome, and maybe the entire world.

Back to eating and it was time to get to the serious stuff, pasta. Kenny took us to Flavio restaurant inside of Mount Testaccio â the most unusual âmountainâ Iâve ever laid eyes on. Here we were introduced to an abundance of wine and all you can eat pasta specialties of Rome. We tried Carbonara (pancetta, pecorino, egg, spaghetti, and pepper), Caccio and Pepe (pecorino cheese and pepper), and Amatriciana (a tomato based sauce with smoked pancetta ). As we ate Kenny told us entertaining and informative stories about the restaurant and schooled us on our knowledge of pasta. Did you know that there are over 600 kinds of pasts in Italy? Itâs sort of like the varieties of rice in Asia I thought to myself. 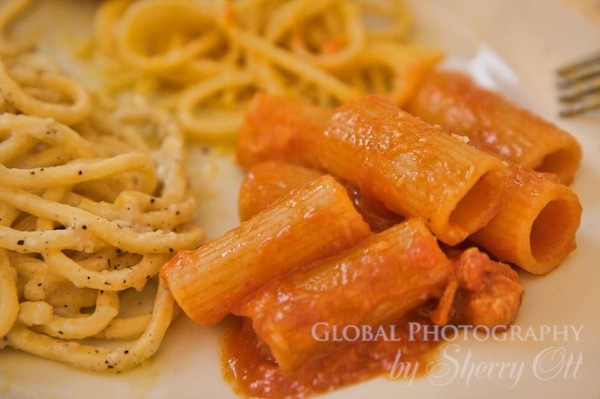 We moved on to yet another food stop at 00100 Pizza, a fusion of Italian snack food. We sat outside in the warm sun and tasted the suppliâ alla Genovese ; I had wished that I hadnât gone overboard on the perfectly cooked al dente pasta at Flavio. I was  full at this point! I looked over at Bethany and thought that maybe she had reached a food coma herself, until Kenny mentioned the magic word, gelato, and everyone perked up. 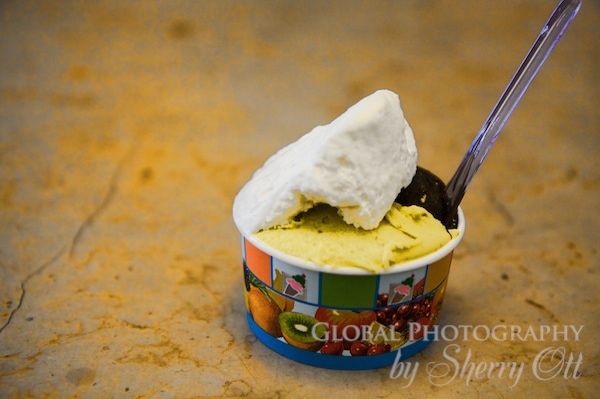 He continued to tell us neighborhood stories of mafia and food until we reached Giolitti gelateria. This is where Kenny ruined my gelato experiences in Italy for the rest of my days. He told us the secret to how to know if the gelateria serves real homemade gelato or if the gelato is made from a powdered mix. There were 3 things to look for and I refuse to share them with you since it will disappoint every other gelato experience you have as you walk around Rome; it was sort of like learning that Santa Clause isnât real. Suffice it to say, Giolitti serves the real stuff and I know â because now I have the secret power to tell real from powdered. And the real stuff is delicious beyond words. I had the freshly made just-brought-out-from-the-back-kitchen dark chocolate and pistachio flavors. And donât worry if you choose two flavors that arenât complimentary, they will tell you and not let you order it!

Four hours later, our Italian food desires were fully satiated. In addition, we had become extremely knowledgeable about this local neighborhood tucked away from the Rome tourism madness. Bethany and I had learned a great deal from Kenny and the tour, but most of all we learned where we wanted to come back and have dinner! 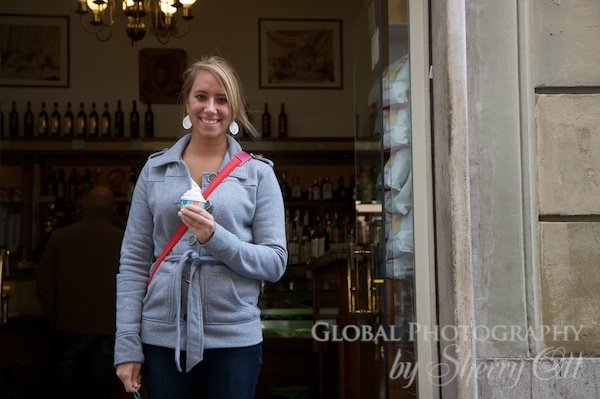 Bethany and her gelato – a great finishing touch!

â¢ The tour was a good mix of eating and learning. We did eat a lot, but in between we walked a fair amount and learned about non-food things in the neighborhood, as well as the food culture in Rome.
â¢ The portion sizes were generous.
â¢ Provided with a map and names of all of the places we went to and learned about for future reference.
â¢ Kenny was a great guide, clearly passionate about his neighborhood and had what appeared to be good relationships with all of the owners of the places we went to. This aspect made it feel even more personable.
â¢ I loved the sit down âpasta tasting/lunchâ at Flavio â it was great to get off our feet for a bit.
â¢ Plenty of place for bathroom breaks – which is important when you are eating and drinking for 4 hours!

The Could be Better:

â¢ I donât really have anything to improve. I enjoyed the 4 hours, but I suppose for some it could be long.
â¢ Itâs a little pricey, but you do get a full meal and entertained for an afternoon. In Rome, you wonât find things for much less!

Would I recommend It:

If you are traveling in Rome and are wishing to get away from the crowds, this is a great rome tour to do just that! In addition, you really learn about the food industry and history in this region of Italy and the neighborhood of Testaccio. Youâll get introduced to some great local restaurants and have a true local experience away from the historical center. Plus, youâll learn enough to easily come back on your own and try more of the places Kenny recommends!

Disclosure: Eating Italy hosted my Testaccio Food Tour. However, all of the opinions expressed here are my own â as you know how I love to speak my mind!