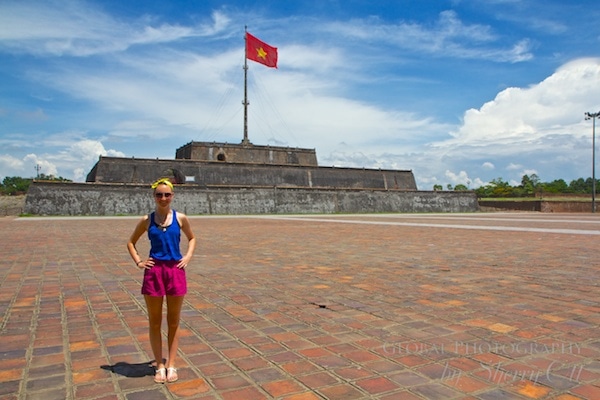 Evie in front of the Citadel in Hue Vietnam

I mouthed the words, âItâll be ok.â through the front window of the car as we pulled away. After all, I was taking away my sister-in-lawâs oldest daughter to a place halfway around the world, a place she knew very little about, a place that was completely foreign â this was a big step. Yet Michele confidently let us go and waved goodbye from the garage, however I absolutely realized that she was not confident inside.

I had a piece of paper packed with me that described the temporary guardianship that I was assuming â it was titled Temporary Care and Control of a Minor Child â and it was signed and notarized. The only thing that was off limits was marrying her off or putting her up for adoption â everything else I had responsibility for. It was a responsibility that I always sort of knew I had â but when put in writing it for some reason took on more meaning to me.

Earlier that morning Michele came to me as we were getting the final things ready to leave for the airport and said to me, âYou know not to let her go places alone â right?â Inside I was a bit surprised by this â mainly because I had never really considered this scenario before â not because it wasnât important, or I was being reckless â it just wasnât something that was on my radar as the millions of other things I was nervous about regarding this trip. Even though Michele appeared calm about it all â as the time got closer for us to leave Iâd get these little sentences that would come out and would startle me.

I started to wonder if the splitting headache I had for the past 2 days was maybe caused from stress. Iâm not at all used to traveling with responsibility. Yet I knew I had a big responsibility when taking my niece out of the country for the first time. Michele had mentioned to me the night before, âI would not let anyone else do this but you.â I smiled and accepted the compliment â but also knew that there was a tinge of worry and concern wrapped up in that compliment. 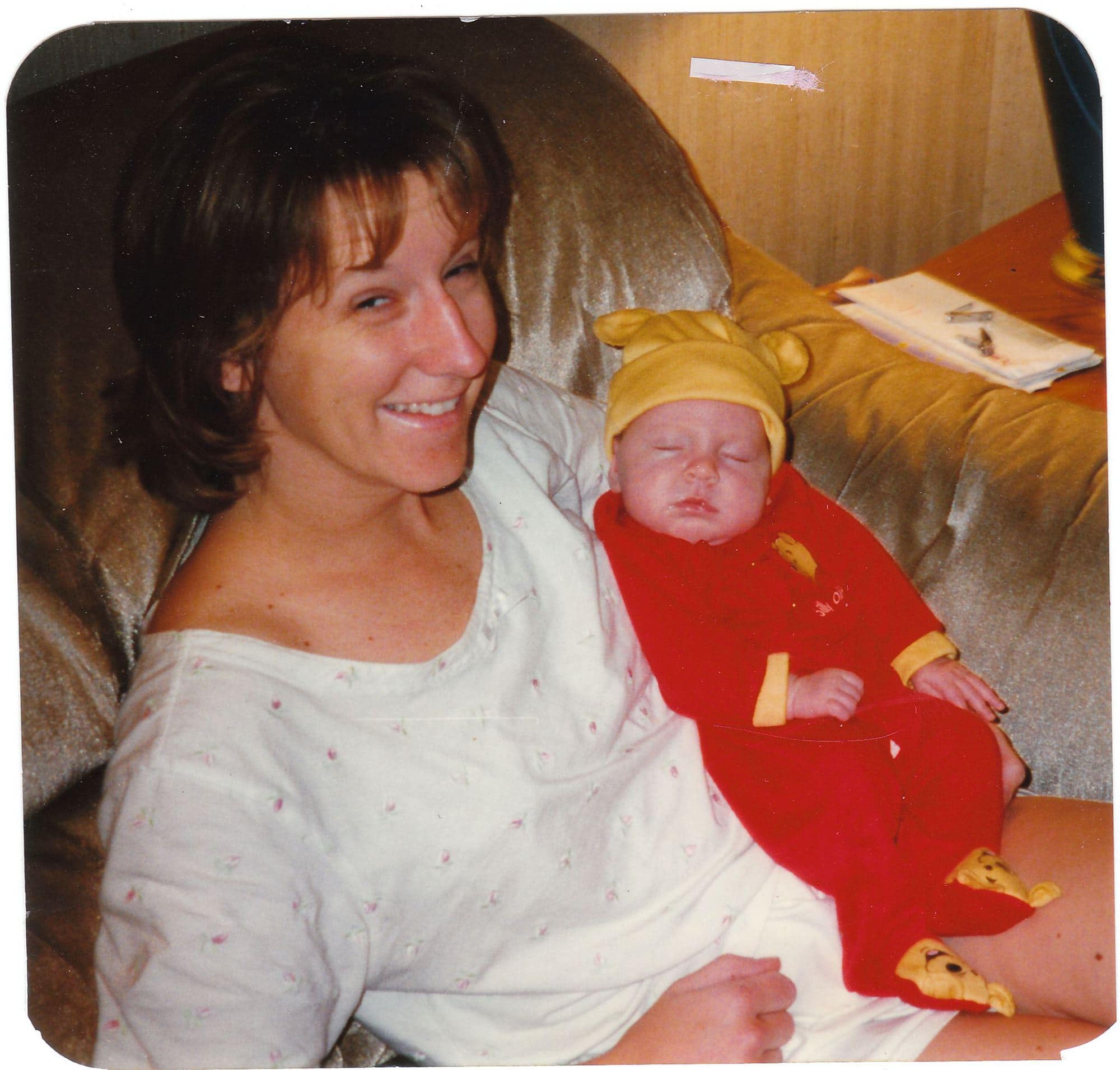 Michele posted this great update on her FB timeline the day we left: ” Evie’s Vietnam trip: This day in your life when Aunt Sherry met you for the first time, August 7, 1996. I think I actually caught it on camera. She was whispering in your ear that you should travel the world. Do big things in your life! I didn’t really think you were listening. You are now in Singapore after 23 hours in a plane waiting for your final flight to Hanoi Vietnam. Stay strong! You will have the greatest adventure of your life. Love from Mom”Â  I was 26 when this was taken – and I didn’t even have a passport at that point!

I remember when I took my oldest niece Bethany on her Niece Project trip to Italy â my brother-in-law, Frank, also showed concern. Sometimes I think that this project of mine is not only a (hopefully) meaningful life experience for my nieces, but itâs also a huge test for me, to show my family that I can be responsible. Sad that I had to type that sentence at age 43 â but itâs a reality when you are the âcrazyâ one in the family who gave up everything responsible and adult-like up to travel. However I do completely understand their concern. Iâm taking their kids into an unknown environment, exposing them to new things and potentially new dangers. They are being forced to let go â and thatâs the beauty of travel to me â you have to let go to really make it work. So in a way the Niece Project is a journey for all of us whether you are on the plane with me or not.

On the flipside of this, Evie appeared completely calm and excited. She didnât even seem to flinch as we said goodbye to her dad and sisters at the airport and they drove off. At 17, I know I wouldnât have been that calm about leaving my family. I was pretty clingy which seems strange to me now since I turned out quite different than the needy mamaâs girl that everyone assumed I would be. Yet, looking back on this scenario I think she had her own stress she was hiding in her own way. 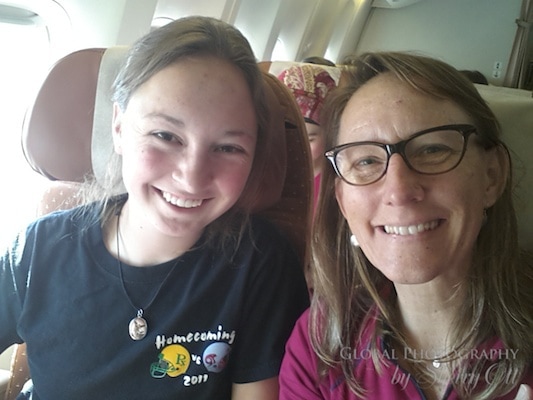 Taking off on our first leg of the long flight!

We had a long flight â with a stop in Moscow. We started off great â Singapore Airlines economy isnât too shabby. I settled into watching the complete first season of Game of Thrones â it seemed like a good way to kill 10 hours, and Evie slept. However a few hours before the first leg to Moscow was complete, she woke up and said the words that put me on high alert â âI donât feel very well.â 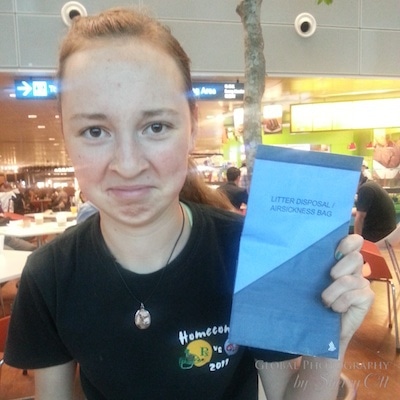 Evie’s best friend on the flight…

I knew that she was always prone to motion sickness â but it had been a pretty smooth flight thus far, so I wasnât really sure what was going on.

But the next few hours were rough as well as the transit in Moscow a hot, sticky, crowded airport that is not a place where you want to be sick â especially when you had to get back on a plane for another 11 hours. Iâm pretty sure that Russia emotionally scarred her for life now â sheâll always have a horrible hatred of the place even though it was simply innocently in the wrong place at the wrong time in her bout of sickness. Iâm sad that any country is disliked â but at least it wasnât Vietnam that she was going to associate with a bad memory.

Thanks to pure exhaustion and a dose of Dramamine, she slept the rest of the way, but didnât eat a thing until we got to Singapore where I made her regroup a bit and get some food. I of course was worried about the fact that this is her first international flight â we are 16 hrs into it and now she has no food in her body and is dehydrated. Lord â I could never be a mom. I have enough worry in my life â being responsible for others just amps that up a level. I shook it off, got into my responsible guardian mode and got her some food in Singapore. We laughed about the whole situation â which is the amazingly wonderful thing about Evie â she has a super personality. But I was also pretty worried as I so badly wanted her to have fun on this trip, and it wasnât off to a good start. Then again Iâm not sure how anyone can have when doing 36 hours of flying around the globe – unless of course you have the full seasons of Game of Thrones.

Upon arriving in Hanoi we were both tired, but the excitement of arriving took over. As I looked out the window at the famous Vietnam chaotic traffic â I was reminded of just how challenging it can be to be a pedestrian in this country and wondered how I would ensure Evie was ok. We immediately went out walking around the Old Quarter in order to beat jetlag and simply look around a bit. Thatâs when my high alert antenna went up again â and Micheleâs concerns and words entered back into my head. I was like a nervous mother telling her to watch this, wait, donât go there, be careful, hold on to your purse, holding her elbow as we crossed the street barking out instructions on how to watch for the motorbikes â I honestly didnât know what possessed me â responsibility I suppose â the damn âRâ word.

But like any kind of travel, when you first arrive to a country you tend to be on high alert â getting use to itâs rhythm, culture, and rules. And then as a few days go by you breathe a sigh of relief and start to lighten up, enjoy, and wonder why you were ever so worried. That first day we even met some college students as we walked around the lake who took a big interest in talking to Evie about what life was like in the US. 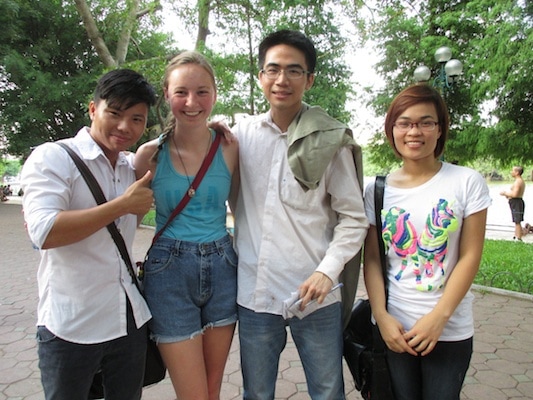 It took about two days until I took that big sigh and just became one with Vietnam again. I let her go off and do things herself (yes Michele, Iâm sorry) â cross the street, go out and get water for us, and eat street food. Then things started humming on this trip. We had both gotten out of the initial jet lag fog and culture shock and had settled into our new environment.

As we lightened up we bravely ate anything put in front of us, wandered around the streets, gasped in shock at some things, and laughed more than two people with our age difference should â and most importantly, I started to love my new responsibility.

Thinking of doing some family travel yourself?
Check out Intrepidâs worldwide family travel campaignÂ  –Â  you can get 10% off their family trips for departures up to 31 January 2014 . Â Offer ends Sep. 30th, 2013. Â Just click on the image below to learn more!

Disclosure:Â  While in Vietnam I was a guest of Intrepid Travel.Â  However all of the opinions and thoughts expressed here are my own.Â  I never accept such a deal if I am required, in any way, to write positively about any company, organization or experience. I will only take such a trip if I am free to write honestly and openly based on the actual experiences that I have.