Hunting for Photos in Hoi An 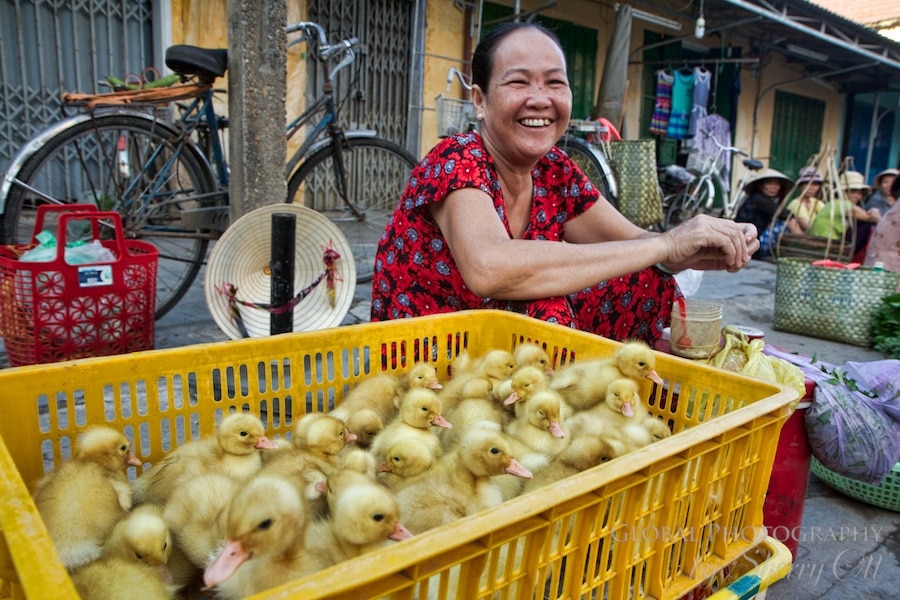 Hoi An Market – a women selling fuzzy ducklings. And no – I have no idea why.

âMay I take your picture?â I asked while I also mimed the action with my camera around my neck so that I could make sure I was understood.

The baby duckling vendor who a few moments ago was smiling and laughing with her friends looked at me and said with a stone face âYes – for $1.â

My initial elation quickly faded, my expression on my face no longer a smile, I swallowed my rejection and solemnly responded âNo thank you.â as I began to walk away. In those few seconds I thought about how Hoi An had indeed changed in little ways since I was last here. Sure â it was still wall-to-wall tailors, shoe shops, and cheap souvenir stands, but this request for money was new.

I remember Hoi An being one of my favorite stops during my Vietnam travel in 2007 â it was untouched by the destruction of war and they had just started to build high end resorts and restaurants to lure more tourists in. At that time I loved to shop for things â after all I still sort of had a âhomeâ to put things in. However no longer do I shop as I donât have anywhere to put such things, but I was willing to help Evie discover the joy of shopping in Hoi An. I played the role of responsible adult (bad cop) as she tried on dresses (good cop) and dealt with aggressive tailors and negotiations.

But I was really excited to get back to Hoi An for photography. I had one of my best photo experiences in this little town early in the morning. I accidentally stumbled across the morning fish market with activity which resembled the NYSE trading floor – but smellier.Â  I loved those photos and was anxious to take some present day images too with a better camera and hopefully more skill. After all â I seldom get the chance to photograph an area twice. However my guide regretfully informed me that the fish market that used to take part in the heart of the Hoi An market early in the morning was no longer â it had moved to another location â in what I can only assume was to get away from the prodding, camera-wielding tourists like myself.

Regardless of the lack of fish market, I still decided I wanted to see if I could find the real town here in old quarter Hoi An yet â or had is all been swallowed up by progress. I got up on one of our free mornings with the sunrise to go photograph the streets and specifically the market. I tried to convince Evie to come too but when the early morning came she succumbed to the comfortable bed. 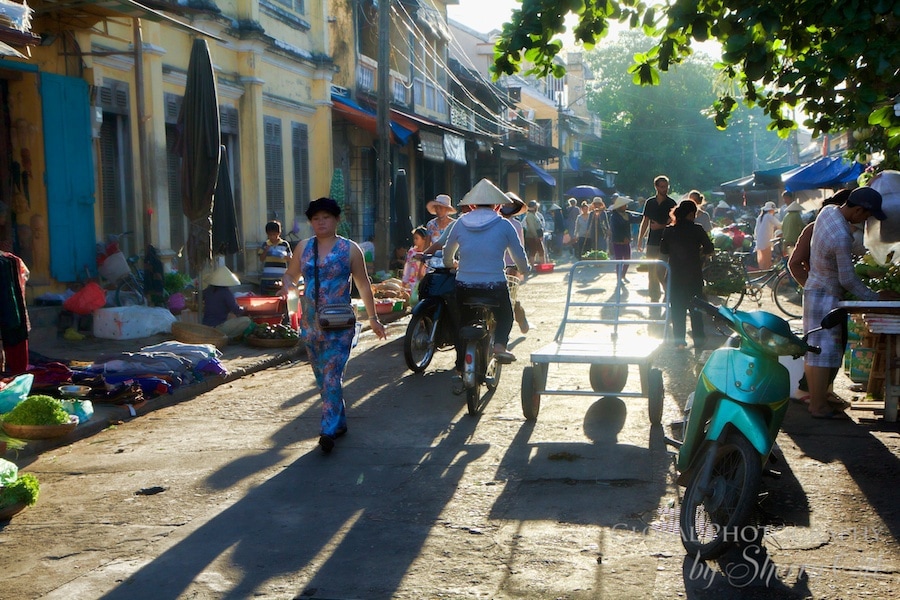 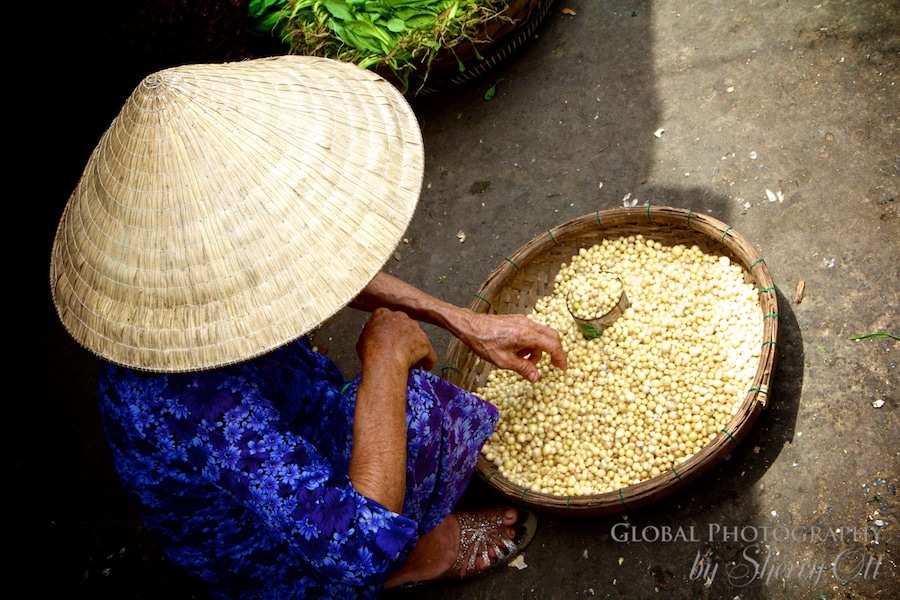 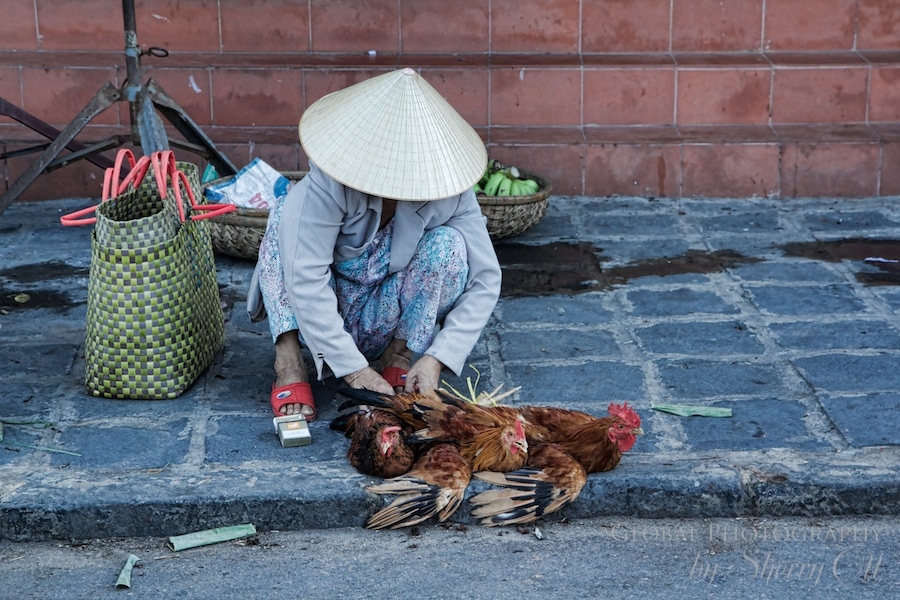 Fresh chicken – you must de-feather yourself!

As I walked over the bridge and turned left towards the market, it was a whole different feel than the later hours when the tourists woke up. The small market seemed to outgrow itself in the last 5 years â as vendors spilled out onto the streets setting up their sheet full of goods on the ground. The streets and curbs were lined with vendors, motorbikes and bicycles, the air smelled of fresh dirt and the noise of horns created a constant pitch in the background. Women were laughing and talking on the curbs while holding big wads of dong from their market sales occurring earlier in the morning. The market starts around 4 or 5AM for the locals and even though I didnât get there until 6AM it was still pretty hopping. I asked many women to take their photo but they said yes for $1 â this was a new tactic they didnât use 5 years ago. I was a bit dejected â but I totally understand that they are trying to make some extra money. Some, like the initial duckling vendor I mentioned let me shoot anyway once they realized I wasnât going to pay it. I normally have a policy of not paying for photos â but it seems as more and more people wander the world this gets more and more difficult.

I walked slowly through all areas of the market, snapping photos, but also just observing. The longer I stood and observed, the better connections I made with people. In markets I’ve learned that it pays off to be patient.Â  Many offered me samples, or simply gave me a welcoming smile once I saw that I was interested in more than a photo. I bought bags of fruit to take back to Evie since many of these fruits were things unique to Vietnam and SE Asia. 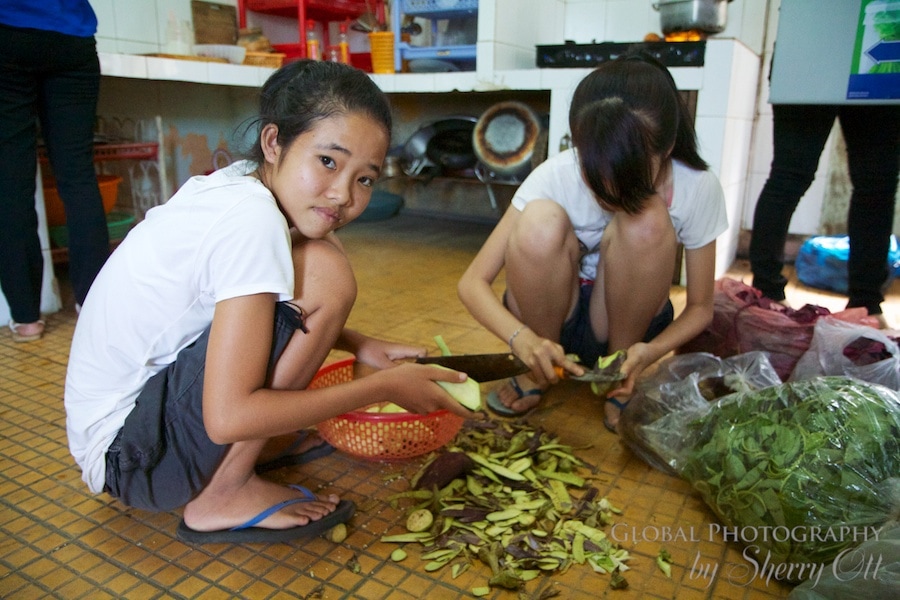 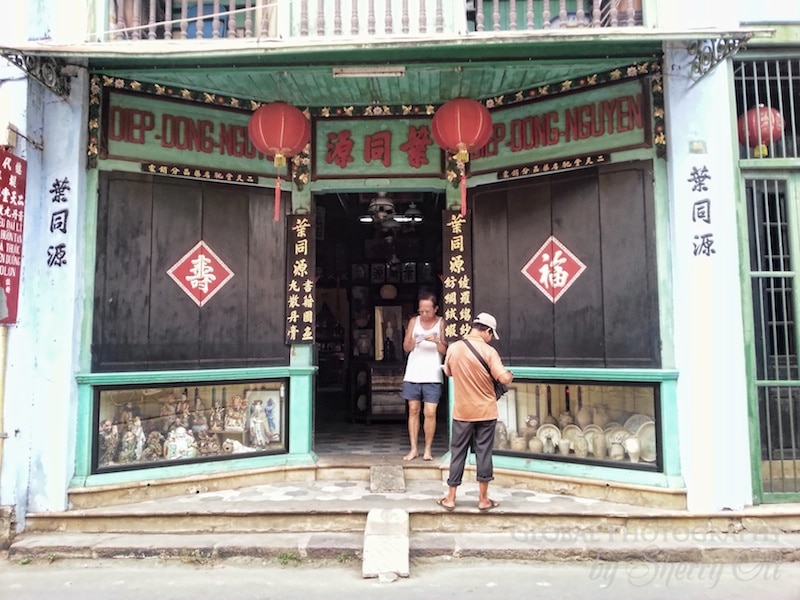 A man buys lottery tickets on the street 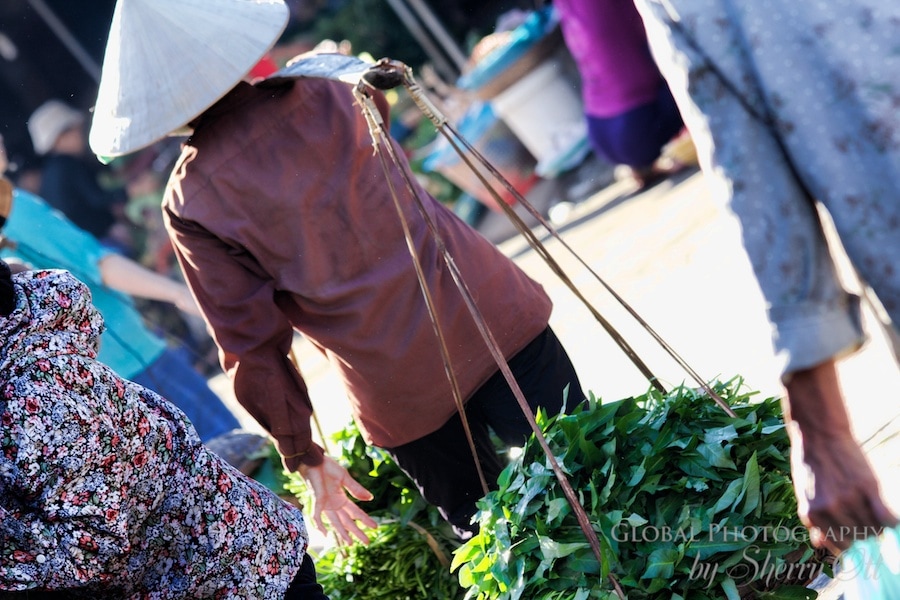 Fresh herbs are in abundance all year and used in every Vietnamese dish. 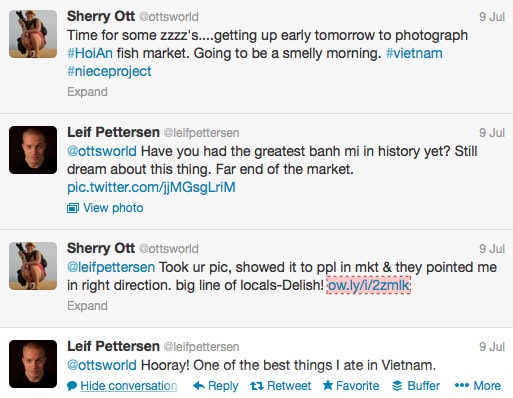 In addition to photographing the market, I also was on mission to find a local Banh Mi place. My friend, Leif, recommended in a tweet the night before when he heard I was heading to the marketing to do photography. He sent a picture of the stand so I pulled it up on my phone and showed the picture to the local vendors at the market and they eagerly started giving me directions. Their once stern faces softened and they were eager to help, drawing me maps, and practically walking me to the popular Banh Mi stand.

Eventually I found it â Banh Mi Phuong â it had a big line of local people surrounding it all straight off their bikes on the way to work â sort of like a Vietnamese version of Starbucks. I squeezed my way into the crowd and waited patiently to make eye contact with one of the 3 women rapidly making sandwiches â it was like getting a bartenders attention in a popular nightclub in NYC â not easy. However, since I was the only tourist, I did stand out. I asked for two as I thought Iâd bring it back to Evie with the fruit so she could try it too. The woman in the conical hat asked me âeverything?â â I hesitated for a second – not knowing what everything was â and then said yes with a smile. I watched as she loaded up the crispy bread roll with about 10 different ingredients of which I only knew a couple of them.

Two and a half hours after I left that morning I returned with not only a load of new photography and experiences to share with Evie â but also breakfast â a very local breakfast from the market. This just confirmed what I learned years ago in Hoi An â you have to get up early for the best photography and food in Vietnam.

Disclosure:Â  While in Vietnam I was a guest of Intrepid Travel.Â  However all of the opinions and thoughts expressed here are my own.Â  I never accept such a deal if I am required, in any way, to write positively about any company, organization or experience. I will only take such a trip if I am free to write honestly and openly based on the actual experiences that I have.

16 Responses to "Hunting for Photos in Hoi An"