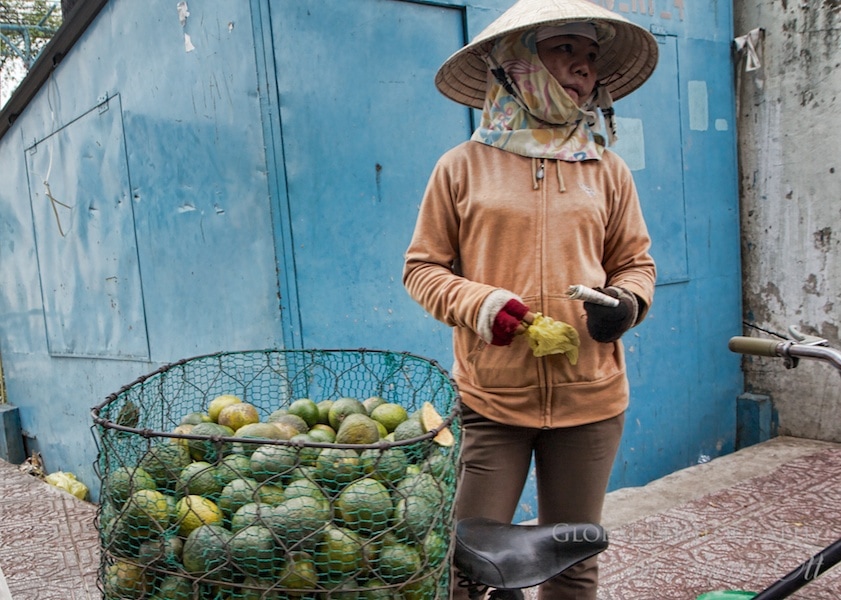 A woman sells green oranges at the local market

Many travelers talk about wanting have more local experiences â but how far will you go to get access to those experiences? One of the main things locals do in Saigon is ride motorbikes â so would you get on the back of one to ride around like the locals do?

Most people think that simply crossing the street in Ho Chi Minh City is a real life Frogger game – a death wish. Vietnam is known for their chaotic motorbike traffic and it can be quite intimidating to most tourists. Iâve heard many people say that they would never get on a motorbike in HCMC let alone drive themselves anywhere. However, my niece and I decided that we wanted to experience the local side of Saigon so much that we did the unthinkable – we became motorbike passengers with Saigon Unseen.

Granted I had lived there before and drove my own motorbike around the city for months, but for Evie to agree to hop on the back of a motorbike and see the real Saigon, was a pretty big step. I was thrilled that she was daring and accepting enough to do this when most visitors would shy away. I honestly have no idea where she gets her willingness to try new things from, but Iâm just happy she has it and I hope she keeps it up her whole life.

How to See the Local Side of Saigon

We were ready to see the lesser seen sights of Saigon â so when our guides, Mr Sau and Mr Minh, pulled up on their motorbikes with our helmets we were pretty excited. We would be riding with them for 4 hours through parts of the city seldom seen by visitors. This was a tour of extremes â one that took us to the poor and rich sections of Vietnam, and it also had us experience the extreme weather conditions too â hot and sunny to rainy season downpour. But we loved every minute of it. 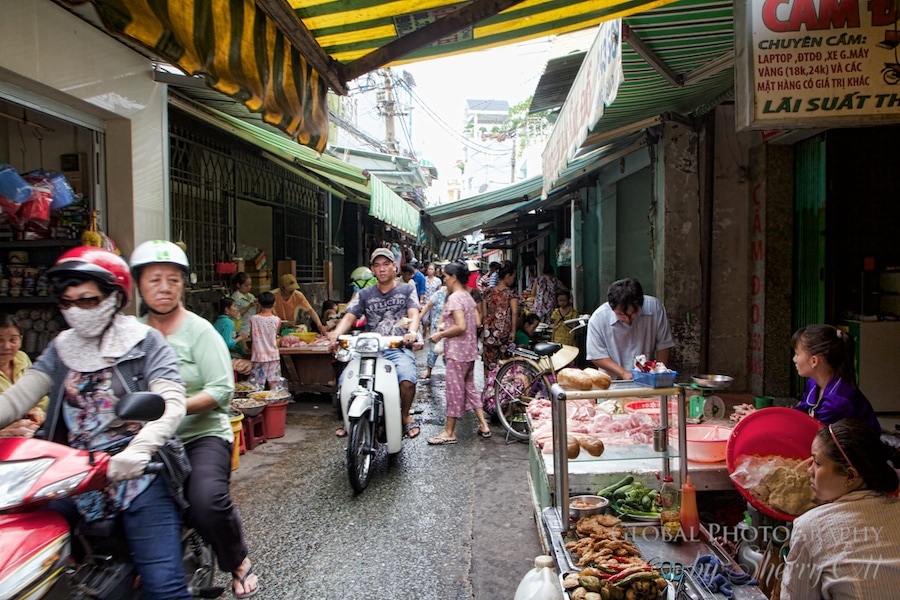 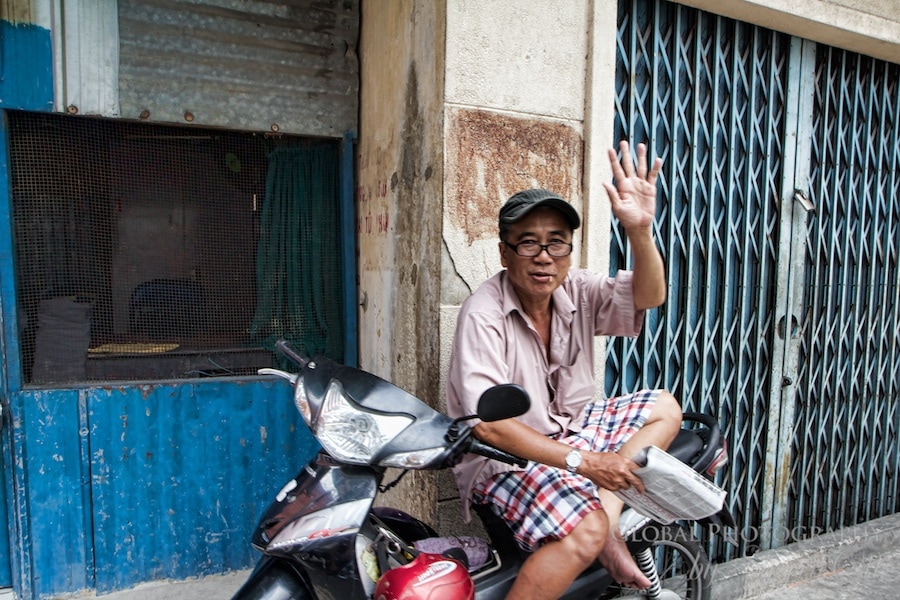 A friendly hello as we drove past! I loved that the guy sits on his motorbike to read his morning paper!

We drove out of District 1 and immediately got into the local markets. We rode through the markets until they became so narrow that we had to get off the motorbikes and walk. People were everywhere buying, selling, and socializing â and we were definitely the only tourists there as we had plenty of people stop and stare at us. But normally a smile in their direction was enough to wipe the shock off their face and smile back.

We walked while the bikes slowly followed along behind us. We saw skinned frogs, and skinned cow heads â now this is what I mean when I talk about REAL local experiences. You aren’t going to find these types of local goodies at the Ben Thanh Market for tourists. Â  If you want see local stuff â then you have to stomach this: 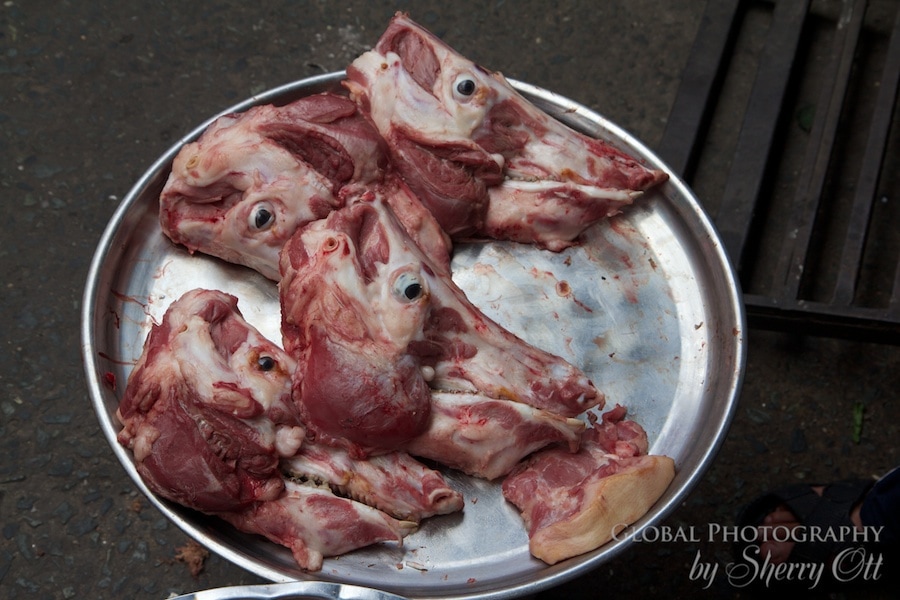 Cow heads at the market – all served up on a platter 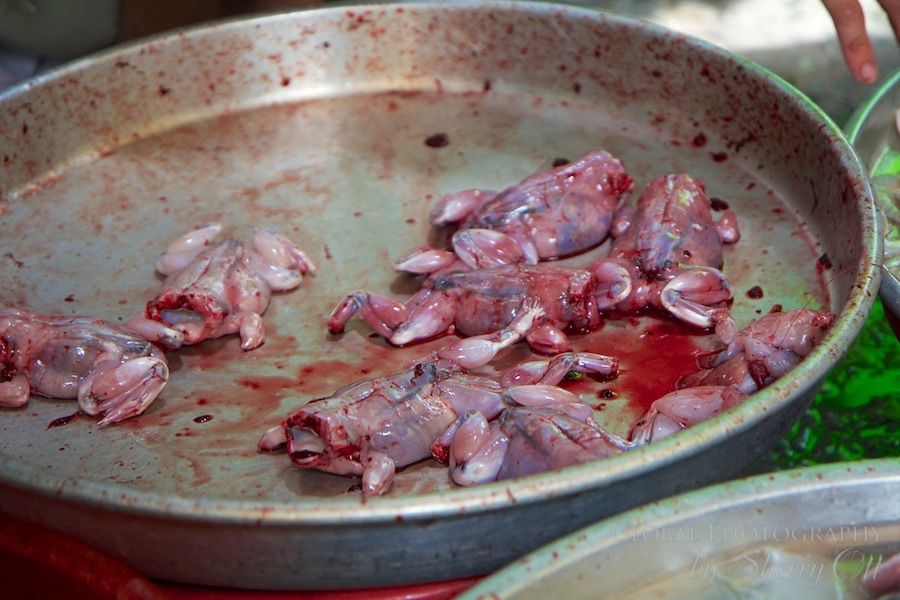 Frogs for sale…it took us a while to realize these were still alive.

A che vendor caught my eye and my stomach and quickly Mr. Sau bought us a little bag of che for later before I could even take out money. After another 20 minutes on the motorbikes we stopped for a coffee and a chance to stretch our legs. Mr. Sau took us to a little establishment where he bought us cafÃ© sua da and lime juice where we could enjoy our che that we bought from the market. There were only a few people at the little outdoor tables, but all of them were curious to see us and asked Mr. Sau who we were, our ages, and where we were from. 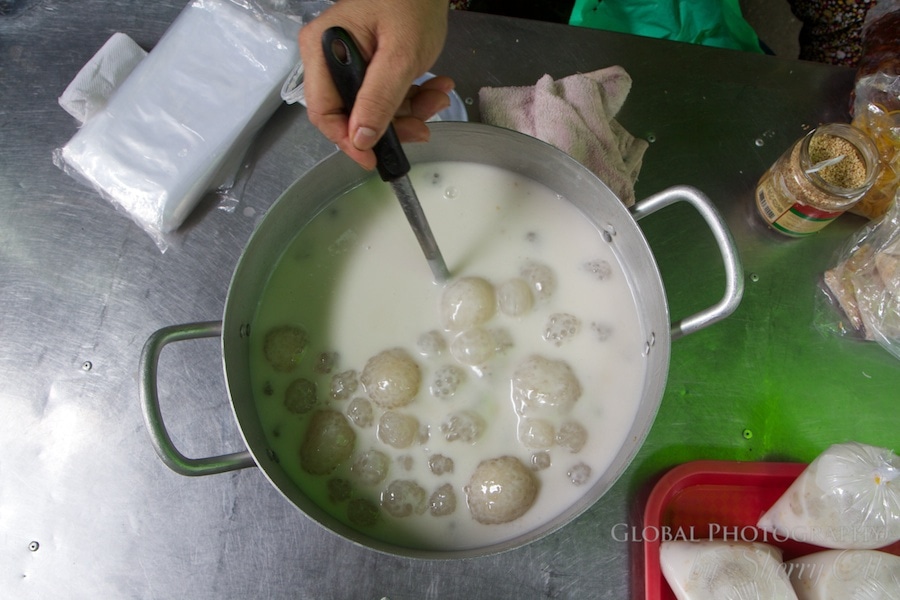 Delicious yummy che! A sweet ‘soup’ made from sticky rice balls and coconut milk – my favorite!

Mr. Sau then took us through the new tunnel connecting district 1 and 2 in Saigon which was a miracle to me considering it was just a pile of dirt and a dream when I lived there. The newly constructed tunnel changed the whole dynamic of traffic and would have certainly made my commute easier when I had lived there. I just loved being on the bike going through the tunnel under the river â a fun way to experience the new modern architecture in Saigon. 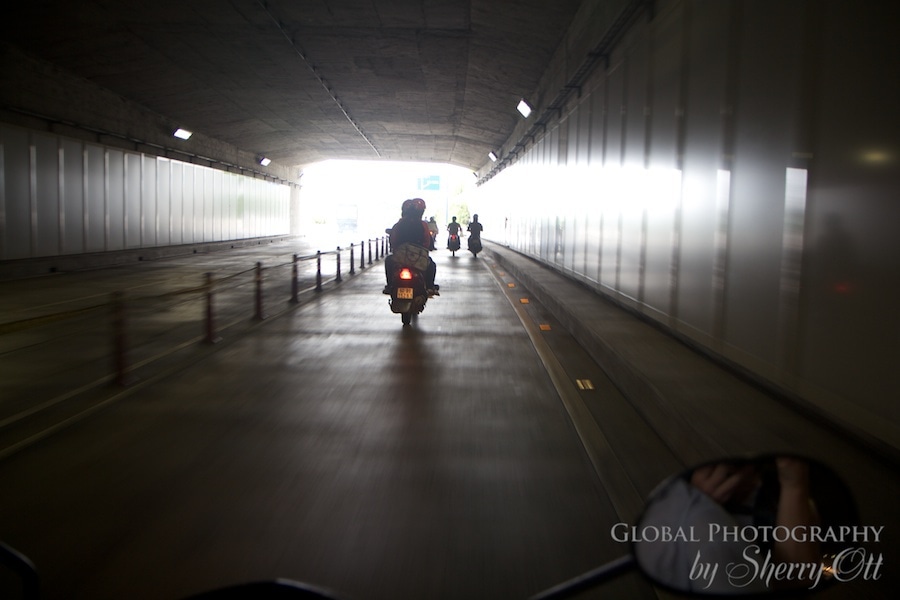 Mr. Sau was super at taking us places we were interested in. I had told him that Evie was interested in catholic churches and he took us to a unique place in District 4 that I had never heard of before – XÃ³m Chiáº¿u Church. The church had a number of statues that Evie recognized but the most interesting thing about this Spanish Style church in the middle of Saigon was the body of a 100 year old female Saint that is on display. A bit gory – but interesting. They also had a cemetery inside the church. Apparently they had dug up an old outdoor cemetery when the land was going to be used for something else and they gave everyone mini caskets to store the ashes in and stacked them behind glass cubes. I had never seen anything like it. 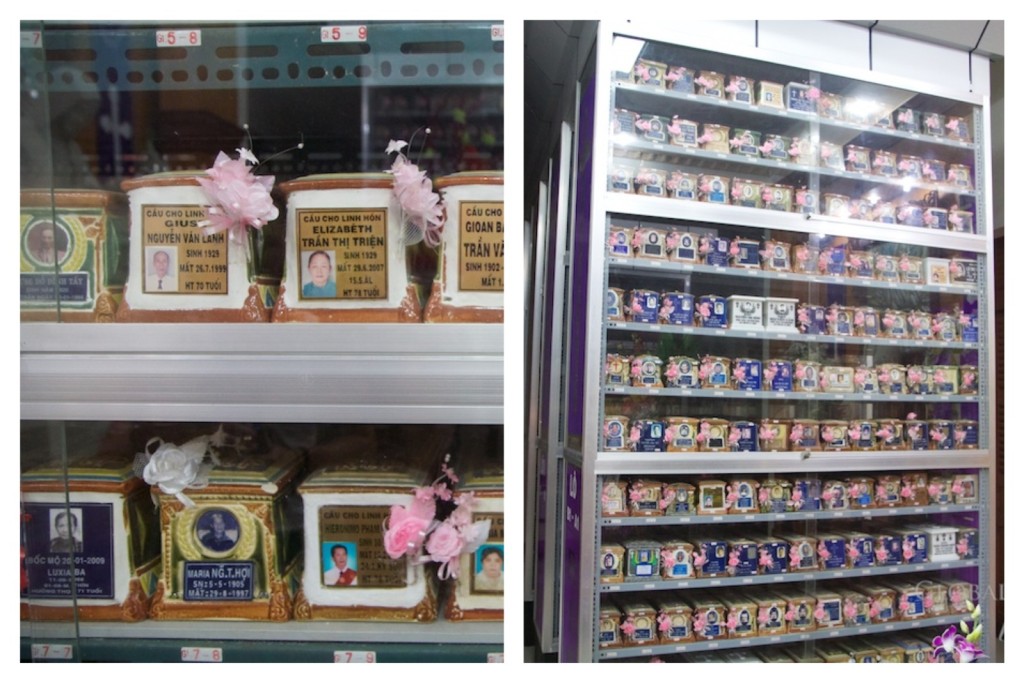 Mini graves inside the church.

Next we road out to the modern and non-Vietnam-like District 7,Â Phu My Hung, an area that I use to have to commute through when I was teaching at the factory. Wide streets, big sidewalks, brand name stores, and modern slick architecture were everywhere. The new development sort of turns my stomach â I know I should be happy for the Vietnamese for growing – but itâs also so sad to me at the same time. Thereâs nothing about District 7 that feels like Vietnam to me. Itâs sterile, and if the whole country turns into this â then Iâm sad to say that I wonât be coming back here. Yet â Vietnam is a long ways away from that. 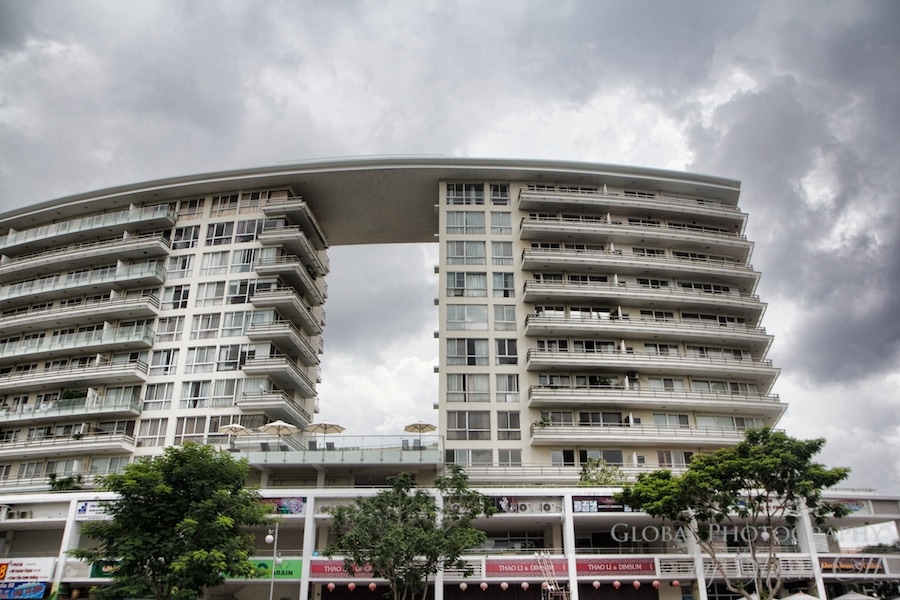 District 7Â  Phu My Hung – the modern Vietnam and the way of the future.

Mr. Sau remarked after we moved out of the new area and turned back into the typical Saigon streets â âWe are back in Vietnam nowâ. I felt relieved to be back in the grittiness. It was time for a lunch stop so Mr. Sau took us to one of his favorite Pho restaurants. Pho Hung makes their famous broth and then transports it all over the city to different restaurants. However we were at the heart of the pho broth making, eating at the restaurant itself. Mr. Sau nicely walked us through each step of the pho process of getting ready to eat soup â he didnât know that we had been odâing on it for 2 weeks now!

As we ate all of a sudden it sounded as if a freight train went by outside â I turned around and looked and the rain came down in sheets â it rained so hard it looked like it hurt. And it didnât stop. As we finished our soup we watched as the street outside flooded and we took photos and commented and laughed about the various people trying to make it through the quickly rising water. However â eventually WE had to go out in that stuff too. Mr. Sua got out the extra ponchos and said we could go whenever we wanted to. We put them on and prepared to get wet – really wet. This was going to give Evie a real Saigon experience that not many tourists ever get â riding on a motorbike in the rain. 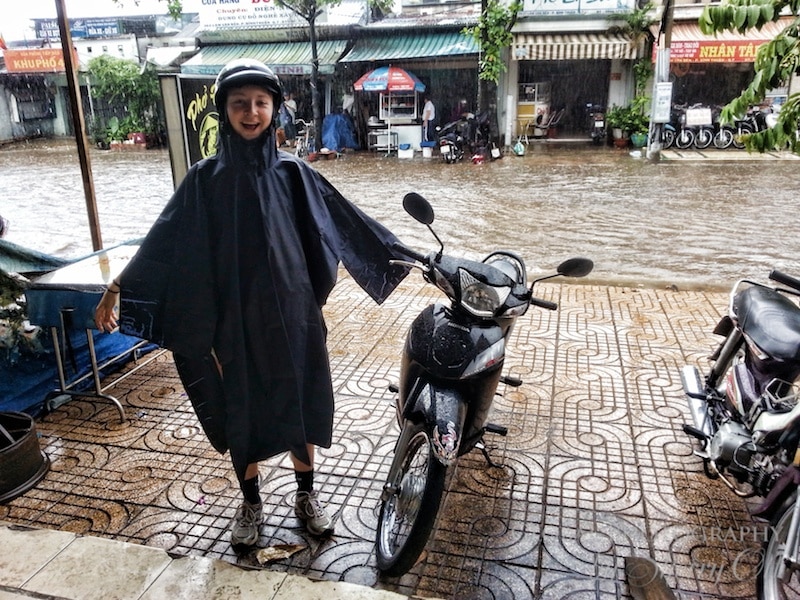 Evie ready to go out in the flooded streets with her poncho! 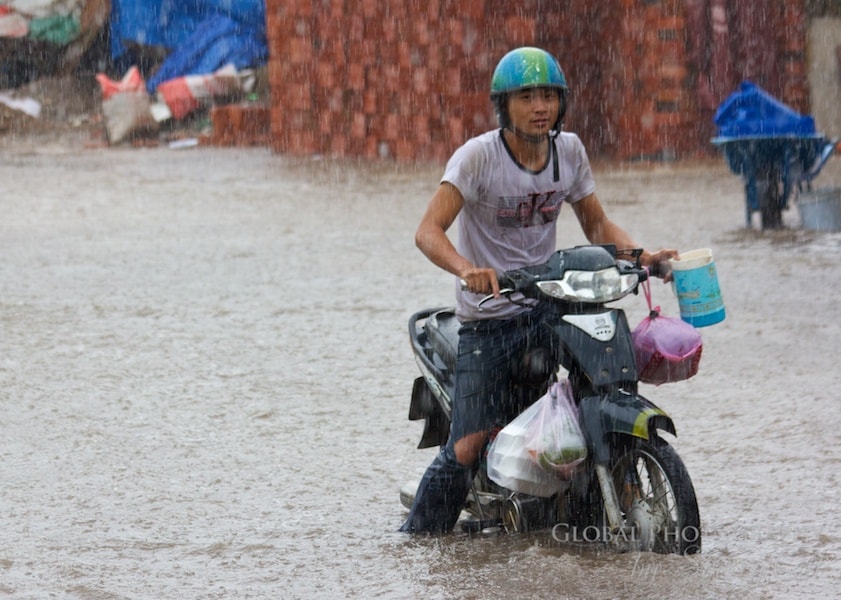 Stuck in the street flood – but still a smile on his face!

This was my favorite part honestly â driving around in the rain totally soaked but getting a real feel for what Saigon is like during the rainy season. We made a few more stops at temples and markets before they drove us back to our hotel. We were soaked through and through â but we were also wearing big grins â we had a great time seeing the Saigon most people never get to experience and a unique perspective of the city and culture. 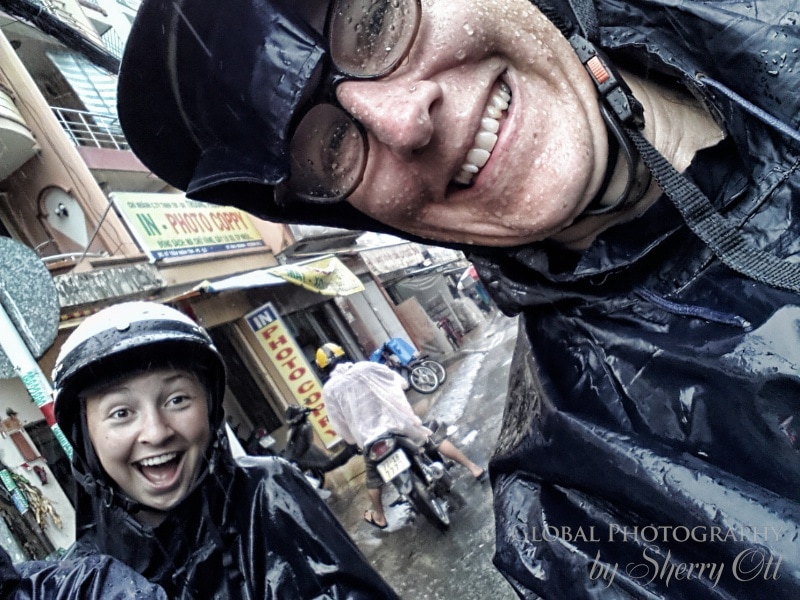 Evie and I on the back of our motorbikes enjoying the rainy experience!

More Information on Saigon Motorbike Tours:
Website – Saigon Unseen
Cost – $45 US
They offer 3 tours – Motor Bikes, Walking and also a photography tour (on motorbikes) with a professional photographer from Australia.