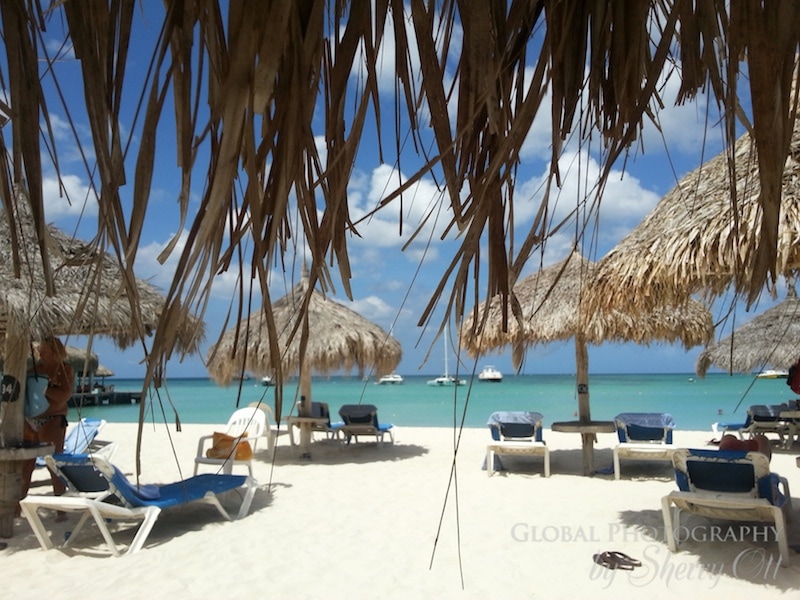 My view from my palapa.

Aruba is very proud of their water. Sure â they have some of the most beautiful turquoise water in the world â but thatâs not the water they are proud of â itâs their drinking water. From the moment I arrived the taxi driver gave me glowing reviews of the islandâs drinking water, and then I heard other people boasting about it around the beach, and the guest relations manager at the Radisson also regaled me with water facts. Aruba has 2nd largest saltwater desalination plant in the world â you can even take tours of it!

I thought that maybe their country motto should be âWeâve got great water.â instead of their âOne Happy Islandâ motto â or their latest â âBe Safeâ¦Be in Arubaâ. I personally think that last motto is a marketing disaster. Do you really want to remind people that they should be safe â or happy? Stick to happy Aruba. Regardless â I love it when locals are proud of their home â and even their drinking water. And my 3 days spent on Aruba were water filled and also pretty happy â so it lived up to itâs reputation!

Resort for Relaxing and Romancing

I stayed at the Radisson Resort on Palm Beach or otherwise known as the âHighrise Areaâ. The Radisson Resort was the first highrise on the beach years ago, but it only has 8 floors. It had everything you would expect of a resort setting â multiple restaurants, pools, beach, cheesey entertainment, and lots of services for families and couples. There was also the Plaza Club that was âcherry on topâ of their resort services â literally located on the 8th floor. If you were a Plaza Club member you had access to free breakfast every morning and a wonderful happy hour every night. The resort was paradise contained in a beautiful setting leaving you to really need nothing. 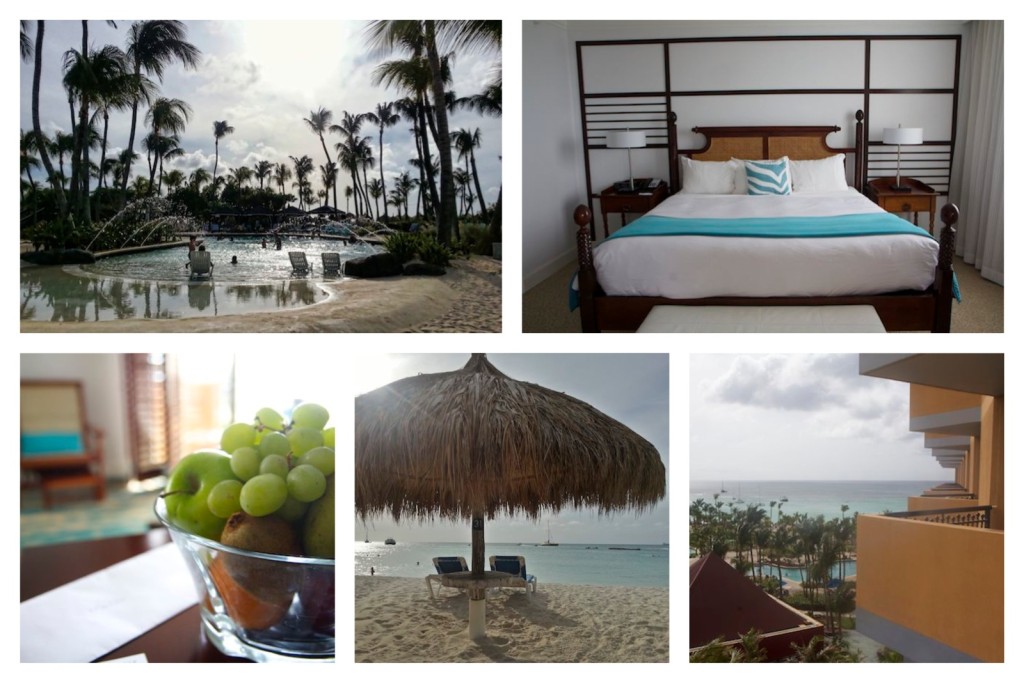 But when in Aruba, you want to be was outside. The Radisson beach was gorgeous with palapas (straw umbrellas) dotted among the white sand and a view of the turquoise paradise. And thatâs just what I did on day one â I sat under a palapa all day and read â just read. This was pretty unusual for me â it takes a lot for me to slow down and do nothing â but Palm Beach has that effect on you and the 3 weeks of solid travel on the Club Carlson project also probably had something to do with it!

48 Hours in Aruba Including One Beach Day

Since I spent my first day being a typical tourist lounging on the beach, I basically only had 48 hours in Aruba to go out and do other stuff on the island. After a day of relaxing surrounded by tourists from the East Coast, I felt pretty excited to get out and explore the rest of the island in search of a more cultural scene. 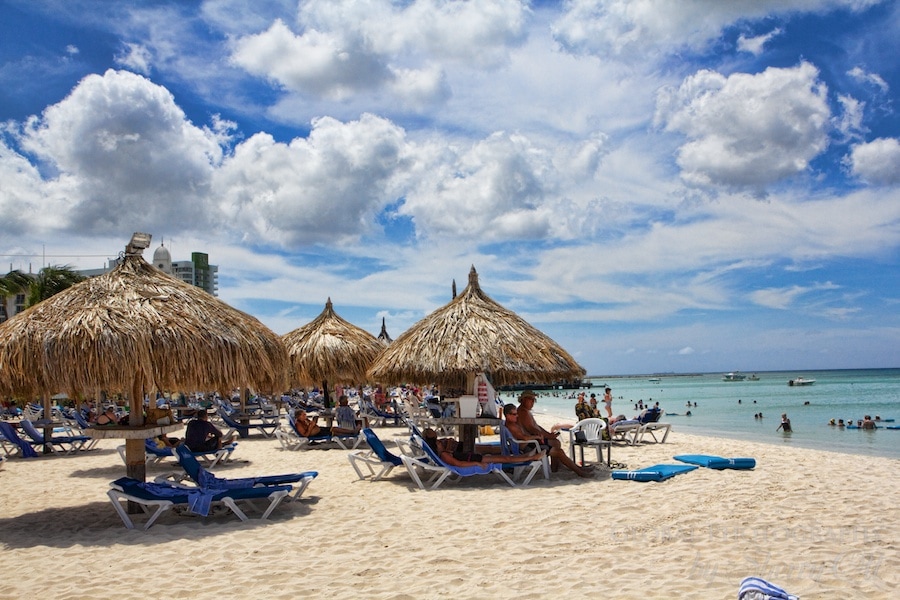 Aruba is my first island Iâve explored in the Caribbean. It surprised me in some ways since the main tourism comes from the US, you pay for everything in US dollars and everyone speaks English â in many ways I forgot I was in another country. Because of that itâs a really easy first time international destination for Americans â and I even sat next to a honeymooning couple on the plane who were getting their first passport stamps. I will also say that itâs a great island for families and couples, but I canât say that I would recommend it as a solo destination â I found it a challenging to break the couple/romance barrier and I never met another solo traveler in the 3 days I was there. I witnessed a wedding every day I was there so be prepared to be surrounded by romance.

Rent a Jeep and Explore Offroad

The island is like night and day. The western area is where most visitors spend time on the beaches, but if you venture outside of the tourism belt to the Northeast coast â youâll have a completely different experience. Dirt paths are spread out like a maze along the rocky, wild coast and you wonât see any palm trees, but you will see cactuses. On the advice of the Budget Rental Car guy, I took the dirt road from the Lighthouse to the Chapel and was completely isolated out on the rugged coast â and of course I loved it. 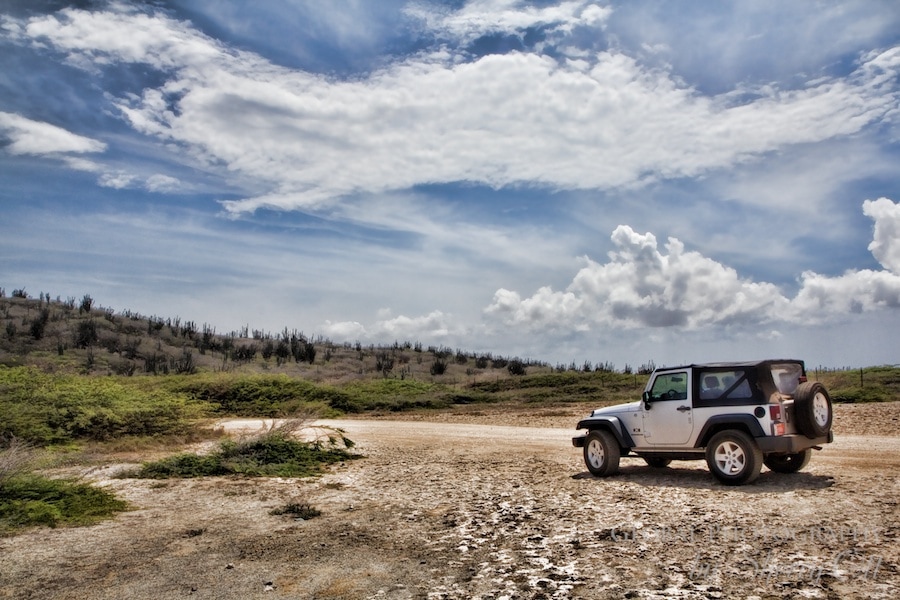 Offroading on the ‘wild’ side of the island 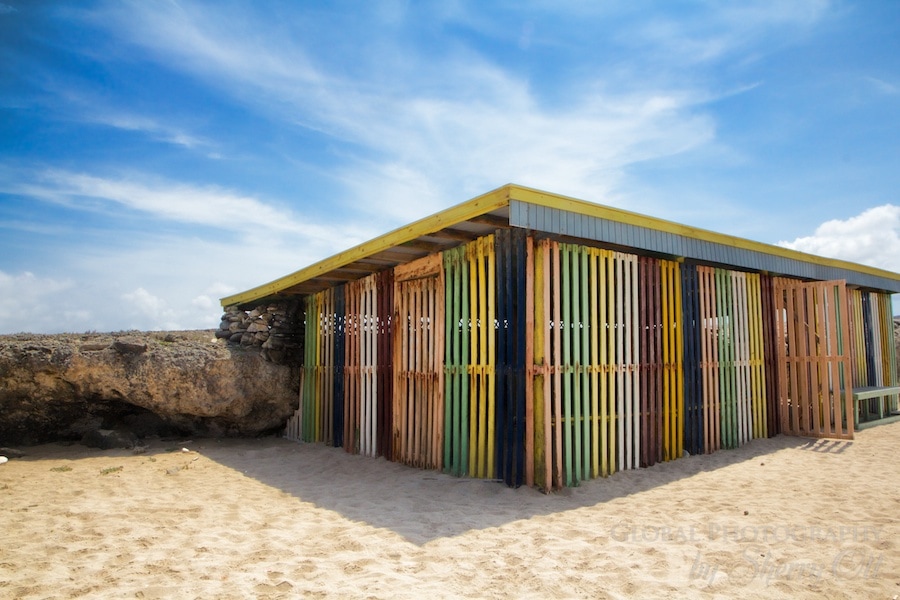 Abandoned building on the beach 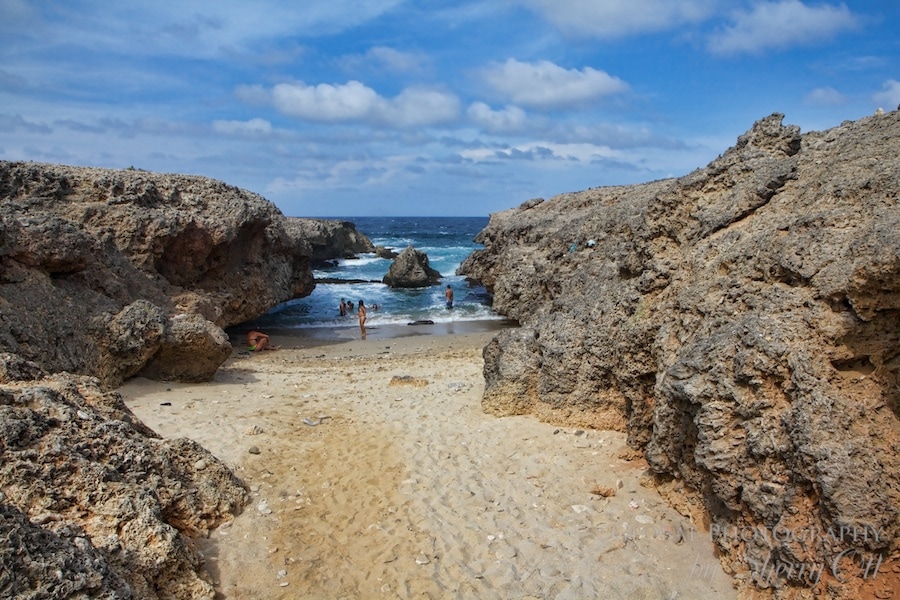 A local swimming hole. Came across this family enjoying their Sunday at the beach.

I stopped anywhere I wanted and took photos, explored abandoned buildings, and just enjoyed the non-pretty side of Aruba. I honestly had no idea where I was going â I just randomly followed trails â a real feeling of freedom.

The California Lighthouse is at the western tip of the island and is a strange sight with itâs numerous windows. The windows looked like they belonged more on a monument than a lighthouse! You canât go inside the lighthouse, but you do have some nice views from the hill. 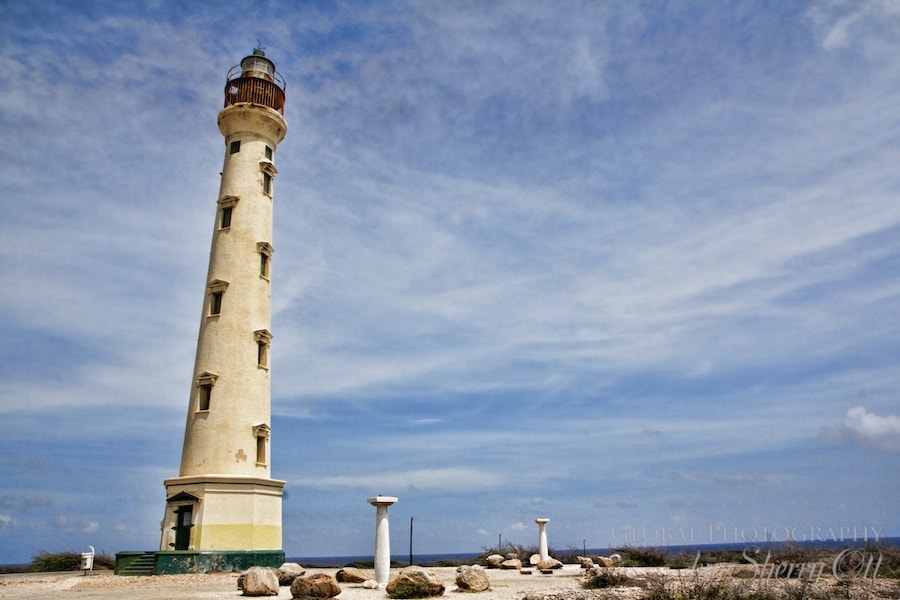 I loved coming upon this chapel from the rugged sea. It was surrounded by cactuses and rocks. The butter yellow chapel was tiny, but popular. As I was there a number of locals walked into the chapel to privately worship. I also loved the Lordâs Prayer broken up on multiple signs on the road as you left the chapel. 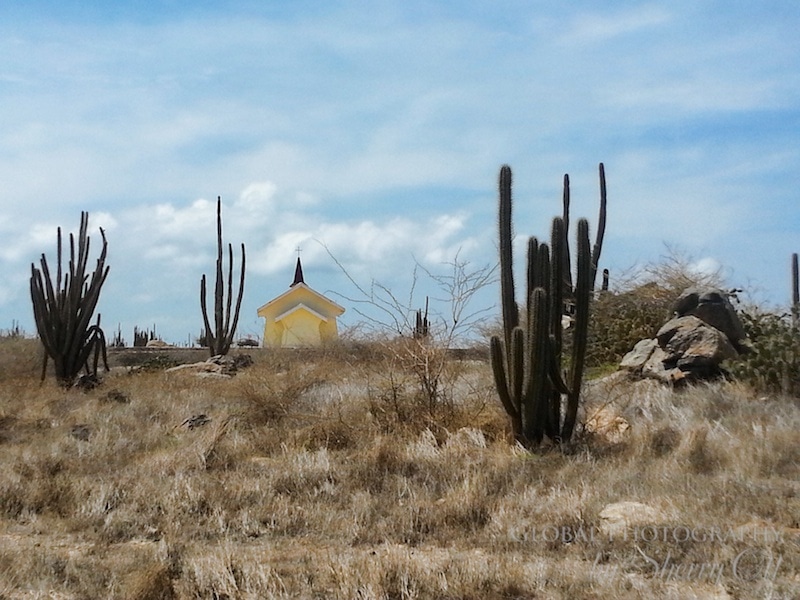 Even though our US National Parks are closed due to shut down â I was able to visit Arubaâs National Park â Arikok. Arikok takes up 20% of the island and itâs a nice reserve for various animals and has a number of hiking trails. I only had time to drive through it on this trip â but it looked like no other national park Iâve seen. It was barren of trees, but plenty of rugged shrubs and cactuses. It provided you great access to some secluded coastal beaches, caves, and views. There were very few tourists there and in fact I really only saw locals there at the beaches â a nice change from Palm (Highrise) Beach.Â  It also had a wind turbine farm at one end of the park that I actually found quite beautiful. 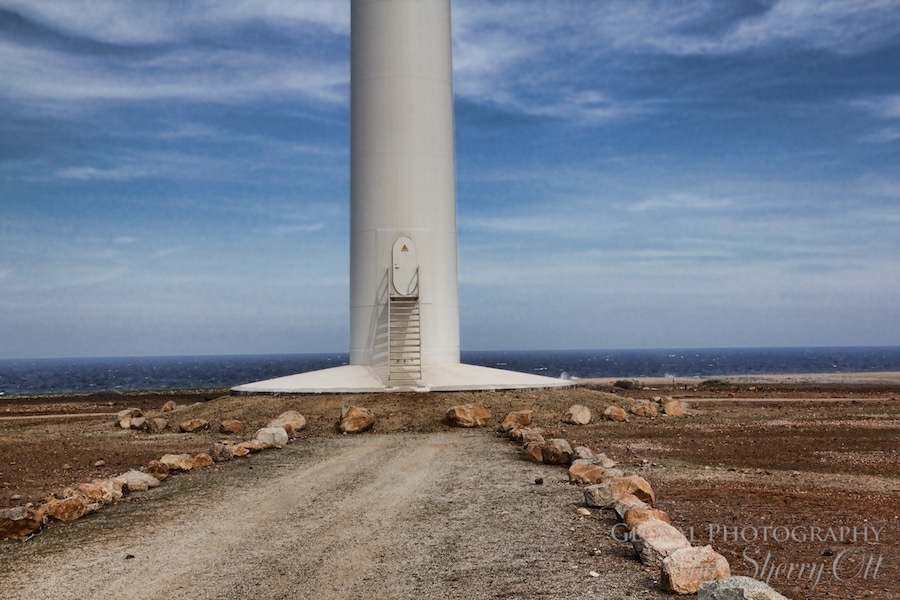 Cactus in the park

There was plenty of signs to the Natural Bridge, yet I have to admit it sort of fell short for me after seeing other rock formations. But it was a great place to get a feel for the power of the Caribbean waves as sea spray covered you and cooled you down!

On my 2nd day I got on the water and took a sailing/snorkeling catamaran cruise on the Arusun and it was the best bargain I found on the island â only $36 for a 3 hour cruise and snorkel with open bar and snacks. The Arusun was a Formula II Ocean Racing Catamaran and had journeyed around the world twice! It was fun to see the water and the beaches from a different perspective. The snorkeling was average â but we did get to snorkel in the open water around the Antilla shipwreck. Antilla was an old German warship sunk during WWII. It was really cool to be able to snorkel so close to a shipwreck and the amount and variety of fish were amazing in the deeper water. 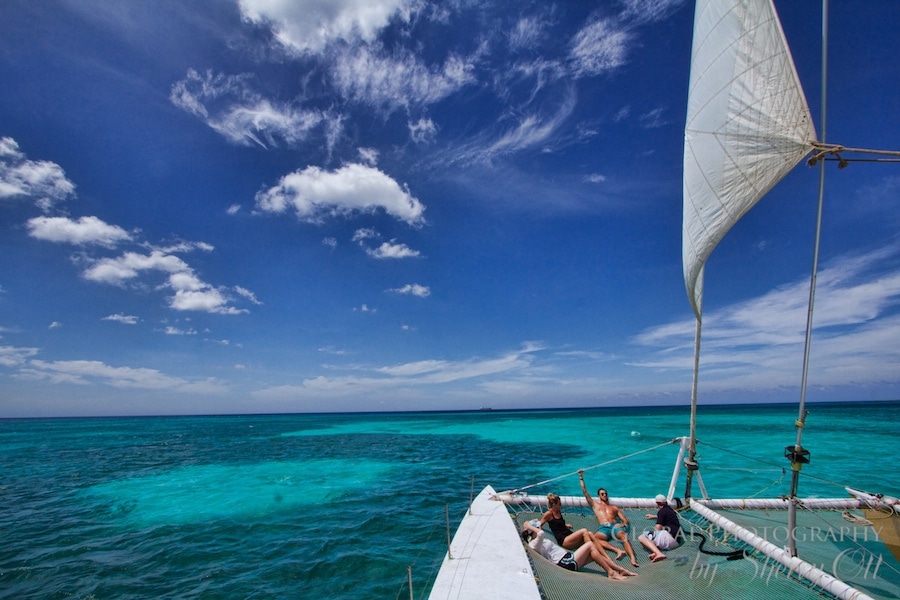 Sailing on the turquoise waters

There are tons of restaurants and chains to choose from along Palm Beach. I honestly wasnât thrilled with any of them but maybe thatâs because I was tired of eating out after 3 weeks of constant hotel travel. I spent most of my time enjoying the Plaza Club perks at the Radisson and their various restaurants on site. I even talked my waiter at the Sunset Grill to let me have a 4 course dinner that was normally for two â for one. Sometimes it pays to ask! I also found some great little piers for sunset and live music along Palm Beach. However my most exciting find was a little restaurant filled with character and locals on the South side of the island.

A place you wouldnât just come across â someone needs to tell you about it. Luckily my concierge at the Radisson provided me with this tip when I asked her for a restaurant recommendation that is local â no chains, no high prices, just a place where the locals eat. She pulled out the map and wrote down Zeerover and I was off on an adventure.

As I pulled up to the restaurant, which is tucked away off any main road and not something youâd accidentally come across, it looked a bit questionable from the front. This is normally the first sign that itâs going to be great! I went up to the little window at the front of the building and saw a white board with the dayâs fish and the sides listed. You order the food at the window and they take the seafood right out of the ice coolers there on the counter and put it in a plastic bag and then in a basket and it was then whisked away. This is fresh as it just came from the fishing boats out back! I chose the mahi mahi, shrimp, corn bread, and fried plantains. I went to the next window along the side of the building to get beer/drinks and then headed around to the back where there was lovely tiered seating deck right on the water. All of the seafood was fried â and it was all done in an outdoor âkitchenâ on the deck. Fishing boats were docked right up next to the restaurant. And the best was that it was filled with locals. 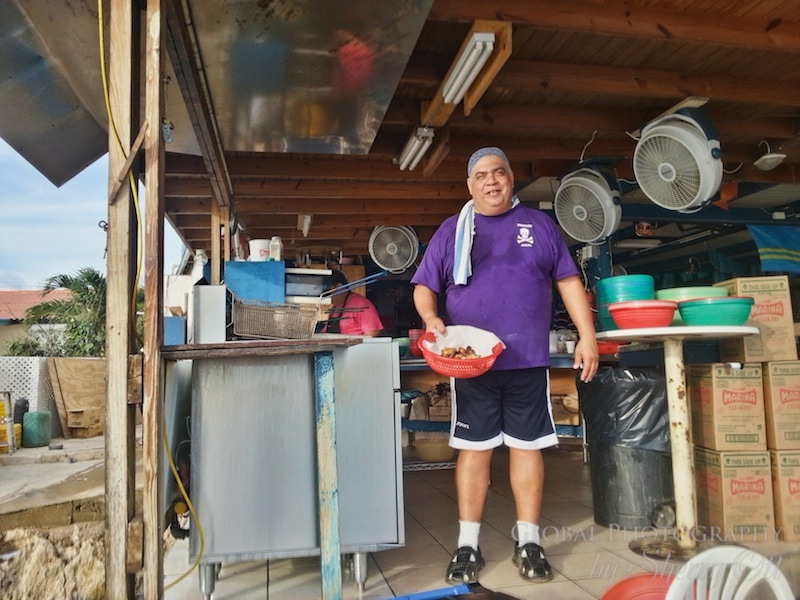 The fish man! The ‘chef’ at Zeerover has a deckside kitchen. Zeerover deck seating and menu board

I took my wooden block with my number on it, my Balashi (local) beer and found a plastic table on the dock â a perfect setting for eating fresh fish. The fish and shrimp were delicious and the plantains were perfectly sweet with the fish and garlic shrimp. The corn bread had a hint of corn taste, but the texture was different than normal corn bread â it was spongy â but good. I love everything about this casual restaurant. Skip the chains and big restaurants â and go here.

Aruba was a super way to end my whirlwind tour of North America â relaxation, pampering, and beautiful weather all in 48 hours!