Finding the Adult Side of Orlando 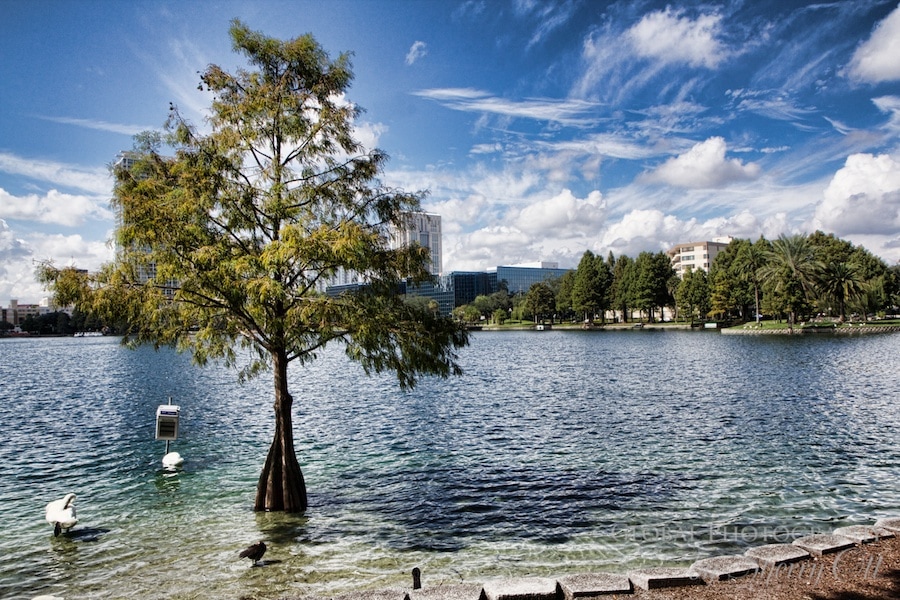 Is it possible to go to Orlando, stay near Disney and not go to a theme park? I was going to put this question to the test over the next 48 hrs. Orlando is not a normal place on my list of places to travel to â at least not as a solo child-less traveler. Solo or not, I actually struggle with Disney as a travel destination. I totally respect what theyâve created and in many ways its some of the most creative, advanced things Iâve seen when it comes to the travel industry. But I guess I just get sad when I think that people are seeing the world through a manufactured Disney experience as opposed to getting out and seeing it themselves for real – the good and the bad.

I donât hate Disney â Iâve been there 3 times before, however this time I was here on my own. I didnât really want to go back to places I had been before so I decided to opt out of the theme parks and instead try to search for adult activities in Orlando. I didnât skip Disney altogether â in fact I hovered around the fringes of Disney the whole time I was there â but I was looking for adult solo traveler experiences â and Iâm happy to report that I found them!

Adult things to do in Orlando

I focused on adventure while in Orlando rather than food and culture â however I did get to a bit of everything in my 48 hours. In the theme park vein – I decided to make one whole day dedicated to a theme â outer space. I liked to call it my Blogger in Space day!

What travel blogger doesnât dream of going to space? Since I had a rental car, I decided that making the 50 mile drive to Cape Canaveral and the Kennedy Space Center was a great way to spend an adult day in Orlando. The ticket price ($50) was a bit less than the regular theme parks â but this was less of a ‘park’ and more of a museum. In fact, my real interest was in seeing the new Atlantis exhibit which just opened this summer. 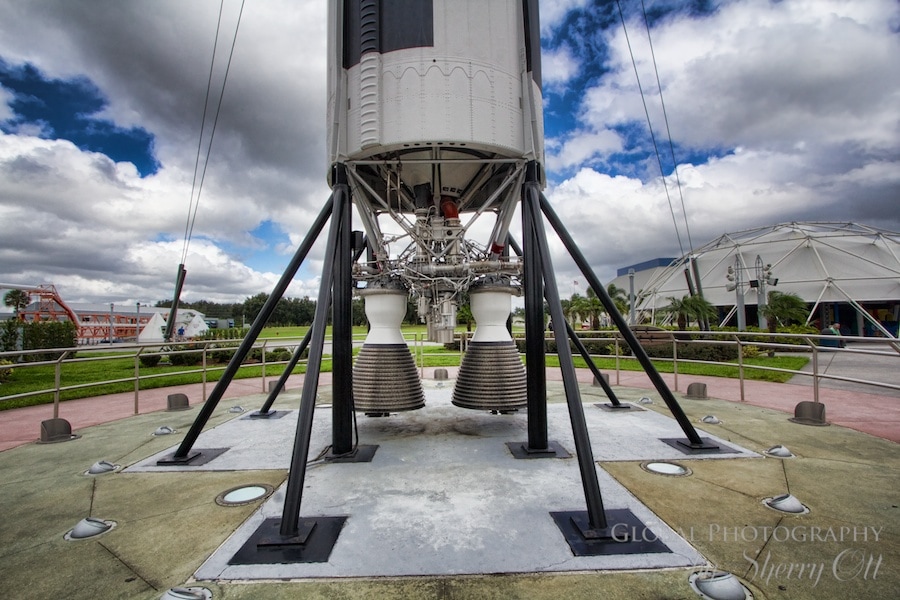 The Rocket Garden at the Kennedy Space Center 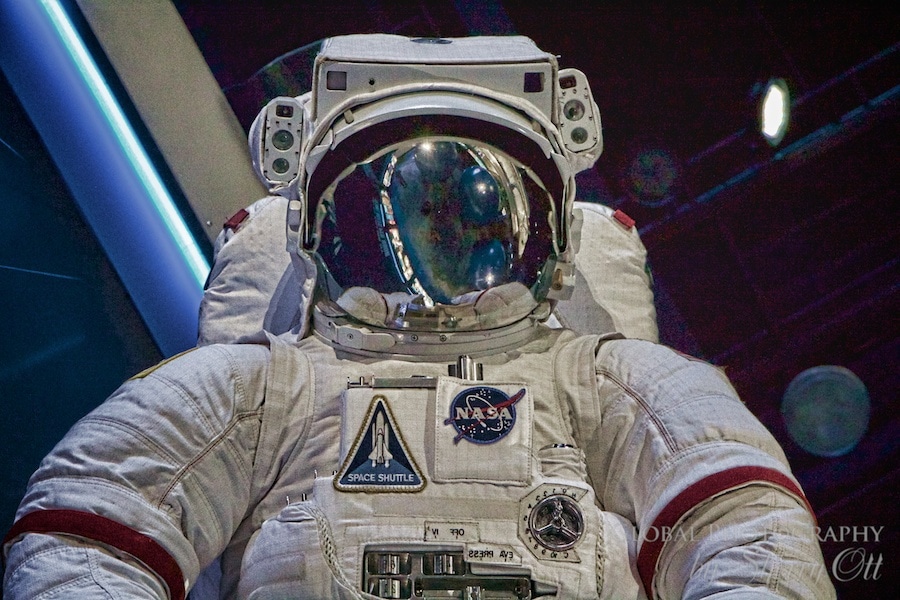 The KSC was a good mix of adult and kid things and I spent a solid 4 hours there and still had things I didn’t see. If you want to get a feel for your place in the world then I highly recommend the IMAX 3D movies. They had 2 playing â one on the Hubble Telescope and one on the International Space Station. As we traveled through galaxies â I was in awe of what I was seeing on the screen â it made my head hurt to try to grasp the vastness of what I was seeing and where my place was in it.

The Atlantis exhibit was half exhibit and half Broadway show. I was amazed at how produced it was â but it was effective. You were led through a number of short movies which set up the original visions of NASAâs shuttle program and then with a music crescendo perfectly timed with the screen raised you saw Atlantis.Â  It was suspended from the ceiling in the big exhibition area. The experience was so moving that people actually clapped! There were many informative exhibits and even a launch simulator to get a feel for what it was like to be a shuttle astronaut. Overall â a great adult or kid time. 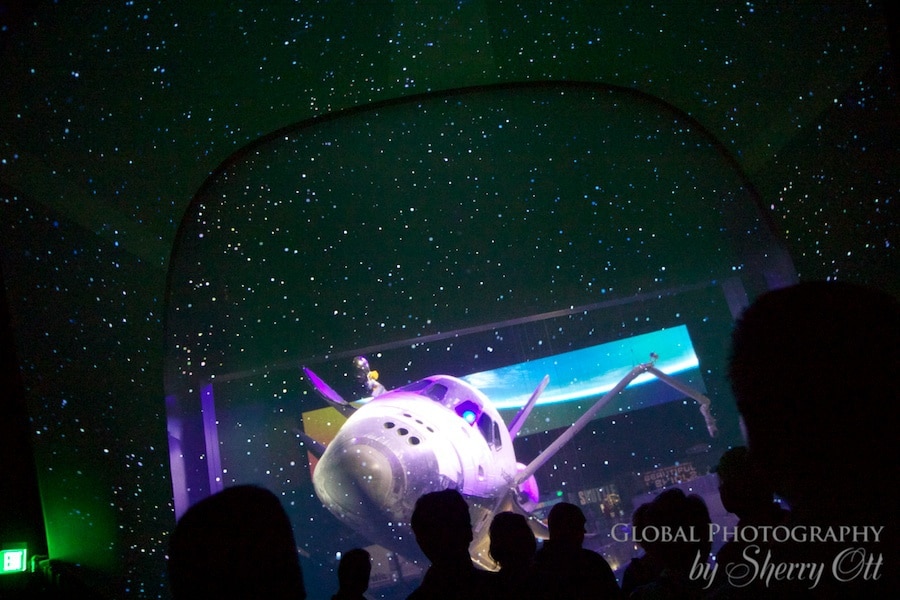 Raising the screen and revealing Atlantis 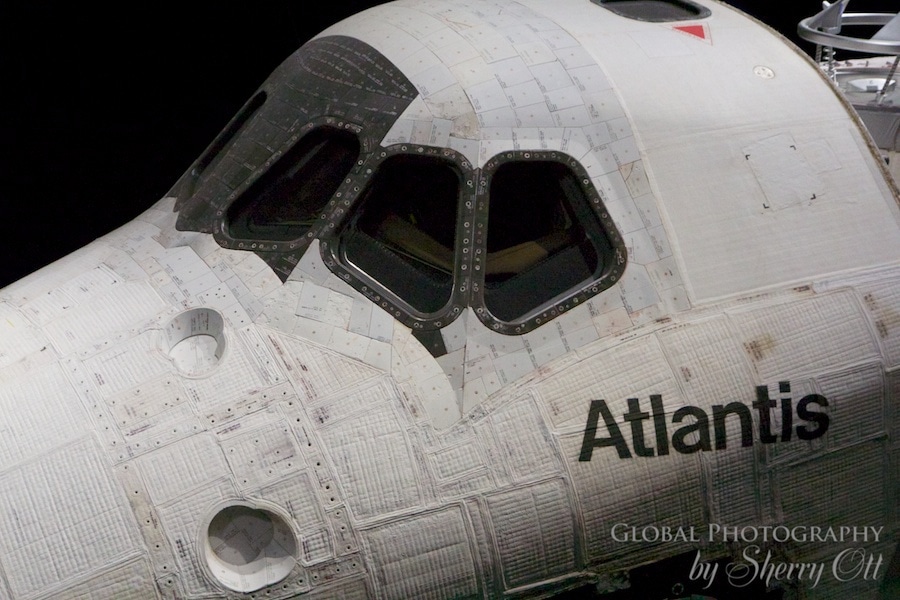 The Radisson staff had told me about the Downtown Disney theatre complex where you could dine in and watch a movie. I love the idea as I seldom go to movies and Iâve certainly never ate dinner at one. Of course to round out my âBlogger in Spaceâ day I went to the movie Gravity at the dine in theatre . The movie was in 3D and Iâm embarrassed to admit that this was the first 3D movie I ever went to! I ordered a beer, Panini, and fries and reclined back in my comfy chair watching Sandra Bullock drift in space. 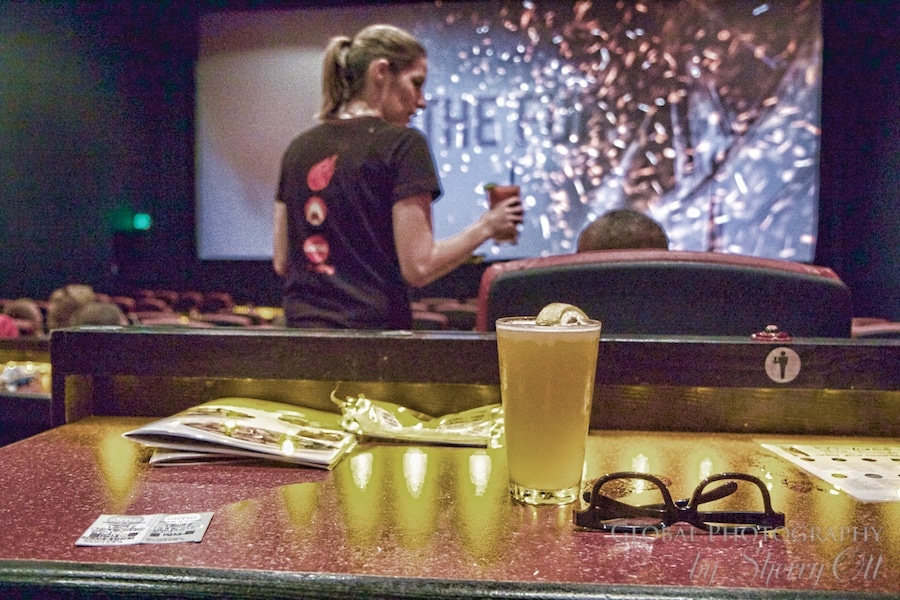 Waiters serve you during the movie!

There was one thing I really wanted to do in Disneyworld â I wanted to drive fast. Ever since going to the F1 race in Valencia a few years ago I have wanted to ride in a race car and Disney had their very own race track and driving experiences. You could choose from a ride along or a drive yourself option which required a short class before taking to the track. I wanted to go as fast as I possibly could â so I opted for the ride along for 3 laps where we would hit speeds of 145 mph in proper race cars, tires, jumpsuit, helmet and all. Billy was my driver and you can see how it went here in this short 2 minute video:

On to the non-manufactured experiences â thereâs much more to Orlando than theme parks âlike just a regular old scenic park! Lake Eola is a symbol of the city â a lake near downtown with a great walking path, amphitheater, fountain, and many swans and birds. Itâs a great place to stroll or you can even get on the water on a little swan paddle boats. 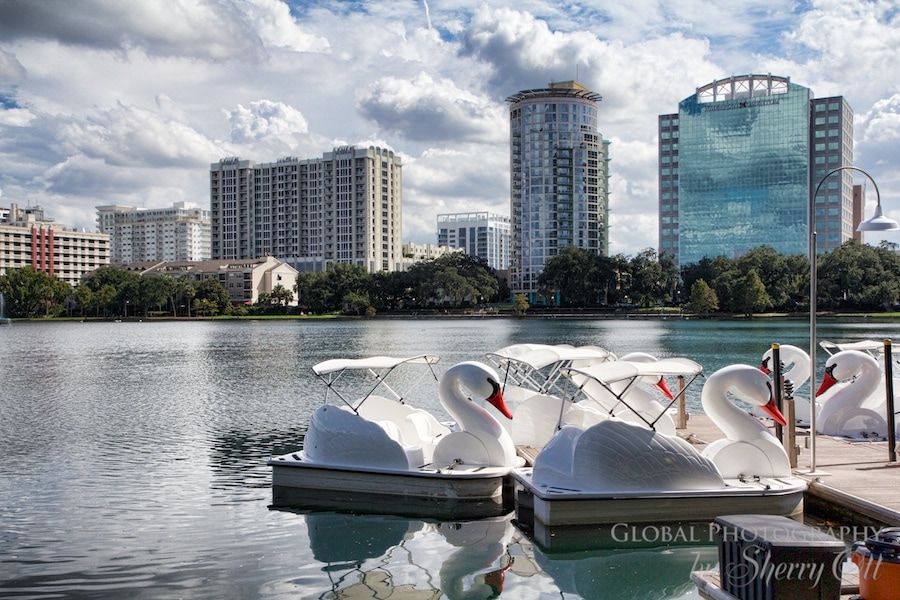 Food to try in Orlando

Move over cupcakes â I have found the next big dessert craze in Orlando! After my stroll around Lake Eola I stopped at Hyppo, a popsicle shop. But these arenât the popsicles that you remember when you were a kid â these are based on the Mexican paletas (Ice pops). They come in two versions, milk based or ice based. I walked into Hyppo and was greeted by a colorful cooler of pops with flavors ranging from pistachio coconut, the Elvis (peanut butter, banana, honey), cantaloupe black pepper, strawberry basil, keylime, and even some bourbon based pops!

I talked to the owner, a young guy names Brandon, who told me they flavors constantly change as they make whatever is in season and have even made beer pops before! It was so hard to choose just one, but my pistachio coconut cream based pop was delicious! 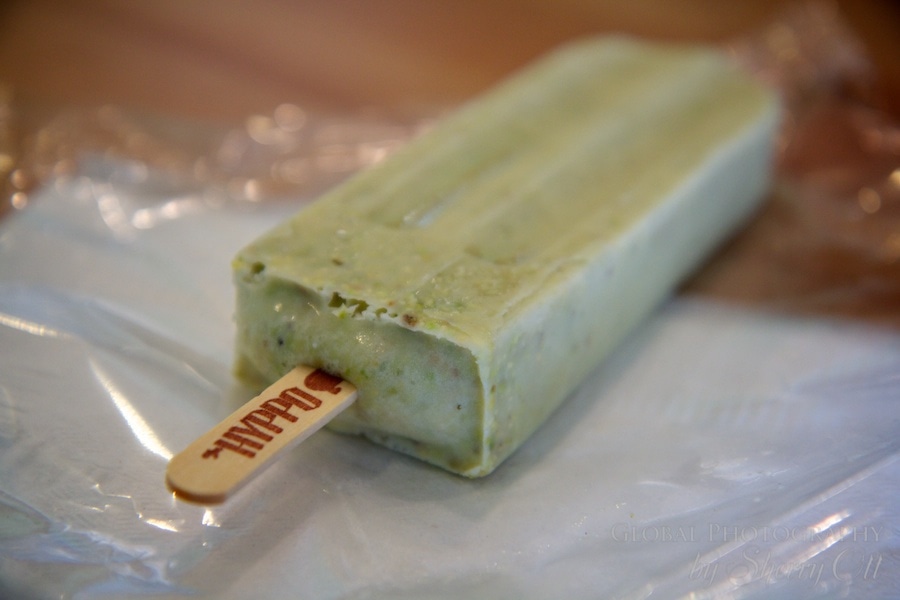 While at Hyppo eating my ice pop, Brandon gave me some great local tips and one he mentioned the very unique Imperial Bar. Once I heard about its premise â an antique store that turns into a wine/beer bar at night utilizing the antique furniture for the bar seating – I knew I had to go check it out.

The owners at Washburn ImportsÂ  specialize in finding one of a kind items from all over Asia and the Pacific, and they apparently are also good at coming up with one-of-a-kind ideas too. There is a âcenterpieceâ bar that was specially constructed from other old imported pieces. For example the bar itself was made from old doors from India. The room was full of antique tables and chairs in a mishmash shabby chic way where people could sit and have their wine/beer. The price tags were still on the tables and chairs which I thought was clever because who doesnât love to shop after youâve been drinking! I ordered a Belgian beer and browsed around the store in awe. They even bring in a band on Thursday nights who sing among the antiques. 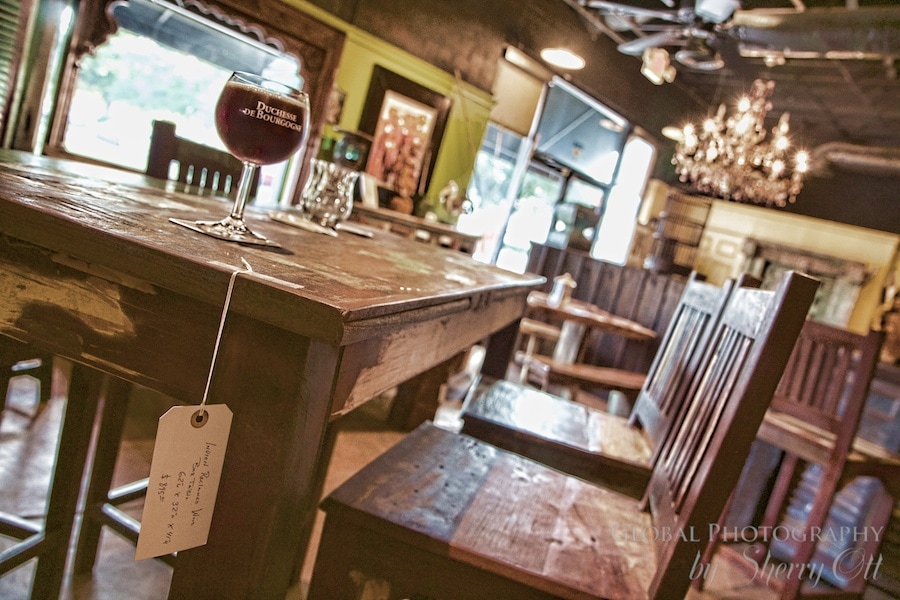 Sit on antique tables and chairs and enjoy your drink. 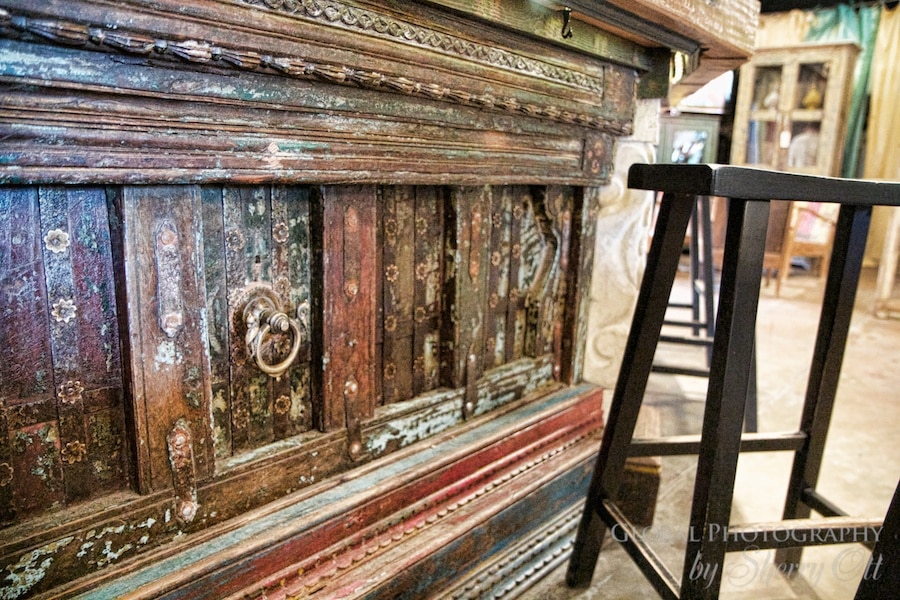 The bar made of old doors from India

I had been told that Mills 50 neighborhood was the place to go if you wanted Asian food. This recently renamed neighborhood used to be called Little Saigon so it didnât take me long to find Pho88. The pho was good, but the neighborhood wasnât what I was expecting – it was a bit more sprawling that what I was used to in Asian neighborhoods in NYC or San Francisco. There were not only Vietnamese restaurants, and Asian markets there – but also a strange array of other stores selling balloons, rubber stamps, tattoos, and crafts. 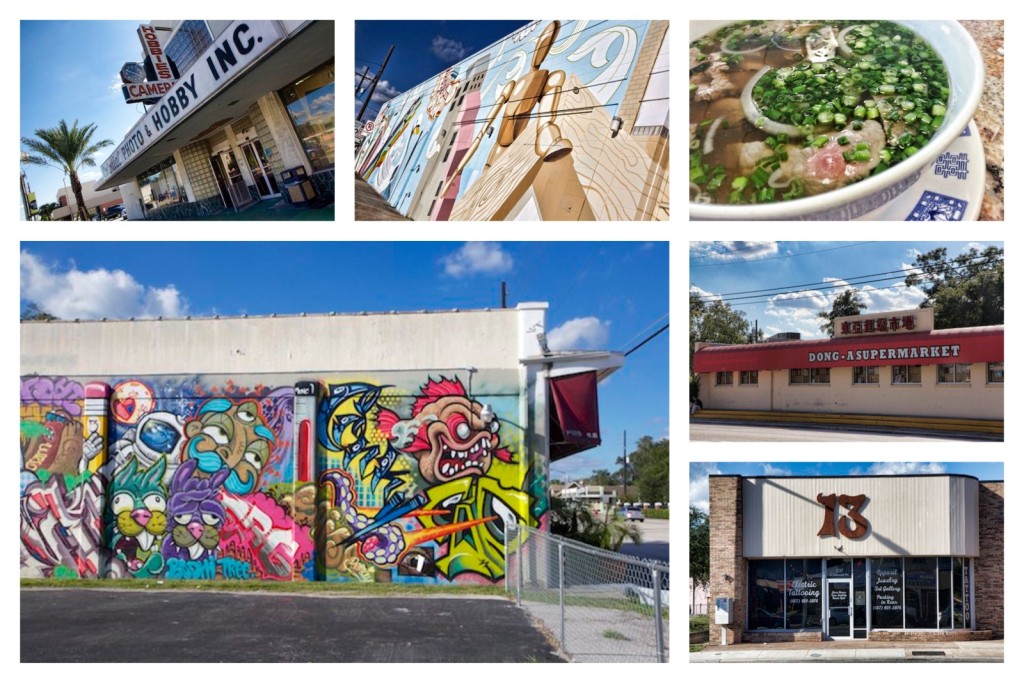 Sometimes it pays to walk into questionable hallways. As I was walking around Mills 50 I saw a sign that said Che. Che is my favorite Vietnamese dessert – a soup often prepared with one of a number of varieties of beans, tubers, and/or glutinous rice, cooked in water and sweetened with sugar and garnished with coconut crÃ¨me. I had never seen a store in the US that specialized in just che so of course I followed the sign. It led me into a abandoned looking hallway and just when about ready to give up the search thinking the sign was old â I came across the tiny little store. I think the Vietnamese woman inside was pretty shocked to see me â and even more shocked when I ordered something! I had the sticky rice dumpling with ginger sauce and talked to the owner a bit who was originally from Vietnam. If you want a real authentic dessert â then stop by Che 789 at 1210 E. Colonial Drive #9 â and donât be afraid to go down the hallway! 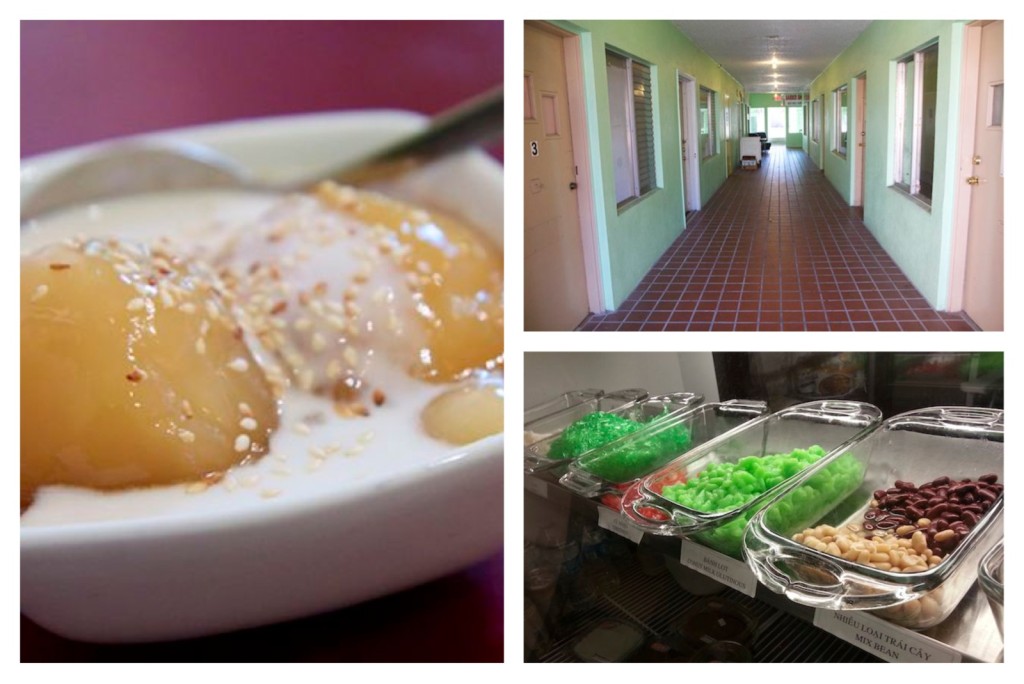 Just go down the hallway and turn left for delicious Che!

From the moment I walked into the Radisson Orlando I was hit with a wave of hospitality. In fact Iâve never had so much attention paid to me by the cleaning staff in particular! The Radisson is positioned perfectly for all of the theme parks and they run a shuttle to Disney so it was a great way to stay in the heart of everything but have your options to go anywhere. The manager, Terry, told me that the hotel had visitors from over 170 countries total and they had staff working there that represented 14 countries. This little swampy land in Florida was really a cultural melting pot!

After spending all day at theme parks or in my case â adult activities â you really just want a comfortable room to come back to â and thatâs what the Radisson specialized in. Iâd put on my fluffy robe, eat my pillow chocolates, marvel at what new towel origami that the cleaning staff would come up with and then Iâd pick my number â my sleep number. This was a first for me â the Radisson had Sleep Number beds! I tried a different setting each night to figure out what I liked. After all of my intense research, Iâm pretty sure Iâm a 30. 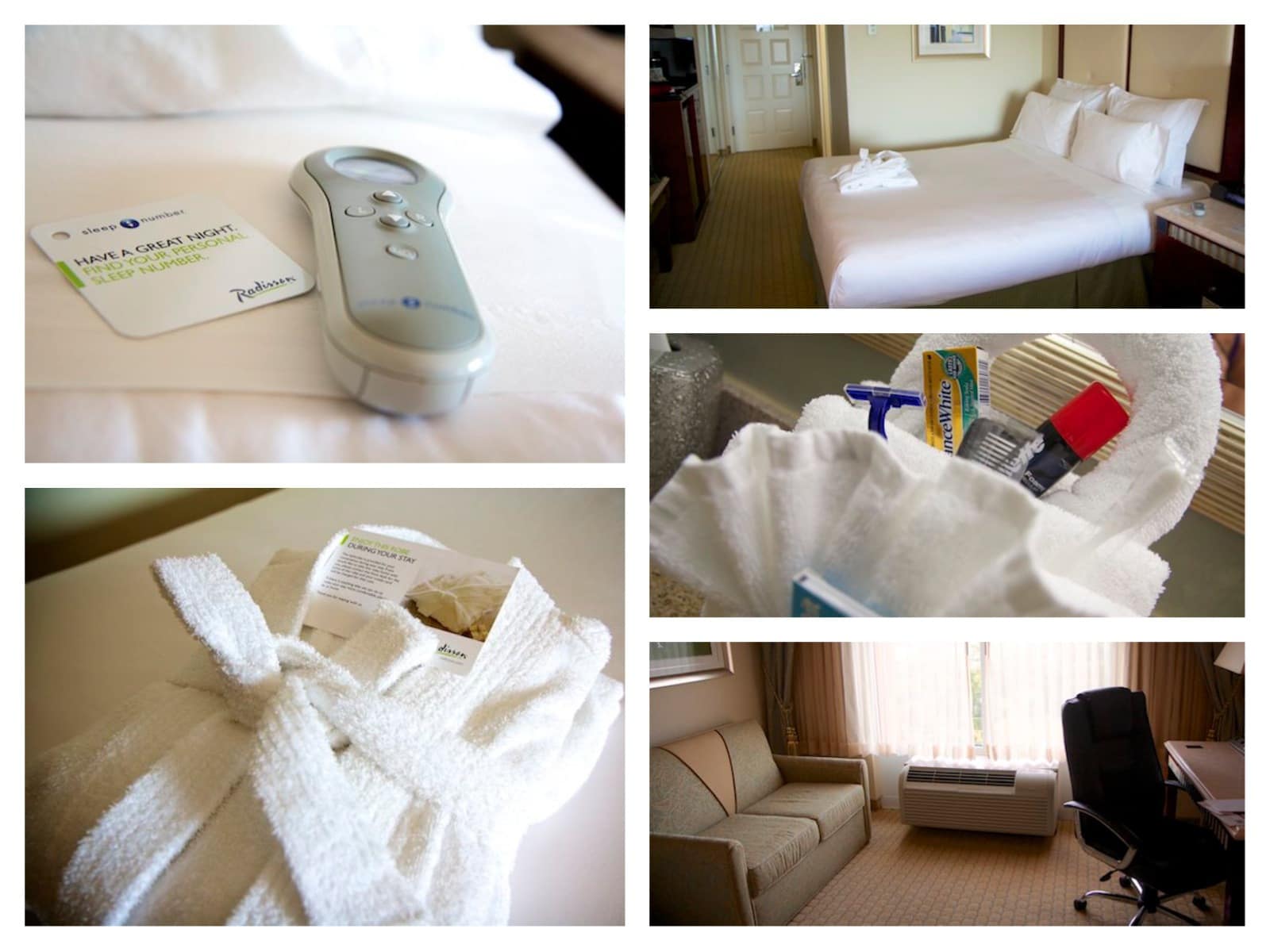 I think I was pretty successful at finding adult things to do in Orlando â do you agree?

One stop left on the Club Carlson itinerary â and it’s a new country for me – Aruba!

16 Responses to "Finding the Adult Side of Orlando"