24 Hours In Savannah as #GlobalTravelerSherry 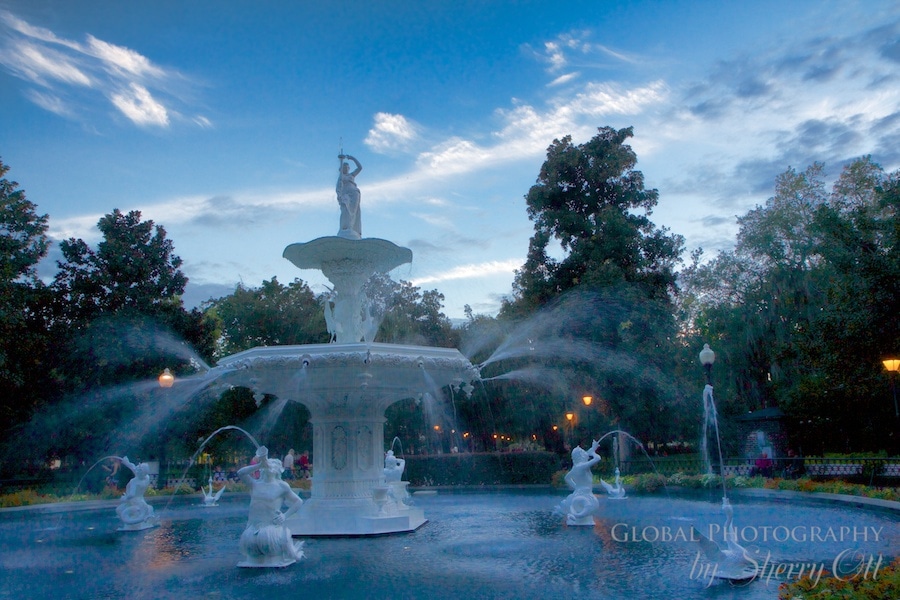 The street was lit by a yellow glow of street lamps and moonlight. I had just done every bit of photography I could fit in before the sun went down in Savannah and now I was starved after a long travel day. I checked my map and made sure I was going in the right direction to the pub that the woman at the front desk of my hotel recommended. And thatâs when it happened – a black cat darted across my path and startled me. Before I could even process the âmeaningâ of it, it quickly darted back across my path the other way. I stopped walking and sighed loudly mumbling to myself â âGreat, bad luck is all I need.â I tried to convince myself that since it had crossed twice that maybe it negated the bad luck â right?

Moments later while at dinner I received some bad news in my email that sent me off on a tangent that occupied my mind and sleep patterns for the next two nights. Itâs not important what it was, but what is important is that Savannah has power â a weird power. Maybe thatâs why it calls itself the “Most Haunted City in Americaâ.

It seems that every city I arrive at further along in my Club Carlson Global Travelerâs Itinerary I have less and less planned â and Savannah was the worst yet for planning. What made this even more of an issue is that I really only had one day in Savannah â so trying to figure out what to do in this uber popular destination was difficult.

I relied on the staff at The Country Inn & Suites Historic District more than ever on this leg and they made my 24 hours memorable!

A Hotel with Southern Hospitality

The woman at the front desk was going through the standard âcheck-in welcomeâ information which I had kind of tuned out as I was preoccupied with how I was going to best utilize my short time in Savannah â and thatâs when I heard it. Laundry facilities. Wait a minute â âYou have laundry facilities?â I asked excitedly.

She went on to explain that not only did they have a washer and dryer for $3 total but they also had detergent I could use. Woohooâ¦clean clothes at last! Itâs a bit sad how excited I was about doing laundry â but this was the first hotel that I came across on this trip where I could do my own laundry â and that made this carry-on traveler happy. Tonight was going to be laundry night! 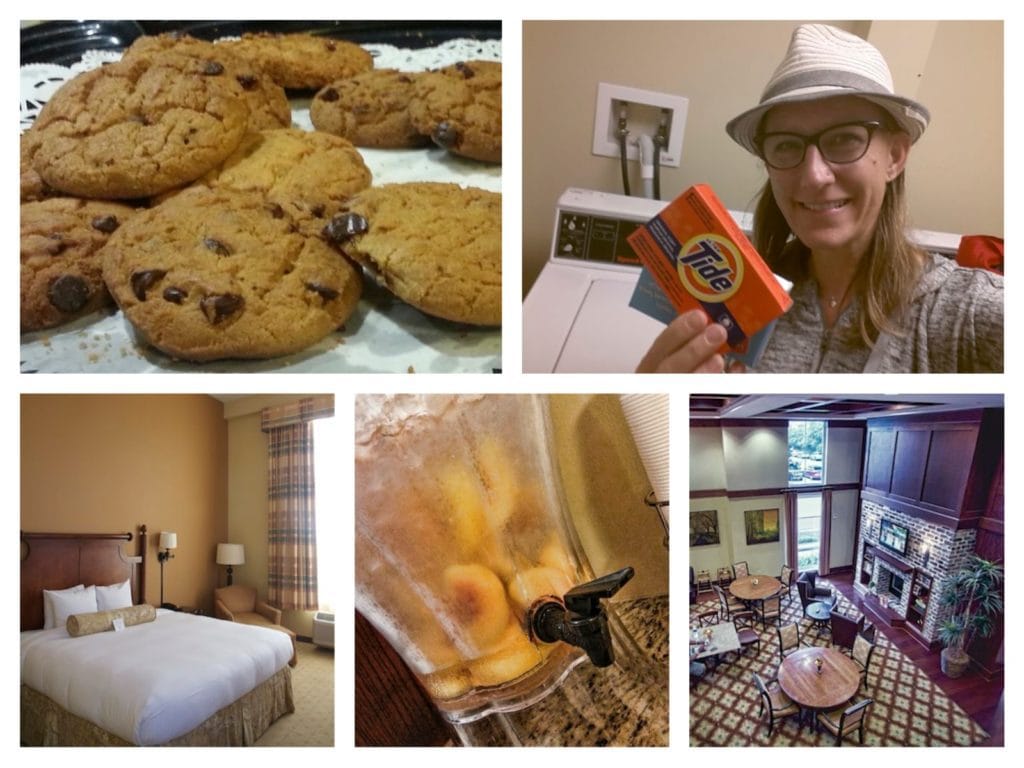 The Country Inn & Suites Historic District was in a super location and they were the most helpful front desk staff I had encountered in this trip. Everyday they had freshly baked cookies put out along with the most refreshing peach water I had ever tasted. And in true southern style, my room had super high ceilings and windows making me feel as if I were in a Southern plantation home waiting for Rhett to come rescue me.

Besides doing laundry and eating cookies though â I spent very little time in my room â I had a lot to see in Savannah and a short time to do it!

What To Do in 24 Hours in Savannah

Iâm probably the only person who went to Savannah and has never read the book âMidnight in the Garden of Good and Evilâ, but there is no pre-reading necessary to simply walk around the town and enjoy the views.

All you need is comfortable shoes, and you can easily stroll around the parks and streets of Savannah for hours â especially if you like photography like me. If you are a person who likes order above chaos â then Savannah is the place for you. Itâs a perfectly logical city of grids and parks. Walk a few blocks in any direction in the historic center and youâll soon be at a lush green park lined with wooden park benches, an occasional fountain, and a monument with some man in military gear at the top. The parks were magical, serene, and filled with gorgeous old Live Oak trees that spread out like umbrellas. I love to photograph trees and even have a Tree Pinterest board â so I was pretty excited about the Live Oaks and their hanging Spanish moss. 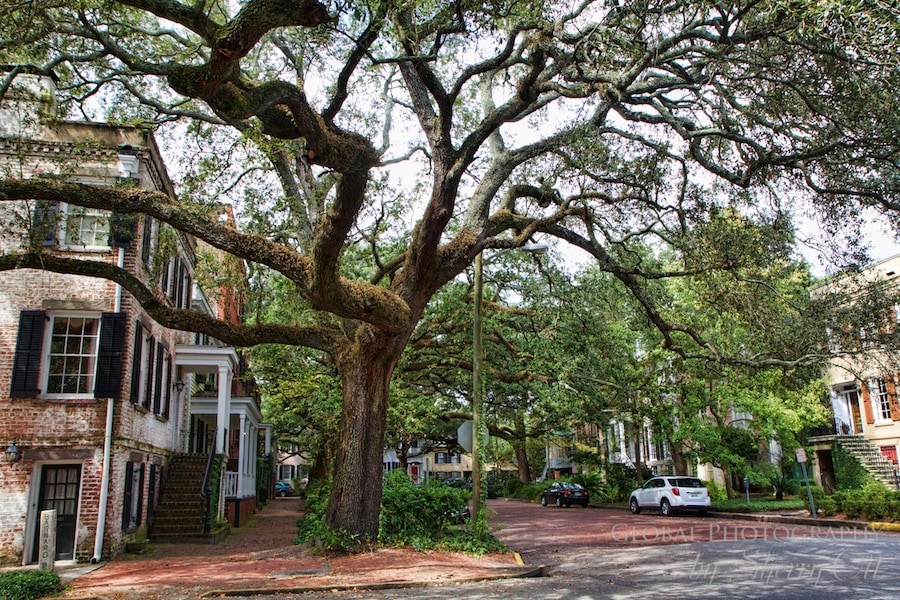 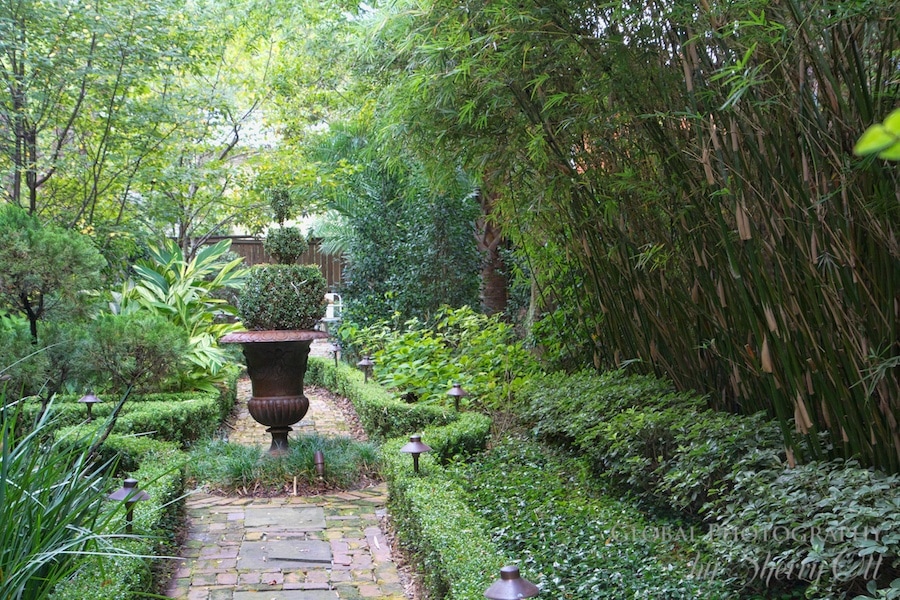 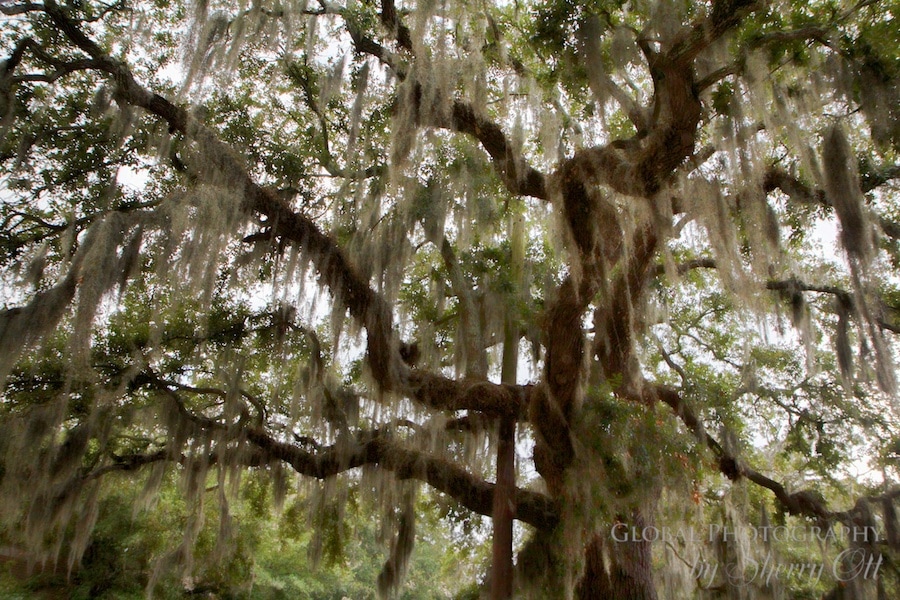 Spanish moss hangs from the Oaks in Savannah

This is probably one of the most famous sights of Savannah â a large public park with a perimeter of old Victorian homes. I arrived in the park as the sun was going down and the music was starting up. The night I was there it was the annual park picnic and Savannah Philharmonic concert. The park was filled with thousands of people all picnicking and partying â in various arrays of formality. It was great to catch a few Mozart pieces and observe the local community come out and enjoy the arts. I even stopped at the Victorian picnic to check out their high tea picnic. 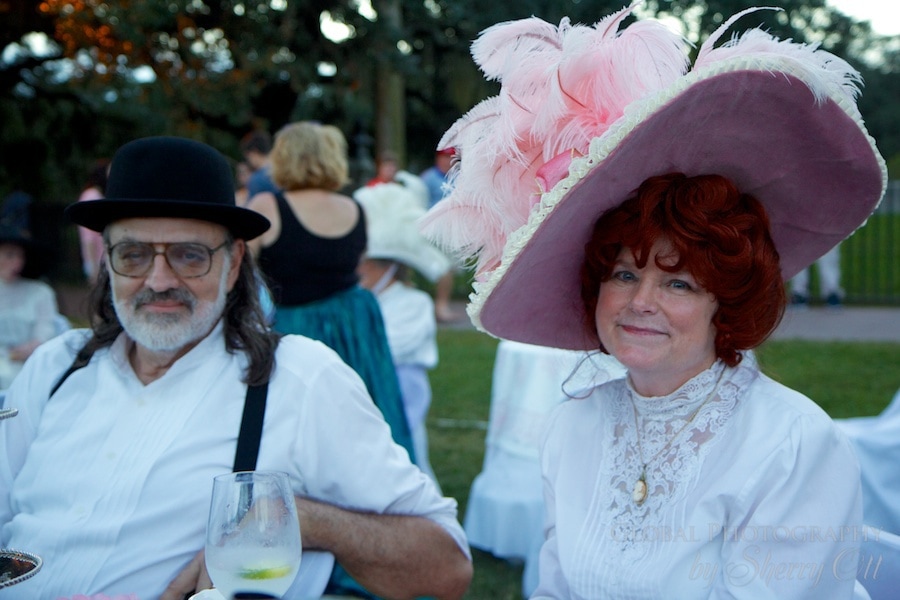 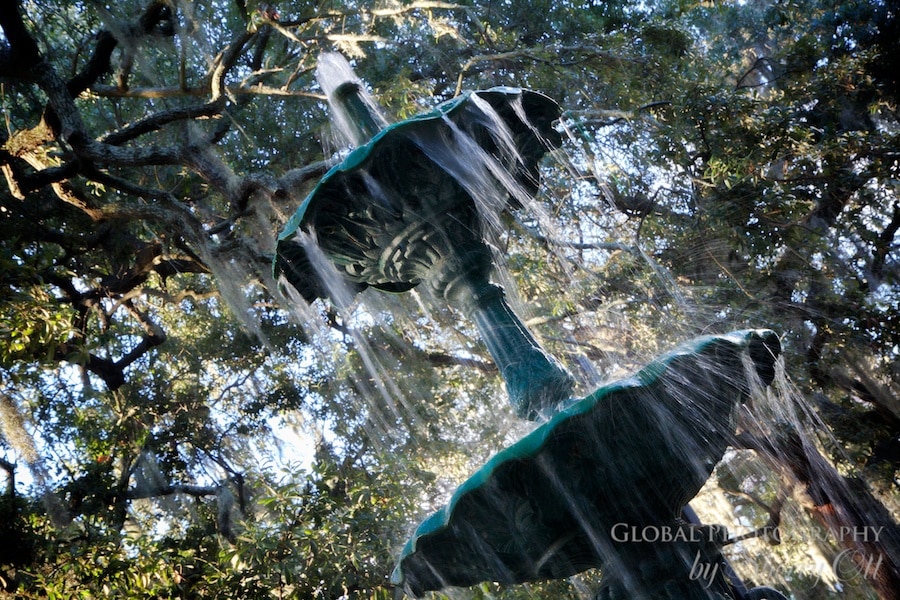 I walked in the Juliette Gordon Low House and saw a sign that read,

I knew there was a reason I was a Girl Scoutâ¦yet I never did get the hang of hula hooping. You can tour the house where Juliette Gordon Low, the founder of Girl Scouts grew up. The tour simply takes you through the ornate house (no photos allowed) which is filled with antiques which have been impeccably preserved. The guide also walks you through the life and times of Juliette. She was a remarkable woman who not only felt that girls were capable of much more than anyone thought in those days, but she was also an artist. She was a painter, sculpture, clothing designer, and even a blacksmith. She made the iron gates for home. If you ever were a Girl Scout or if you simply love antique and old houses, then itâs worth a stop. The only thing they were missing was a plate of Thin Mints. 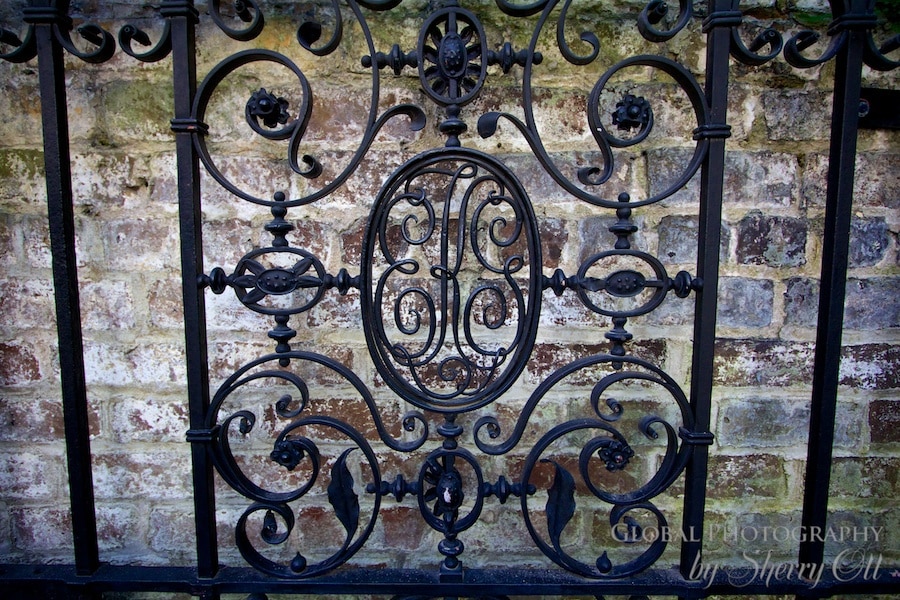 Since I was short on time, and a big, bad rainstorm was on the way, I decided a way that I could effectively use my time was by doing a trolley tour. On the advice of the concierge I took the Old Savannah Trolley Tour – it was a nice way to get around the entire historic district and I did enjoy the various actors who got on the trolley at some stops and told a more personal story about the town. 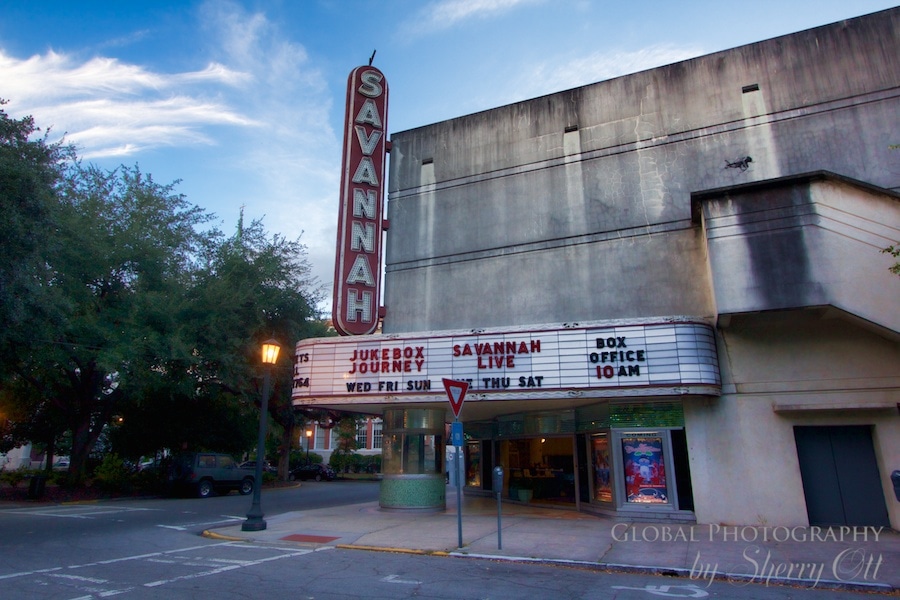 The oldest theater in the country 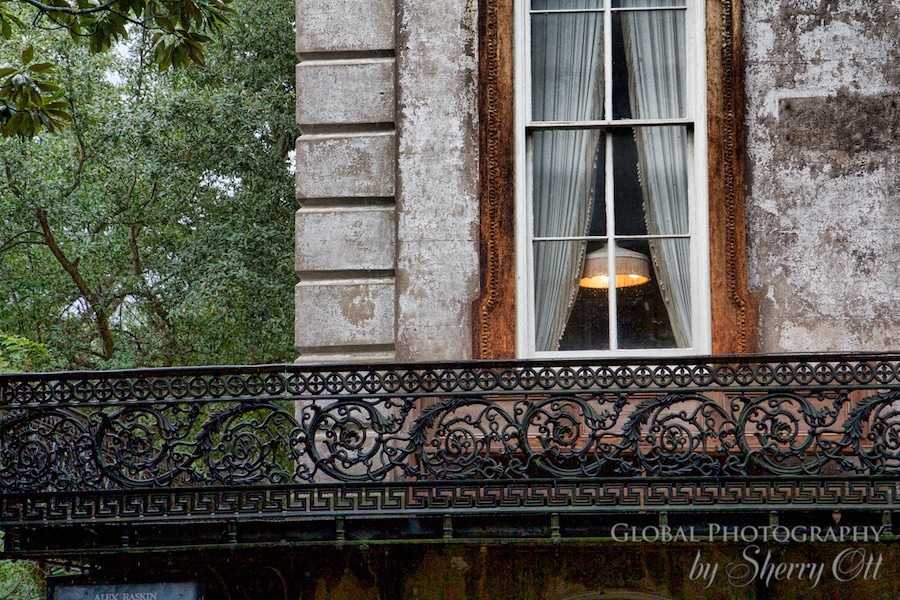 Since I was in the most haunted city and I had a run in with a black cat, I thought I better do a ghost tour. There are so many to choose from itâs a bit ridiculous! But I just chose to do a simple walking tour at night. However, before I started ghost hunting, I first decided to have a beer to help me suspend my logical side of my brain â a little pre-tour prep. It was a pretty simple night tour that included a walk around the town and hearing a number of stories about strange spirit sightings, hangings, and the prevalent theme of building on top of cemeteries. It was a fun night, but I think I personally need more beer for these tours!

A number of people had told me about Mrs. Wilkes and her family style southern cooking, however there was one catch to it â there was a line, a big line. A line gathers each morning starting at 10AM outside of Mrs. Wilkes house. The doors open at 11AM and the people start to flow in like clockwork. I had heard about the plates of fried chicken and collard greens and I was dead set on getting me some. However this line thing was a problem since I had very limited time â thatâs where Miss Kai came in. Kai works at the Country Inn & Suites and had graciously agreed to help me out on my time-strapped day â so I asked the biggest favor of all â could she get me into Mrs. Wilkes minus the line? Kai looked me up and down, paused, and in a very serious southern drawl tone asked, âAre you wearinâ pants with an elastic waist band?â

I thought for a moment doing a mental inventory of what I put on today, and a smile crept across my face and I said , âYes I am!â
That day at noon I found myself and my elastic-waist capris walking through the back door, into the kitchen of Mrs. Wilkeâs House. We joined a group at a big family style table already topped with about 20 different bowls of food and a platter of fried chicken. The rest of the table was filled with tourists and even a few locals, we all did some polite introductions and then the eating frenzy began. And it seriously was a frenzy. I felt like my heart rate went up as we passed the bowls and bowls around the table. I tried to conserve space on my plate the same way I do during Thanksgiving. Fried Chicken was the best I’ve had…and yes, I had 3 pieces. 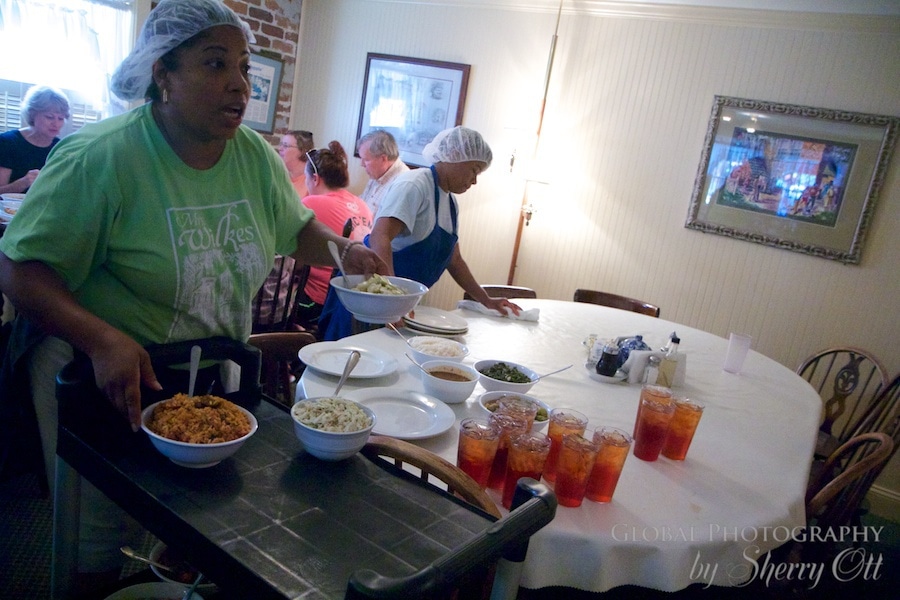 Hope was the conductor of Mrs. Wilkes. Here she’s filling a table with family dishes 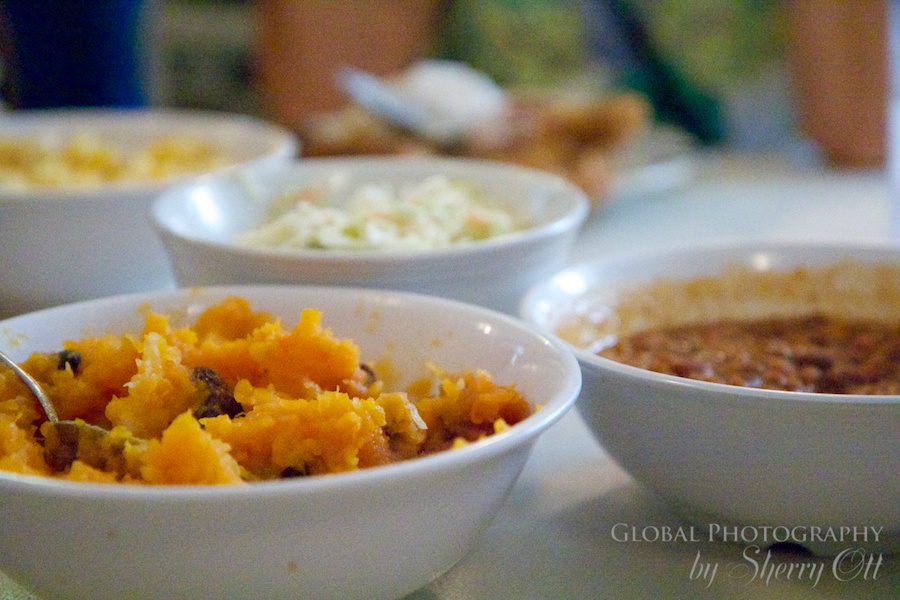 A table full of food!

Yes â Kai and I rolled out of Mrs. Wilkes that afternoon.

Another simple but good local spot I was told to go to was Crystal Beer Parlor. It was right behind the hotel and had been open since 1933 surviving prohibition. The outside was simple, but when you walked inside it was welcoming and full of locals. Most of the interior of the bar and restaurant were the same as it was when it opened. I had the fried green tomatoes and even enjoyed some peach cobbler for dessert. Yes â I rolled out of there too.

Even with the short time, the rain storm and my lack of plan I still took a lot of photos! Photos in Savannah are definitely about capturing a mood â a good challenge for me.

I left the black cats and ghosts of Savannah under the cover of darkness via Amtrak train and headed towards Orlando – my next stop on my 7 city itinerary!

Remember: Support Me For a Chance to Win 1 Million Club Carlson Gold PointsÂ®!

You can support me during this 3-week trip by visiting theÂ Club Carlson Global Travelers PageÂ daily and clicking on the âSupport Sherry Ottâ button, and following the instructions from there.Â Â Terms & Condition

15 Responses to "24 Hours In Savannah as #GlobalTravelerSherry"