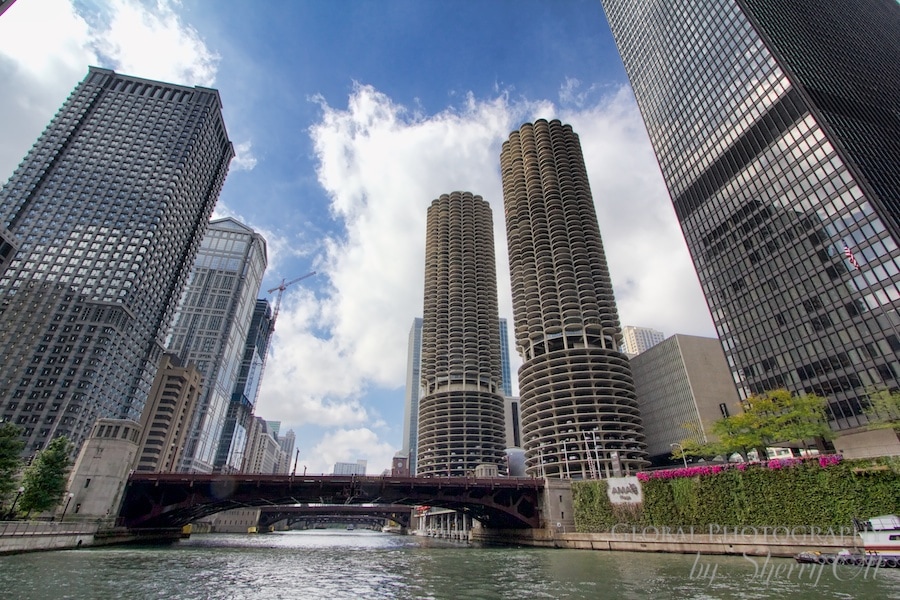 View of Chicago from the River Walk

The sun looked like a giant nectarine as it rose with soft orange and pink glows lighting up the sky and bouncing off of Lake Michigan creating a magical effect as if rainbow sherbet had melted in the sky. The clouds were hanging around the south side of the sun, creating a colorful gradient in color and texture. As I ran along the lakefront path with a number of other athletic Chicagoans – I thought what a shame it was that I didnât have a camera. But sometimes these moments are better left to the memory rather than a memory card.

The glorious weather continued for me in Chicago, in city # 3 of my Club CarlsonSM Global Travelers itinerary. Even though I only had 48 hours in Chicago,Â  I decided to slow down a bit and focus on the idea that less is more. Yes, in Chicago there are millions of things to do and see, but I decided to focus on eating and photography in Chicago. In addition I threw in some therapeutic runs along the lakeshore (necessary after all of the eating), and was also able to see my friend Lisa who lives in Chicago as well as make a few new friends.

One of the most distinct buildings in the Chicago skyline â people know it as the Aqua building. There are no stuffy right angles here â just flowing, undulating curves! Of course with all of these curves the building had to be designed by a woman â right? The 81 story Aqua building is the tallest building designed by a woman -owned architectural firm and the first skyscraper from Chicagoâs Jeanne Gang, of Studio Gang Architects. Yeah for women! 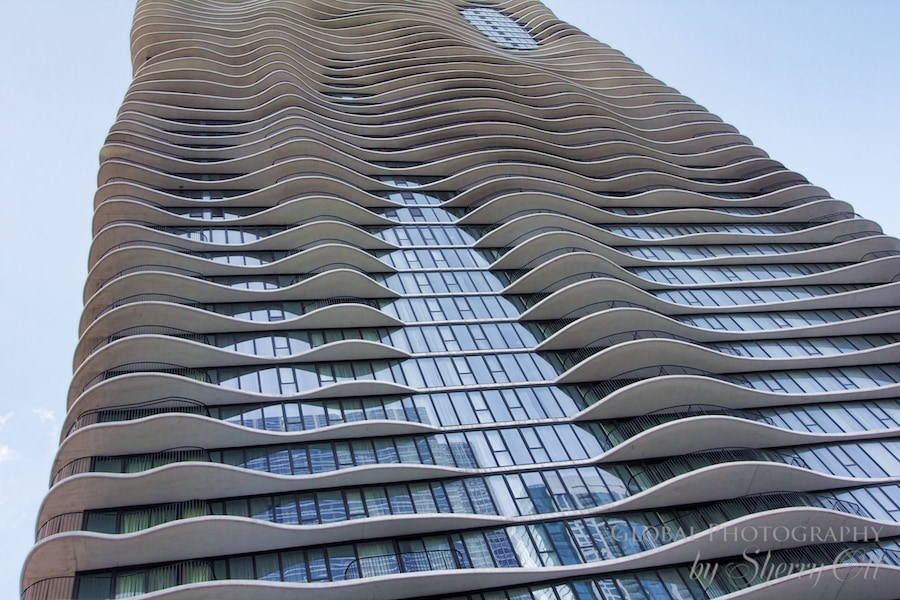 The inside of the Radisson Blu Aqua Hotel was designed to feel welcoming and homey. Designer Jim Hamilton gave a nod to Chicago when he selected design elements that represented Chicagoâs history and feel. The signage around the hotel was made of wood and represented Chicagoâs printing history, and the Filini Restaurant and Bar was held up by steel beams paying homage to Chicagoâs reputation as the birthplace of the skyscraper. The lobby had a warm welcome feel to it with a long modern fireplace and reclaimed Chicago brickwork.

But most of all, I loved the lighting in the hotel. I have a thing for modern and inventive lights â one could say Iâm drawn to them like a moth to a flame â at least my camera is. The in-room design was again very sleek and modern, but I loved the warm feel in the communal spaces that the lighting provided. 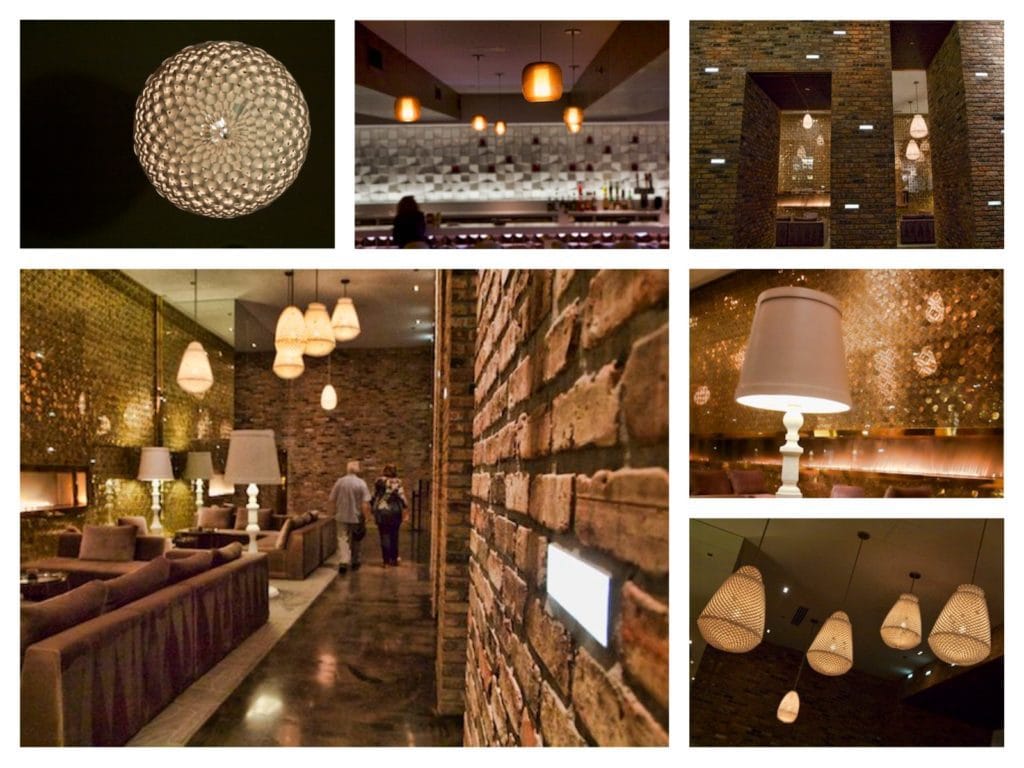 Love the variety and choice of light fixtures at Aqua!

My room had a gorgeous balcony view that wrapped around one of the corners of the building and looked down upon the pool and outdoor running track. I honestly spend a number of hours wrapped up in my robe and slippers simply enjoying the room and the view â a great environment to catch up on writing and photo editing. 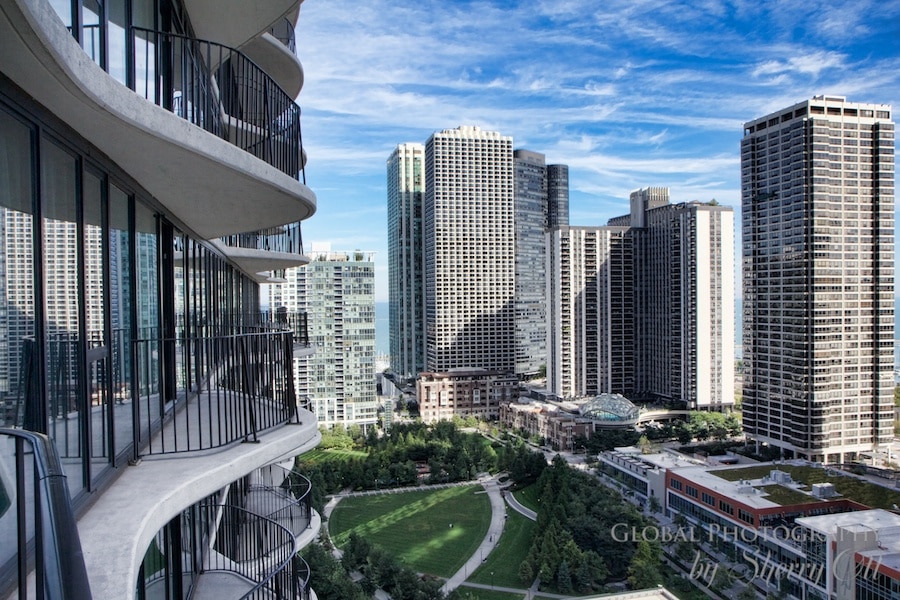 My view from the groovy balcony.

What can you do in 48 Hours in Chicago?

What is now Millennium Park was first conceived in 1997 with a vision of turning the area into a new public space for residents of Chicago. It is one of my absolute favorite parks in the world. I can wander around this park for hours looking at the public art and beautiful architecture and design of the open spaces. And thatâs pretty much exactly what I did.

The Cloud Gate Sculpture (a.k.a The Bean) is probably one of my top 10 things to photograph in the world. The elliptical, mirrored sculpture is a photographerâs dream. You can sit and come up with so many unique ways to photograph it utilizing your manual settings to get creative. My best advice â go at different times of the day – walk around it, lay down, crouch, touch it, and see what great composition you can come up with. 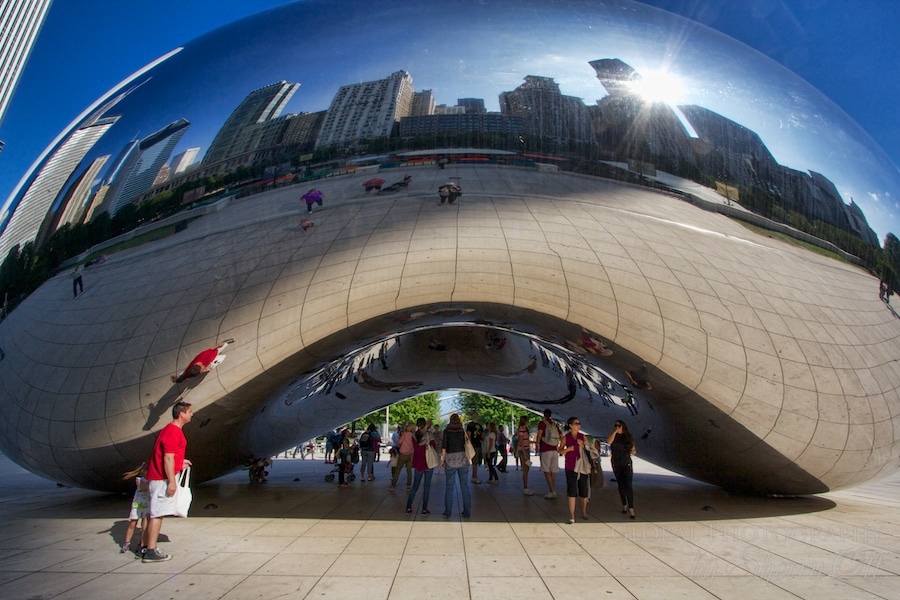 Cloudgate in all of it’s bean shaped glory! 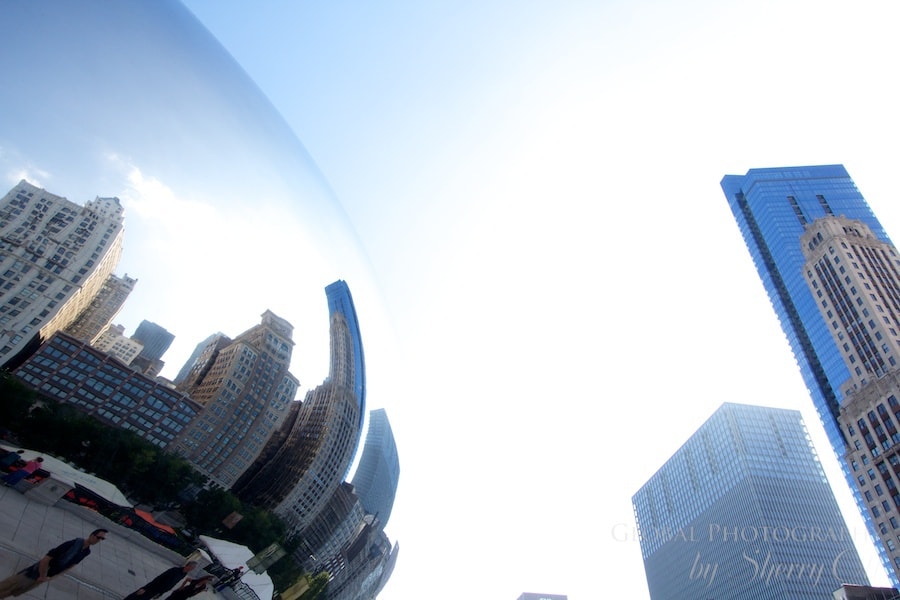 Playing with exposure and light on the bean. 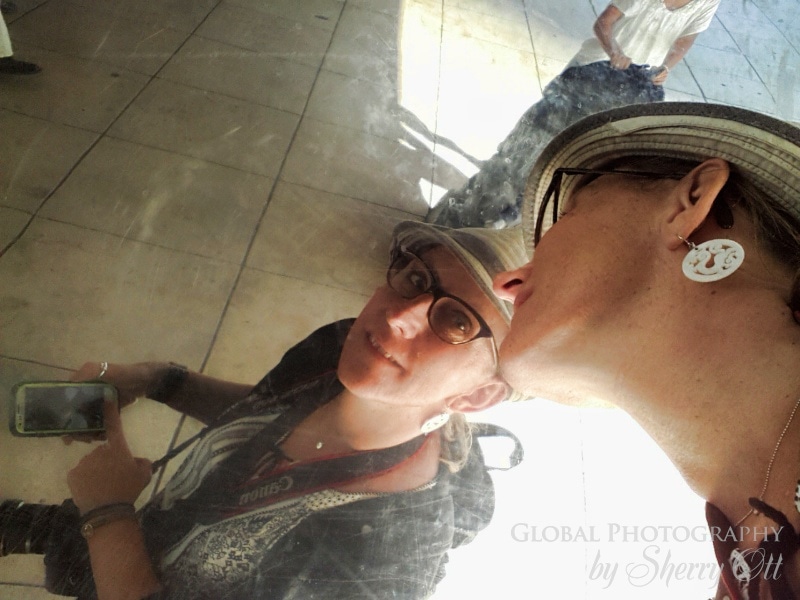 The bean makes it easy to do selfies!

The Crown Fountain is another favorite stop in the park. The fountain consists of two 50-ft glass block towers at each end of a shallow reflecting pool. The towers project video images of faces of Chicagoans which move and even spit out water like the gargoyles on old European architecture. You can walk through the shallow pool and enjoy the reflections and ripples from a photographic perspective. 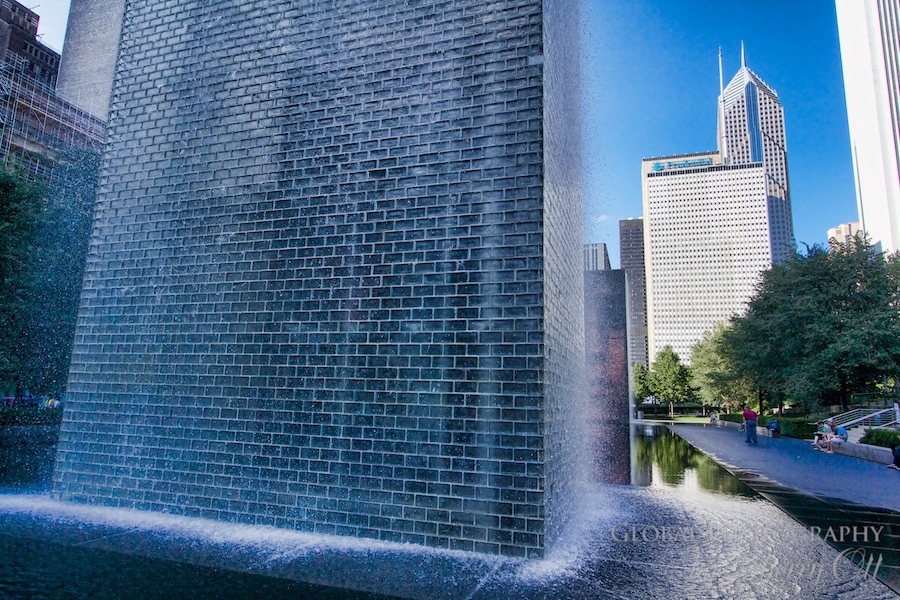 Crown Fountain cooling things down on a hot day. 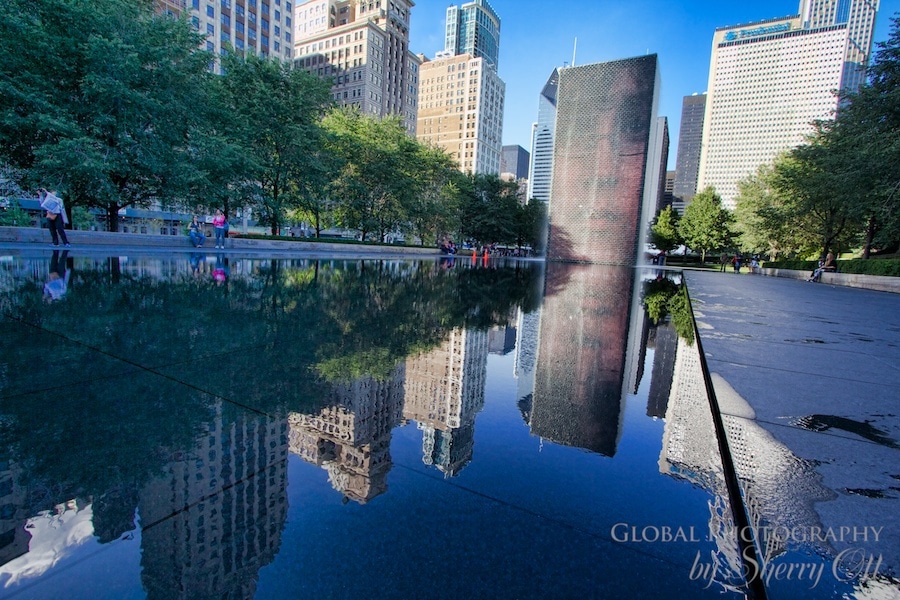 Reflections in the Crown Fountain

I also took the time to visit a little known museum in Chicago that is right under everyoneâs nose â the McCormick Bridgehouse and Chicago River Museum. The Michigan Ave. bridgehouse is a building that thousands of people walk by every day and is one of the most photographed buildings in Chicago â yet I bet you didnât know you could actually go inside! I first learned of the museum from my friend Lisa when she spent a âNight at the Museumâ and I knew that the next time I was in Chicago I wanted to go check it out for myself. 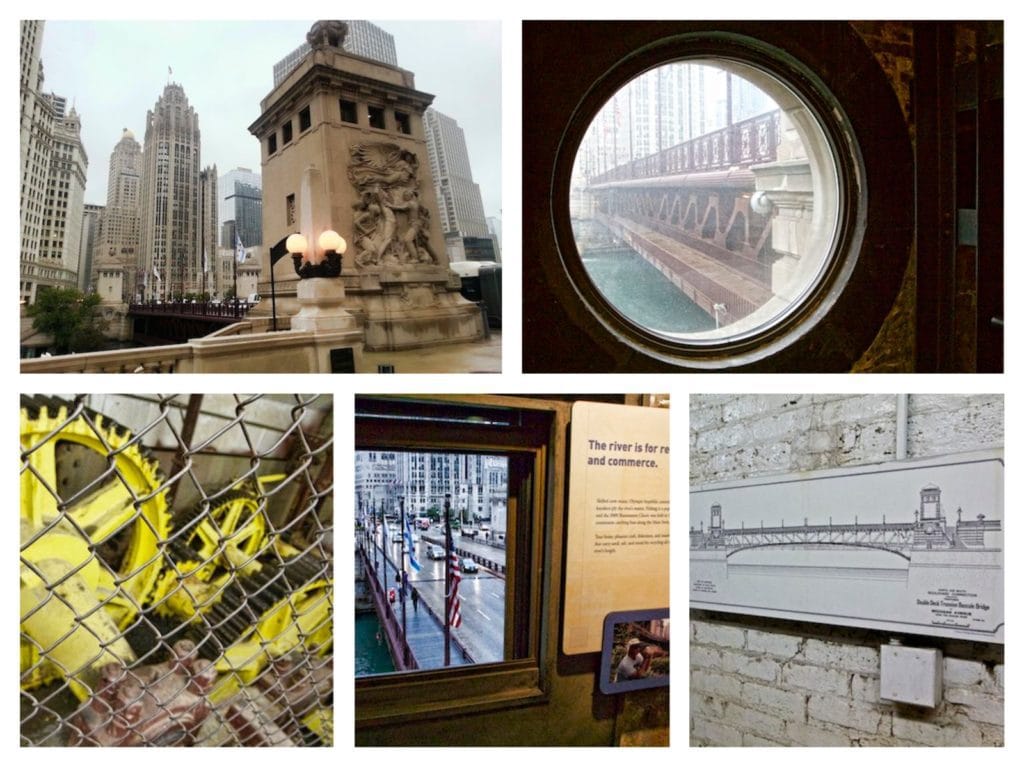 I met the museum director, Ozana, who walked me through the museum and itâs fascinating history. Itâs a chance to learn about the significance of the Chicago River â which has a dirty (literally) history but it is the sole reason why Chicago exists today. The exhibits cover the settling of Chicago, the growth, the creation of the bridges, sewage and pollution issues, and finishes up with a plan for the future to continue to make the River a focal point in Chicagoâs landscape. You can even go down to the ground floor and see the mechanical gears and machinery that lifts the bridge. You can also view the somewhat rare bridge lifts (only 40 a year) from the museum in the fall and spring. It fits any budget too â only $4 and every Sunday itâs free!
More info on the Bridgehouse Museum Website

After the Bridgehouse Museum â I spent some time on the river and along the River Walk. With only 48 hours in Chicago – I had to walk fast! The River Walk is a beautifully manicured path along the river where you can catch a different vantage point of the skyscrapers lining the river as well as stop and enjoy lunch or watch the boats go by. It was created in 2008 and every year more and more gets added to it every year making it a real destination for tourists and locals. 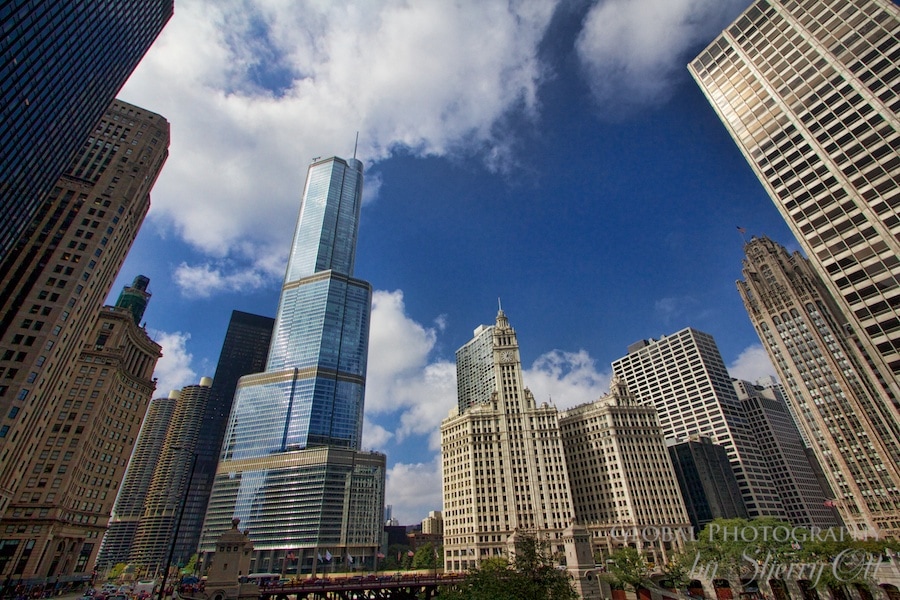 The view from the River Walk always makes the buildings look more spectacular and tall.

Ride the El to the Burbs

I also took some time to get out of the Loop and downtown area and rode the iconic Elevated Train (the El) out to Lincoln Square to meet my friend Lisa for dinner. She is a true ambassador to Chicago and was eager to show me some other neighborhoods with a flavor all their own. We went for sushi and wandered the streets of this German neighborhood where there were lederhosen shops and sausage stores!

Thanks to Andrew the Concierge at Radisson Blu, I did one big splurge in Chicago. I decided that checking out a new restaurant idea was worth the trip to the questionable neighborhood and the dent in my pocket book. My night at the new restaurant and eating concept, El Ideas, was so good that I licked my plate! Really â I did â see for yourself!

The night was incredibly fun and memorable as I spent most of my night back in the open kitchen watching the inner workings of the art and science of gastronomy. You can see and read about my whole experience here – Looking for Ideas in Chicago. 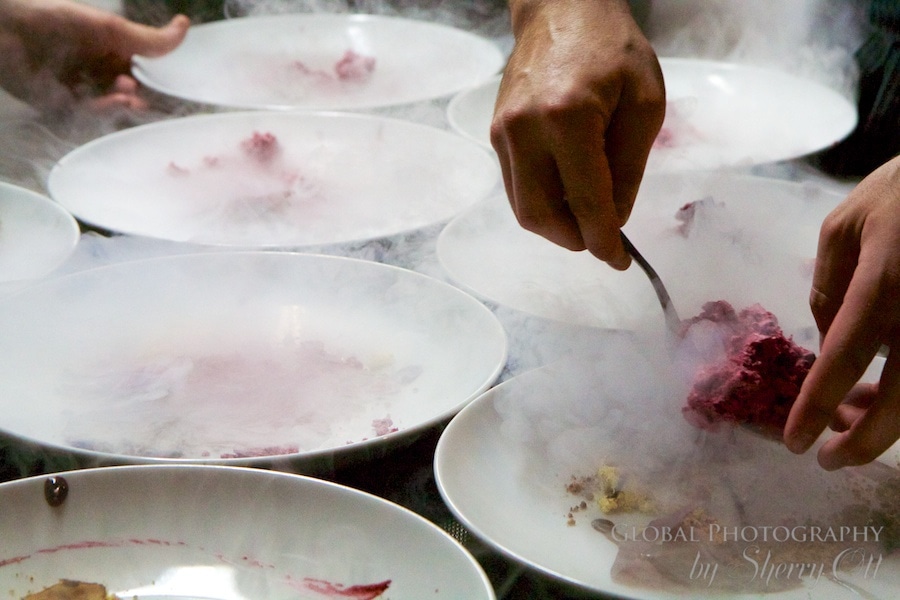 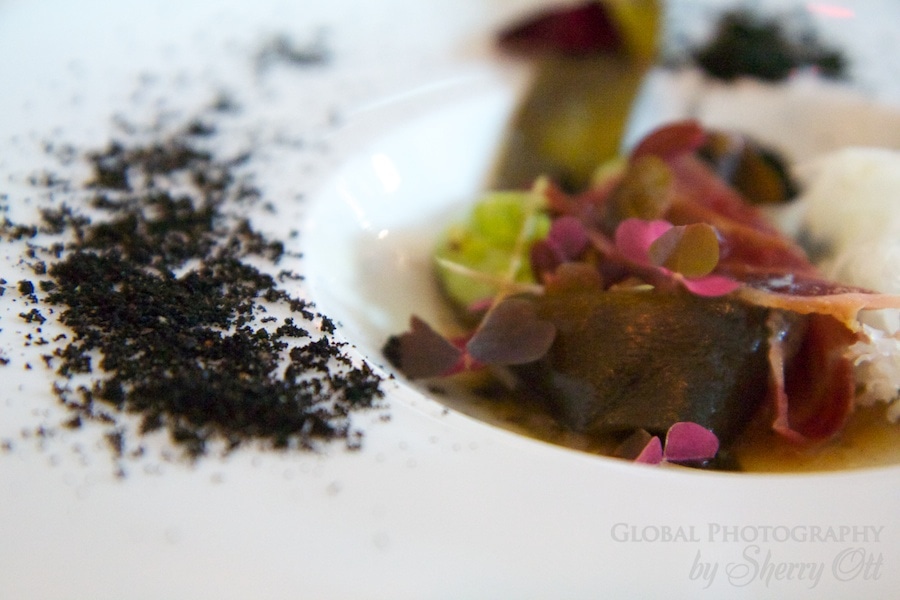 I spent the rest of my time in Chicago eating at food trucks and places where I could conserve my money in order to prepare for my night at El Idea! Here were a few of the places I went: 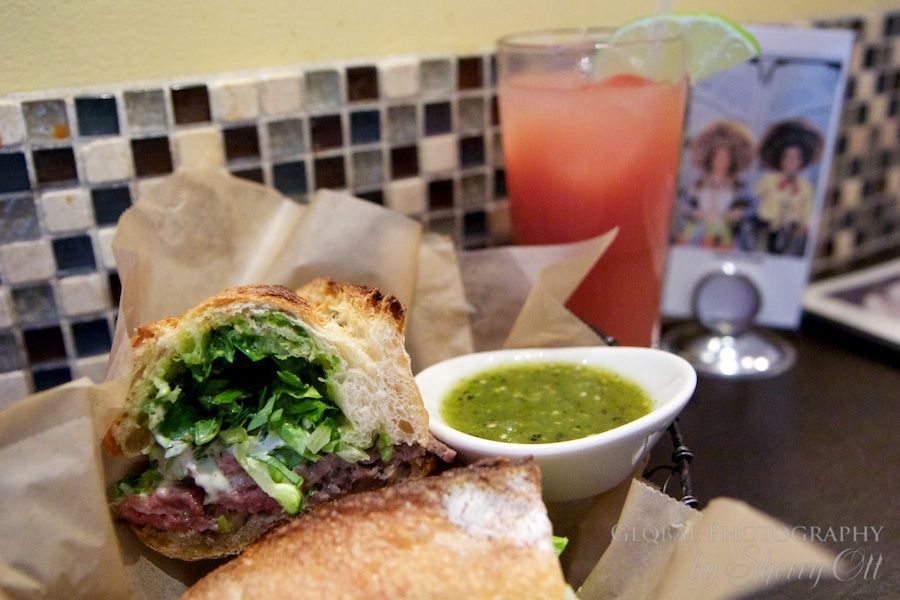 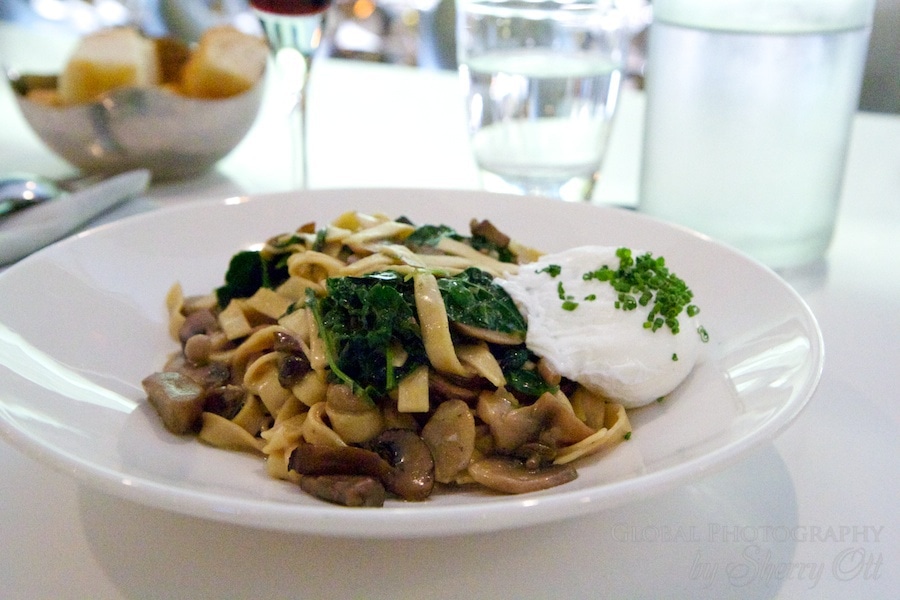 Filini is the modern restaurant at the Radisson Blu Aqua Hotel . I had the Fettuccine – homemade porcini pasta with mixed mushrooms, spicy greens, poached farm egg. 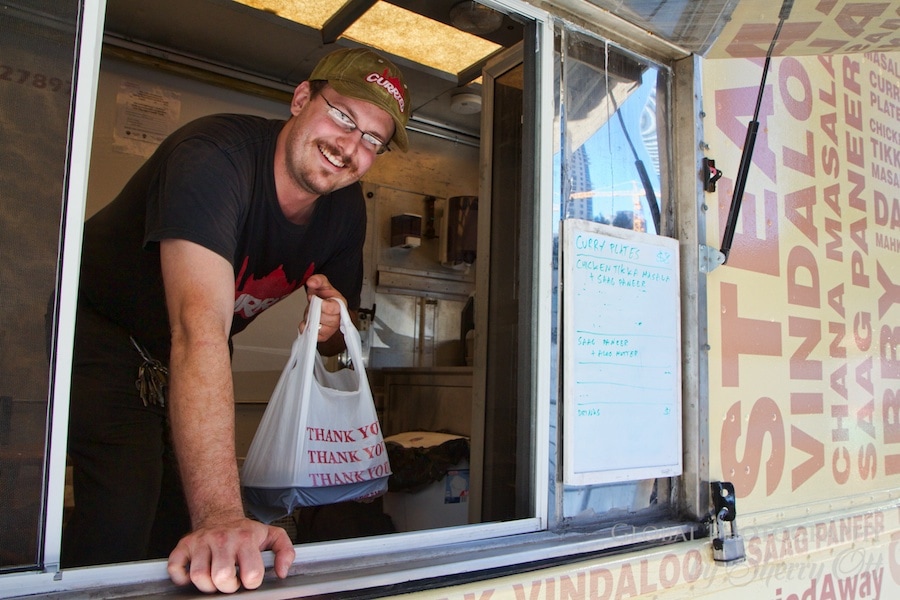 I was pretty excited when I checked the Chicago food truck website and found Curried Away parked right outside my hotel! I took my lunch and headed to the River Walk for a picnic!

Itâs amazing what you can do in 48 hours in Chicago with a little help. A big thanks goes to Andrew the Concierge and Lisa for helping me figure out where to spend my limited time!