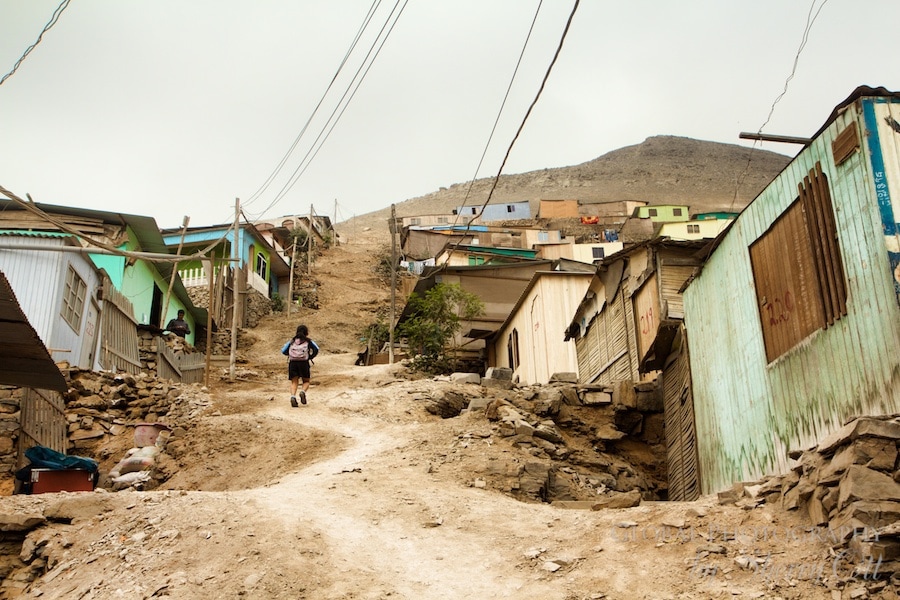 Las Laderas – an impoverished community outside of Lima where we were to build two homes.

The hills of Las Laderas were brown and barren of trees, however they were dotted with little colorful cubes representing simple houses. Josue told me many of these houses built into the hills were filled with single mothers which immediately made my heart sink. The homes were very simple, some made of brick, some of wood, and then many which seemed to be whatever box, wood, and tarp that could be found and somehow stitched together into shelter. This impoverished community is one of the main regions that Project Peru focuses on in helping bring education, homes, and work to people who need it. Many of the children we were staying with at Zapallal Refuge came from homes here in Las Laderas â and thatâs what made this whole connection even stronger for me. I had gotten to know the children at the refuge and now we were going back into their community and understanding where they came from.

Today we would be adding to this neighborhood in the hills of Las Laderas. Megan raised $1800 in fundraising and this was enough to purchase materials and labor for a couple of houses to be built in the Las Laderas hills. Megan and I went with Josue the first day so that he could translate for us and get us settled into our volunteering project. He introduced us to Rosa who was Project Peruâs coordinator for Las Laderas projects. Rosa coordinated all the efforts of Project Peru in Las Laderas including being involved in the process of determining who receives new homes. As we walked around the dusty, steep hills with her it felt as if I were walking with a community leader. Everyone knew Rosa and understood how she could be a game changer for them. And simply by us walking around with her we became strangely important too. 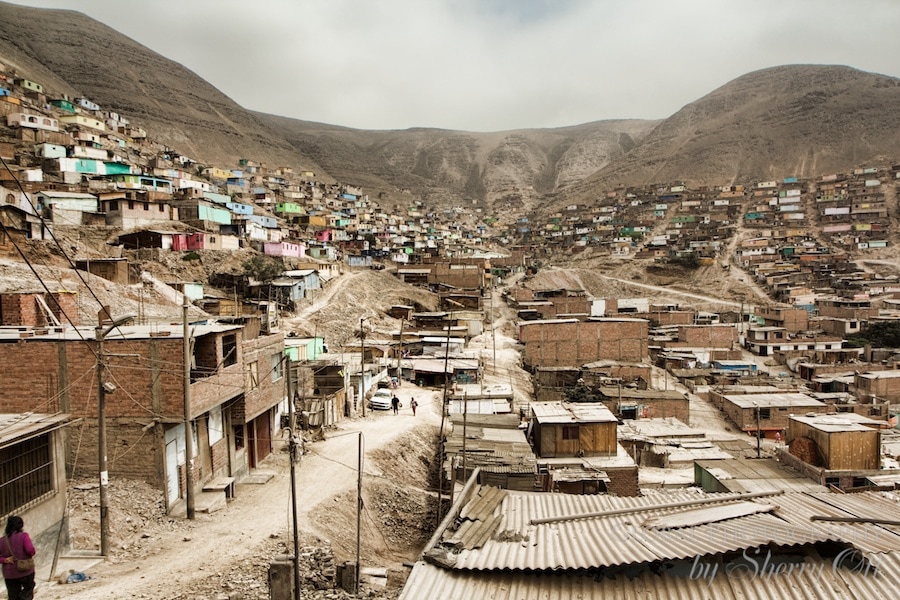 Looking out over the dusty hills of Las Laderas

However Rosa was not one to abuse the leadership she had. Her love of the area and the people were very evident as she led us through all of the different schools, soup kitchens, and projects in which Project Peru has taken part over the years. She told us stories of the children we had come to know at Zapallal and how/why they were there. It is rare that you meet a person like Rosa and an organization like Project Peru. Their work is their life and they have an indescribable drive to help others and make the community a better place. Rosa was someone to look up to, someone who took caring, compassion, and pride in her work to a whole new level.

Rosaâs son, Michel, was a builder and in his spare time he helped construct houses in Las Laderas. Michel was a big muscular man with a welcoming smile. He could hammer a nail in with 2 strokes effortlessly. He spoke no English, but he was going to be our âbossâ for the next few days. Ronald was also a local guy who was part of his work crew â so that made 4 of us to build a couple of houses – the work crew seemed pretty scarce, but then again so were the houses. 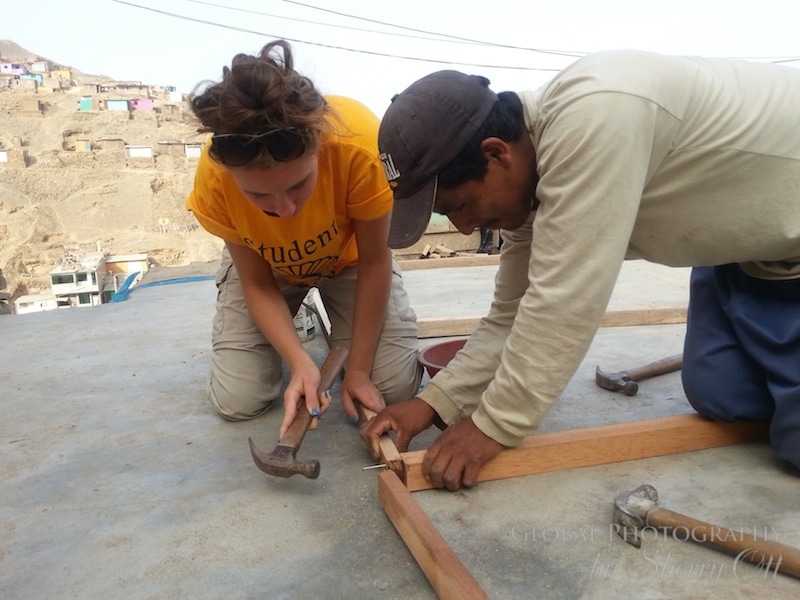 Megan working with Ronald on building the frame of the home

Michel first made sure that we knew the most important vocabulary â hammer and nails – martillo and clavo. Two Spanish vocabulary words I will never forget. Soon we were hammering away at the wood slabs for the walls learning bits of Spanish vocabulary along the way. Megan and I both perked up with our new hammering duties, excited to be doing something tangible and making progress on creating something. Michel and Ronald continued to work on the wooden frames for the 4 walls and Megan and I swung hammers all afternoon. The house was simple â a concrete slab that had been poured earlier for the foundation, and we would construct and put up 4 walls, and a corrugated metal roof with a slight pitch. The walls had a front and back door and one window. No insulation, no plumbing, no electricity. Simple. But it was a huge upgrade from what was previously there.

The new owner of the house was a single mother with 2 young children. She would hover around the work site with her young son affixed to her back with a blanket the Peruvian way. She kindly brought us freshly squeezed juice, and watched in anticipation wanting to be involved but also not wanting to get in our way. Her 5-year-old daughter, Gina, would flit around trying to keep the curious kitten out of our way. Both Gina and her motherâs excitement was palpable, which made the dayâs work even more rewarding. 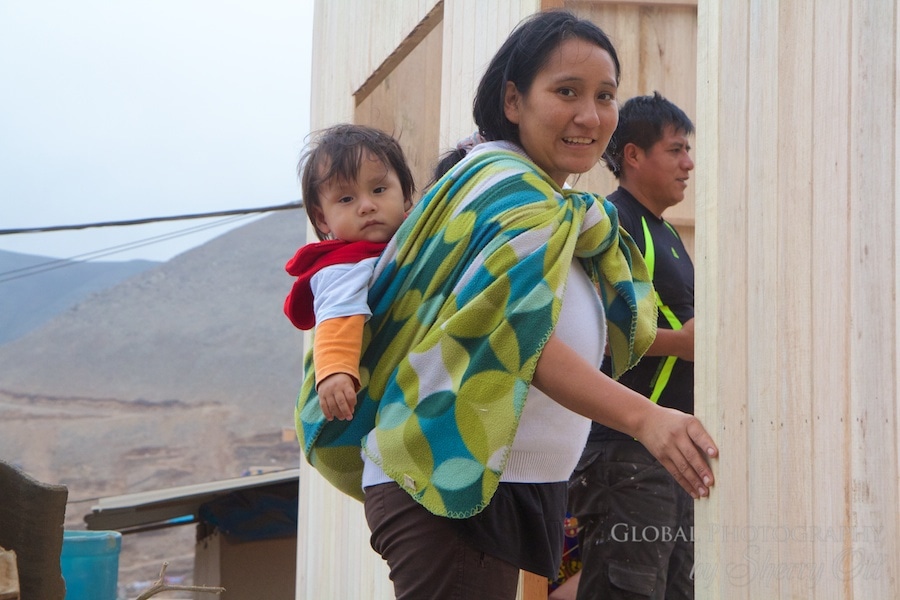 The owners of the new home. Her excitement was contagious! 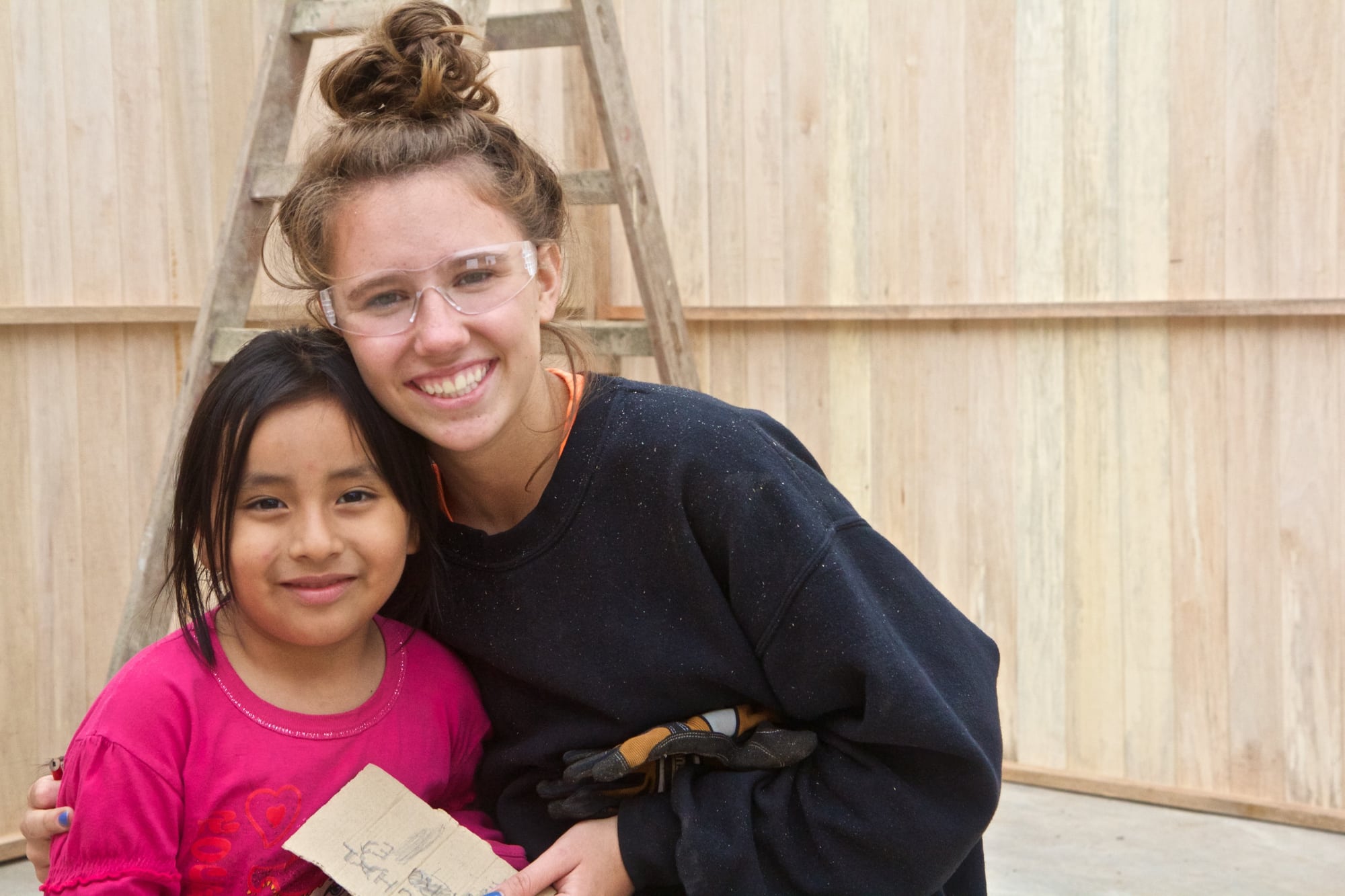 At the end of the first day we had developed a great rapport (via charades) with Michel and Ronald. We had finished a couple of walls, and started the frames on the next two walls. I really felt like a part of a team â a fun team. Megan was practicing her Spanish more and more with Michelâs help and Michel seemed to really take a liking to Megan teaching her hammering techniques and new Spanish words.

The second day Rosa took us deeper into Las Laderas and we visited a few more projects in the area and met more locals and then made our way up the steep hill to meet Michel and Ronald for finishing the walls. We focused on finishing the 2 walls with the door and window cut. After lunch it was time to get the walls up and together on the concrete foundation. I had no idea how 4 people were going to go about this with simple hammer and nails â but Michel conducted as if we were a symphony directing us to stand there, push here, hammer rapido, while we all propped up the walls. At one point I was hold up the front wall myself hoping that a big gust of wind wasnât going to blow it out of my hands and down the hillside!

Megan entertained everyone with her new ability to roll her râs â something that she miraculously picked up one night at the Project Peru refuge we were staying at. Michel would try to give her tongue twisters that would help her roll her râs – however she would also at times spontaneously combust and start rolling râs out of the blue. Iâm pretty sure any person passing by thought she was loco. 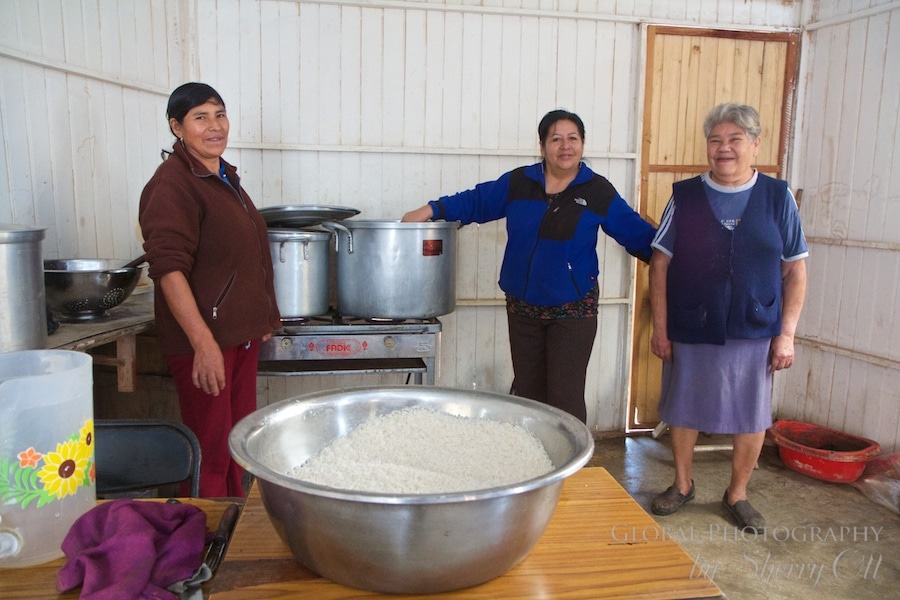 Eating at one of the soup kitchens in the community. Staffed by local women it serves as a cafeteria of sorts for a bunch of houses.

We remained in the community all day and went to lunch with Michel, Rrrrrosa, and Rrrrronald at the local soup kitchen where they fed the lot of us without ever asking for money. They knew we were working in the community helping with the homes and we were treated like dignitaries. As we were all giddy on a sugar high of Inca Kola, we joked around about the World Cup and the upcoming game in which the US would be playing. It never ceases to amaze me how much fun I can have with people even though I canât speak their language. People always find a way to communicate â where there is a will there is a way.

We returned on day three focused to put the finishing touches on our first house and start the foundation of the 2nd house. We knew that we wouldnât be able to finish the 2nd house during our stay, but it was great to get to experience starting a 2nd one and getting it off to a good start. We met the owner of the 2nd house â a young mother who brought her young baby out with her to meet us. She was so appreciative and helpful â at one point she placed the napping baby in the wheelbarrow and dug in and started helping us build the rock wall for the foundation. This is the day when we learned just how much of a struggle it is to build a home in Las Laderas â manually digging out a space in a rocky, dirt hill is not easy. This required the work of a sledge hammer and picks â and lots of muscles that Megan, nor I, really had! 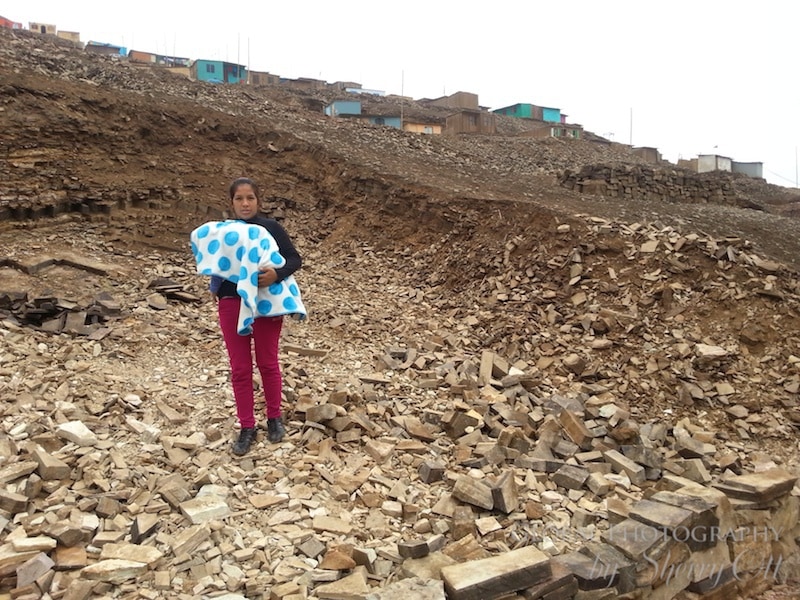 The mother and her young child – the owner of house #2. She stands in the area where the house will go – after we clear out all of these stones and build a foundation of course! 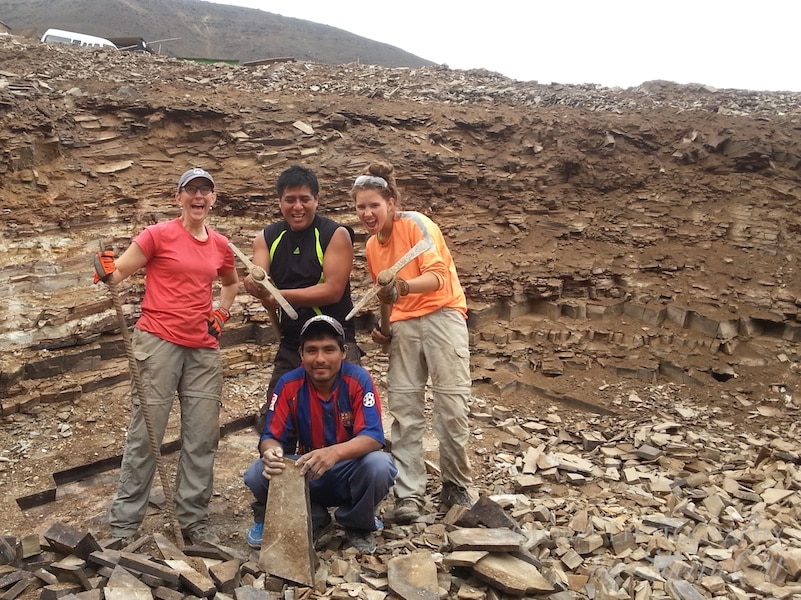 Michel, Megan, Ronald, and me at our foundation site of the 2nd home. We all got along great – despite the language barriers!

At lunchtime we went back to the first house to hang the door and celebrate itâs completion when we were treated with a surprise. Ginaâs mother had cleaned off the old construction table we were using for hammering and sawing, put a lovely lace table cloth on it, and surrounded it with 4 chairs. She had made us a celebration lunch that moved me to the core. She brought out Meganâs favorite meal â pollo e fritas and a big bottle of Inka Kola for us all to share. Gina was so excited to be serving us in her new home and I was overwhelmed with gratitude for such a nice gesture. We were supposed to be helping them â and the tables had turned â a table that was dressed up in a lovely lace tablecloth. Our lunch was the perfect way to christen this new home we were a part of. 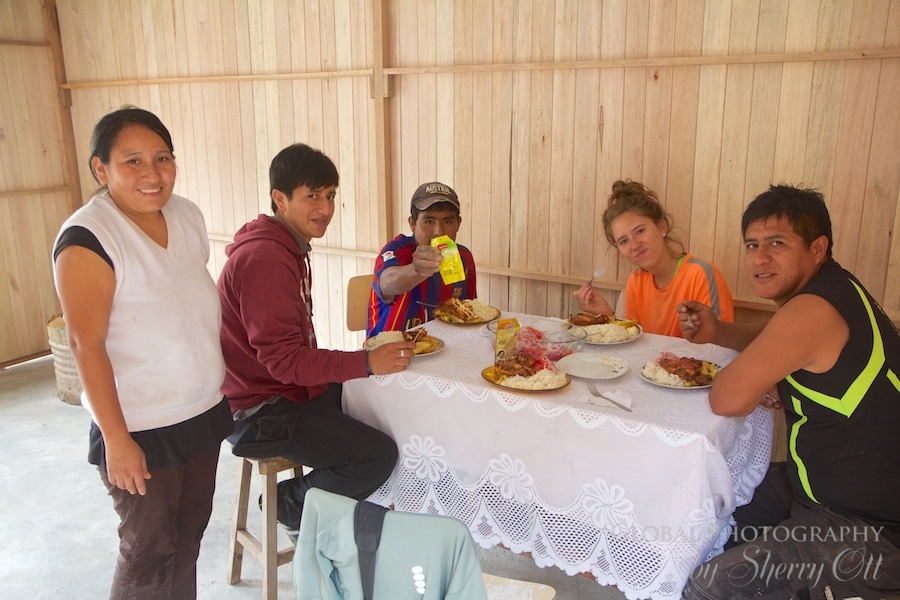 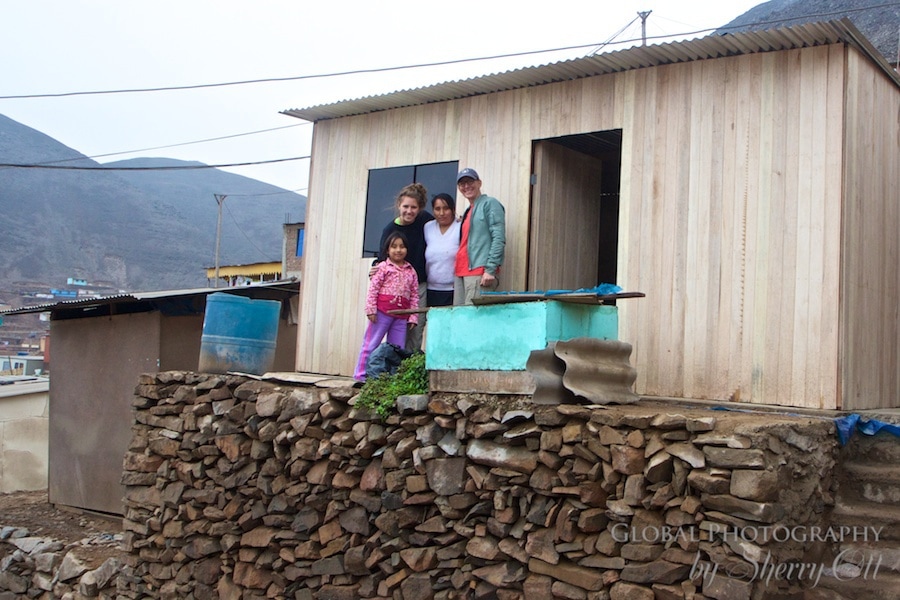 The first home is complete! Never been so proud of creating something!

Iâve done a lot of volunteering around the world, however I really appreciate the tangible aspect of building houses. It makes me happy to think that we left something useful there â something I know is appreciated, used, and most of all â needed. The whole Project Peru experience was a blessing â like we found this hidden gem in Lima â a place that is often overlooked when it comes to volunteering. The chance to see a bunch of different projects, meet and help out the kids, and build homes was a great combination of volunteering activities. The day Megan and I left was harder than I had imagined it would be. In that short time I had grown attached to the kids and the projects. And as we were showered in hugs and goodbyes, pulling away in the car was strangely sad. But I absolutely know that these kids were going to be just fine. They have a group of loving people supporting them and a future ahead of them.

Learn more about Project Peru, volunteering in Lima Peru,Â  and the many, many great things they are doing for this community here â projectperu.org.uk
If you feel like donating, please consider giving to the Intrepid Foundation as they match donations!
Donate here www.theintrepidfoundation.org

View all of the pictures of the construction over the week: