All the air vents pointed towards her blowing full blast, however she was still hot and visibly unsettled as we got about 10 minutes into the first flight. I can feel that familiar feeling of âOh shitâ what can I do to try to make this better. How can I be supportive? How can I ensure that she wonât hate me for taking her on this plane? Her face is red and flushed. I get out the barf bag and show her where it is, and she tells me the Dramamine she took was expired, but her mom thought it would be ok. Her mom is a nurse who Iâm now cursing in my head. We still have another flight after this, and then a long car ride; I realize itâs going to be a long day even though this is a relatively short distance to fly from Nebraska to Belize. Why do plane rides have to be so hard on these niece trips?

Allie was never excited about flying. In fact one of her criteria for this Niece Project tripÂ is that we didnât fly far. At the time I didnât understand, but after this incident â I was beginning to understand her fear of flying.

Allie made it through the next flights in better condition and I stopped worrying a bit. Yet I did always keep a barf bag within my reach just in case. I let Allie sit in the front seat in a hope to stave off motion sickness when our guide Mike picked us up and we started on the 3 hour drive to the Belize jungle. Mike pointed out the signs for the Belize Zoo and he said that even though the zoo was closing shortly, if we wanted to go we could. I looked at Allie to see if she gave it the nod, and she didnât really give me any indication what she wanted to do.

A few weeks prior I texted Allie for her 17th birthday to wish her happy birthday and see what she was doing for her special day. She answered me back â âIâm at the zoo!â At the time I thought it was odd that sheâd be spending her 17th birthday at the Omaha Zoo, but then I remember back to when we were doing Belize trip planning and looking through the Adventure Life Belize Itineraries . At that time she had expressed interest in seeing animals and visiting the zoo in Belize too. In fact animals seemed like the one thing that she really showed excitement about at all.

So, thinking back on her interest in it, I made an executive decision and told Mike to stop.

The Best Little Zoo in the World

The first animal we encountered swooped around us in a stealthy fashion, barely detectible in flight – mosquitos! We lathered up with repellent before going in upon Mikeâs advice else we may have been eaten alive. We went on the abbreviated tour seeing colorful birds, toucans, vultures, parakeets, and parrots up close. We also saw monkeys swinging and flying from trees, and were introduced to Belizeâs national animal – the tapir. A 300 to 500 pound forest dweller referred to as a âmountain cowâ. I watched Allieâs expression, she was clearly excited about seeing new animals.

Allie checking out the Tapir

This was a great, albeit quick, introduction into Belizeâs wildlife and jungle species. The rest of the trip when people referred to various animals, we already knew what they were. Totally worth a stop, even if you only have an hour!

I was skeptical when we decided to go visit a butterfly âfarmâ in the jungle. I thought it was going to be pretty simple and more gimmick than anything. But with a cloudy, rainy day in the jungle it seemed like the perfect rainy day thing to do. And when we stepped through the double set of doors into the Green Hills Butterfly compound I was in shock and amazement.

They were all over â colorfully flitting around landing on twigs, leaves, and us. I felt like I had walked into the pages of a fairy tale, a princess wandering around a magical forest of butterflies. Our guide led us through the butterfly life cycle from egg, to caterpillar, to pupae, to butterfly. Sure, I probably learned this in 5th grade at one time, but it had since been moved to the far reaches of my brain behind more valuable stuff like how to make gin and tonics. But it all came back pretty quickly as they physically showed us each stage and explained how they bred butterflies; which is a very hands on, intensive process.

Allie getting a close up look

Most of all, I enjoyed watching Allie walk around the butterfly compound in awe, asking me to take pictures; this was one type of flying she clearly loved.

You could hear a weird buzz in the air in Belize. A mix between bird and giant bumblebee, they would zip through the air, more hovering than flying. They were like fighter pilots at times; dive-bombing my ear so close that my hair would blow in their wake. And then sometimes they were just curious, hovering around you, staring, trying to figure out if you were sweet or not. At these curious times they reminded me of Tinkerbell, and Iâm now convinced that she was crafted after a humming bird. Iâve never seen so many humming birds in my life, nor have I been so close to them.

But it was easy to get close to them as most establishments around the Belize jungle had feeders out and wherever there were feeders, there were many humming birds. Watching them mesmerized me. The feeders full of sugar water were like a crack house for humming birds. Once you focused in on a feeder and watched for a while it was easy to see which bird was the dominant one. Defending the feeder, fending everyone else off, and not letting others drink; a bully bird. Eventually though the others would gang up on the bully and take over for a bit. And sometimes there were quite the turf battles for the sugar crack.

Iâm not sure if it was all of the animals we watched flying around us, or it was just that the initial travel jitters were gone, but Allieâs flight home was much more smooth. No flushed face, no hot flashes, no motion sickness â even in the smallest of planes! I can only hope that Allieâs annoyance and fear of flying diminished a little bit on this trip. And next time she gets the opportunity to go out of the country â sheâll fly even further! 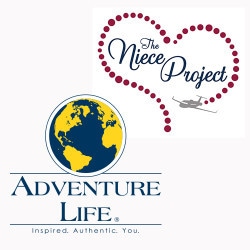 Want to learn more about the Niece Project or start your own?

Niece Project Series
Back to Blog

One Response to "Taking Flight in Belize"