The waitress brings out my pizza straight from the wood oven. The smell of the bread and the wood from the oven makes me salivate. Itâs thin, crispy and on an individual little plate just waiting for me to dig in. The waitress sets down a knife and a fork and says âBuon appetite!â I take one look at my plate and the excitement I initially felt about my Italian pizza quickly morphs into panic. Unlike pizza in America, this pizza isnât cut at all, itâs simply a round, crispy pizza served on a normal size plate.

I look at the knife and fork, and I look around me at the Italians eating the pizza and realize I have to cut this myself; thereâs no American pre-cut slices here. But where does one start when you have an uncut pizza spilling over a normal size plate; do you do it the American way and cut it like a pie, or do you use your knife and fork and cut it as if youâd cut up a steak in little pieces that you eat with your fork? I simply wanted to get it in my mouth as quick as possible; not sit and cut it up into bite size pieces! As an outsider to this culture, I immediately feel self-conscience about trying to cut my pizza. This is the one thing in Italy that has always baffled me â how do you eat pizza like a local in Italy? 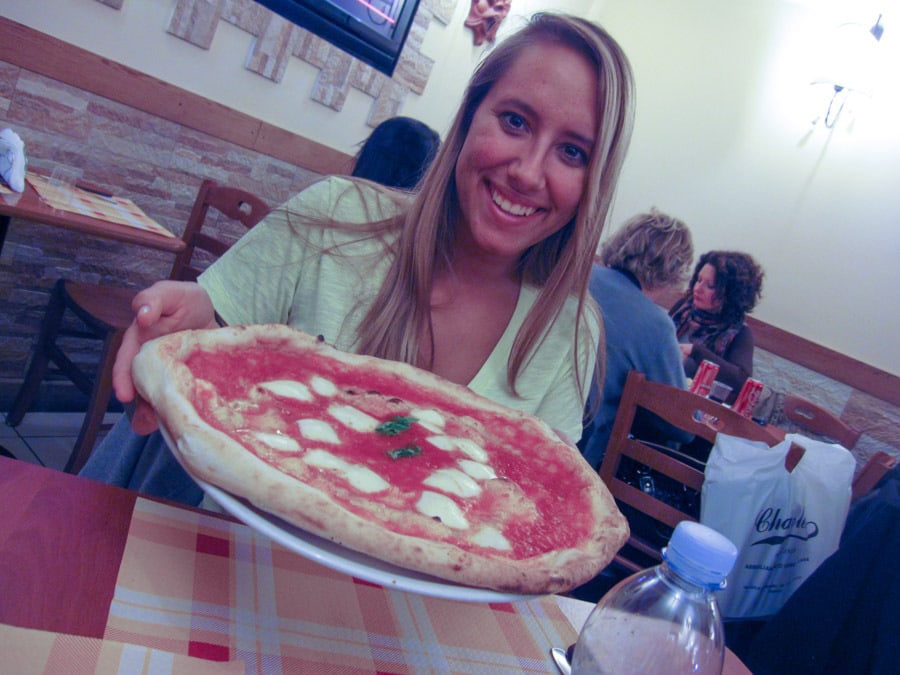 They bring you a beautiful looking pie…now what? 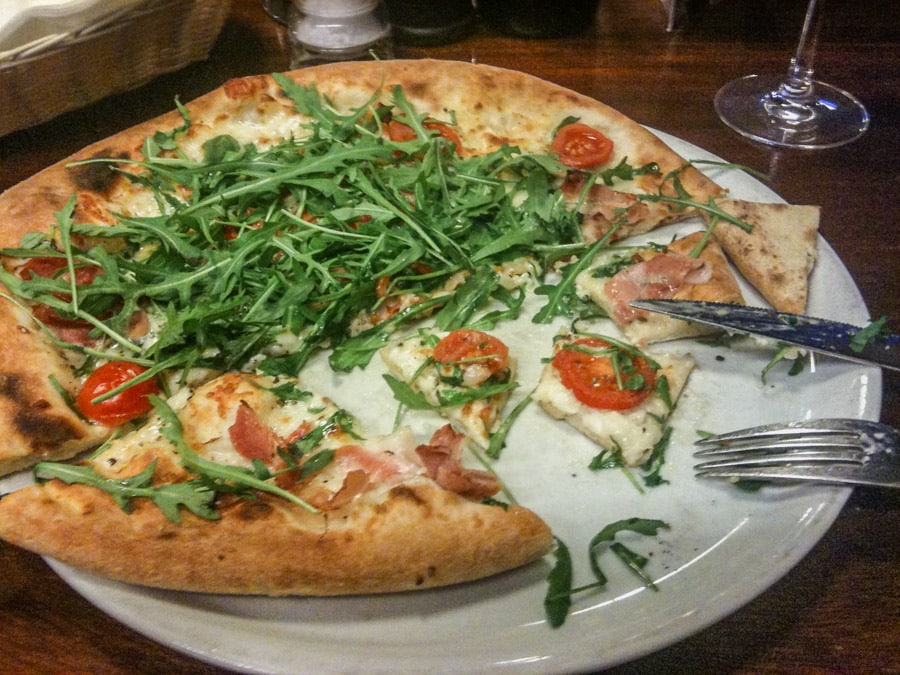 My best attempt…slice like a piece of steak into small pieces?

After many various attempts of trying to slice my pizza to appear like a local, I finally met someone that could help. Dario is the husband of my friend and fellow travel blogger, Katrina from www.tourabsurd.com. Dario is from the Naples area (ahem â the birthplace of pizza) originally so I knew I had found the right person to ask about how to eat pizza the âcorrectâ way.

A Local’s Take On the Best Pizza in Naples

In addition to solving this dilemma, I would also be able to utilize Dario to take Bethany and me to the best, local pizza joint in Naples. When we first met Dario and Katrina in Rome I had told them about my quest to go to eat the best pizza in Naples AND to learn how to eat it properly. They immediately accepted the challenge and told us to make sure we didnât order pizza in Rome as it would be a waste of time. They were insistent that the only pizza worth having was a Napoli pizza.

Bethany took this advice to heart even though the Amalfi Coast and Naples was the last stop on our trip. Every day when we sat down at a restaurant to eat, Iâd try to temp her with ordering pizza and she would refuse based on Darioâs instructions. I was quite impressed with her resolve; I on the other hand didnât really have a great of resolve.

Dario knew right away where he wanted to take us in Naples for a slice â Pizzeria Antonio e Gigi Sorbillo. â a local pizzeria which happened to be very close to the place where all of the tourists went and waited in line for hours. There are multiple restaurants called Sorbillo along Via dei Tribunali; this is NOT the one with lines of camera toting tourists, but a instead a small gathering of locals waiting for a seat. (Update 2017: note is has become more popular in recent years and apparently there are frequently lines now!)Â  It looks like this:

Bethany and Dario waiting outside for a table

Bethany and me meeting the pizza makers

However, Antiono e Gigi Sorbilloâs lack of line didnât mean that it wasnât good; the place was a constant buzz of activity with the wood oven in the front manned by a few big Italian men full of smiles and the back was packed full of people speaking Italian.

Going to Naples to Eat Pizza? Hereâs More Things You Need to Know!

The Only Thing Italians Consider ‘Pizza’

When we sat down I asked Dario what we should order and he said, âThereâs really only one thing to order. Pizza margherita â itâs the only thing we really consider pizza.â He went on to talk about how the âless is moreâ theory allowed you to simply taste the homemade sauce and enjoy the taste of the crispy crust. We decided to take Darioâs advice and we ordered 4 margherita pizzas. 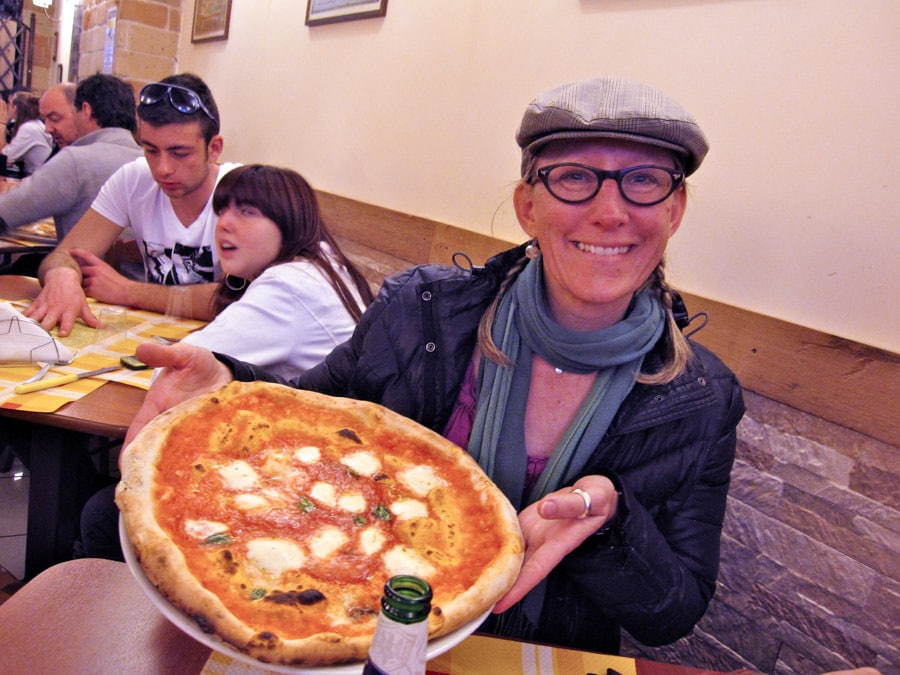 Me and my margherita pie…the one and only…

Soon we had a table full of the best âpiesâ Napoli had to offer and I could hardly wait to dig in. But wait…first I must learn how to eat the pie properly! Dario and Katrina nicely demonstrated for me and to my surprise it was more like the American way of eating pizza than I thought! Watch below and you can also learn how to eat pizza like an Italian.

The pizza was divine, and the sauce was perfect. It tasted as if they went out and picked the tomatoes 5 minutes earlier and put them on my pie.

Now you know the best place to eat pizza in Naples AND you can look like a local eating it! Go forth and eat! 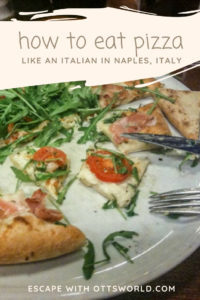 Where to Eat Pizza Like An Italian in Naples

41 Responses to "How to Eat Pizza Like an Italian"