New Perspectives in the Sacred Valley 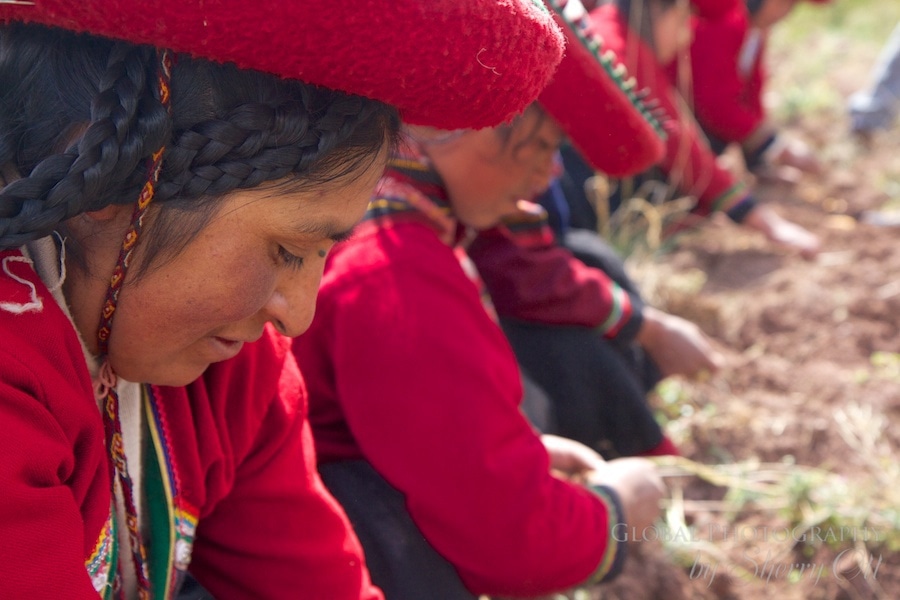 Getting a close up view of life in the Sacred Valley

The man with the wooden flute plays a joyful high-pitched tune; the same few bars of notes over and over again. He is dressed in multi-color clothes, a warm woolen hat, and is accompanied by another man beating out the time on his little drum. The gro

We simply follow the music as if he was the Pied Piper mesmerized by the tune and the sites around us. Luckily we donât have the same ending as the fairy tale; we are simply heading to the fields to gather potatoes with the locals of this village community in the Chinchero District near Cusco. Potatoes are a staple in this part of the world and we are here to get more in-depth into the culture of the Sacred Valley.

Local Experiences in the Sacred Valley

We get to do what few visitors to Cusco ever do â go out and really see and interact with the locals in this region.

Normally in Cusco communication with locals is mainly commerce based. The conversation is one way â they have something youâd like to buy â a deal is made and very little true interaction or learning happens. Sure, you smile, laugh, and have a brief interaction as you exchange money and you may think that youâve made some local connection â but you really havenât.

However, as part of our Peru Intrepid trip, we are now able to take this local experience to the next level and actually interact and have two way communication. And this is exactly why I love to take my nieces on Intrepid tours like this â it takes you a step deeper into a country. 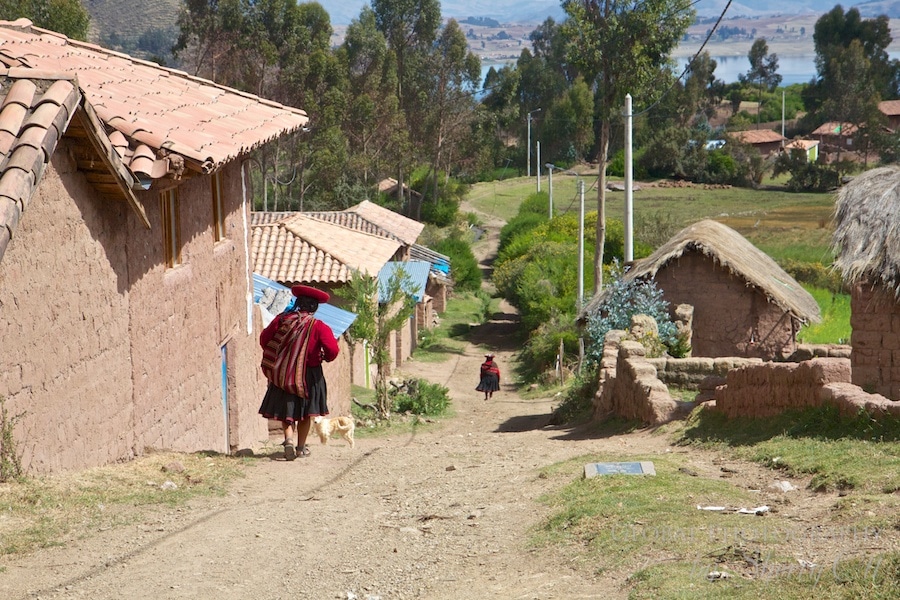 Weâve arrived in the little community village about 90 minutes outside of Cusco on our way to Ollantaytambo in the Sacred Valley. We were to spend a half-day there interacting with the locals and learning more about village life. The air was crisp and cool, but the sun beat down on us requiring a good layer of sunscreen.

As soon as we arrived we were welcomed with a flower lei placed around our necks by a group of women dressed in their colorful red felt hats and clothes. They seemed to have layers and layers of clothes upon them, not to mention children strapped to their backs with heavy blankets in the traditional Peruvian way.

After a short introduction in the community center of the village, we were off to the fields to get dirty and learn about the villageâs lifeline â potatoes. 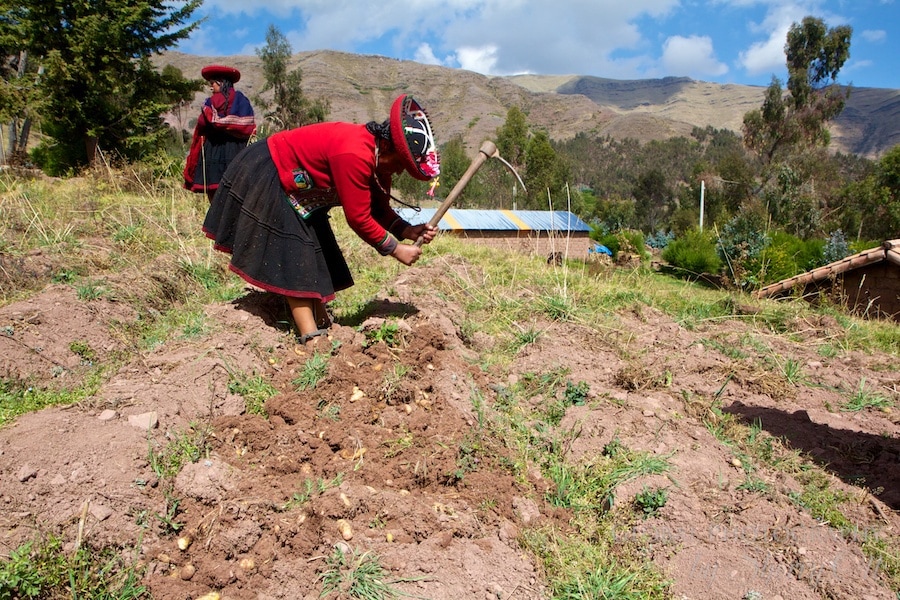 Working in the fields is a daily chore

Hands On Experiences in the Sacred Valley

No one was there to lecture us â this day was all about participation. Soon, I found myself crouched down picking up potatoes and throwing them into a pile on the tarp.

Childhood memories came rushing back to me as this used to be how I spent my summer when I was Meganâs age – working in the garden doing chores such as digging potatoes.

After Megan had her fill of potatoes, she went off and started playing with a few of the kids pushing rocks around making vroom vroom car noises, and playing catch with mounds of dirt and rocks. She remarked at how easily they were entertained by the stuff around them â quite a different experience than her nanny work in Minnesota where a constant barrage of stuff is needed to entertain kids.

As I watched Megan play with the two kids in the dirt field I wondered if kids in the US today have any idea how to simply entertain themselves in nature anymore. I made mud pies with my friends in the summer, they now probably have an app for that. And yes, I feel old by simply typing those last sentences.

Learning to Use a Manta Carrying Cloth

When it comes to raising kids America and Peru look at things quite differently. You canât come to Peru and not be entertained and amazed at how the mothers carry kids of all ages on their backs with a heavy blanket called a Manta.Â  It’s a traditional Peruvian carrying cloth usually used to carry a variety of items like food, firewood, and children.Â  The kids go everywhere with them like a kangaroo and a pouch.

I watched as many of the local women dug up potatoes with the children perched on their backs all snug in their cocoon Manta. The beauty of this is that it keeps the mothers really mobile and their hands free as opposed to pushing a stroller – which would never work in a hands-on community like this.

Megan had been also marveling at this unusual way to carry and keep track of kids so I told her we should see if she can carry one of the local kids on her back like they do. She thought it sounded cool and smiled a âyes lets try itâ message to me.

This is what I love about all of my niece trips so far â they jump into things, they are bold. I mimed the question to the local woman next to me and soon Megan was surrounded by local women strapping a kid to her back!

The local women were tickled with this turn of events. They had big broad smiles â a young American girl carrying a Peruvian boy the local way. And the beauty was that the local women didnât really seem to care that a stranger had their child perched precariously on her back hiking around the village â there were no doting mothers in this village for sure! 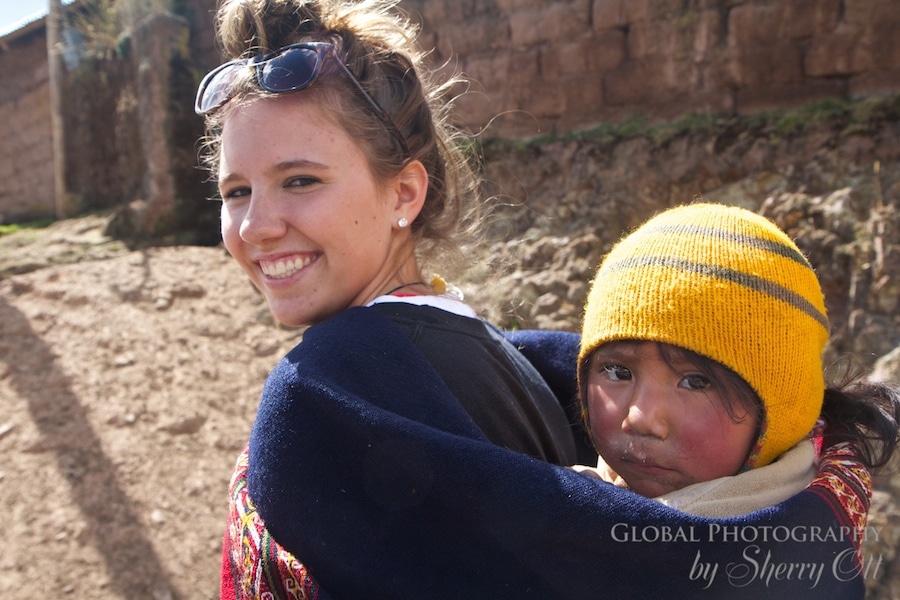 Megan learns how to care for kids the Peruvian way!

After gathering a large tarp full of potatoes for lunch, we were off to have some fun â a little friendly football match was in order. While the World Cup enthralled everyone around the globe, we were going to have our own World Cup match between the tourists and the locals.

The Pied Piper once again started his flute and we all followed him to the football field in the little village â complete with donkeys. I wondered if the flute was required to get us to move â but I enjoyed the tune, so fell into step. Megan with her new little boy in tow was climbing up and down ridges and the boy bounced merrily along without a concern. 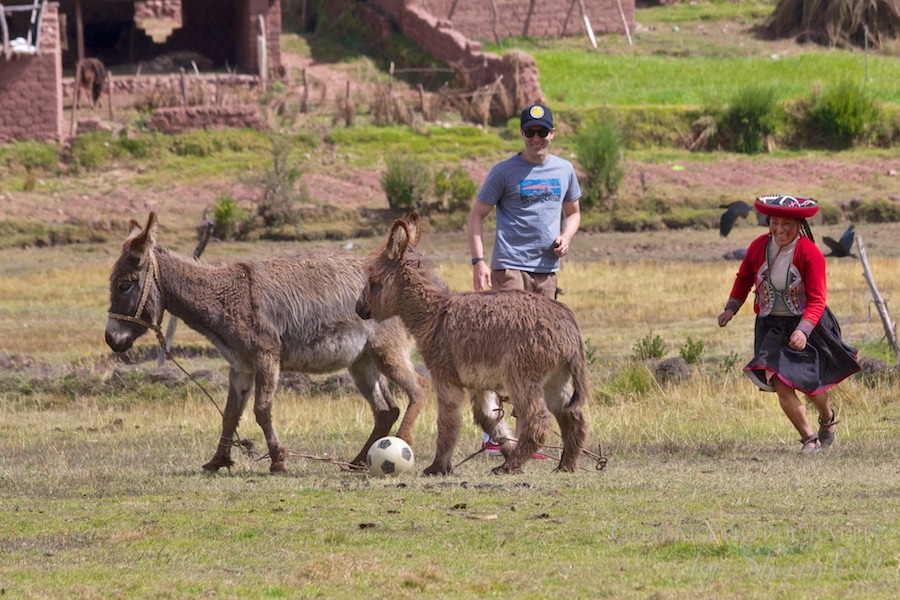 Football with a few new obstacles

Megan and I know very little about playing football, but we were game to try. Our Intrepid group was a mix of middle age men and women who knew much more about football then we did, and we would be playing the locals made up 90% of women! 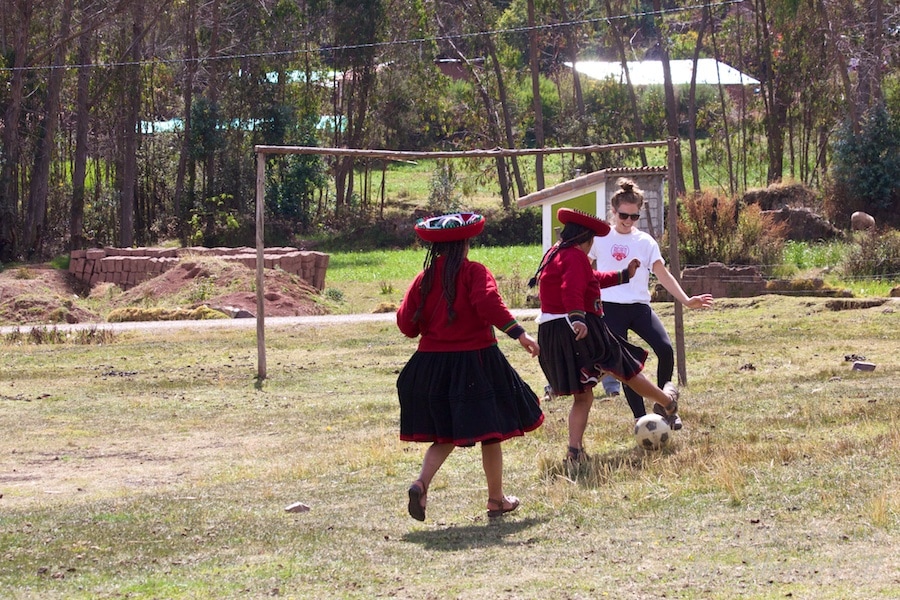 I was really intrigued to see how the local women played in their traditional dresses, hats, and rubber sandals – but it didnât seem to hinder them one bit. Megan once again boldly jumped into the game and was put as the Intrepid team goalie for the first part of the game. The field was rough and the competition high. I loved this light and playful air â everyone was full of smiles and laughs giving you a feeling of genuine fun as opposed to a manufactured experience.

Our little Tourist vs. Locals World Cup match was a highlight of my time in Peru. And yes â the Tourists lost 2 to 1; I learned to never underestimate women in local dress and their abilities!

We had worked up an appetite and sweat running around in the high altitude, and next we were treated to a lunch of the staple product â potatoes. The women had been cooking up a storm when we arrived.

I am always in amazement at what they can whip up in little mud, wood-fired âstovesâ, when I canât even seem to use a real stove that effectively. Kids played around us as we cleaned up and helped serve up the meal. I never knew there were so many different ways to make potatoes! 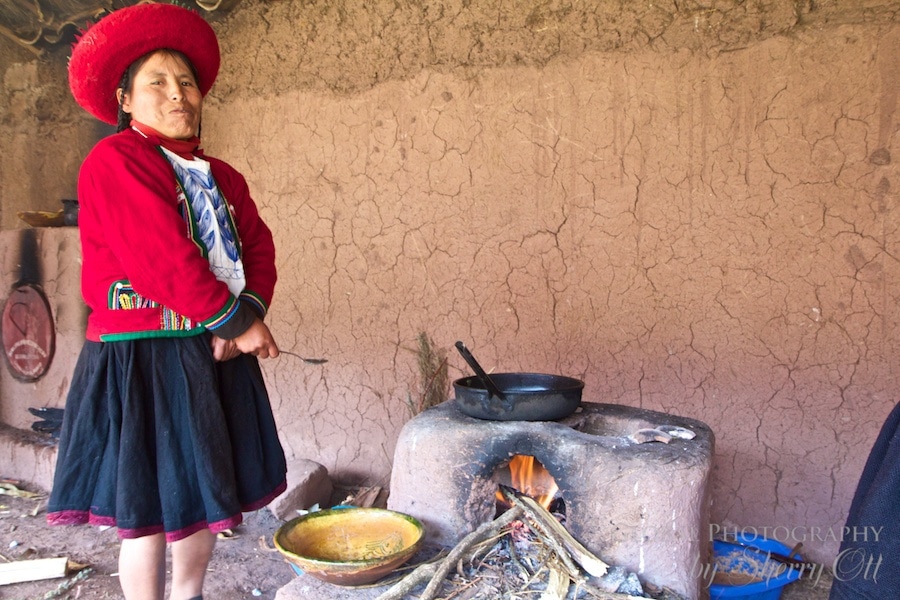 A traditional mud oven/stove – found all over the village 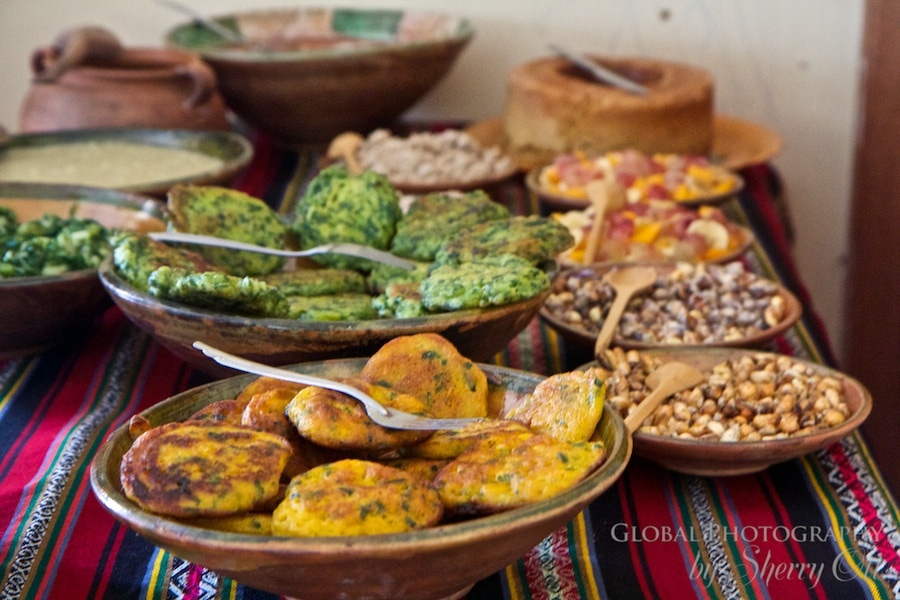 After a short weaving and dying demonstration, we were sadly all saying our goodbyes. Sure â there was a commerce element to it at the end in which we had the option of purchasing their wares, however there was no pressure to buy anything.

In my opinion however, I think the experience would have been even better without that element. But itâs also a fact of life when you are a visitor traveling through a country that depends on tourism. Itâs hard to find purely genuine interaction. And in some ways, Iâm taking from them (their stories and photos), so why shouldnât they want to take from me and sell things to me? Itâs impossible to get over that barrier of guest to respected friend in the short time we were there â so I would expect there to be a selling element in the end. However even our Intrepid guide stressed that there was absolutely no obligation to buy anything.

Sharing Cultures In the Sacred Valley

Overall, it was an afternoon of learning from each other â we actually interacted â even though we donât speak the same language and come from very different backgrounds. The day was filled with the opportunity to ask questions, observe, and be hands on. This is exactly the kind of interaction I want to introduce my nieces to when we travel.

We walked away from the village having a greater understanding of how the day-to-day life is lived, and how itâs also changing and becoming more modern with each generation. We laughed, we smiled, we carried babies, we competed, and we got our fill of potatoes!

Disclosure: I was a guest of Intrepid Travel as part of the Niece Project, however all opinions expressed here are my own.Â

3 Responses to "New Perspectives in the Sacred Valley"