What the Niece Project Taught me About Traveling With Teenagers

What the Niece Project Taught me About Traveling With Teenagers

âYou should put more sunscreen on because you look like you are burning.â
âDid you bring snacks with you? We may not be able to eat lunch at our normal time.â
âMake sure you go to the bathroom before we get on the boat as there may not be another opportunity.â

As soon as these statements came out of my mouth I realized that I sounded like a parent. Cringe. Iâm not sure what comes over me when I travel with my nieces, but I suddenly flip into âadult modeâ.

I have to purposefully remind myself that Iâm not there to parent them. Instead, I want to have an experience with them as a friend and hopefully part of that experience is to allow them to be an adult. Itâs a wonderful test in patience and self-control for me, two things I normally donât have a lot of.

Every time I travel with one of my nieces I have 2 or 3 weeks of realizations and learnings about what itâs like to be a teenager and how to cohabitate with them. This was my 5th trip traveling with a 17 year old, and I think I’m finally starting to get used to it and have learned what to expect when traveling with teenagers. Iâve picked up a lot of knowledge and tips on how to travel with teenagers through these trips and this time I tried to really utilize them while with Lindsey in New Zealand.

What to Expect When Traveling with Teenagers

They need to have time to interact with their friends, no matter if they are in the most amazing place on earth.

I watched in awe as weâd arrive somewhere and Lindsey could find the free wifi faster than Billy the Kid could draw a gun. Immediately sheâd be lying on her bed and embroiled in snapchatting and face-timing with friends.

Here we were in one of the most beautiful places on earth, and she just wanted to talk to her friends. The part that confused me was she would see those friends again in less than 2 weeks, but Lord knows how long it would be until she traveled to New Zealand again.Â  So why not put your time and focus into soaking up ever second in New Zealand? 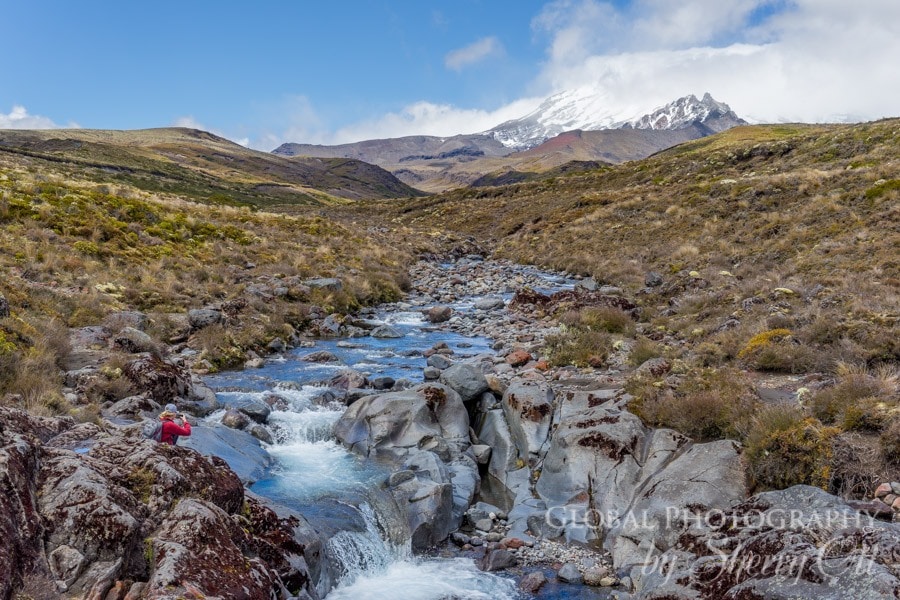 Who could ignore this beautiful New Zealand landscape?

I had to fight off my immediate reaction to lecture her about this, and try to put myself in her place. I realized that âkid timeâ is different than âadult timeâ. We have different outlooks on time and how fast it moves. Two weeks away from your friends as a kid actually feels like 2 years away from your friends. Plus, I think my frustration was amplified also because as an adult I look back on my high school friendships and realize that although important at that time, my bff’s probably werenât as long lasting as I thought they would be. But she would learn that eventually (just like we all did), so why should I lecture her on something that would probably piss her off.

Instead, let them do what they need to do to be happy on the trip. If talking to their friends wards off homesickness, then thatâs a good thing. I learned pretty quickly that when we did need to be somewhere or do something, Lindsey was always really good about getting offline and being where she needed to be.

They are really self-centered, accept it.

Be ready for lots of selfies. For a Gen Xer, like me, this makes me really uncomfortable. I wonât even follow people on Instagram if all of their photos are selfies. This whole âlook at meâ stuff bugs the shit out of me. This constant need for âdigital approvalâ and looking nonchalant (even though itâs staged) is annoying. But thatâs the younger generation, and selfies arenât going away.Â  Iâve learned to bite my tongue and accept it. I hope by taking them on these trips they begin to see the world differently and realize it doesnât simply revolve around them and their high school. But those realizations percolate over time, and hopefully one day they will realize it. 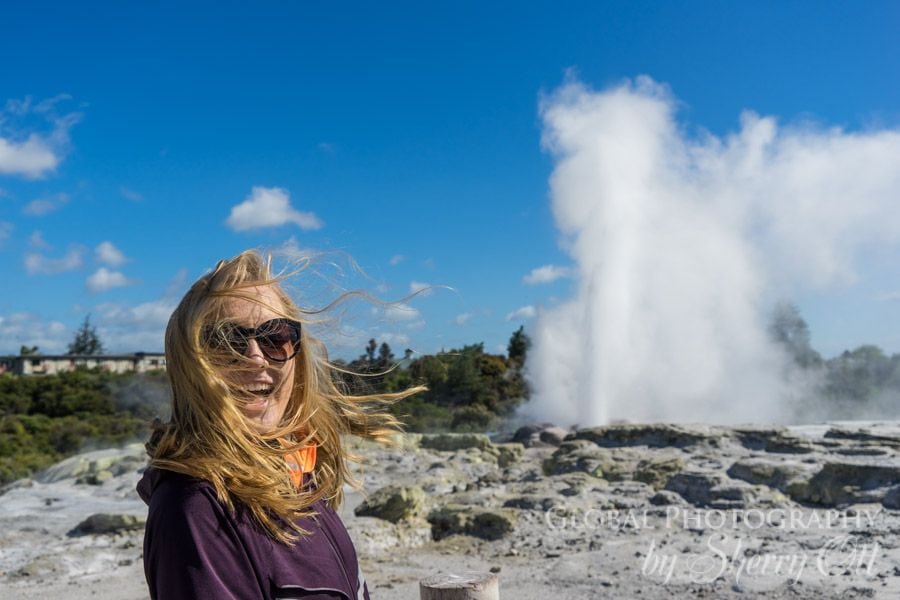 We must have shot this pic 15 times until we got it just the way she wanted it…nonchalantly staged. 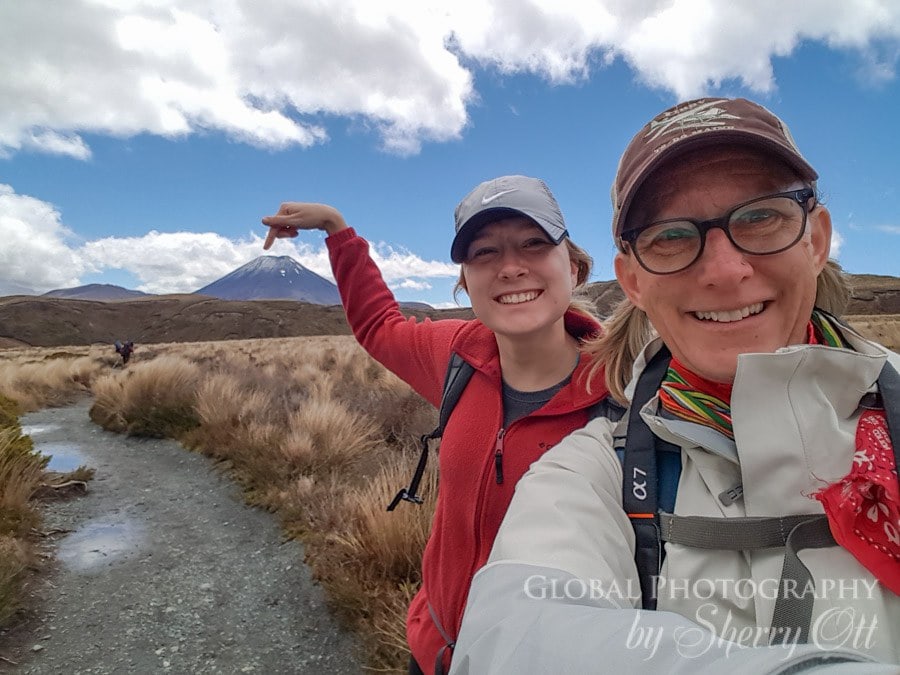 Getting in on the selfie craze! I may be getting the hang of it!

They put themselves down a lot.

This mainly applies to teenage girls. Lindsey would look at photos I took of her that I thought were cute and immediately sheâd zoom in on them and then say something critical about herself; Iâm fat, I hate my skin, I look ugly, etc. Itâs hard for me to hear coming from such a beautiful young woman. This is where I couldnât help myself, I had to lecture. I told her itâs a hard enough world for women that you donât need to punish yourself, youâll have plenty of other people judging you in your life.Â  You need to be your best advocate, not critical of yourself. After that, we made a rule, whenever she said something negative about herself, she owed me a beer. Ironically, she caught me a few times bashing myself, and we ended up even. Sadly, as an adult woman old habits die hard I guess.

They have stress, and itâs just as important and impacting as adult stress.

Itâs easy to belittle teenage stress, and I had to fight off that urge a few times. But once again I had to put myself in her place. Their stress about where to go to school, what to study, family stress, the pressure of grades, etc â is all distressing to them. I certainly remember it was for me when I was that age. Hence, acne. I could see Lindsey was really letting this stuff weigh her down quite frequently. We talked a lot about all of her big decisions she had coming up and I tried to simply listen. I wanted to tell her not to sweat this stuff as most of it wonât matter in the long run, but I didnât. I could tell that her stress about school was just as troubling as my stress about my own work and life.Â  Instead, I just listened and acknowledged how tough it was to make life decisions in general. 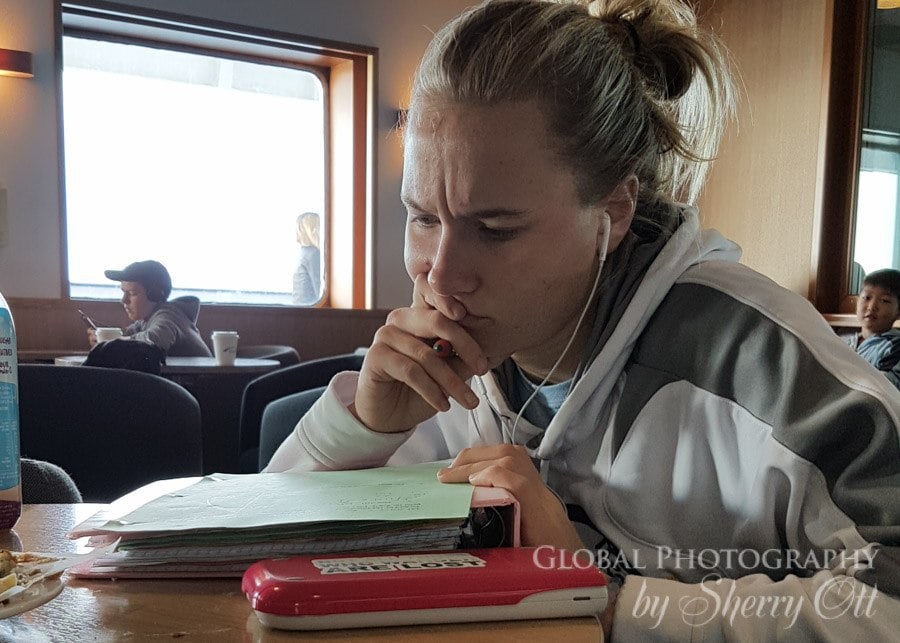 Lindsey doing a little calculus homework while on the ferry to Wellington. STRESS!

Itâs OK if they are homesick – itâs natural.

Realize that homesickness doesnât mean they donât like being with you. I was that kidâ¦the kid who started crying on sleepovers because I missed my mom. In fact, once my parents had to come and pick me up in the middle of the night at a camping outing because I was so homesick. Itâs pretty amazing that I left home at all at 18! While in New Zealand, there were a few moments around Christmas Eve and Christmas day where I looked at Lindsey and I could just tell that something wasnât right. Sheâs normally smiley and full of energy, but she was quiet and introspective instead. I could tell she missed her family at this time of year. So we made a Facetime âdateâ with her family for Christmas Eve. We made sure we were back in our hotel room with good wifi to do the call, even if that meant foregoing sightseeing in Wellington.

You are going to want to correct them, but donât.

Let them learn and do it their way. We went kayaking in Abel Tasman Park, and as I paddled behind her I had this crazy urge to correct her stroke. I wanted to tell her how to hold the paddle to get the best leverage and remind her to use her core. But I fought off the urge to correct as she was doing ok and not really hurting anything. I just let her enjoy instead of critique. 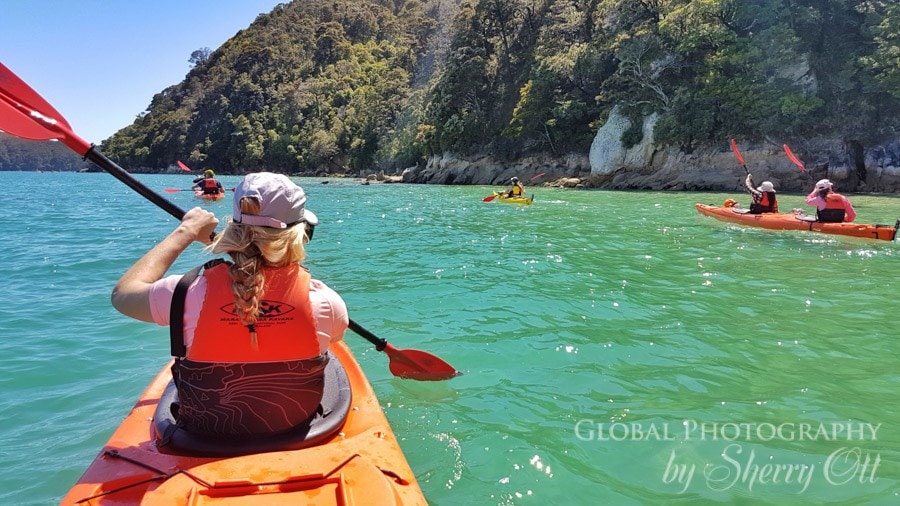 How they interact with friends (Snapchat or whatever the app is of choice), is not for you to judge (as hard as that is).

If they choose to send ridiculous pictures back and forth to each other with little actual text or conversation, thatâs their choice. Iâll never understand it – itâs not my generation. But it does no good for me to tell her I think itâs stupid. Instead I tried to learn how she used it and why. I donât know that Iâll ever understand it, but at least I tried.

I think my biggest tips I have based on how to deal with all of these things when traveling with teenagers is to fight that urge to parent and instead be patient, shut up, and listen.

Every time I wanted to say something that sounded parental or judge-y, I paused and normally talked myself out of it. Itâs so important to me that they travel with me as a peer, not as an authority figure. And it takes everything in my being at times to try to keep that balance. I certainly donât get it right all the time. There were plenty of times I said something, and as soon as it came out of my mouth I immediately thought…damn, that sounded like a parent. For most adults dealing with teenagers you simply want to help them and not have them make the same mistakes you made â the âif I only knew then what I know nowâ disease. But you have to let them make mistakes and do it their way – especially at this age. I kept telling myself that sheâs going to be out on her own next year anyway – so sheâll learn what she needs to learn.

One of the hardest things about traveling with teenagers is to just let them be who they are. Let them learn for themselves and to stop trying to control their lives and experiences. After all, most of the adults in their life are always telling them what to do and how to do it.Â  For once itâs nice to just let them be and figure things out themselves occasionally. 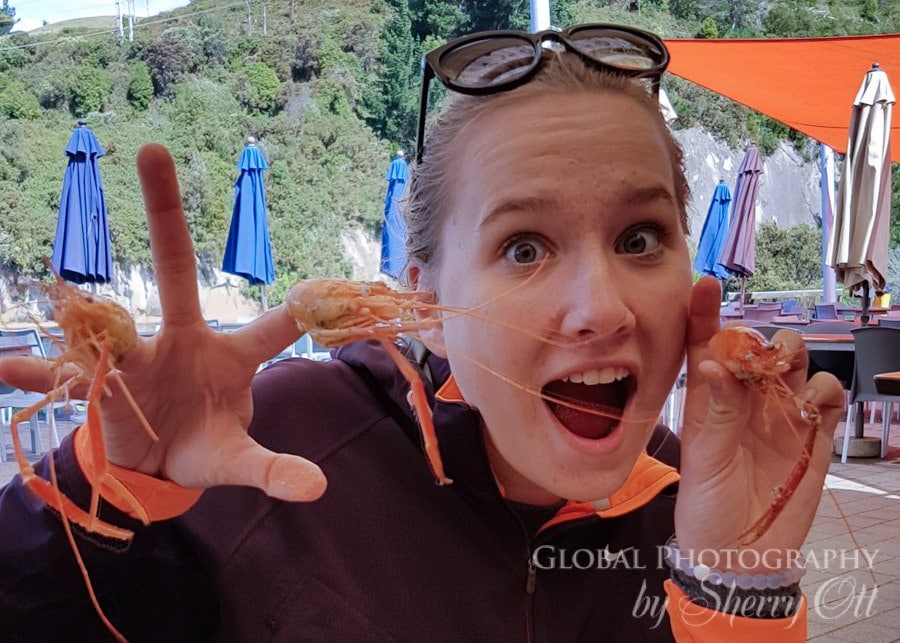 Lindsey playing with her food!

This is why I love traveling with my nieces, I learn so many personal lessons, and I get a little taste of what it must be like to be a parent. But most of all, I get to be their friend and confidant while introducing them to a bigger world. And maybe one day when they are stressed, confused, need a boost of confidence, or just someone to talk to â theyâll call (or Facetime!) me.

Are you a parent, an aunt, or an uncle who has traveled with teenagers? Do you have any tips to share on what to expect? Please share in the comments below!

For the 3rd year the Niece Project is working with Intrepid Travel!Â Check out their great family travel opportunities. Family doesnât always have to mean the conventional family, it is also for aunts and uncles!
I was a guest of Intrepid Travel on this tour However all opinions are my own.