How to Spend a Day Like a Local in Jaipur

How to Spend a Day Like a Local in Jaipur

This article was originally published on The Journal, the Intrepid Travel Blog. I have their permission to repost it.

The moment I stepped off the bus and onto the pavement in Jaipur, everything changed. I no longer was in the protected voyeuristic tourist mini bus, suddenly I was thrust into the local culture. But it wasnât just me; I was traveling with my niece, Erin, on her first big international trip. We suddenly became a part of the complex fabric of cars, food vendors, motorbikes, cows, and stray dogs.

It was fitting that we started our walk at the Wind Palace, a historical building where women could be voyeurs and watch the happenings in the streets from the safety of their little vestibule above. Now we had left our safety of our minibus bus and became a part of the streets. This is what I strive for when I travel, moving from voyeur to real experience. Our Classic Rajasthan tour was orchestrated perfectly because this âdecisive momentâ of hitting the ground at the Wind Palace in Jaipur was just the right time to jump into the local culture and chaos of India. Consequently, it was my favorite day on our trip; moving our entire group a step closer to understanding the Indian way of life.

Hitting the Streets of Jaipur 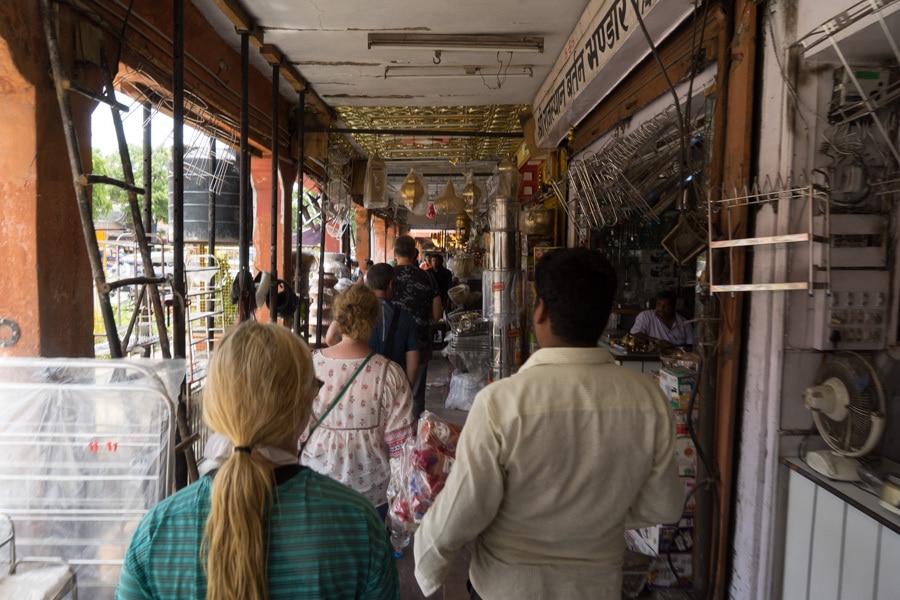 Walking through the Promenade

The horns were deafening as we stepped onto the streets in the heart of the Pink City. Our tour leader, Mohsin, led us around the colorful city gate and then into the narrow sidewalks where the store promenades were located. The promenade was crowded as we pushed through the people, all in single file line as Mohsin recommended. It was hard to keep up with the group as I would get distracted by the vendors who eagerly wanted to sell me things. At the same time I had to watch my step because the market sidewalks are more like an urban hike with boulders, potholes, and other obstacles along the way. Luckily our group had bonded even further during this process as we all watched out for each other.

While I was watching my footing, the locals were watching me. Itâs not too often that a bunch of foreigners parade single file down these streets, we were quite a spectacle. The Indians have this incredible and disturbing way of simply staring at you. In most places I would feel uncomfortable with the long, intense stares, but in India itâs normal. In a weird way itâs freeing, it gives you permission to stare back for once in your life.

After we walked through the market promenades, we headed towards another neighborhood, but this time we left the safety of the sidewalk and simply took to walking on the streets shoulders like the locals do. Surprisingly walking along the street is much easier than the unpredictable sidewalk in India. Cars and motorbikes drove around us as we wove in and out of other pedestrians; it felt like a real life video game. 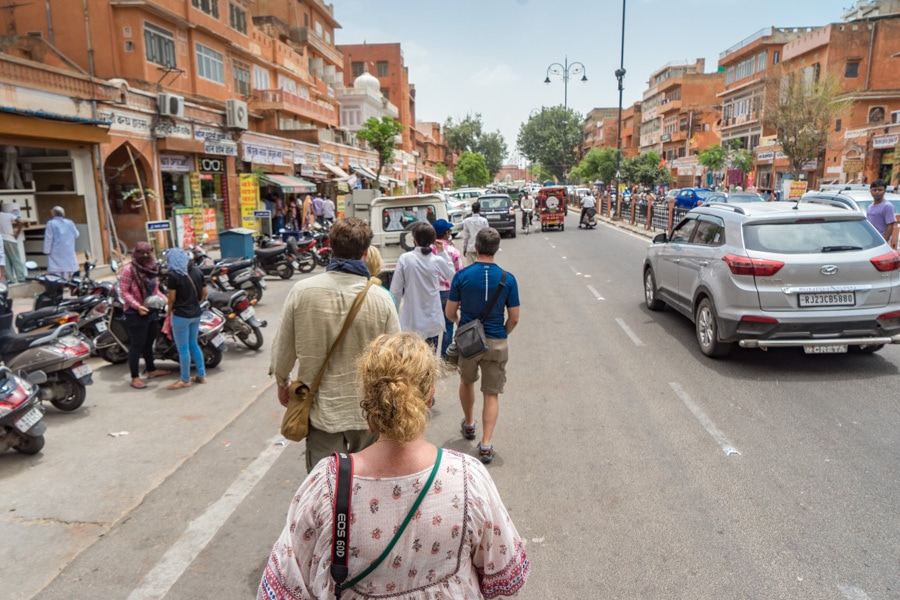 I immediately wanted to cling to Erin to make sure she didnât make a wrong move. But I also knew I had to just let her go and figure it all out like everyone else in our group was doing. Occasionally the mothering instinct comes over me and surprises even me. I wasnât the only one with mothering instincts; it was reassuring to see Mohsin keep a close eye on her too in this hectic environment.

âFor the first few days Iâve chosen restaurants to get your stomachs used to India, but today if youâd like to taste the street food on this walk you can,â Mohsin explained. This was the moment I had been waiting for. We had been passing all of these wonderful smells and sights of food, and my stomach was longing to try some of it. Yet it was India â there were plenty of warnings also dancing in my head. 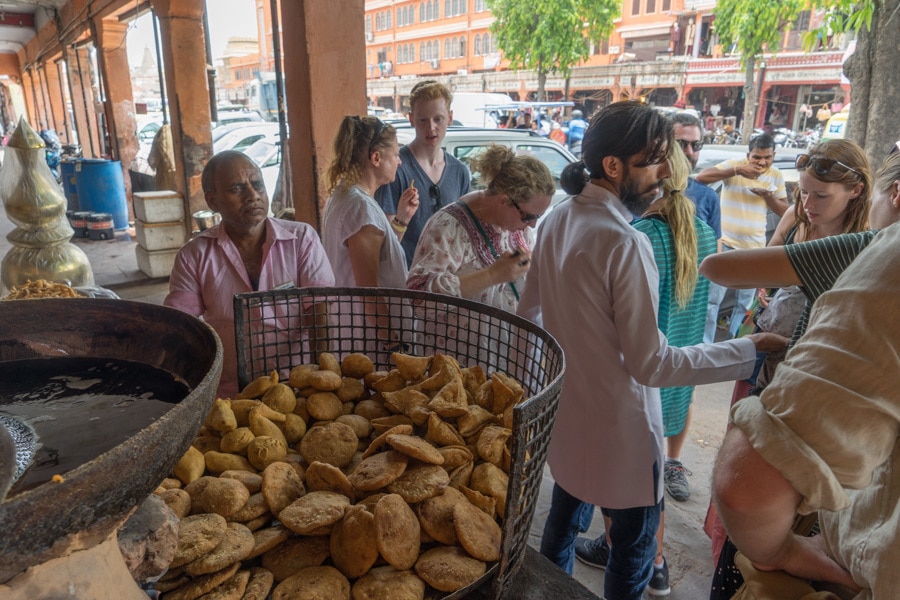 Mohsin carefully picked the vendors we went to; choosing ones heâd been to before and felt were safe. Of course there is never any guarantee you wonât get sick, but I was excited to try the food on the streets and we were all eager to follow his lead.

We ate fried treats, enjoyed a sweet lassie from the best place in town, tried the local candy, and watched a chai wallah (tea maker) make the best Masala Chai tea Iâve ever had. The family at Sahu ki Chai has been making Masala Chai out of this storefront since 1968. Upon first look, itâs a place I never would have stopped in a million years. The âstoreâ was a bit worn and grimy, and the chai wallah was wearing an old shirt, and didnât ever crack a smile; it wasnât very welcoming. Yet he made a fresh batch in front of us as we patiently waited and watched him drop in secret spices while bringing the frothy mixture to a boil multiple times. When he deemed it perfect, he poured it into traditional clay cups. Erin and I stood on the street on a 90 degree day sipping our piping hot masala chai with the rest of the locals lined up at his storefront. Travel days donât get much better than that.

Our final food stop was at the samosa stand where a line of locals waited patiently for samosas to be retrieved from the piping hot oil and put on a little paper serving plates. The prices were ridiculously cheap and the samosas were ridiculously hot. As we navigated eating the fresh fried treats, most people watched us and smiled. A few got up the nerve to practice their English and ask us where we were from. And some even confirmed what Mohsin had already told us â this was the best samosa stand in town giving us the âthumbs upâ seal of approval for being awesome tourists who ate the local food.

Itâs rare that I go to a movie when I travel internationally. After all, movies are normally things I do at home when Iâm bored or have nothing else to do. However when you are in India, going to a Bollywood Movie is a chance to have a local experience despite the language barrier.

Our hotel was near the Raj Mandir Theater, a popular place for Bollywood movie premiers. Everyone unanimously decided to do a group theater outing to experience this slice of local life. The theatre lobby was grand. Decadent, colorful wallpaper lined the walls with golden sconces providing a soft glow. Yet there were also remnants of familiarity like buttery popcorn and soda. Even though the food was familiar, the price wasnât! It only cost $6.75USD for a big pale of popcorn and 2 sodas!

The movie, Fanney Kahn, was in Hindi; however, Mohsin assured us the story line would be simple enough to understand by watching. The doors opened to the theater and we poured into the grand room with the rest of the locals. Attendants with lights ushered us along to our assigned seats as movie previews flashed across the screen.

Erin and me outside the theater

Mohsin was right, I did understand most of it, and he filled in the gaps of the romantic plot during intermission. It was your typical Bollywood story line â filled with romance, dancing, and singing â and I loved every minute of it. This isnât the type of movie I would ever watch at home, however it was the idea of watching a Bollywood movie in India that made it so special. It gives you more insight into the culture, plus it was awesome to eat popcorn for dinner!

These were all simple experiences; walking, eating, and a movie â but they were made unique because we were able to do these things while traveling in India. They moved us from being tourists to being a part of the experience. Itâs the mundane things in a foreign place that can have the most impact and meaning when traveling. Drinking chai, dodging cars, eating popcorn, while interacting with the locals on their level â thatâs what makes a great local day in Jaipur.