How To Be First In the ATM Cave Belize

We put on our helmets and tightened the strap. Allie was quiet as usual as we follow our guide Lenny down to the waterâs edge and took our first look at what we were undertaking early this morning. The cave entrance is shaped like an hourglass and there is a pool of light blue water. It doesnât look intimidating; it looks welcoming.

Lenny turns and asks, âCan you swim?â We both answer yes. Yet I canât help but think itâs a bit weird for him to ask us this question at this time in the tour. For the last hour, weâve already trekked into the jungle, waded across waist-deep rivers, and arrived at the cave entrance. Thereâs not a life jacket in sight. What was he going to do if we answered âNoâ?

Allie asks if the water cold and Lenny replies, âall water in caves is coldâ and she turns to me and grimaces.

Our guide Lenny was very knowledgeable, but very dry in delivery. I was sort of hoping weâd have someone more charismatic so that it would create some excitement around this caving adventure, but you work with what you get. He was a bit like my niece Allie in a way – no nonsense, and doesnât mince words unless you get her on the right subject.

I pretty quickly learned that Lennyâs subject that he liked and would perk up a little about was history. So I kept asking him background questions about Mayan history and he entertained us for the long walk to the ATM cave. âYouâve got to love this,â I say to Allie, âyouâre not the one getting asked a bunch of questions from me for once.â
She smiled.

Guides Can Make or Break an Experience

Read my article about Guides who make you Go!

Every time I told someone that my Niece, Allie, chose Belize for her Aunt/Niece trip theyâd tell me that I must do the ATM cave. I like adventure so it sounded good to me. I knew nothing about it except that it was really popular. So when we took off that day, I had no idea what to expect, except to wear water shoes, and there would probably be a lot of people.

The Actun Tunichil Muknal, also known locally as ATM is a Maya archaeological site that includes skeletons, ceramics, and stoneware. The chamber is where human sacrifices were conducted along with other sacrifices and it was so well preserved deep in the cave that you can even find full skeletons in the chamber. The best-known is “The Crystal Maiden”, the skeleton of an adolescent (now thought to be a teenage boy), possibly a sacrifice victim, whose bones have been calcified to a sparkling, crystallized appearance. 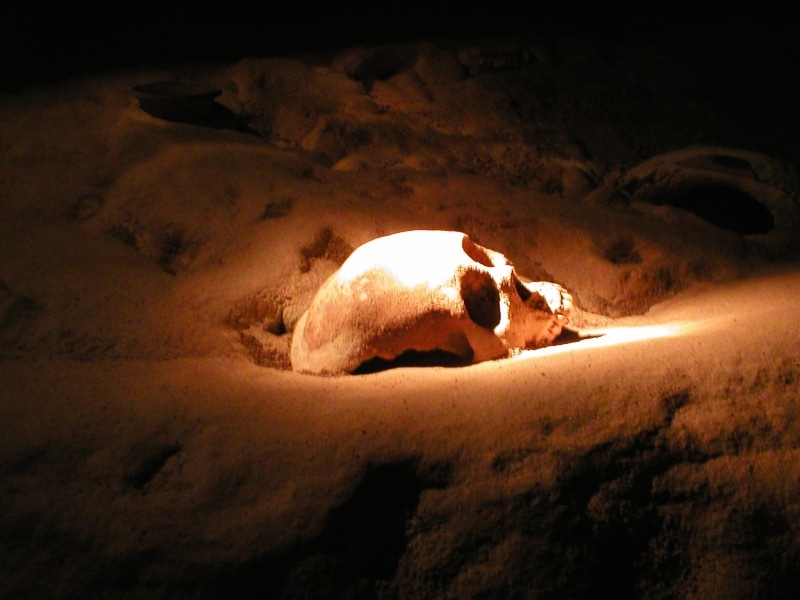 All of this is great if you like artifacts and ruins â but thatâs not really what interested me about the cave, instead I was just interested in the journey â the trip through the watery cave to the chamber. Small, dark spaces, cool formations, and a bit of heart pounding adventure â thatâs my speed.

We began this adventure from the parking lot and got to the first river crossing; there was no messing around, no warnings, and no âhand holdingâ. Lenny just walked in and told us to be careful of the big rocks and away he went. Allie and I looked at each other and followed him, albeit a little slower. 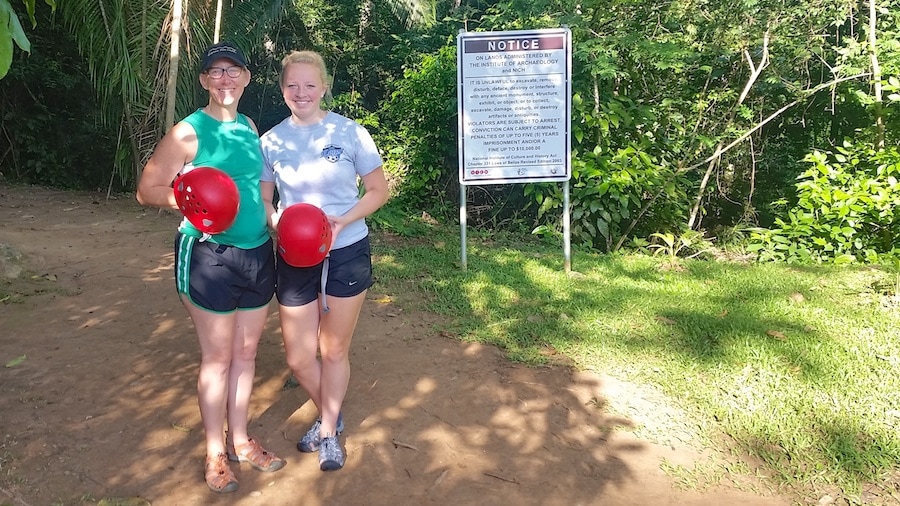 How to be the First People in the ATM Cave

Lenny kept telling us how lucky we were that weâre the first group in the cave since Pooks Hill Lodge was the closest lodging entrance. Being first in was definitely a perk of staying at Pooks Hill. However as we started wading through the chilly water into the cave I felt a little weird to know that we were the only ones there. The water at the entrance was deep, and we paddled our way through the turquoise pool and towards the darkness. After the initial swimming hole, it became more shallow as we scrambled up and down jagged rocks holding on and pulling ourselves up cracks and through water. This was much more strenuous than I was expecting â which is why I had a big grin on my face.

What will you See in the ATM Cave

Lenny turns around as we are waist deep in water and says, “oh and you may see batsâ. Lenny had a way with timing. I prescribe to my – âif I donât look for them it will be okâ attitude as Allie turns around to me and says, âbats?!â and I just say â âitâll be ok, they want nothing to do with you.â This seems like the adult answer I always received when I was a kid and scared of some animal or bug. Does this mean that Iâm turning into my parents? Oiy.

Bats flew around as we went deeper and deeper into the cave. At one point I shined my light ahead and had this weird feeling that we were wading through some Disney ride. I think this is how I cope with things that seem so amazing and unreal – I actually think of them as being unreal.

Allie and I didnât really need to talk much as we kept exchanging glances like, âHoly shitâ, can you believe that we are doing this? At one point she said to me, âDonât let me get lostâ – I thought to myself – ditto. I had more than a few moments of excitement that turned to worry. Worry about – oh my God, what if something goes wrong, Iâm responsible for her. This parental responsibility takes me by surprise each time and I hate it. Itâs makes my stomach turn as I can feel the weight on my shoulders. If this is parenting then Iâm glad I skipped it.

Lenny pointed out artifacts and told us where to step when necessary as we climbed up waterfalls, and avoided jagged rocks, drop-offs, and the occasional giant crayfish. Finally we got to a big boulder and he tells us that we are going to climb up to the top, take off our shoes, and go the rest of the way into the chamber. I looked at this boulder and where he was pointing as our shoe drop off point and thought – we have to climb up there – holy shit. Allie and I followed in Lennyâs footsteps literally and slowly made our way to the top and deposited our shoes. This was definitely an active adventure.

The chamber was full of broken pottery and partial human remains; leg bones and even skulls. I stared incredulously at the pottery and the occasional skull and was in disbelief that people actually carried all of this stuff back here with fire torches. We were a mile into the caving system after all, and had to wade through water the whole way! The Mayans were clearly interested in being secretive.

The chamber opened up like a giant dance hall and when Lenny shown his spotlight in the distance and near the ceiling there were stalagmites and stalactites everywhere – I let out a gasp. I felt as if I were in a Dr. Seuss book and expected Thing 1 and 2 or a Hoo to walk out from behind a stalagmite at any moment. You really have no idea what is around you at any one time in the cave. We kept going through smaller and smaller spaces and eventually came to a manmade aluminum ladder.

Lenny starts climbing up it and Allie says, âWe are going up that?!â I was surprised that she was surprised at this point. We made it up the ladder and through one last passageway until we came to the main attraction – the Crystal Maiden. There is was, the complete skeletal remains of a human sacrifice that was from the 8th century; practically perfectly preserved. 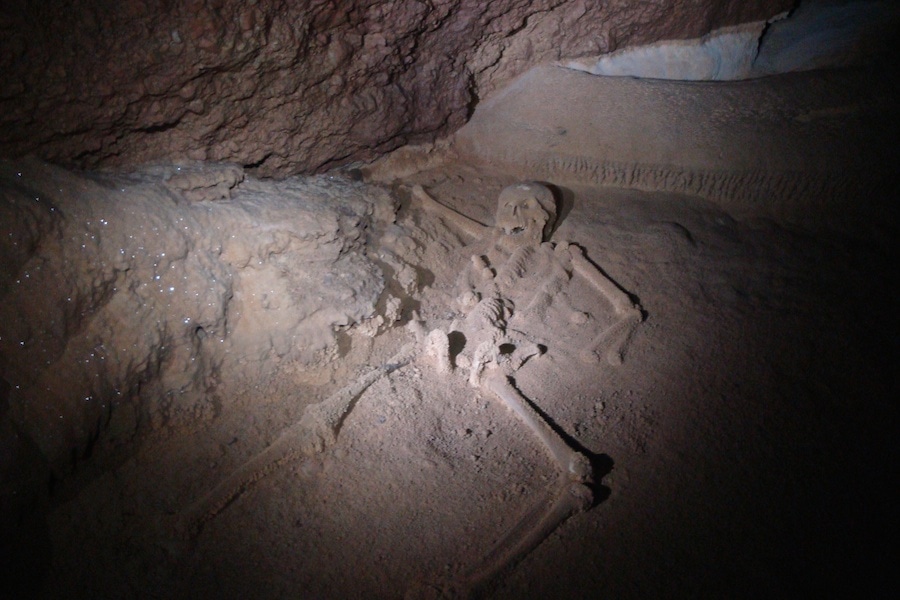 On our way back out, Lenny had some surprises for us, he made us turn off our headlamps to just experience darkness. This was creepy, complete darkness â D-A-R-K. It was about then that we started to hear the noises; it startled me at first. Then I realized that all that talk about us being first in the cave was true, we hadnât seen or heard another group, until now. The sounds echoed through the cave system and I realized pretty quickly how wonderful it was to be first.

On our way back out, Lenny led us through super tiny spaces, down waterfalls, and narrow watery corridors. You could tell Allie loved this as every time sheâd turn around and give me this wide-eyed look of excitement and fear – adrenaline controlling both of us now. This was by far the highlight of our caving adventure and something that Allie had never experienced before and clearly loved. Sure, she had never seen crystalized skeletons before either â but from her reaction, I knew she liked the adventure of making our way through the caveâ¦just like her Aunt.

Travel Tips for the ATM Cave: 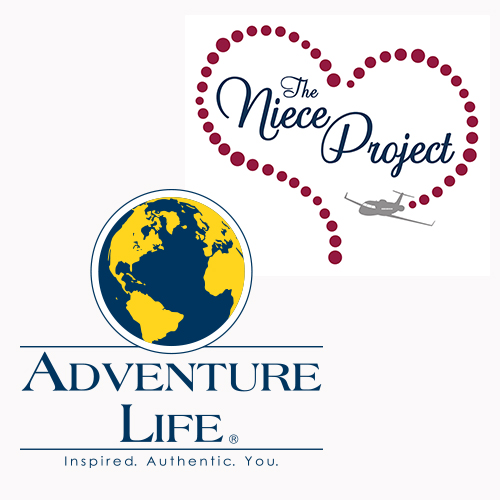 Want to be first in the cave, then stay at Pooks Hill Lodge, the closest lodging to the entrance. The Lodge will provide you a packed lunch and a guide.

Tell your guide if you want/need a life jacket while you are still at the parking lot.

Absolutely no pictures are allowedâ¦trust me, I pushed and pushed on this restriction and there was no budging.

I had a watch stolen at the entrance to the cave where we left our backpacks, so I advise you do not bring anything valuableâ¦especially no cameras.

Stay a few days in the area and do more caving and jungle exploration with Adventure Life.