What to Expect in Halong Bay 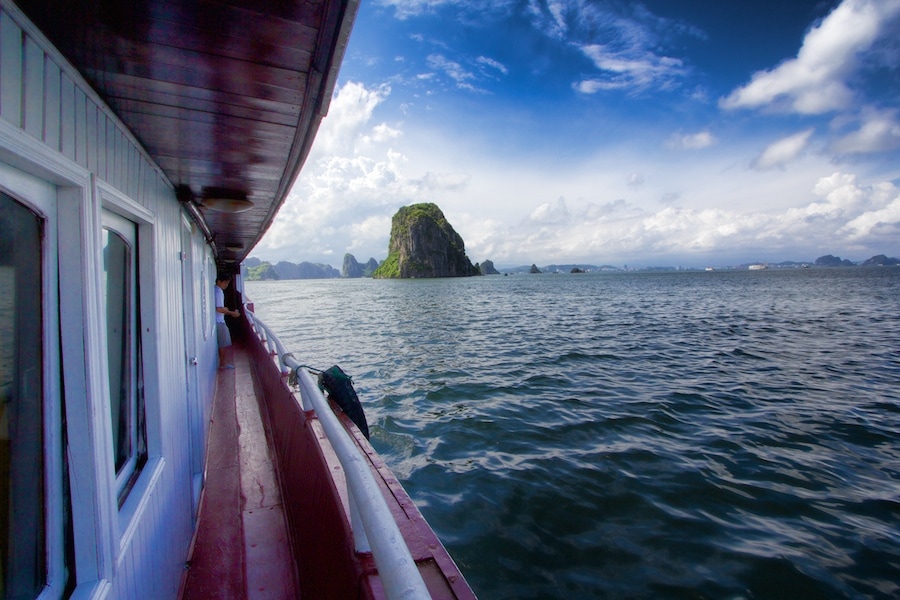 Riding a junk boat into the beautiful Ha Long Bay

I stared out the window of the van and watched as the city gave way to suburbs, to industry, to rice fields, that would eventually deposit us in Halong Bay. As I watched our driver play chicken with big trucks, dodge motorbikes, and zip by the slower bicycles and buffalo â I thought that not much had changed in Northern Vietnam in the last 5 years since I had been there. Sure, the suburbs of HaNoi were planned a bit better with more space, but all in all there seemed to be about the same number of motorbike to car ratio on the little 2 lane roads. The 2 lane roads were still used in the same way â lines were pointless as any space that was needed was used to weave in and out of traffic turning the official 2 lanes into an unofficial 3 and 4 lane road at times.

But then I started to see them. Square, lifeless, cement structures – more big buildings and factories as we started heading East towards Ha Long Bay. I perked up when I saw the name Foxconn on the side of one of the white factory buildings and I asked our tour leader, Ngoc, if that was the infamous Foxconn of China/Taiwan and Macintosh manufacturing and he confirmed. Foxconn is a big manufacturer who works with many American electronics brands but most notably they manufacture the holy grail of our day â the iPhone.

This was definitely new to the area – it was odd to see this industrialization move into villages and rice fields. I wondered what happened to all of the farmers who used to be here not more than 5 years ago. Maybe they got factory jobs, maybe they went to work in the tourism industry in Halong Bay, or maybe they just gave up.

When we arrived at the port in Halong Bay â we had left the industry of manufacturing and became part of the tourism industry. There are over 600 boats in Ha Long Bay serving local and international tourism. Why so many boats? Because the limestone formations are just that beautiful. Youâve probably seen the stunning pictures of the old wooden boats on Ha Long Bay â they entice you with their old world feel and charm of the Orient.

But before you get your expectations too set back in the ancient Orient and the world of spice trade and dynasties â know that sometimes the reality is a bit different.

I had seen pictures before and had even been to Halong Bay once before â but now as I peered out at the port with rows of boats docked, I realized that something had most definitely changed. All of these famous junk boats were painted white instead of the brown that I was accustomed to seeing in other tourism pictures. Ngoc informed us that all of the boats were required to be painted white a few years ago by the government. Not sure who decided that this was going to be a brilliant idea â but whoever they were â they were wrong. Everyone sees the pictures of iconic brown junk boats with their fanned out sails in the bay â looking picture perfect. But do know that itâs just that â itâs only for a staged picture. Unfortunately itâs those pictures that set our expectations â so I can imagine that some people are rather let down when they actually see the reality.

The reality is that all of the boats are now painted white â and because white unfortunately shows a lot of wear and tear they look pretty beat up and in need of a paint job. In addition, the sails are rarely used for sailing any longer on a day to day basis. Instead or sailing out to the limestone formations, a row of junk Boats chug out on a well worn path under the help of an engine â the sails are never put up. I only saw sails on 2 boats while I was there â and they were anchored.

No Swimming Or Diving

If you have idyllic visions of jumping off those beautiful white boats into turquoise waters, you may be disappointed. We were informed that tourists were no longer allowed to jump/swim off the boats. Another new government regulation which is a bit absurd if you ask me. I wasnât real sure if this was an actual âruleâ or a suggestion. I also wasn’t sure what they are trying to prevent with that measure since the Vietnamese government never really seemed too worried about peopleâs safety in the past compared to Western standards. But the boatsâ crews enforce the rule as they said that they get heavily fined if tourists are caught swimming off the boat. Â We enjoyed soaking up the sun on the deck instead.

Is Halong Bay Worth It?

Despite the number of tourists, white boats, lack of sails, and restriction on swimming off the boat â that doesnât at all take away from the scenery you will chug on by. The limestone islets are said to be over 500 million years old and are a UNESCO World Heritage sight for good reason – they are spectacular. Â For me, photography is one of my main goals, so the scenery alone was enough for me to recommend Ha Long Bay. In addition, Evie and I had a marvelous time and overnight on the boat soaking up the sun, touring caves, and kayaking. The food on our boat was delicious and the sleeping conditions were good (we even had air conditioning!). If you are looking for a hard core sailing or kayaking experience, then Ha Long Bay might not be the best choice for you. But if you want some R&R and scenic photography â itâs perfect. And in order to properly set your expectations, I can assure you that there was no special staging for these photos I took â this is pretty much what you can expect when you visit Ha Long Bay â one of the most scenic stops in Vietnam. 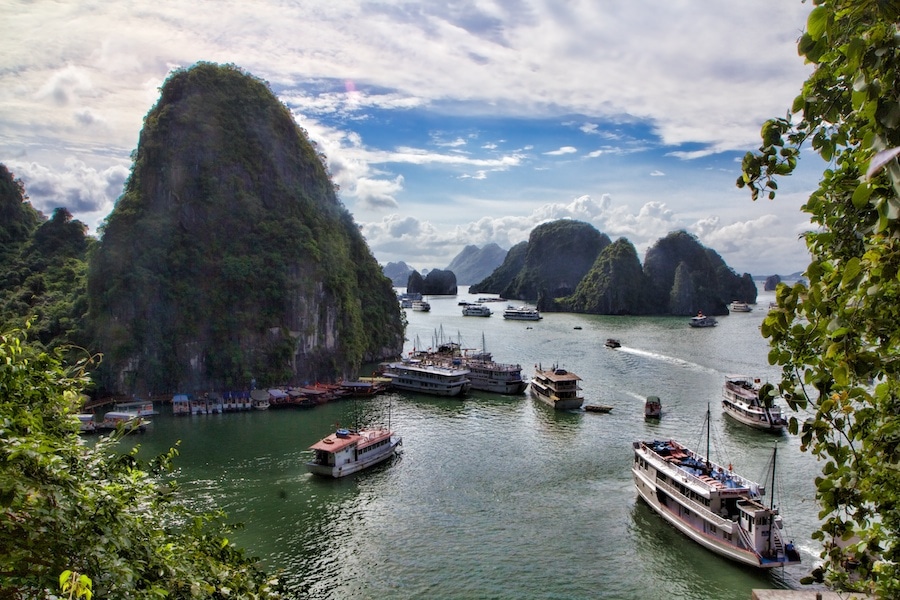 A popular ‘parking spot’ for the boats near the caves 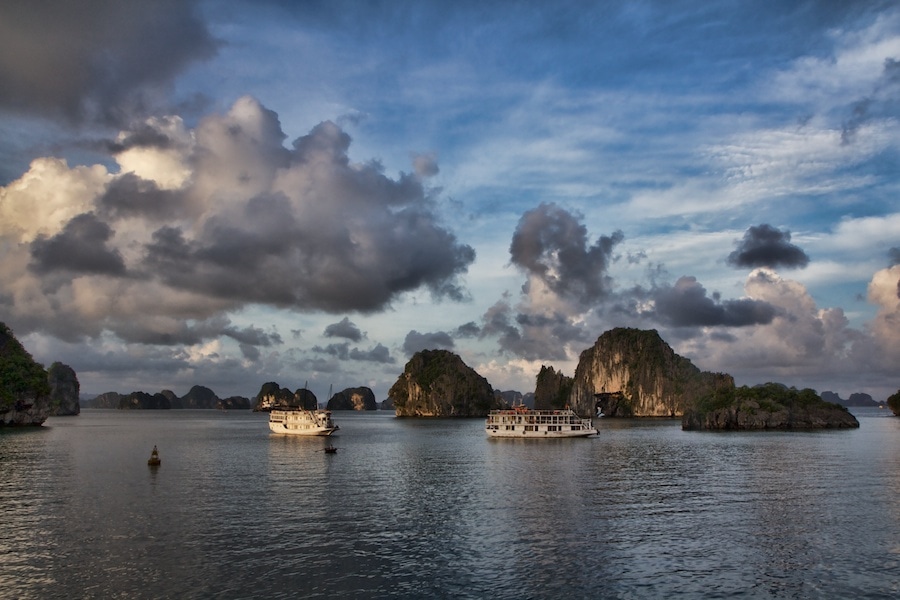 Sunset in the bay left a golden glow. A great reason to do an overnight junk boat. 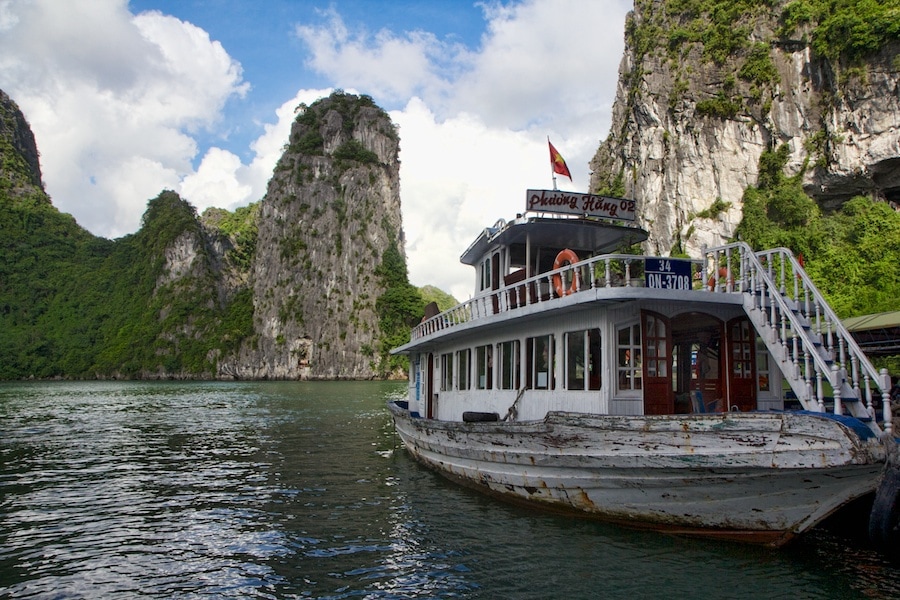 A white junk boat parked at one of the caves.

Plenty of time to relax and soak up the sun. 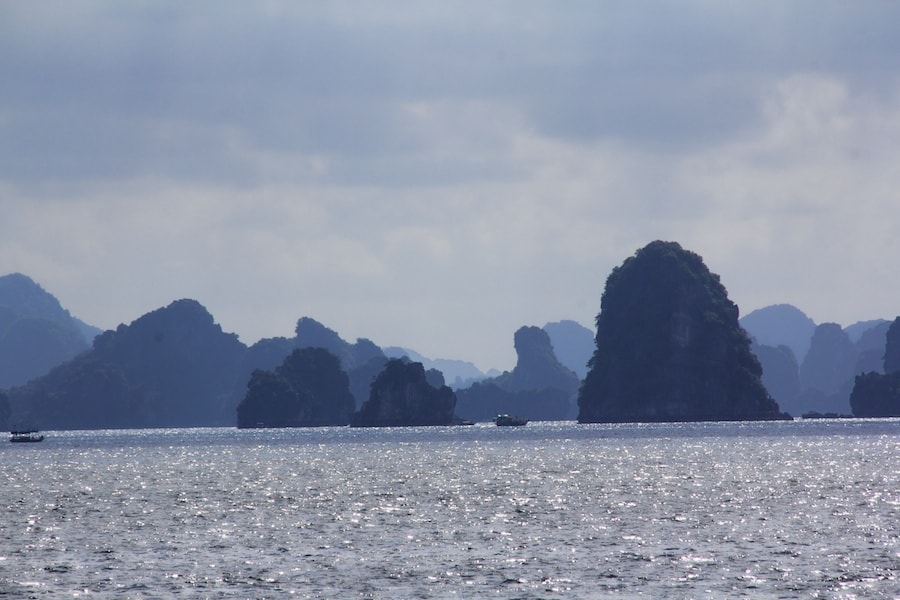 The limestone formations seems to go on forever 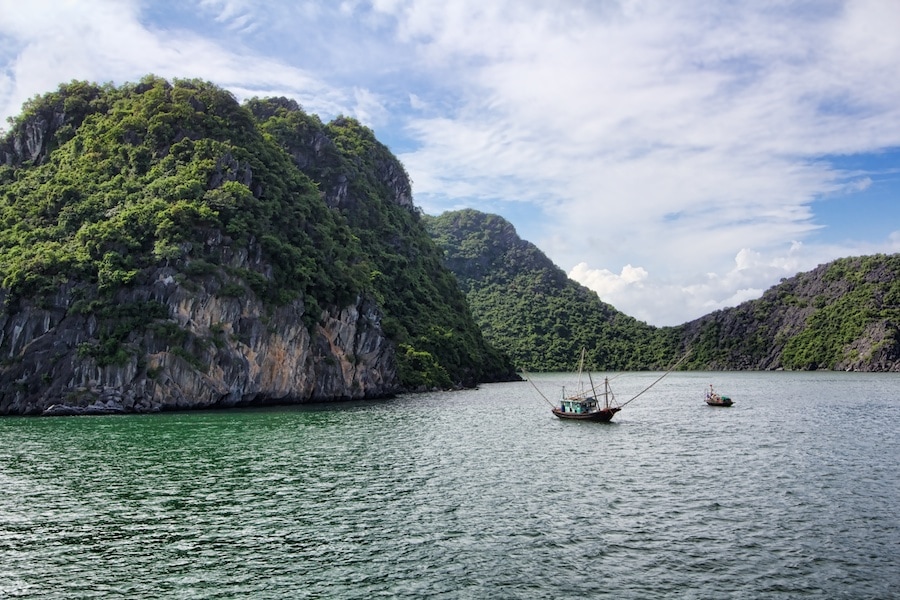 A local Â fishing boat in the bay 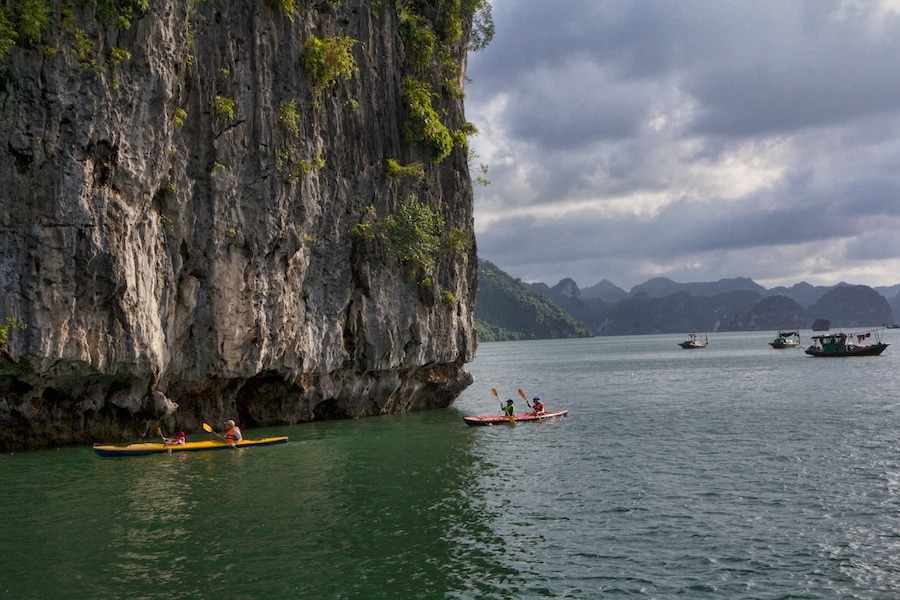 Kayaking is a great way to get up close. 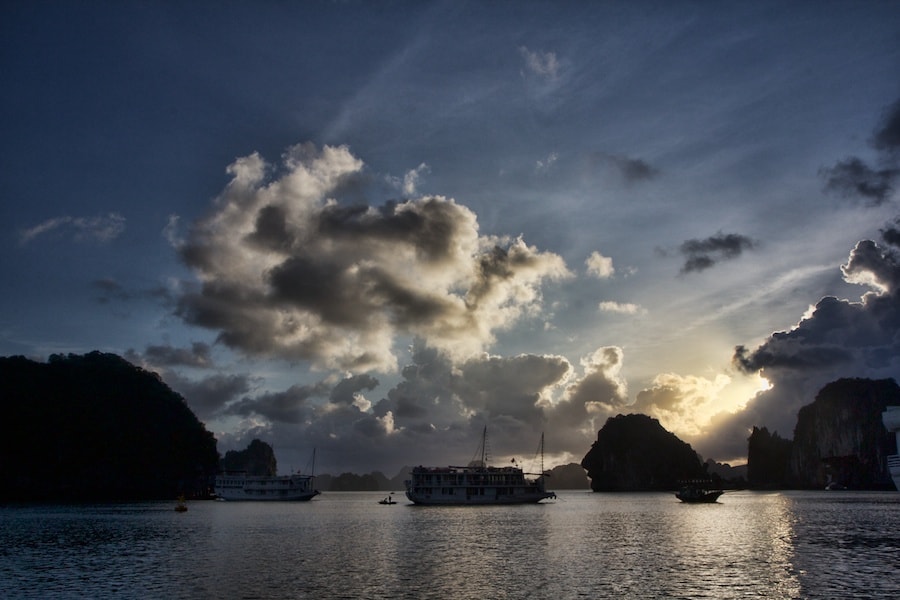 Sunrise from the boat…a lovely sight. 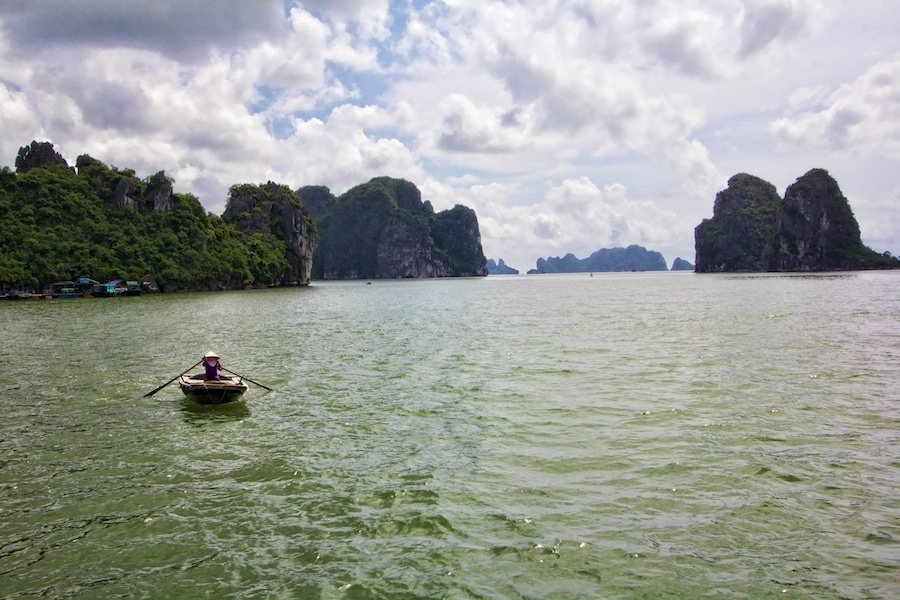 A local rows a boat in the bay. Many locals still live and work on the water in the bay.

34 Responses to "What to Expect in Halong Bay"