Finding our Stride in Hanoi 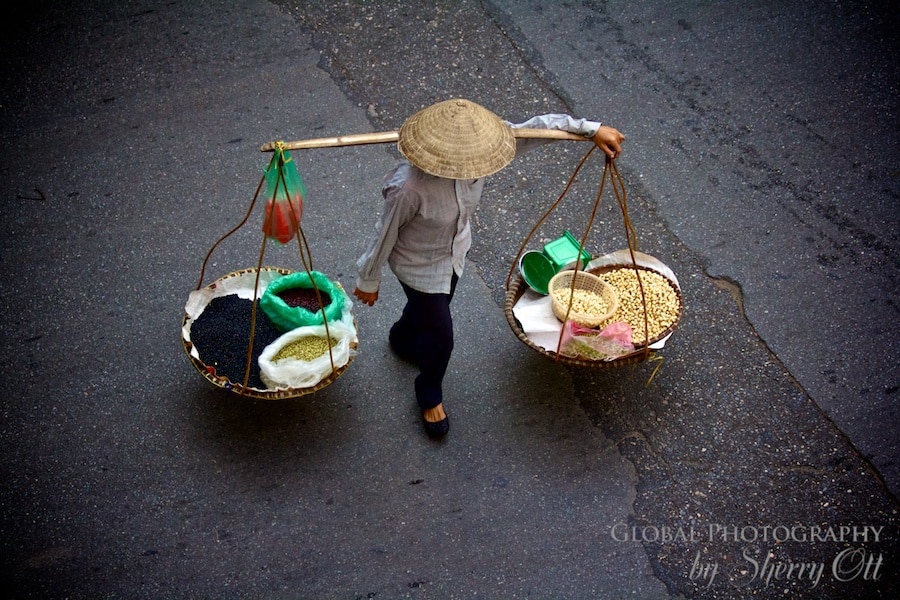 A Hanoi street vendor strides through the streets.

Jet lag was wearing off, and now we were rapidly adjusting to a new culture and environment. After 4 years of being away from Vietnam, my brain was happy to be exposed to all of this new and sometimes baffling culture again. Evie was also taking a lot in trying to make sense of Vietnamese life in the context of what she knew. One of her first questions to me as we looked out our window at the busy traffic corner below – âWhat do all of these people doâ¦for work I mean?â

Often when you go to a new country or culture everything seems so strange â especially when you try to evaluate it in the context of what you know. To her – adult work is going to a profession such as banking, nursing, engineering, teaching, etc. However, in Vietnam adult work can mean selling soup out on the corner all day, or being a motorbike taxi driver, selling lottery tickets door to door, or working in a little plumbing shop in the Old Quarter. I tried to help her see through some of the chaos and point out various professions/jobs that people were doing that were more vocational as well as professional. I also tried to point out schools, churches, banks and other institutions because often in new countries itâs hard to see these things in a new landscape. We are blinded by the newness and noticing things like our typical institutions tend to anchor us and make us feel more familiar. 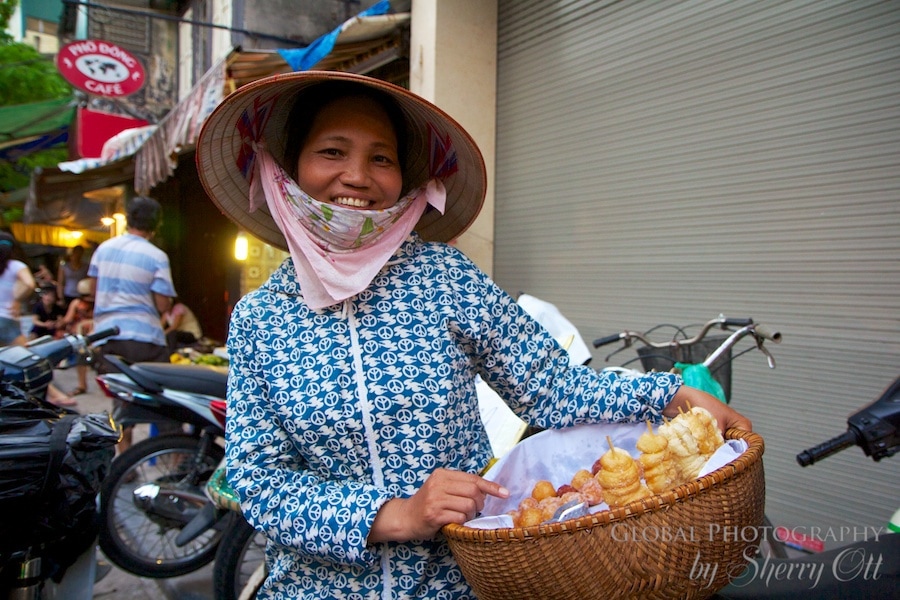 A street vendor ‘working the streets’ in Old Quarter Hanoi. Not a typical 9 to 5 job. 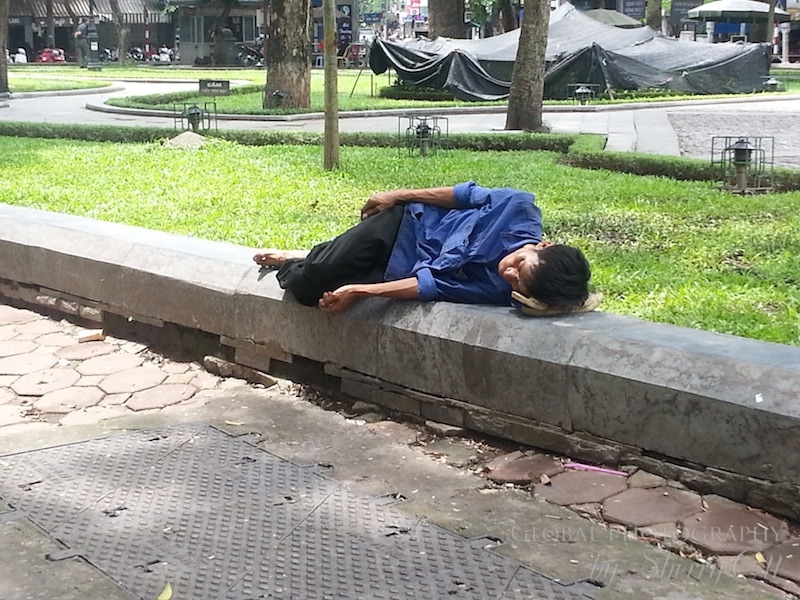 A motorbike taxi driver takes a little mid day nap on top of his flip flops. A typical site in Vietnam. 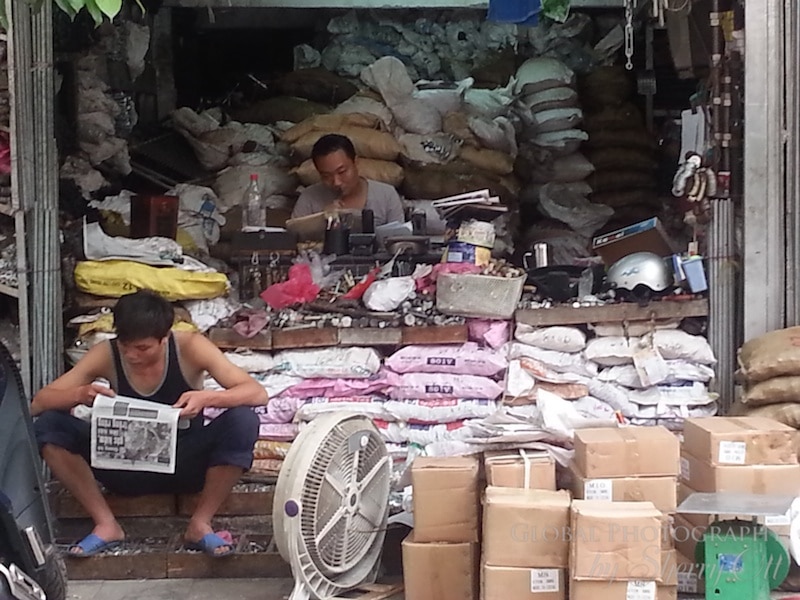 Old Quarter is full of little packed shops with what appears to be not much business. It does make you wonder how they survive.

Before we left for Vietnam Evie had sent me an email asking if we would be able to find a place to go to mass on Sundays in Vietnam. I remember reading the email and thinking â now this is going to be a challenge. Not that Vietnam doesnât have plenty of catholic churches, itâs simply a request that I had never received before. Besides going into churches to take pictures â I donât really venture into them for other purposes. However I did find a couple on the map of Hanoi and plotted a route to include them in a longer walk to see Ho Chi Minh Mausoleum and the Hoa Lo Prison.

We set out lathered in sun screen, with bottles of water, cameras, and my map on my smartphone. We started off great â found the first church right away and it was open to view so we walked around and watched the people prepare the church for some upcoming celebration. Flowers were being placed in strategic places, vacuuming was being done and we wandered around and no one said a word to us or were particularly friendly, but they did give us a smile. 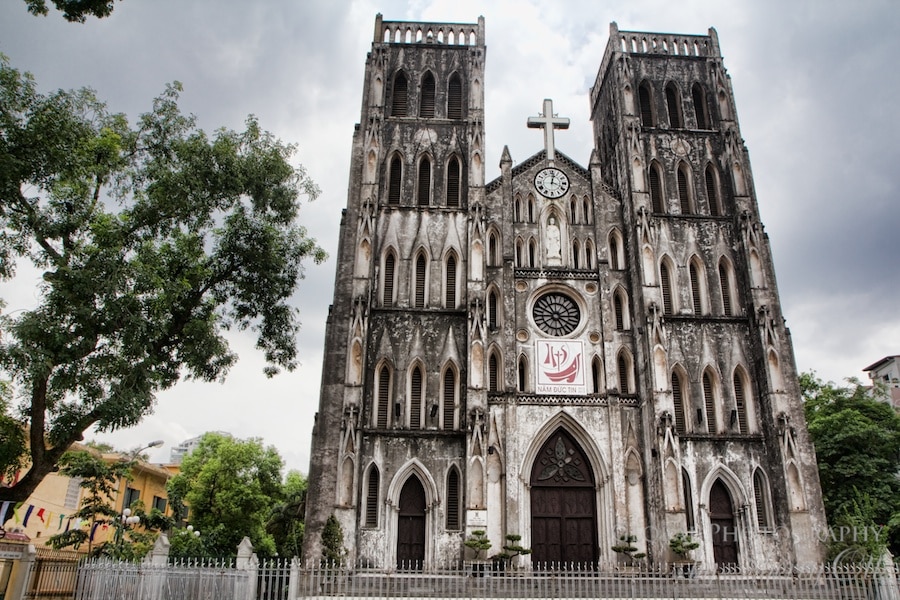 St. Joseph’s Cathedral was closed for visitors, and only open for Sunday during mass for viewing.

The rest of the day went slightly downhill from there. I was reminded of how hard it is to live and travel in a less developed country again. Out of the 3 places we wanted to go â only one ended up being open. And of course, all of them took much longer than planned to find walking around in the boiling heat. Walking on the streets in Vietnam is hard â very hard â there is no real functional sidewalk as itâs taken up with motorbikes, construction, little plastic chairs, and food vendors â forcing you to walk out on the street with the traffic. Something we would never normally do in the US â but itâs a necessity if you want to get around Vietnam. 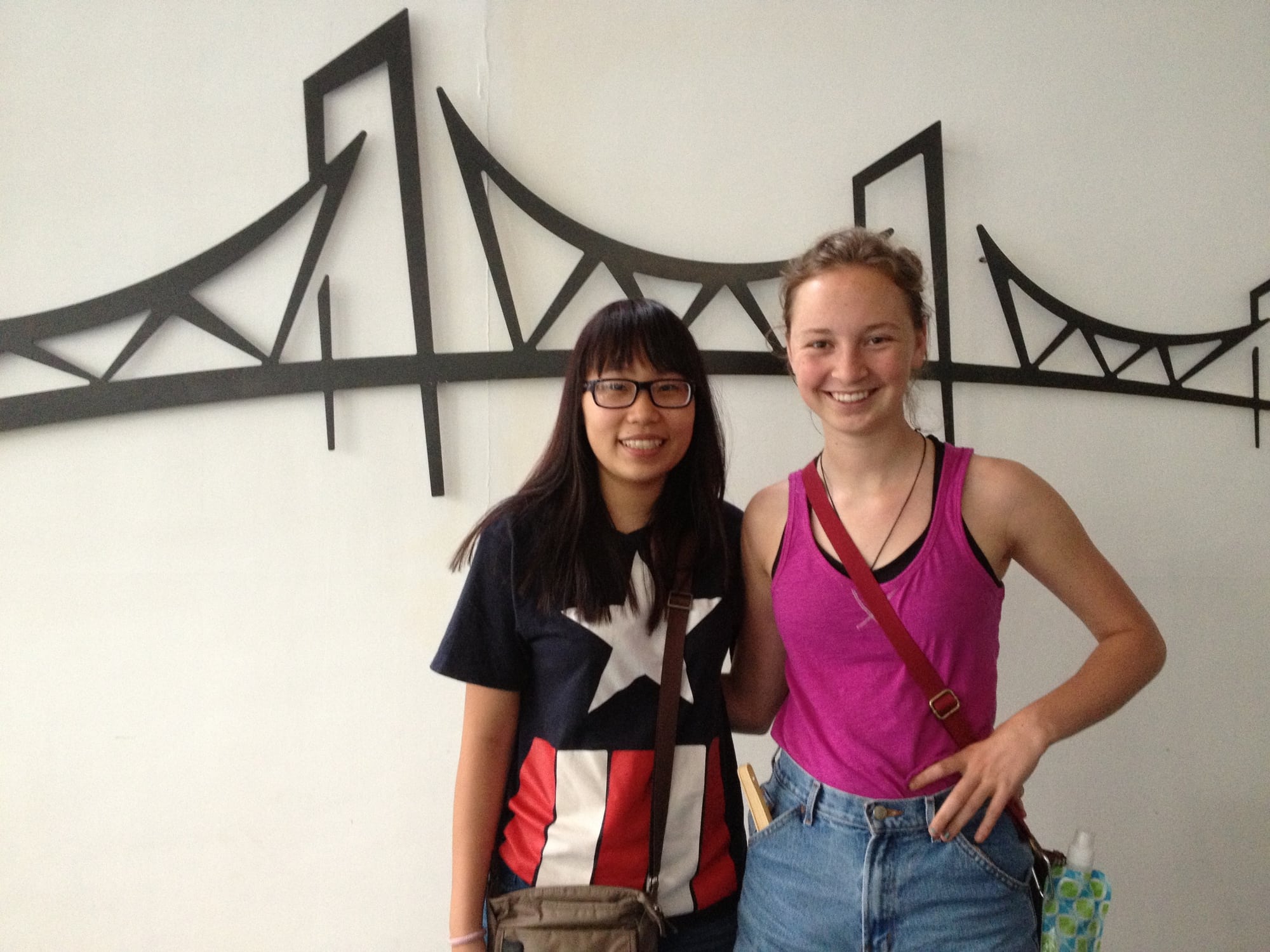 Evie and Huyen meet in Hanoi!

After a delicious lunch of Bun Cha and juice and a good rainstorm, we did something that even surprised me â we met one of Evieâs high school friends in Hanoi for coffee. Huyen is Vietnamese and grew up in Hanoi, yet somehow she found her way to Lincoln, Nebraska for American high school. She was back home in Hanoi for summer break. I think all 3 of us were pretty excited to be having such a meetup in such an unusual place. I was pretty sure that Huyen never really expected to see any of her Nebraska high school friends in her hometown. For me, watching Evie and Huyen interact in a little Vietnamese coffee shop with the whirr of motorbikes and horns going on around us was fun to see. It was as if two worlds were colliding that neither would have ever expected. For a moment â I felt that special tingle of the power of travel â the discovery, the learning, understanding, and friendship that is created when you start to move about the world.

The next day we met up with our Intrepid tour group who we would be spending the next 12 days with and I breathed a slight sigh of relief as I no longer had to lead and could sit back and follow a bit. One of the great things about going on a small group tour is that Evie was not only going to be exposed to one culture â Vietnam â but the other people traveling with us were also a new experience to her. We only had one other family of 4 traveling with us from Australia. Kristy, Kim, and kids Dariel, and Will â were a laid back family from Brisbane. The kids were quite a bit younger than Evie â but they were quite mature travelers. I always love to see how families interact in other cultures too â Iâm a sponge just taking in whatâs around me normally and I hoped that Evie found this as fascinating as I did.

With our Intrepid guide Ngoc leading the way we were much more successful at getting around Hanoi, finding the sites, and good restaurants than we were the previous day on our own. Plus – he was able to answer all of our questions about “Why, What, When?” We did some of the classic Hanoi sites such as the Ho Chi Minh Mausoleum, a cyclo ride, and a water puppet show. Most of which I had done before on my previous travels to Hanoi, but having Evie with me made it more fun the 2nd time around. 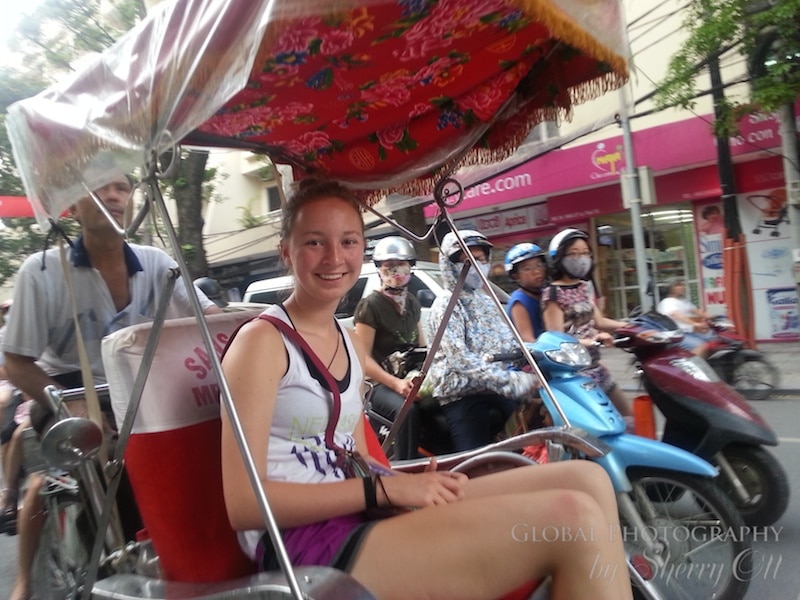 Evie in traffic in her cyclo 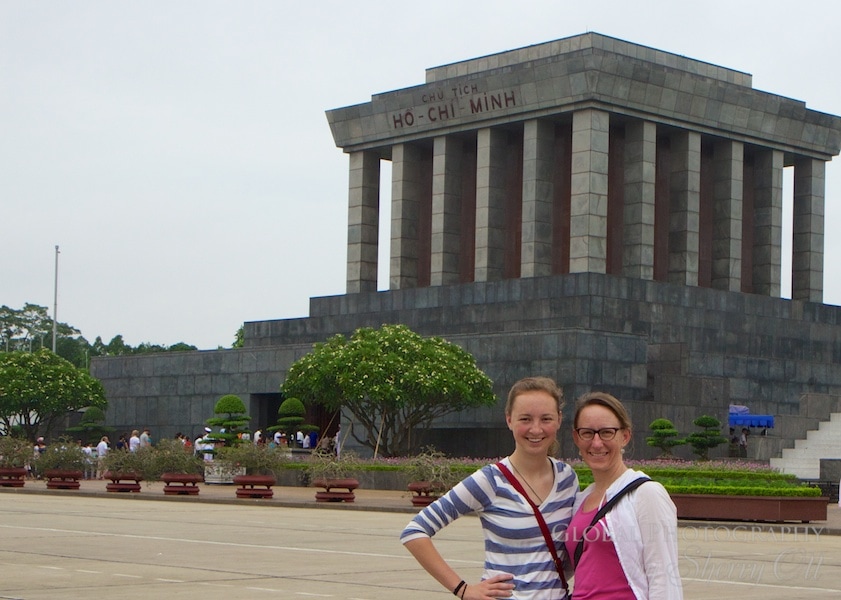 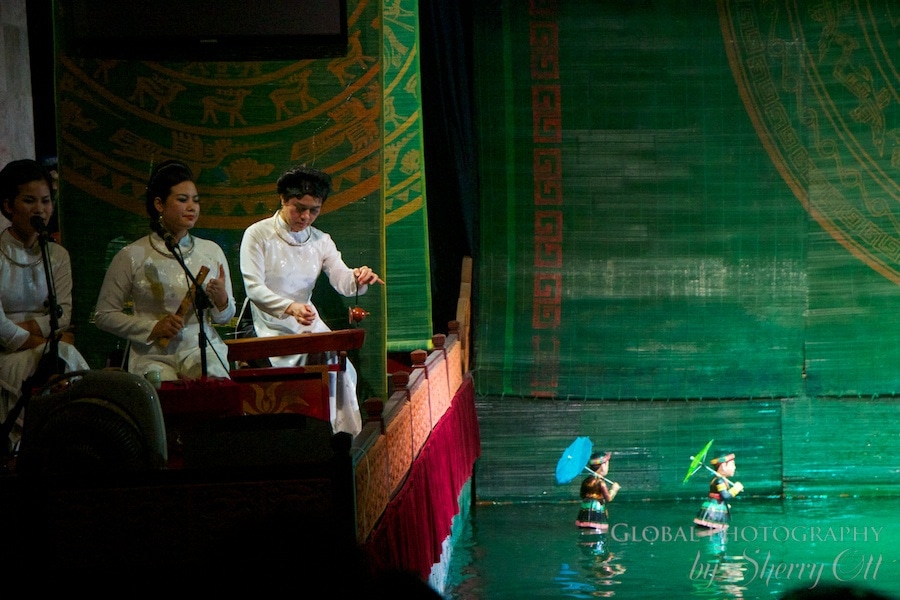 Hanoi Water Puppet Show. My 2nd time to see this, and I still fell asleep for a portion of it!

We had gotten past the jet lag and I no longer had to make Evie stay up until 10PM, and we had gotten past the initial culture and temperature shock those first few days by trying to find things that were familiar but also asking a lot of questions of Ngoc. This is the time that my travel âmusclesâ really start humming – now we could really sit back and enjoy the trip – and the food!

15 Responses to "Finding our Stride in Hanoi"