A Stitch in Time – Hoi An

View snapshots of Hoi An 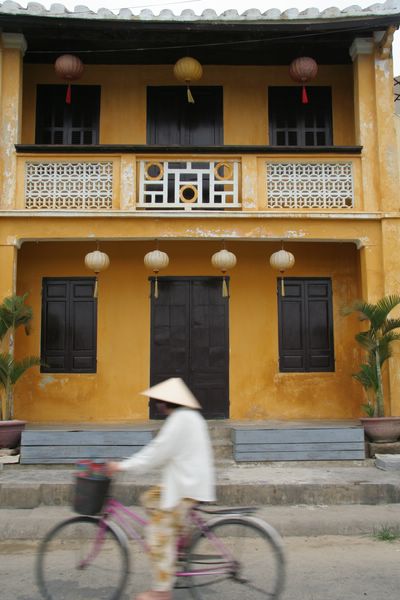 I have been a clothes hound my whole life. I still remember my favorite outfits from when I was a little girl (the blue holly hobby top). My mom used to sew me outfits, yet she never passed that sewing skill on to me – I preferred to simply shop for my clothes in the mall! Clothes have always been memorable to me. I like to play this game with my nieces where they model clothes and shoes from my closet and I tell them what city and store I bought it from. So when we pulled into Hoi An – the tailoring capital of Vietnam (and maybe SE Asia) – I felt like I had come to the promised land! Hoi An was a small town along the South China Sea that was saved from any destruction during various war times. Its mix of Japanese, Chinese, and Vietnamese architecture is still in tact in the ‘old Town’ area. The old temples have been preserved well and made a into historical sites. Hoi An used to be a big trading port, but once the water level on the river became to shallow, no more trading ships could pass through and it settled into being a cute little town. The tourists found it’s intact architecture and boom – it turned into a tourist town. The other draw, other than the old buildings and quaint feel, is its shopping. Master tailors abound in this town. There’s a tailor shop about every other building. They range from cheaper quality to high end – all pretty much family run. They can copy all of the latest styles from magazines, just pick out your fabric and one day later you can have a red carpet dress!

Photo: Bikes parked on the sidewalk

I decided that I had some room in my bag for some purchases. I felt that there are a couple of items that are a must for custom tailoring – wedding dresses and suits. Since I had no plan to be married anytime soon, and I eventually will have to find a job again one day – I decided upon a custom tailored suit. Huong recommended one of the higher end stores, Yaly, for suit tailoring. They had stacks of magazines to look through along with various examples made up. Once you decided upon a style then you had to pick fabric. Suit fabric was fairly easy to choose. However, I developed a new found respect for people in clothing design – it’s not easy! You really need to understand fabric quality in relation to the style/pattern you are making. Luckily the little Vietnamese woman, Natasa, who was helping me assisted me with these big choices. She was kind of like my Tim Gunn of Project Runway – I should have told her how to say “Make it work” – she would have been a hit! Then the measurements began – on every possible part of your body! You have the opportunity to make decisions on button placement, pockets, pant cuffs, etc. I never knew that so much went into making clothes. After the measurements she took a picture of me and told me to come back for my fitting tomorrow around noon. They must sew all through the night like little elves at a workshop. I picked out a suit, some pants, and a skirt and set up my fitting for the next day. I walked around that day and decided to try a couple of the other tailors too. After all, when will I ever get the chance to get clothes tailored at this price again!

Photo: Streets of Hoi An

My next two days were filled with fitting appointments. My calendar was starting to resemble my old meeting schedule in Corporate America! I would go try on the clothes and soon I was surrounded by a swarm of tailors that came to my shoulder. They were pinning, tucking, and hemming. I looked in the mirror and little smile came across my face as I saw all of the activity going on around me. It takes you back to being a young girl and living out that dream of being a princess. Having people flit around you making sure that you look just right before going to the big ball. I think every girl has that fantasy – and then it manifests itself into those little girls growing up and having huge, overblown weddings just so they can feel like a princess and live out that dream. I am happy with my choice to forgo the wedding and simply have Vietnamese tailors help me live out my dream instead – it’s much less of a headache in the long run! Some of the tailors I had to return back to 3 times to get it just right. They were way more meticulous than I ever would’ve been. In the end – the pants fit perfectly to my body. Damn – I could get used to this!

During my final fitting at one of the tailors, the woman who I had been working with said that all of the girls here were envious of my long legs.
“My legs???” I said in amazement
“Yes, they are so long.” she answered

This made me burst out in laughter much to her confusion. This perfectly proportioned, petite, Vietnamese women was envious of my amazon-like legs! I guess this just proves once again that the grass is always greener – even in Vietnam.

Lest you think that all I did was shop – I did visit the historical sites as the town was very interesting and photogenic. It was a regular functioning little town with markets and many locals buzzing around. I got up early one morning, armed with my camera, and I went snapping all over town. I ended up wandering through the market – as markets are always busy in the morning and you get to see the locals shop. As I walked through the crowded market I would push my way through people and suddenly you would hear a horn blaring behind you as a motorbike would try to squeeze through a non-existent space. I’m not once to mess with a motorbike so I slide my body in closer to the masses of people as if they were a love-interest of mine – a common situation in Asia. Say goodbye to personal space. I notice a bit of a clearing to my left towards the river so I try to edge my way to the space where I can breath and take out my camera. As I do this I notice a mass of conical hats by the river so I go closer to get a good look at all of the people. I notice that many of the women are rolling up their pants legs before the enter the crowd. I also notice that the air is thick…really thick and humid. My camera lens was all fogged up and I could never really get it unfogged – the air was heavy. I stepped in to throngs of women carrying baskets of fish. I had wandered into the fish market. This wasn’t just a market – it was a sort of wholesaler as this is where the fish came off the boat. I tried to find a small space where I could observe and be out of the way but I was jostled on all sides with women pushing past me with fish. I held on to my space firmly as I am a good 6 inches taller than them and have at least 30 lbs on most of them – but these fish ladies are scrappy. In fact, as I stand and observe I start to feel like I’m watching the Sopranos. It was like a female fish mob. Women ran this market, the men may be the fishers, but the woman ruled the transactions. There was wads of money being exchanged in groups, they were all yelling at each other.

“The grouper is 10,000 dong a kilo.”
“But Godmother – the price is so high – all I have is this water spinach that I picked by the side of the road – how will I feed my children? Please Godmother, have pity.”
“Fine, I’ll do you this favor once, you can have the fish in exchange for the spinach – but you will remember this favor.”
“yes Godmother”

Photo: The Godmother (not wearing the hat)

Ok – so when you don’t know the language you can create your own conversations – these are the things I do for fun.

A boat pulls up on the dock and there is a scurry of conical hats rushing it. Baskets of fish are unloaded on to the dock and the Godmother starts distributing it out again yelling orders with a fist of dong in her hand. I was intimidated by this 5 ft. tall woman. She would sell to women (presumably her captains) and they would turn around and sell to others a few feet away in their corner.

These women wore conical hats, smoked cigars, and had their pants rolled up above their knees and tucked into their knickers….they were rough. I hung out there watching the fish mob for about 30 minutes. Even though I was clearly the only Caucasian person there and the only one taking pictures, they completely left me alone – I was like a pillar that was simply in their way. Then again if one of them yelled obscenities at me – I wouldn’t have had a clue…sometimes ignorance is bliss.

While we were in Hoi An we also took the opportunity to enroll in a cooking class. We had been eating this delectable food for the last 3 weeks – now we needed to learn how to make it. All you really need it a skillet, some chopsticks, and a bunson burner and you can whip up a feast!

We went to the market as part of our class and learned how to pick out the right vegetables, and fish. Our instructor was amazed when I said – I’ve never bought a whole fish before – and I think the guys at Fairway would look at me pretty funny if I asked to look the fish in the eyes to inspect it’s freshness. We made 5 different dishes on that little bunson burner and enjoyed them all! I had never cooked with chopsticks – but it was pretty easy once you got the hang of it. In fact – they taught us a great trick on how to test the oil’s temperature with wooden chopsticks. So now I have added another cuisine to my potential list of dinner parties when I get back to the US!

I left Hoi An with a new wardrobe, better cooking skills, and a new appreciation for the women of the fish market. This is one town that no one should miss!