Iâm not sure how it happened, but Iâve become one of them. I wear a jacket (which Iâm boiling in), a mask, a poncho, â¦.Iâm a Vietnamese motorbike driver. Iâve become used to being squeezed into small places and driving through them. I can drive really slow and coast while keeping my balance. I can drive through flooded streets with my feet up on my seat so that my feet wonât get wet while still balancing the bike. I can dodge slow pedestrians. I can maneuver the bike into the narrowest parking spaces in alleys. I have learned how to honk to simply let someone know Iâm âhereâ. In fact, I use my mirrors less and less and my horn more and more. Seriously â how the hell did this happen? I so vividly remember my first time I took the bike out of the living room and accelerated into this crazy motorbike culture scared to death.

Iâm absolutely convinced I will have to retrain my brain to look left before turning right again as I donât even get the urge to look left any longer. Iâve learned that you donât wait for opportunities (for a lull in traffic) when driving in Vietnam, you make opportunities. 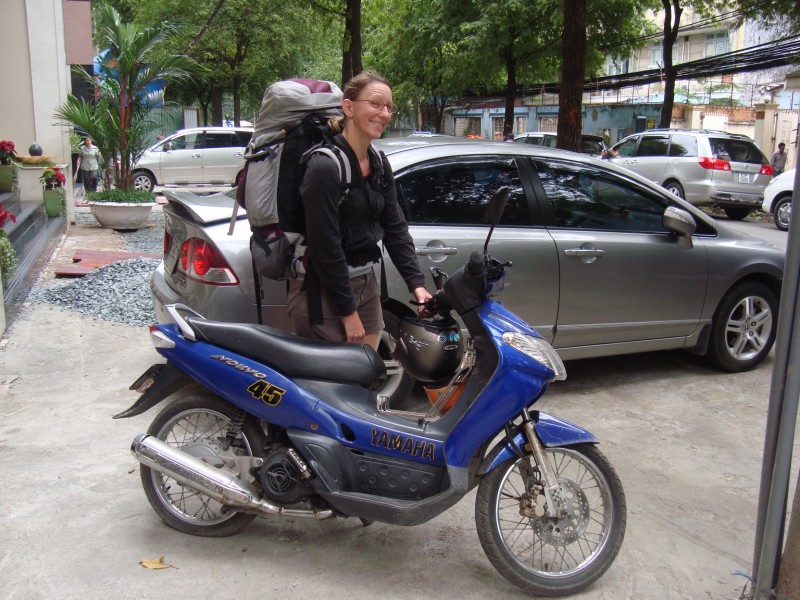 Me and my motorbike - and one flat tire...

Six months have gone by and now Iâm able to do what I previously thought was impossible; I zone out. I actually look at stuff around me, notice new restaurants, can read street signs, and most of all I use the driving time to think. Iâve even been able to zone out the horns that are constantly honking at me. Nor am I shocked or horrified by what I see around me any longer â 4 people on a motorbike, a guy carrying a refrigerator on the back of his bike, a dog on the bike, or a boy standing on a bike seat behind the driver â yes, standing. However a boy sleeping between his parents on a motorbike in the pouring rain did catch my attention for a bit the other day. I think I was simply jealous of his ability to sleep in a impossible environment.

Last week I was so zoned out that I didnât notice the broken glass that I ran over until it was too late â 2 flat tiresâ¦yes, 2. I pushed my bike to a corner that had a tire tube propped up on it (the Vietnamese symbol for tire fixer nearby) and 10 minutes and 75 cents later the guy had fixed the holes and I was off.

I find that I still do have a couple of âlimitsâ on what I wonât do. I wonât drive on a sidewalk; it pisses me off when other people do it while Iâm trying to walk down the street, so I wonât be one of those people.Â I wonât go the wrong way down a one way street. (My high school driver-ed teacher would be so proud of me) I wonât carry a refrigerator, a flat screen TV or a computer on the back of my bike! However just recently I did find myself carrying a 30 lb backpack on my bike driving through flooded streets praying that I wouldnât lose my balance. Finally, I wonât wear flip flops while driving as Iâm too scared to lose one of them! I canât tell you how many flip flops and sandals I see in the middle of the street; deposited there accidentally, never to see itâs other half again.

The most stunning thing is that I know it is my motorbike that I will miss the most out of everything in Vietnam. It is the thing that scared me the most and the thing that I loved the most about my time in Vietnam; which goes to show you â Iâm completely dysfunctional. Learning to ride in Saigon was one of my goals, and even though it took me 5 months to get up the nerve to try and then 2 more weeks to actually take it out of my living room and put the key in the ignition; I conquered the fear, and for that Iâm immensely thankful.
Video of my taking off on my bike after my flat tire was fixed.

Follow my motorbike journey from the beginning with the Motorbike Diaries Vol. 1 â Learning How to Drive a Motorbike in Vietnam

Get your own Vietnam Motorbike License and get out on the streets!