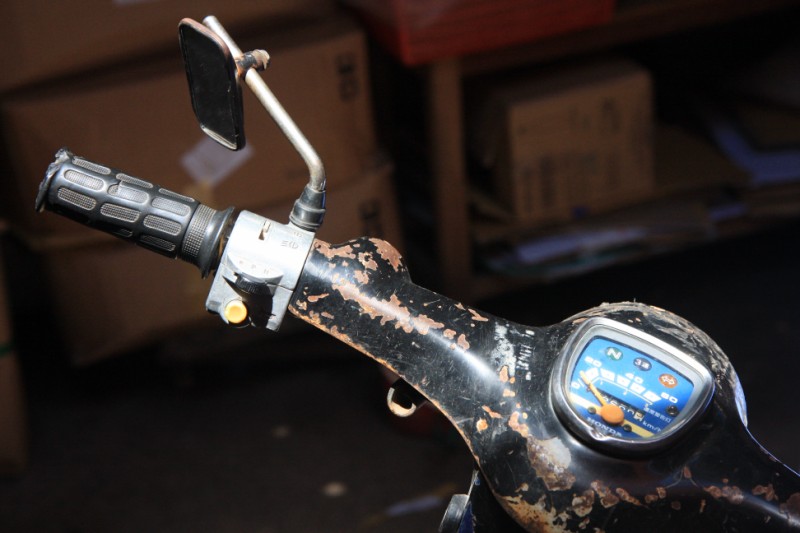 Itâs the weekend and that means that itâs time to get on my motorbike again and join the sea of 2 wheels. Iâd like to say that it was easier this time, but I donât know that it was. It was a good practice session though and I was able to accomplish a few âfirstsâ which is always important!

I drove it to a restaurant and parked it. I know this doesnât sound like rocket science, but you have to understand that for the last 6 months here I have been living a walking lifeâ¦one in which you donât have to park. Just consider the fact when you live in NYC and donât own a car, you have no idea where the gas stations are because itâs not something you utilizeâ¦ever. So, figuring out parking was just a new adventure.

For most restaurants and shops parking is simply on the sidewalk , and itâs sort of valet parking in a way. Every shop/restaurant has a guy who is paid to sit out front and watch motorbikes and organize the parking. You pull up on the curb (first you must find the part of the curb that you can pull up onto (a ramp of sorts), you drive down the sidewalk and stop in front of the shop, get off, and the parking guy comes over from eating his Pho and gives you a ticket with a number. The parking guy then writes the number on your seat in some white crayon substance and he then takes the bike. You leave your helmet there with the bike. All easyâ¦but a bit intimidating the first time. I actually have a friend who tried to pull up on the curb once without a ramp and ran into the window of the establishment! See â thereâs always something that can go wrong!

My second rookie adventure was to actually drive through a traffic circle. Donât roll your eyesâ¦just look at this video.

Buses, cars, motorbikes, bicycles, and pedestrians all merge..terror! I didnât take the easy route, I never do, so I went to the busiest traffic circle in front of Ben Thanh Market. As I arrived, I took a deep breath, put my left thumb poised on the horn button and my remaining fingers on the breakâ¦and jumped in! I made it â I actually got in and got out without having to circle the round-about again! 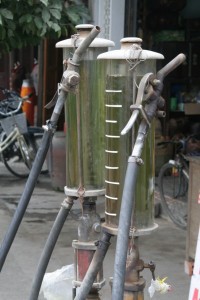 My last act of courage was to find a gas station and fill up the tank. They donât have self serve here. In fact, like most things the gas station is rather chaotic â no real queuing, just push your way up front, flash some Dong, and hopefully you will get served. One would think that I would be great at this considering this skill was a necessity in NYC in order to get a drink at a busy bar. Â WaveÂ a $20 around and try to show cleavage and hope the bartender was straight. (for all of my friends who are laughing right nowâ¦yes, I know I embellished on the cleavageâ¦but canât you let me dream?)

Even though I was good at this skill in NYC bars, I wasnât riding up on a motorbike trying to get the bartenders attention â soÂ getting theÂ gas station attendants attentionÂ was harder than it seemed. Plus, Iâm still not the best at a nice even acceleration from a stop; Iâm still getting used to the throttle and trying to get rid of the jerkiness that ensues. Inching up in between masses of motorbikes require a little more finesse than what I have right nowâ¦and donât even get me started about the art of backing up!Â He filled up my little tank for 31,000 Dongâ¦I have no idea if this is a good price or a bad priceâ¦or even the right price â I just paid it and got out of there trying not to run over anyoneâs foot!

After the gas station stop, I drove out to one of my friendâs house in another district and made it out there at my granny pace. I was relieved to still be in one piece and I was drenched with sweat due to the mid day sun. Motorbikes donât have air conditioning! I survived all of my rookie maneuvers, feeling slightly more comfortable with life on a bike, but I still have a ways to go!