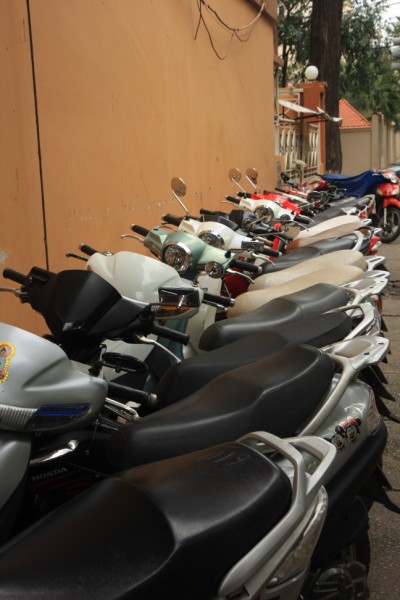 Obstacles. Today was the day, the day I was supposed to take the motorbike out and practice. Yet from the moment I stepped outside today I had obstacles in my way. In my little alleyway that leads to my apartment were about 15 parked motorbikes. Somehow the two that are normally out there reproduced over night. Luckily my motorbike didnât reproduce in my living room as there would be absolutely no more space in my narrow little apartment. Thank God for birth control.

This mass motorbike reproduction posed a problem for my weekend practice plans; I didnât really have a good way to get the bike out! Granted â I could have gone over and mimed to the neighbors (who donât speak English) that I needed the other bikes moved and they would have happily helped me and the problem would have been solved. However in my massive neurosis about driving a motorbike, I had somehow envisioned that I would be able to quietly sneak out of my little alley without people noticing, and without calling any attention to myself. Donât ask me why I wanted thisâ¦I just did. I wanted to be invisible. Asking people to move bikes and then having to push my bike past a whole wedding party was not the attention that I wanted.

So I waited. I worked instead and decided that I would go out later in the afternoon when all of the commotion had calmed down in the alley. Plan B sounded good; wait and work.

While I was waiting and working, I heard itâ¦the deep rumble of thunder.

Soon the skies opened up and the rains came downâ¦.for hours and hours. My afternoon practice was rained out. If you simply think that I’m being a wimp about melting in the rain – check this video of Saigon motorbikes in the rain from Backpacking Teacher, another teacher and blogger around here.Â  Mother Nature apparently doesnât want me to learn to drive a motorbike.

Plan C â wait and work and go out around 10PM when the rain would be over, the streets dry, and the traffic would be very minimal. HCMC pretty much closes up around 10PM at night, so itâs a good time to practice.

I had dinner, waited and watched some tv. I thought about just giving up for the day. The devil on my shoulder was telling me to forget it. My fear was winning â or maybe it was just tired. As I watched the Pursuit of Happyness I listened to Wil Smithâs character lecture his young son, âNever let someone tell you that you canât do something.â

I let that sink in, brushed the devil off my shoulder. I put my medical insurance card in the front of my wallet, and I was ready to get over my fear. My fear was not going to tell me that I canât do something.

It was about 9:30PM, I asked the neighbor to move his bike in my best charades, I got the very heavy bike out of my living room and into the alley, and I pushed it past the neighbors – I was feeling brave. I pushed it to a wider part of the alley where I could start it. Put on my helmet, kickstand up, key in ignition, push starter buttonâ¦MMMmmmmmMMMMMmmmmMMMMMmmmmMMMMMMmmmm.

There was no nice, even roar of the engine ready to take on the open road.

What a crap day. No fears conquered, no practice â just obstacles.

Liked what you read? Â Then keep reading!