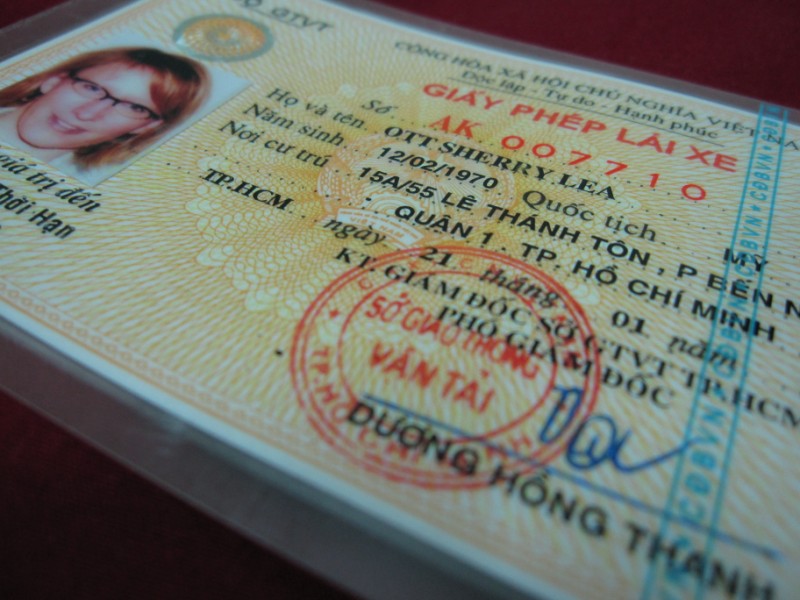 My motorbike license recently arrived proving that bribing officials here actually works. See, you learn something new every day in Vietnam. Of course the whole license is in Vietnamese and I canât read a thing but my name. For all I know the rest could say âSucker! This rich foreigner thinks this is a real license. Take her bike and demand more money.â

Note to selfâ¦have someone translate license.

The license arrived just in time because the gossip traveling through the expat community in HCMC is the police are ‘cracking down’ on foreign drivers. I find that slightly disturbing since I think that we, foreign drivers, are probably some of the safest drivers in the city compared to the locals. Most of the time I find Iâm the only one waiting at a red light, while everyone zips by me with their horns blaring totally ignoring the stop light. I still have a hard time blatantly ignoring stop lights; too many years of conditioning I guess. 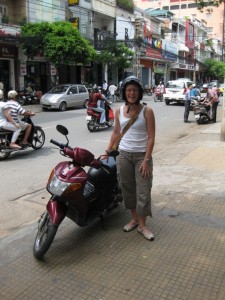 See, I actually do take it out of my living room!

The good news is that Iâm getting into the groove with the motorbike. Iâve improved in many ways. Iâve listed my top accomplishments in the last few weeks. Sure, they might seem trivial, but trust me, these arenât trivial things to me; these are major accomplishments!

1. I can get it in and out of my apartment myself now without one of my neighbors having to help me.
2. I am no longer the slowest person on the road, Iâve learned that speeding up is actually a good thing. Aggressive driving here is key. In fact, Iâm fascinated by the fact that the Vietnamese are never really in a hurry. My old driving instincts have resurfaced and I find that I get annoyed with slow drivers just looking around.
3. I have conquered the rainâ¦ok â Iâm embellishing a bit, it wasnât a huge storm, but it did require me to pull over to the side, get out my purple rain poncho from under my seat and become one of the masses driving a motorbike in a rain poncho.
4. Iâve learned how to drive up a curb under control. Basically this means that Iâve learned how to park on the sidewalk which is a necessity here. This requires going up on the curb which sounds easy, but when you still arenât very sure of your throttle control, itâs a bit stressful! Iâm always worried that Iâm going to âgun itâ too much and go straight through the glass window in front of me!
5. Iâve become one with my horn! Yup, thatâs right, if you are going to drive any type of vehicle in Asia, you have to learn how to use your horn. The horn is your way to communicate â mine normally says âumâ¦hello, Iâm trying to merge through the traffic circleâ, or âhowdy, just want to let you know that Iâm on your left in your blindspot so please donât run over meâ, or âdonât even think about pulling out in front of me.â, or finally âHEY! Get out of my fâing way!â.
6. Iâve learned how to do the Vietnamese right turnâ¦itâs actually quite easy. You donât signal, you donât slow down, you donât look; instead, you simply act as if you are the only person on the road and you just turn without any checking or hesitation. This is also how you generally turn onto the road from a driveway or sidewalk too.
7. Iâve learned (maybe attempted is a better word!) how to drive at rush hour at night and quite frankly, itâs terrifying! Especially when you have to go through traffic circles and dodge buses. You end up walking on your bike for most of the time while sucking up noxious fumes = no fun.

1. Driving a passenger on my bike. I actually practiced this last weekend. I had a friend that was crazy enough to let me try this. Her thought was that I would be safer to ride with than the localsâ¦Iâm not too sure about that, but I was honored that she thought so! We went to a secluded district and practiced. It was quite different as the balance on the bike was drastically different to get used to and I found that it took longer to stop the bike (my college physics still do come in handy once in a while)! Toting around passengers will definitely need some more practice before Iâm ready to do it in the heart of the city!
2. Left turns still are still a challenge to me. Granted, Iâm improving, but I still have a ways to go. Left turns are easy if you have a posse of motorbikes to turn left with. Then I nicely tuck into the posse as if I belong there and go with them letting them pull out first and stop the traffic. Yes, Iâm using themâ¦but you would too in this situation. When you donât have a posse, then it gets infinitely harder. That requires me to go out alone and try to inch across oncoming traffic. There are not âturn signalsâ (nor are there turn lanes) here that keep the traffic stopped while a group of people turn left. Nope, you are on your ownâ¦you turn left like you cross the street, slowly, slowly. Inch out, and watch the oncoming traffic, inch out some more, inch out some more so that now you are in the middle and the traffic is now going around both sides of you as if you were Moses trying to part the Red Sea and itâs closing in behind you. Keep inching, and finally someone will give you a break and go around the back of you and you can zip across.
3. Trying to read street signs and drive is next to impossible for me. That means that my motorbike riding is still somewhat limited to the places I know how to get to. Trying to find a new place is stressful beyond belief. I still donât know what half of the signs say and thereâs not a âshoulderâ to pull over on and get your map out. Oh, if I only had motorbike GPSâ¦that would be awesome!

I have to admit, everyday Iâm out on the motorbike I wish that I could take all of my blog readers with me to experience it with me. I fantasize about ways that I could duck tape my camera on the front and take video somehow without people trying to steal it! Trust me, if I figure out how to do that, youâll be the first to know! Until then, you just have to take my word for it!

If you want to learn how to get your own Vietnamese motorbike license – then check out this great site – Vietnam Motorbike License!