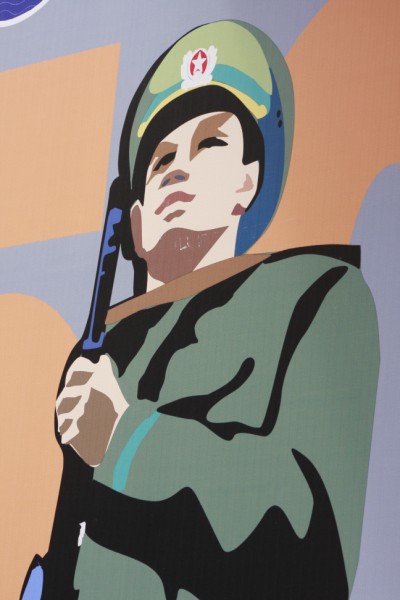 Patience and the Law
I drove over to my favorite cheap eats restaurant in the Backpacker Area in District 1, Lam CafÃ© on Bui Vien Street. When I say cheap eatsâ¦I mean itâ¦I can get lemon grass beef with rice and a mango smoothie for $2 US. Change that smoothie to a beer and itâs $2.25â¦hooray! My driving route to Lamâs takes me through one of the busiest intersections in District 1 â Tran Hung Dao Ave and Nguyen Thai Hoc St.

As I was coming upon this ultra busy intersection, I looked ahead and saw that it was much more of a mess than it normally was. Bikes and cars were backed up everywhere; but it was too late to turn around now. Actually, I lie, you can always turn around in HCMC, there are no rules about flipping a U-turn or driving the wrong way down a street, or driving down a sidewalk for that matter. But I try to avoid these things whenever possible. I feel like Iâm doing my good deed to Vietnamese society by following driving rules and setting a good example. Considering the fact that I seem to be a spectacle out on the road as everyone canât help but stare at me, it seems as if at least I should do something good if I have their attentionâ¦right? Ok â back to the intersection, trouble is looming ahead and I have kept you hangingâ¦

As I slow down and assess the situation I realize that the traffic signal light is out, no power, another common situation here. So, hereâs the ingredients â one cup cars, one quart of motorbikes, Â½ cup of bicycles, a tablespoon of bus, mixed with a bowl of no electricity, spread across the busiest intersection in HCMC District 1. Donât forget to throw in a dash of the standard Asian culture of no personal space or queuing, and a pinch of hornsâ¦and you have a recipe for disaster. 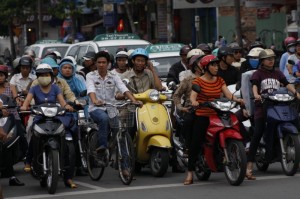 I walked my way through this clusterfuck (sorry, I really have no other word for it) with my bike. I donât mean that I got off my bike and walkedâ¦no, noâ¦thatâs not how you do it here. Instead you walk the bike while still on the bike; this basically means that you inch along with both feet on the ground taking little, slow steps getting nowhere fast. You provide a little throttle when you see a 12 inch space in front of you, and then continue to walk. It took me 15 solid minutes to get through the mess. Of course there wasnât a cop to be seen anywhere, and of course no one was being reasonable about letting people through, instead we all sat there for 5 minutes at 90 degree angles with no one budging. Of course in true form I seemed to be the only person that was annoyed by this mess and by the inhalation of way too much exhaust. The localsâ¦they just slowly inched along taking every centimeter of space they could when it opened up.

After getting through the intersection completely stressed out, I moved on to Lam Cafe. I was sort of trying to decide if $2 lunch was really worth this or not. I happily pulled up to Lam CafÃ©, parked my bike out in front on the street as everyone does and went to sit at a table (there are only 3, so itâs pretty quaint). I go to Lam CafÃ© quite often, so they do know me and welcome me kindly as usual. I order my usual, and start grading papersâ¦my usual routine.

I look up and a few more people pull up and park their bikes and come inside. Thirty seconds later I look up from my coconut smoothie and English papers to see that 6 cops have pulled up on motorbikes and are looking at the motorbikes in front of Lamâs. Hmmm â I decide not to get alarmed, after all, I just made it through the intersection from hell; really, could anything else be that bad? The owners of Lam came out and started talking to the police. This quickly turned to shouting (or at least it seemed as if they were shouting – but itâs hard to decipher when itâs in another language!) Everyone huddled around the 3 motorbikes, yelling, motioningâ¦I kept grading papers keeping one eye on my bike and trying to be calm about whatever was happening that clearly had to do with the bikes. The other two customers came out to see what was happening and they ended up leavingâ¦.not a good sign. 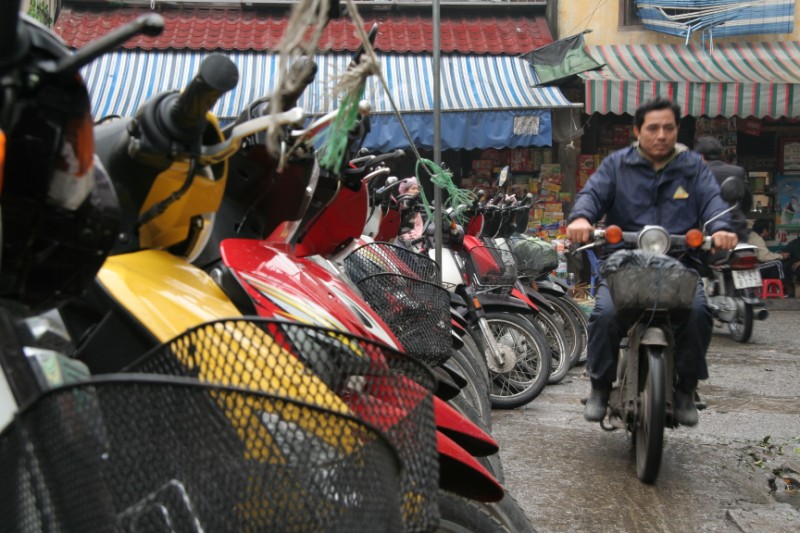 Motorbikes parked on the street

A part of me was really pissed off. Why werenât these cops out directing the clusterfuck intersection that I just walked through? The intersection was only 2 blocks from Lam CafÃ©. After all, there were 6 of them, did they all need to be here harassing the people of Lam CafÃ©? Then again, harassing people would be much easier than trying to clear up the mess I suppose. As the yelling continued, the law eventually won and I saw the mother bring out money and pay the cops. I tried to ask one of the daughters what was happening. She explained in broken English that itâs illegal to park along the street, so they were fined. I felt terrible. But seriouslyâ¦everyone parks on the street on Bui Vien. Itâs as common as having rice with a meal, or ants in your kitchen. I absolutely couldnât believe that the police were deciding to enforce this instead of all of the other true âwrongsâ that happen in the city – such as driving on the sidewalk, running stop lights, not giving pedestrians the right of way, people driving without helmets, driving the wrong way down streets, turning right from the left laneâ¦seriously â I could go on and on.

The owners of Lam moved one of their 3 tables off the sidewalk and place it inside, then they moved my bike up on the sidewalk, where itâs apparently legal to park. Yup, you read that right. Sidewalks arenât there for pedestrians to walk, they are for parking motorbikes; this makes complete sense. Then again, not many things make sense here, itâs Vietnam after all. It doesnât pay to waste effort on trying to make sense of some of it, you just have to accept. This is one of the greatest skills I have learned in all of my worldly travels and living abroad in Vietnam; donât question, donât get upset â just accept. Patience is not something that we Americans have; yet itâs required here to survive. I think this is one of the reasons why I blogâ¦to let out all of the frustrations that build up in my patience bank during the week!

I finished my yummy lunch and paid my $2. I tried to give the owners some money for the fine, but they wouldnât think of accepting it. The young boy just said âJust come back again.â Done.